on September 02, 2021
This review is based on the final retail version of the game provided to us by the designer and publisher. We were not paid for this review. We give a general overview of the gameplay and so not all of the mechanical aspects of the game may be mentioned. 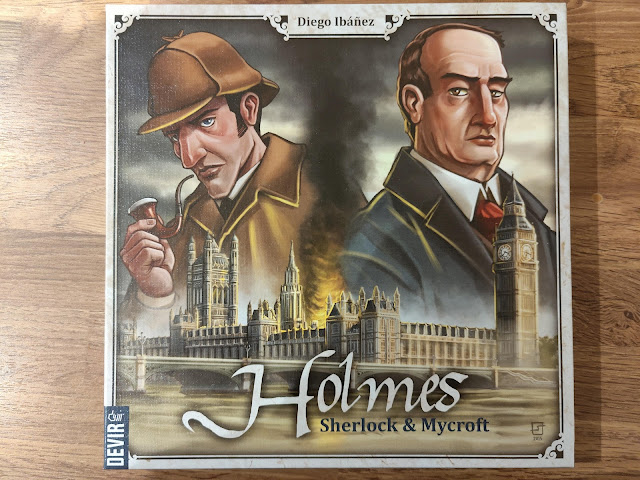 A hundred yard stare. That's what you notice. It's only for the briefest period of time, but if you could look behind the eyes then you would see what looks like things clicking into place, like a sideways cutaway diagram of a key sliding into a lock with all the clues aligning to give the final answer. The solution to the case. You feel like while their eyes are staying still, the eyes are taking everything in, missing nothing. So help you if you've said something out of place, or sat the wrong way, or tried to swallow down those guilty thoughts. A hundred yard stare, into the very depths of what will make you declare your guilt. So breathe in gently and wait for them to finish their thoughts. You know you're not guilty, you're not even capable of such a deed unless it was something that really needed doing. So stare back and let them take the measure of you. Let them look. Someone has bombed the Houses of Parliament. So let them take all the time in the world. 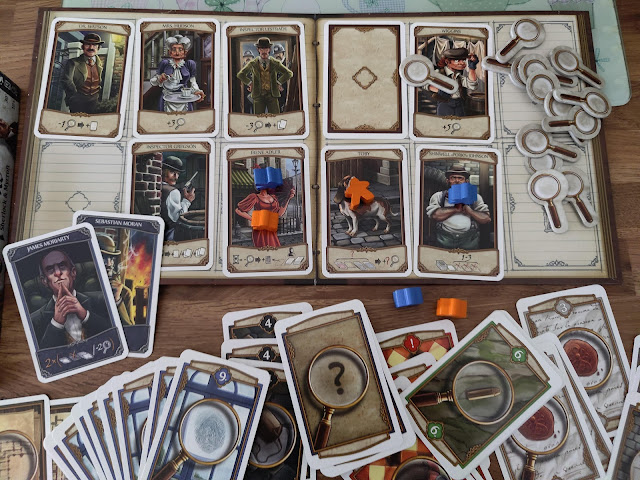 Nothing is said for the longest time. But you know that even your presence in this room, in this street is enough to make them hunker down like they are waiting for the starting gun to fire. They do so love to race. So you decide to go visiting to gather information. Not too many people as to cause questions but enough to make sure the job can be done. Could be favours for favours but sometimes under duress. It's always worthwhile knowing who is out there that you can squeeze for information. People talk of money being currency, but that only pays for the bread. The right information can make sure that you're deciding what the Baker bakes. Speak to the right people and you might be able to gather some investigation markers that in turn can be exchanged for clues themselves. 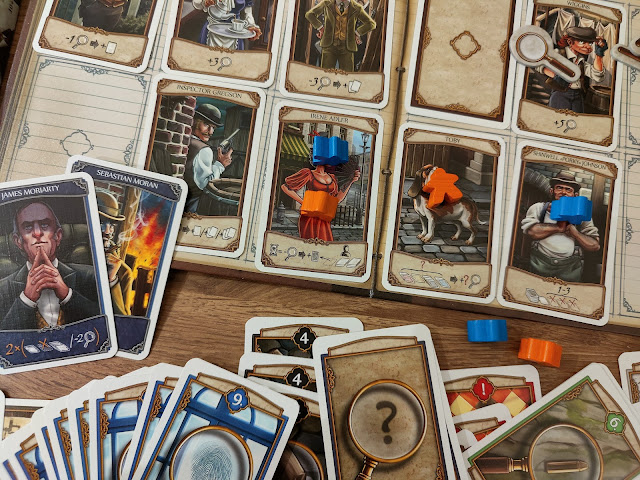 Ideally you want this all wrapped up. There's only so long you can spend in each others company before you want to quite rightly claw each others eyes out. Brotherly love was never something that rang true in the Holmes household. Brotherly oneupmanship was something that was almost a tradition and yes, while there is someone's freedom at stake, you're not entirely immune to the temptation of bragging rights for the next couple of centuries. So you bid you farewells and promise to return the following day, with the hope that things will all be put to bed within the weeks end. The sun rises and with it the rumour that The Lady has returned to London, which will hopefully turn heads as well as muddle them. A brief exchange of information suggests that your brother has already visited and fearing the information you get will be tainted, you suggest returning again the next day, only to find that she has tired of you attempts at intellect and will only see you after she has had time to refresh and rewind, much to your annoyance. In fact as the days progress and more informants surface from the murky depths of the underground, it's apparent that no one is interested in a repeat visit from the Holmes boys and won't chat again until at least a day has passed. 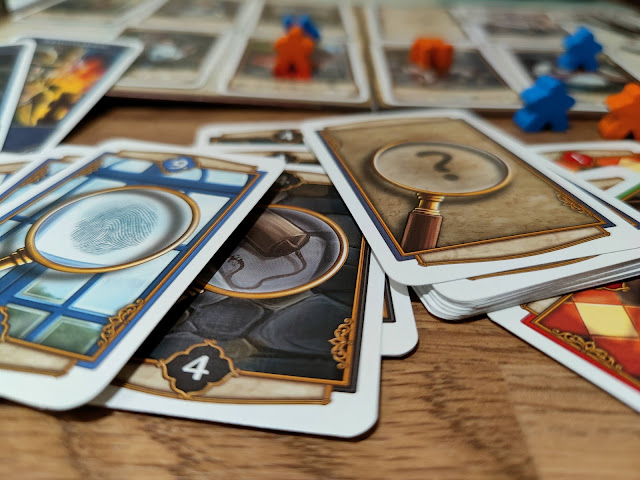 Some clues can be read like a poster for a circus, bright and obvious, while others refuse to reveal their secrets until the very end of the investigation, where their part in this debacle will be revealed. Whilst hidden clues might mean out of sight, it rarely means out of mind. Even though your brother does enjoy to spar with you, using his insight and intelligence like a sword, sometimes his need for the theatrical gets the better of him, and that gives you the chance steal clues they've gathered and add them to your own investigations. All this time the clock is ticking and a man sits in a cell waiting to be either vindicated or punished and all on your watch. 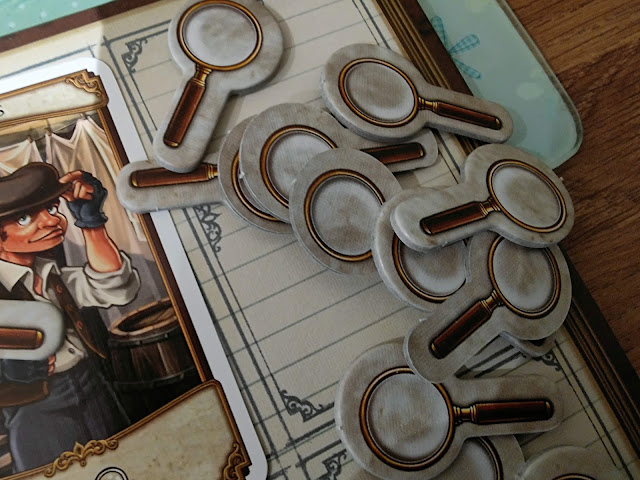 By the end of the seventh day, you gather for the last time and over a tray of biscuits and refills of tea from Mrs. Hudson, you compare and contrast what you have found. Clues have a funny way of growing stronger with knowledge and those who have collected the most clues of a type will gain the advantage of knowing what the clue means towards their own case. In fact, gaining all of the clues in a group is guaranteed to not only put you very far ahead but also allow a cackle of triumph, much to your brother's distaste. There are risks to gathering clues with higher numbers but they put you in the more likely position that you will win in the long term. Collecting bigger clues will lead you to higher points and therefore the smug satisfaction of once again proving that while your brother may be the bigger name. He should maybe just stick to playing the violin and wearing his silly hat, because set collection clearly isn't his bag. 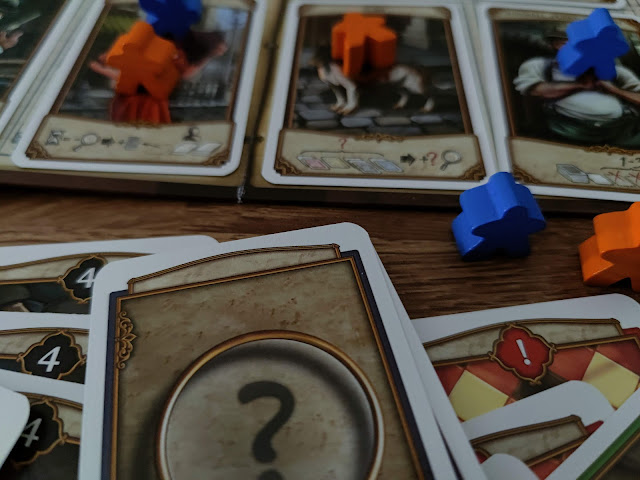 This is where we have to break from the narrative. You see, while HSAM contains all the characters that you know and love from the famous detective, those expecting to be doing any actual detective work are going to be left disappointed. This uses the Sherlock IP as a framework to justify the mechanics of the game, and it does that very well. Just don't be expecting to go into this actually deciphering anything on your journey around London to assist in the arrest or freedom of Michael Chapman. You're trying to use the available mechanics from the characters on offer in order to effectively build a case, just not as you were expecting. It's a solid offering from Devir that doesn't stay too long on the table, and with the additional bonus of optional cards that even allow you to take on Moriarty as part of the game, there's a decent amount of replay ability here too. It's strange because I think with a different theme it would still work as a game, but I don't think I would be as drawn in and I would have been more critical in how the game plays. So the Holmes brothers are still doing a decent amount of lifting here but more physical that mental. Holmes Sherlock & Mycroft is a charming two player set collection with wonderful colourful artwork that works well within the boundaries of the property. Surprising but not in a bad way.
You can find out more about the game by going to https://www.kosmosgames.co.uk/games/holmes-sherlock-mycroft/
Designer - Diego Ibanez
Artist - Pedro Soto
2 Player
Ages 10+
If you would like to support more written pieces on the blog then please consider backing us on Patreon. www.patreon.com/werenotwizards
Boardgame Review Devir Games Holmes: Sherlock & Mycroft Kosmos Games