on August 04, 2021
This is the pre-production version, so the art, rules and mechanics may be subject to change over the next couple of months. Therefore please treat this as a first thoughts piece, based on version of the game that we were provided with. We have not been paid for the preview. We also do not provide a full play by play explanation of the game, so not all mechanics may be mentioned in the preview.

So what have I done? I really don't know. I have a rule about reviews that I keep to myself which is very simple. Any designer that contacts me and says 'Well, it's like chess but..' I normally respond with a quiet thank you and then a polite decline. I want people to sell me the game because of what it is, not because they claim to have improved a game that is so in it's own category some people wouldn't even necessarily put it down as a board game. No, making the horsey jump an extra space isn't going to cut it, and no I like the prawns the way they are I thank you very much.
So Frances Games contact me and I'm quite literally caught in some kind of off day where I haven't been concentrating properly, and there's a friendly polite conversation. It's clear that at the end of that exchange I've totally proved to them how much a Kickstarter expert I am by imparting on them so much amazing wisdom, and they've proved that they should probably go into scamming people out of their details because somehow I now have a preview copy heading my way. I pour myself another coffee and go sit in front of the letterbox to wait until it arrives. Four days later, and with terminal cramp setting in, a box arrives with my name on it. It's bigger than I thought and crawling through to the dining room I try to get it ready to play. 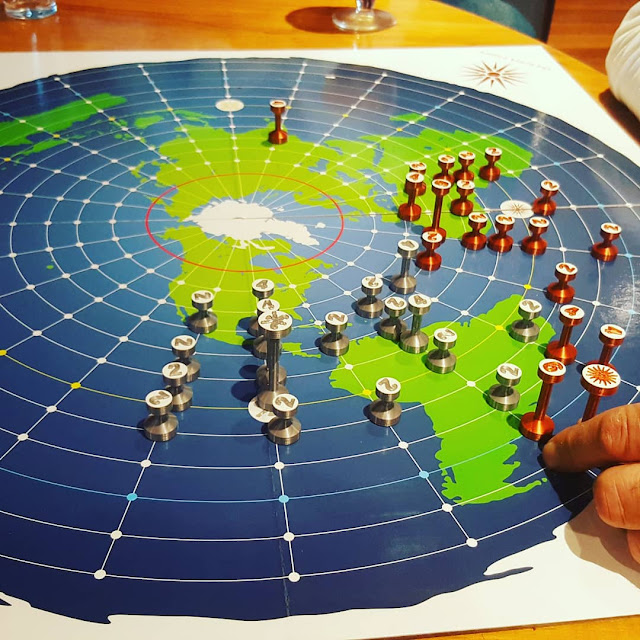 I'm cynical. The rule book is a pamphlet and the graphical illustrations look like they've been made to be read by the very small pieces you play with. This could end up being a game that I end up being very sarcastic about, which is a strange thing to do with a Kickstarter piece, as you know it will never end up being shared in an update or end up on the campaign page. Such is the life of a self important pompous ass. I dip my quill in the vinegar several times and take notes.
In these situations it's worthwhile bringing in my middle son, avid chess player and person who has teenage cynicism burned into the very essence of his soul. I want someone to sit and scoff with me. We can cackle over this together. It sounds like a brilliant plan. We set up the board with the multiple concentric circles and numbered pieces across from each other, scowling. 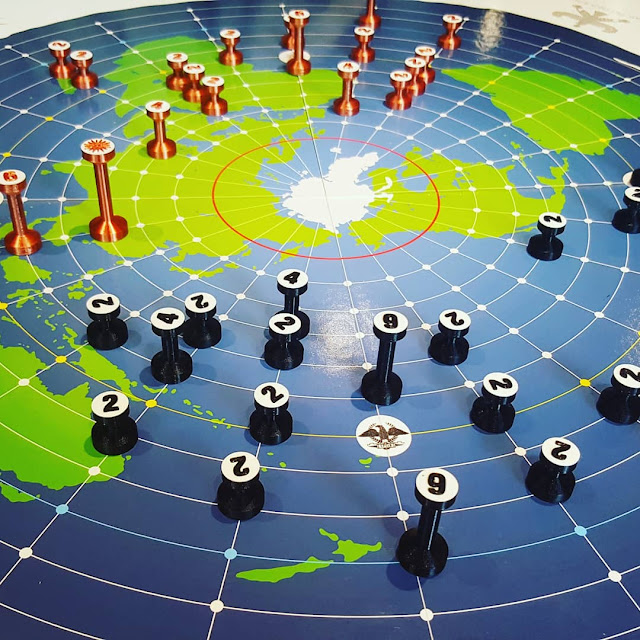 The first mistake is thinking this is just another chess wannabe, Empire Plateau holds its own as its own type of strategy game with its owned defined offering for the genre. The numbered pieces represent the armies you can play with, with the larger one type emblem piece giving you the chance to move a ridiculous number of twelve spaces but limiting what you can do with your other armies. Smaller armies only move the numbers on their tops, and they take out the enemies by landing on their spaces. The 2s need to move in an L shape to do this, which mixes up the strategies you have to employ, while the 4s have the ability to leap over other pieces. The 6s are you regular muscle, moving enough to jump in and create blocking opportunities against your opponents trying to take your base out.
I'm impressed with the level of accessibility. Empire Plateau wants you playing as quickly as possible without needing to spend 30 minutes wading through a rule book with variations and confusion.
You only realise how easy it is to pick up and play once you've reset the game for the fourth time and you're still having fun. Well, my son was having fun after declaring victory again and again.  I once again was wondering how I could be vitriolic but at the same time, look calm and composed. 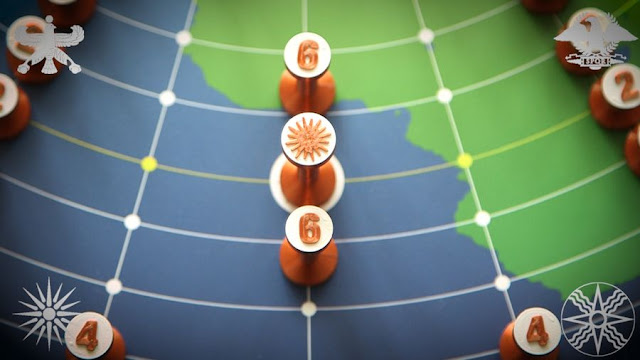 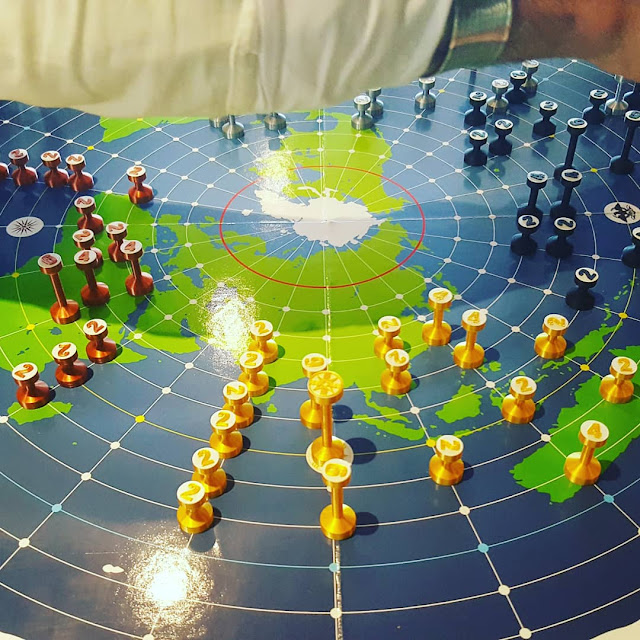 The thing with Empire Plateau is the nature of the play area itself, the concentric circles on the board mean that spaces can have different physical distances to your eye but actually only be the same number of moves apart. I love how it bends the very nature of spacial awareness itself. Quite often you'll miss out on the potential attack sitting in the outer circles, which really sets it apart from normal standard games where you're battling across a normal dull grid and it's easy to plan and spot moves. There's nothing more rewarding than charging around from the outer and inner circles at once in a pincer movement and it means that while the 2s aren't two great the further away from the centre they are, they can really zip around the inner circles and causes some serious damage as you get into the game. Planning really comes into it's own and Plateau starts to slip into the category of there being a much deeper game once everyone knows how the game works, even with the limited move set you get out of the box.
It plays really quickly, which in itself pushes it more into the accessible camp, especially if you are looking to indulge players who like a bit of chess but don't necessarily like the huge learning curve that a lot of modern board games throw at you. So when you sit down, you aren't necessarily committing yourself to a two hour slog, unless you fancy playing two or three rounds back to back. With the quick set up and tear down, there's very little to prevent that from happening.
Plateau looks basic, there's no components apart from the pieces you play with, no special power cards to throw into the mix. The pieces in their various metal formats are serviceable and non threatening. The board enjoys a basic layout that doesn't confuse. There's no theatre here, except for that which will play out between the players battling across the table.
Empire Plateau is a pleasant surprise that offers a unique take on strategy games, mixing things up with its game board and never overstays its welcome. Now if you'll excuse me, I'm off to go be grumpy somewhere else.
You can check out the Kickstarter Campaign for Empire Plateau by visiting https://www.kickstarter.com/projects/plateauboardgame/empire-plateau-the-ultimate-strategy-board-game
If you would like to support more written pieces on the blog then please consider backing us on Patreon. www.patreon.com/werenotwizards