Being a son of Perth and a tabletop gaming fan, its with a sense of duty that I went to the debut of Tabletop Scotland way back in 2018. It was a genuine thrill seeing an event of this stature begin life in my hometown. Such was the success of the inaugural event, that Convention Overlord Dave Wright and his team (Simon, John and Duncan) returned to the Dewars Centre in Perth for the second iteration of Tabletop Scotland.

This year the event was held in two halls, as opposed to the one last year and the expansion really made a difference. A lot of people I spoke to over the two days highlighted the space and lack of being cramped as a big plus point. Having been at the UK Games Expo earlier this year, Tabletop Scotland really felt more spacious. Sure, UKGE is massive so its always going to feel smaller by comparison but having the ability to walk around without people being in your bloodstream and being able to find a seat at the open gaming area whenever you needed it was a big bonus. UKGE felt really oppressive and cramped to me when I was there, while I never felt that at Tabletop Scotland, even when I was in well populated areas. 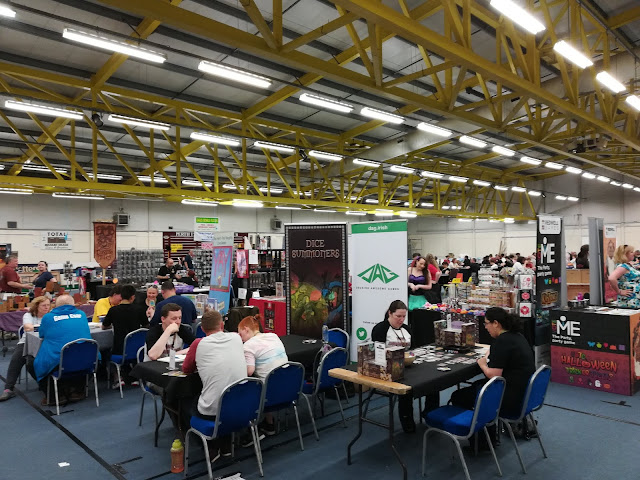 The two halls were always pretty well balanced in terms of people using them. A good split of exhibitors/vendors across the two halls definitely helped in avoiding an imbalance in the number of attendees using the halls at any given time. There were also rooms upstairs in the venue being used for various RPG events, a Starship Bridge Simulator and seminars. There was also a cafe with ample seating and a bar, with a further area in one of the halls selling fast food and hot and cold drinks. There were also plenty of volunteers on hand should any need help, as well as lots of Dewars Centre staff.

Saturday was a day of hanging out, playing some games and catching up with people. Oh, and the all-important dropping off of games to the Bring & Buy, which was very well run by the team who included the Man With The Loud Voice from the UKGE Bring & Buy. He ensured it all went very smoothly. Happily I sold all my games which paid for the all the Magic: The Gathering cards I bought (don't tell Richard). While we're at it I forgot to attend Head Non-Wizard Richard's 'Crowdfunding 101' panel. I blame Ross and Stevie from Tip the Table Games though, as I got chatting to them and lost all track of the time. (never mind I was already 30 minutes late when I met them, but I figured I'd throw them under the bus as that's the premise behind their game 1 Survives which we'll feature in the coming days). 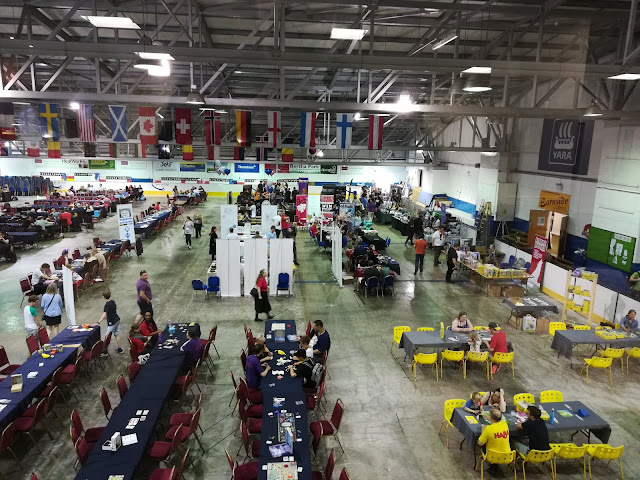 Later on Saturday I did get a demo of the game 1 Survives from the aforementioned Ross and Stevie and I have to say it was a lot of fun. Especially when my friend David's 11 year old son went on a rampage and racked up a bigger body count than the games murderous protagonist. I believe the quote of the weekend from him was "How many people have I killed today, Dad?". There was much laughter, which died down once we thought about it a bit. But in all seriousness, it was a lot of fun in the group of 5 and a full Sideways Glance of the prototype will follow later this week. 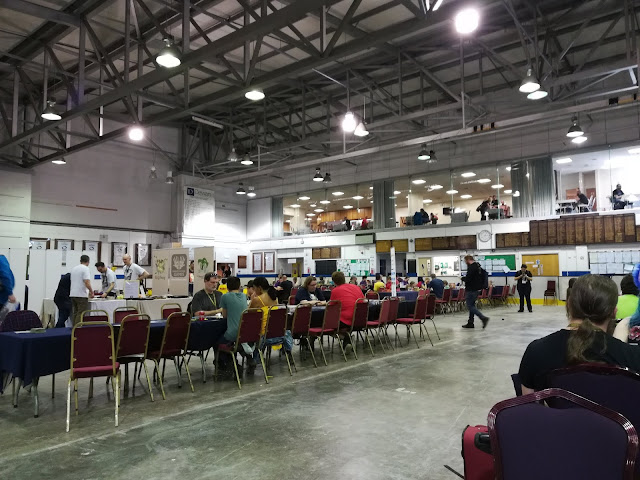 It was also good seeing some of the main Scottish gaming stores at the convention. Common Ground Games (my own FLGS), Big Dog Books from Perth, Settlers from Hamilton and Murphy's Vault from Edinburgh are all contributors to their local gaming scenes so it was good seeing them with customers every time I passed. Common Ground Games were also running demos of Carnivale and Tanks. There was plenty more on offer with artists, more craft leaning vendors selling jewellery, custom dice, mats, scenery for miniature gaming or if you were feeling flush gaming tables. There was something for everyone in the hobby. I can't leave the vendor coverage without mentioning Owen Duffy, who was there to sell his rather brilliant 'The Board Game Book' which ran successfully on Kickstarter in 2018. Om Sunday afternoon when I stopped by the stand he only had two copies left so it proved a popular item over the weekend. Lookout for volume 2 hitting Kickstarter on 2nd September. 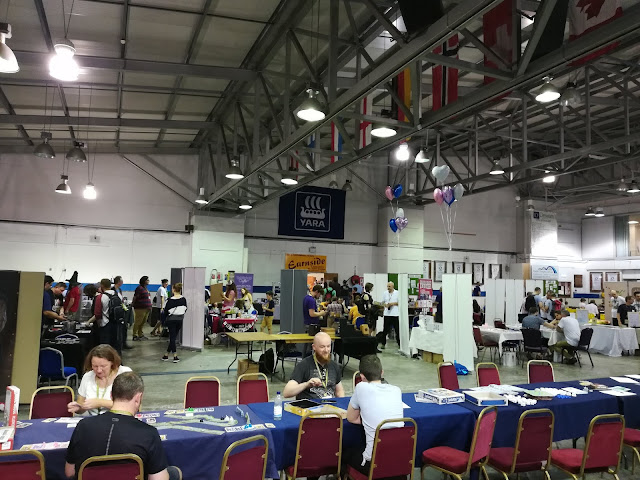 There were also a number of publishers present to demo games, including Bad Cat Games, demoing their excellent game Gladiatores which we covered ahead of the successful Kickstarter campaign, Stuff by Bez was back with their wonderful selection of games, One Free Elephant with MicroBrew and Carcosa, Inspiring Games demoing Legends Untold (more below), Hush Hush Projects with their big hit Fog of Love, Dream Big Games with their miniature post-apocalyptic vehicular combat game Wreck & Ruin and many more. There were also demo teams on hand from Asmodee and HABA and a Gateway Zone with a selection of games to try out. Also returning from last year were All Around the Board, who were jointly running the Games Library with the Dice Roll Cafe from Glasgow.

Another game I demoed, as mentioned above, was Legends Untold, by Inspiring Games. Essential a Role Playing Game in a box essentially. My group of four were playing through a scenario to showcase some new material that's in the pipeline from the designer. It was quite the adventure, featuring a drunken goblin somehow jumping a chasm with another adventurer on his back (it was best not to ask), a character with an unhealthy penchant for picking random mushrooms and a Lyre playing performer who liked throwing caustic Irn Bru at the denizens of the sewers. All-in-all it was a lot of fun. Especially fighting a giant black pudding at the end of the campaign. 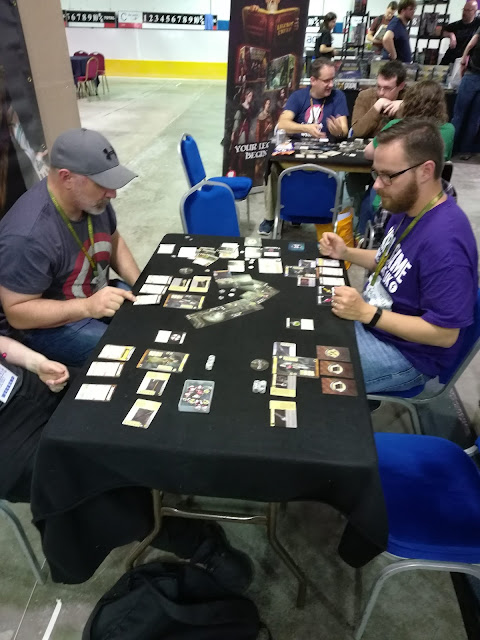 It's really impossible to sum up everything on offer at Tabletop Scotland. It really did cater to all tastes and experience levels in tabletop gaming. There was a really good atmosphere in the venue all weekend and lots and lots to do. Most of the vendors seemed to be pretty busy most of the weekend so I hope it was a successful one for them all. Hats off to the organisers for setting it all up and also to the attendees for making a great weekend and a Perth native proud this was happening in his old stomping ground. Fingers crossed the event will be back in 2020. Oh, and lastly congratulations to my gaming buddies Matt and Erin who won the Pandemic Survival event and with it an entry to the UK Nationals next year at UK Games Expo.

Thanks to Dave and the team for providing We're Not Wizards with press passes for the event.