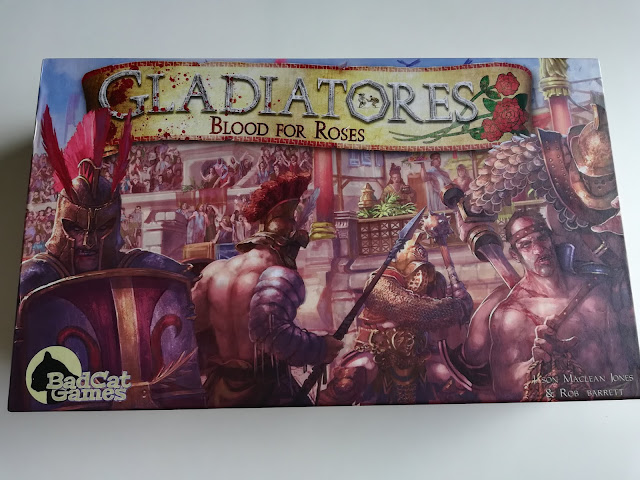 The crowd are baying for blood. They want a show and if you want to fight in front of Emperor Caesar in Rome you better give them one and be the last gladiator standing in the arena. Sweat runs into your eyes, your swords feel heavy in your hands and the taste of blood is in your mouth. Lucius Felix is advancing towards you, sword and shield in hand.

Gladiatores: Blood For Roses is a tactical combat game for 2-5 players, pitting combatants against each other in the arena. The goal is to win favour during the event and be the last gladiator standing to win the most acclaim.

Straight away, the game does a great job of emulating the combat of multiple fighters in the arena. Your hand of cards represents your stamina. The hand is made up of either attack, defense or effect cards and on each players turn they have the chance of attacking another gladiator by selecting a target and playing an attack card. 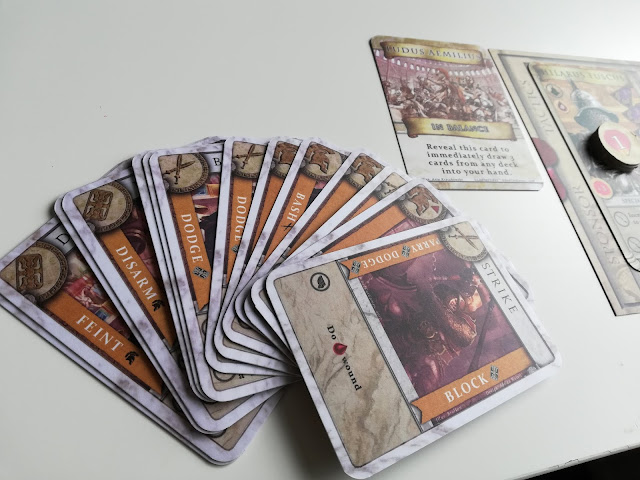 Each attack card will list the card requirements from the defending gladiator which would enable them to defend the attack. These cards have the potential to be followed up by an effect card which would swing the fight in favour of the defender, turning them into the attacking player. This gives combat a real ebb and flow. The ultimate aim in the combat is to play the final card, which triggers the cards effect. This can be inflict two wounds, inflict one wound etc. Inflicting wounds also gains the victor if the battle favour from the audience in the form of rose petals taken from the event pool. 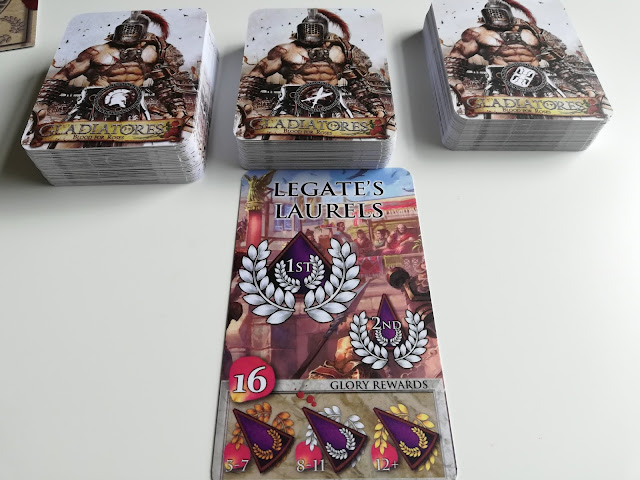 When playing at higher player counts there may be a concern that the down time for non-combatants may take these players out of the experience but I've found this is not the case. The battles can rage across the arena with players being targeted by consecutive players if they appear weak or tired. As I mentioned earlier the hand of cards is your stamina. Each gladiator starts with 9 cards for the gladiator they are playing and another 5 cards taken in any combination from the three decks.

It's vital to manage your hand and not over extend yourself as you'll be out of the fight quickly if you do. Luckily card effects, gladiator abilities and an action can allow you to draw more cards, but as your hand gets lower the players not directly involved in the fight will be watching very closely at what attacks you can't defend, how many cards you have and how much health you have left. It further adds to the feeling you've backed away from the immediate fighting to catch your breath and assess the situation before selecting your next target.

Another real plus for me is the gladiators themselves. While the attack, defense and events cards are standard size, the gladiator cards are tarot sized and have fantastic illustrations depicting the fighter in question. The big draw (if the art isn't enough) is that these guys actually lived and fought as gladiators. There is historical evidence of this and that for me is a huge plus. I've always had an interest in the Roman empire so this attention to detail is a real bonus. The gladiator schools (or Ludus) each player can choose to fight for at the start of the game are also based on real schools. 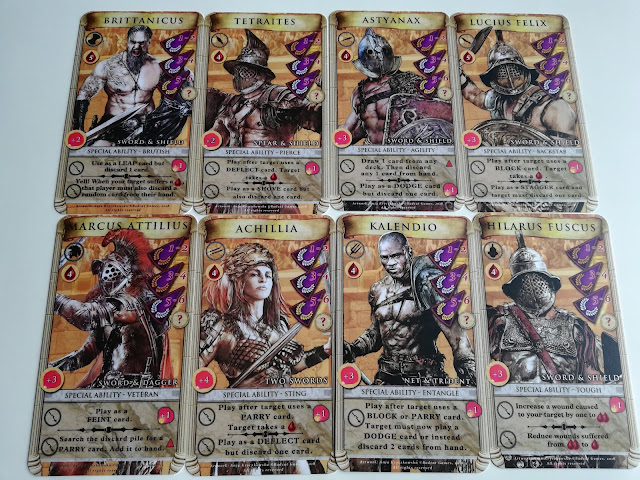 The game adds a lot more than just the combat however. There's also an auction element, with players able to bid on gladiators to fight for their Ludus. Tactics cards and Sponsor cards can also be added to give some more options to the game. There are several events players can fight in with varying rewards. The winners of each event gain varying amounts of glory which are then placed upon the player board as wreath tokens with bonuses being unlocked as the game progresses across multiple events. 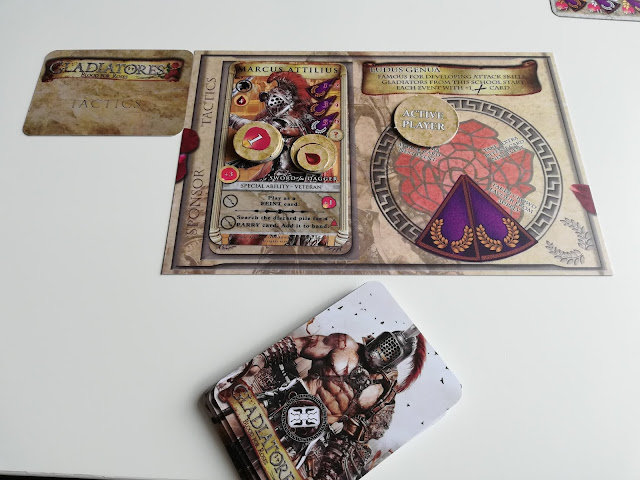 I was really impressed with the game. The combat mechanics were excellent and felt really tight. There's a real sense of the back and forth combat in the arena. You have to be really careful during the fights to not over-extend and leave yourself open to taking wounds and being eliminated. At higher player counts this gets more important and it was great fun playing at 4 players (I didn't get the chance to play at 5).

The finer details are really nice too. The player board, the gladiator schools, sponsors, tactics and the auction add more flavour and complexity. The combat never feels like a rerun thanks to the different fighting styles and potential card combinations. Aesthetically speaking it's lovely too. The art from Brolken and Ania Kryczkowska is excellent, particularly on the gladiator cards.

At the time of writing the Kickstarter campaign has 28 days to go and is already passed the funding goal. You can check it out here.

We were provided a preview copy of the game from Bad Cat Games. You can visit their website by following this link.