Demeter Board Game Review - Sorry We Are French - Hachette Games

This review is based on the final retail version of the game provided to us by games distributor Hachette Games. We were not paid for this review. We give a general overview of the gameplay and so not all of the mechanical aspects of the game may be mentioned. 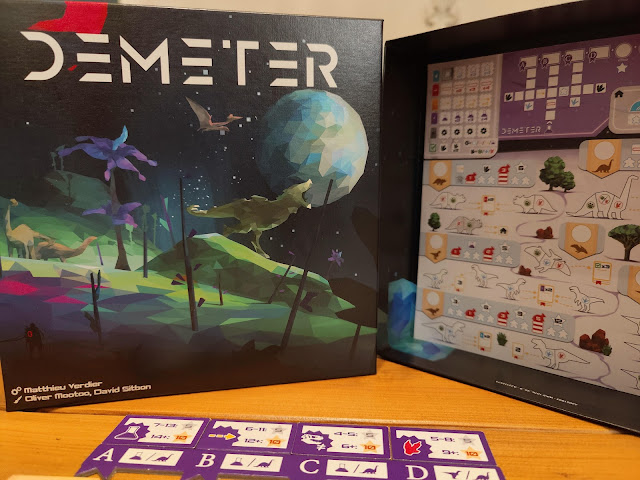 Stop being clever. Taking that into account, sometimes all I want is a game that is solid and bloody well good at what it does. Others throw at you what looks like an inaccessible pile of nonsense that baffles, while you try to translate what is on the table from the rulebook that is so much many confusion. I'm tired of innovation for innovation's sake. It happens you see. When we get a shiny new exciting genre, or an old genre that gains a bit of popularity and its taken and copied and then others take what they think are the fundamentals of what makes something fun. They twist it a bit too far and they mess it up and you're left with a tuna and banana pizza with a chocolate orange stuffed crust. If any one of you reading this thinks that sounds like a good idea, then I'm afraid I have to come after you. It's the rules you see. 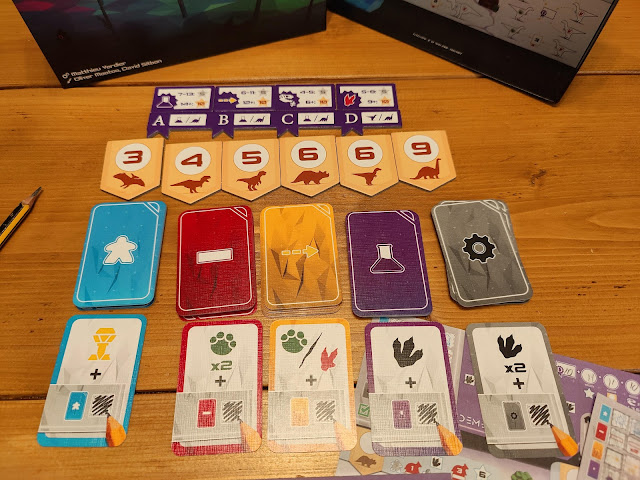 'There's no need to apologise' is the first thing I mutter when I look over the rulebook for Demeter from Sorry We Are French, which makes me chuckle and also wonder what part they are apologising for. It's clever because I now know I'm going to remember this company even if I don't like the game. So I file it in my mind under quirky and at the same time try to remember if I know what the French for quirky is. (It's excentrique btw. You don't need to disappear and google it. Stay here.) 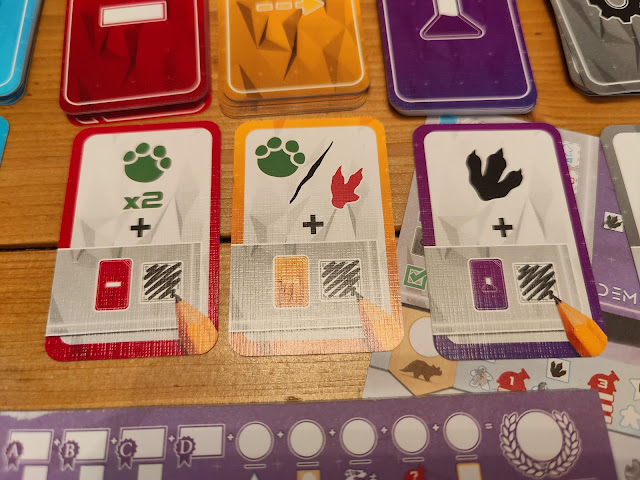 Demeter is a game about discovering dinosaurs on a distant planet that has a connection to a previous game of theirs, Ganymede, which I have never played but am potentially interested in giving it a look if it is anything like Demeter. It's a flip and write where you draw a common hand of cards which everyone will work from and these in turn will allow you to fill out certain parts of your own planetary sheet. Cards come in five different colours, which decide a bonus and also your main action. You have the choice of completing colouring part of a dinosaur, or increasing the number of scientists you have, or observation platforms. You might build a building to increase the number of rewards you gather which becomes more important as the rounds progress.

In Demeter your trying to win the most Mission Points and while the route to winning can vary, ultimately its about multiplying what you get on you base turn. Each of the dinosaur areas have their own track and way of scoring points for you, but you'll need to open up parts of the scoring track by making sure you have already completed earlier parts of the track. Now, there now restriction on the card choice, and multiple players can pick the same card for that round, but what becomes interesting is where they mark on their sheet for that particular resource. 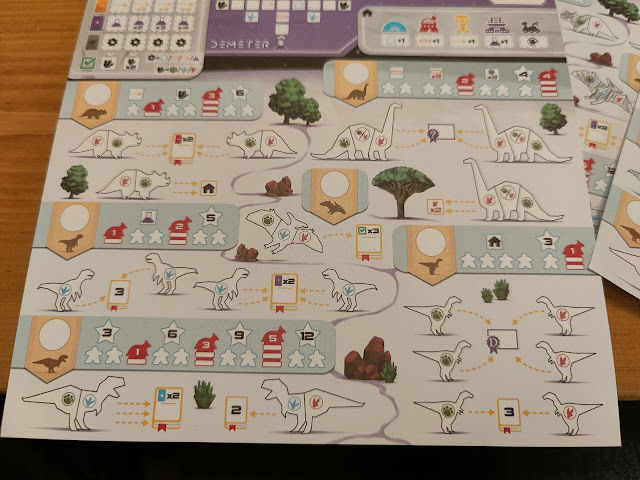 With the choice of possibilities on offer when you pick a resource for where you play it, it's actually perfectly feasible for two players to select the same cards during a game and end up with different looking scoring sheets. It helps to play off the fact that like a lot of roll and writes, there can be a lack of direct player interaction, but it changes Demeter into some kind of efficiency puzzle where the fastest player will often win through. You begin to wonder whether it's worth being the first to discover dinosaurs to score the bonus quicker, or whether to concentrate on producing buildings to give you an extra resource every time. You might decide you want to maximise research or simply make sure you're picking a variation of coloured cards because in the endgame, all of these decisions will matter when it comes to tallying up the end score. 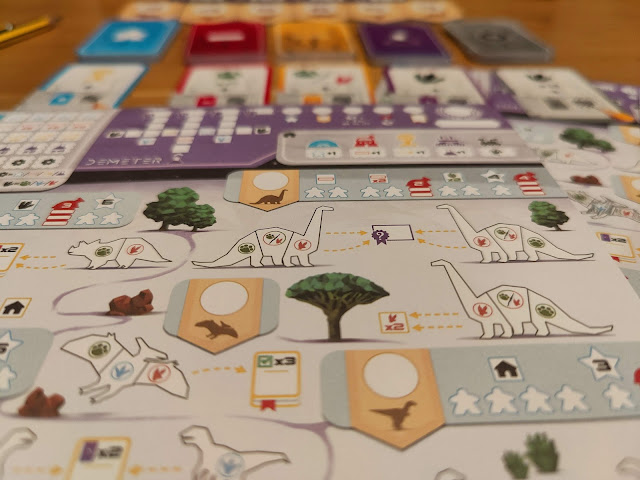 Even for of its potential brain bending, it's fast and it picks up the pace as the rounds progress as the players rush to complete their committed strategy. There's no hiding either, your board is there for everyone else to see, and that can lead to sudden changes in direction just to try to make sure you're grabbing those all important extra points to scrap a victory. The theme is neither here nor there. I really like the artwork, I actually think its a crying shame we don't see more of it on the card art as the geometry based illustrations are pretty cool in my book. Shaded in lined based dinosaurs is always going to appeal to my inner child, and so yeah. I like that. 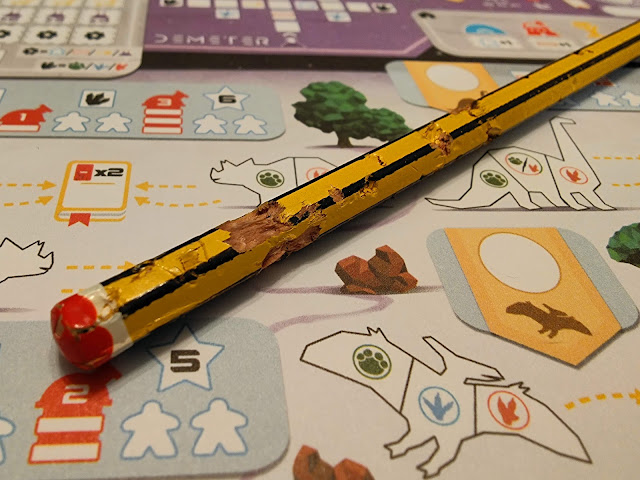 I enjoyed Demeter as it headed towards the final crescendo and players were picking one card but marking down resources across their entire pad. It's fairly easy to learn, and takes literally no time in terms of set up. There's not a real player count to worry about, you can play it solo as a score beater and it can easily support a full table of as many players as you have sheets to write on. It's going to be one of those games that you'll bring to the table as a warm up before you head into a crunchy main event. Sorry We Are French have very little to apologise for. Formidable.

Hachette Games can be found on https://www.hachetteboardgames.co.uk/