on February 11, 2022
This review is based on the final retail version of the game provided to us by the designer and publisher. We were not paid for this review. We give a general overview of the gameplay and so not all of the mechanical aspects of the game may be mentioned. 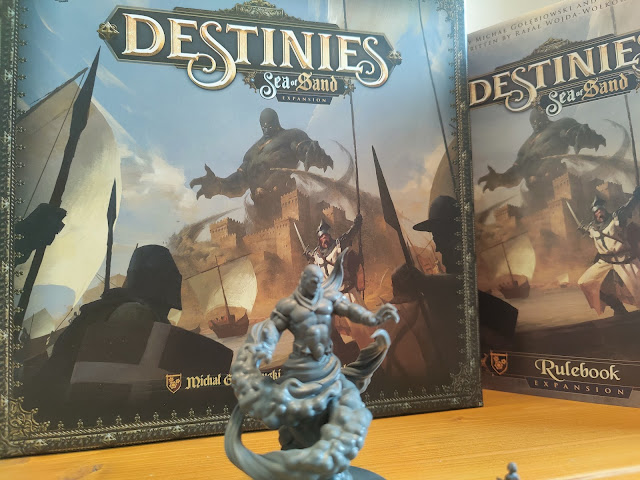 So while everyone else is comfy staying in the the solely cardboard world with the tables of chewed up and printed trees, oil derivatives figurines, and rulebooks at the ready to be checked off as required, Lucky Duck Games continues to push on with its hybrid model. Just like in the Chronicles of Crime series of games, the use of an electronic device is integral in order to make any progress, whether it be a tablet, smartphone or even PC with a handy web cam, you'll need something to scan QR codes on various items in the game as well as check your own Destiny.
The easiest way to describe Destinies is like a choose your own adventure multiplayer with bells and whistles, with the slight twist of giving everyone their own special requirements in order to meet their Destinies. At the start of the game you'll be given the choice of characters you want to play and you'll collect your own character sheet, gold, extra equipment and dice as required. Each of your character cards has its own agenda which you keep secret from the other players. Yes, you'll want to work towards a potential common goal but you'll also want to be mindful of achieving one of two secret conditions in order to win the game outright. The two become interlinked over the course of the game and so by playing through that particular scenario, you'll be edging towards the requirements to trigger your own Destiny. 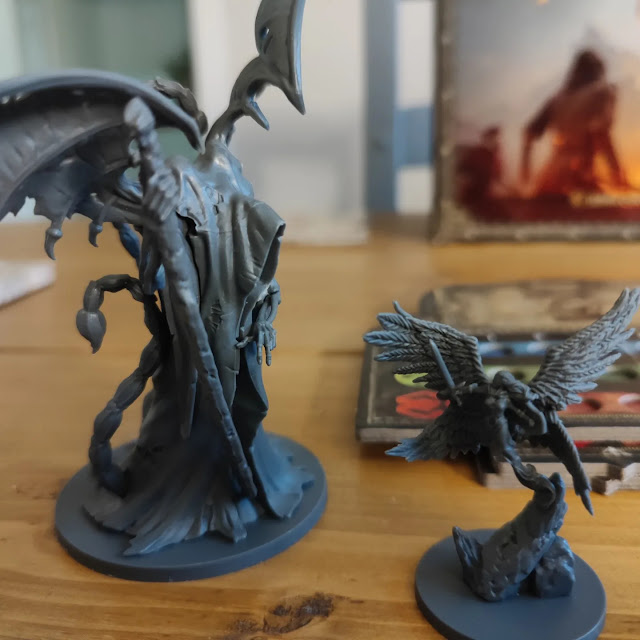 As you explore the areas of the scenario, you'll be revealing tiles covered in a 'fog of war' when they are played that you can explore. Exploration leads to the reveal of points of interest and characters that you can interact with during the journey. You'll have the opportunity to take part in skill trials, purchase equipment and even explore certain areas of the map further and all managed through a mixture of the app and really really really small miniatures. 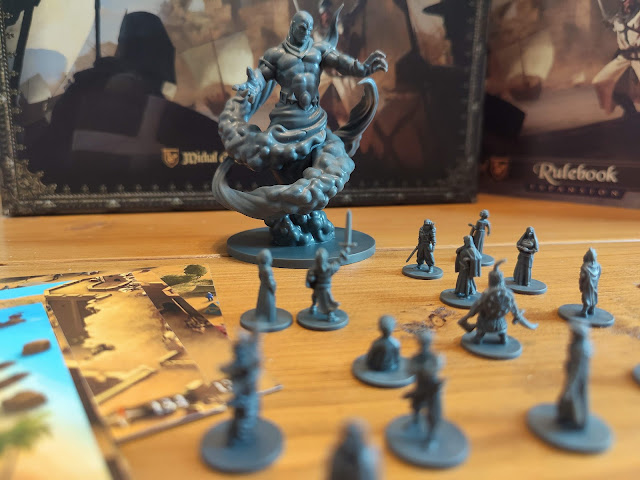 There's something strange about getting used to playing Destinies, and mainly because the app is an actual requirement for progress. It's not a simply gimmick that sits in the background and occasionally comes out to play. If you want to ask NPCs about your own destiny you need to scan in your own card to hear what they have to say. When you use an item, then you'll do the same thing. When you take one of the skill tests, which crop up on a regular basis, then you'll need to tell the app how many dice successes you had so it can tell you whether or not you were successful for that test. When you want to interact with one of the items on the map, you'll be check it against the app. It's so easy to use that sometimes you'll need to remind yourself of the additional actions you can take outside of the app itself. 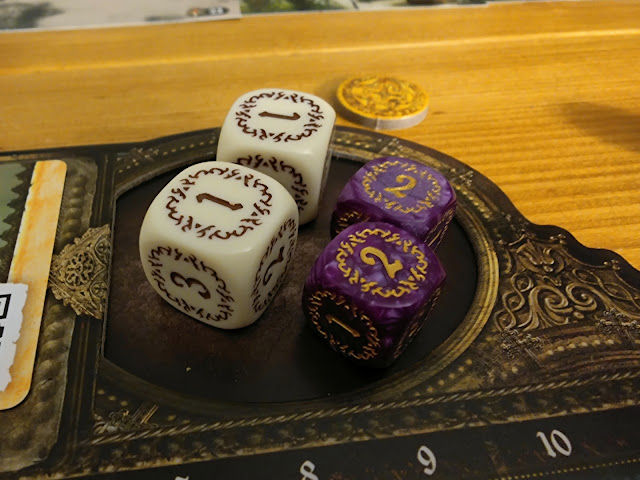 Interestingly, and I don't know if this is due to the difficulty in implementation, the app still requires you too manage your own inventory, gold and items. It's actually possible to buy anything you want in the game just by saying you have enough gold in your possession, with the same being said for skill tests if you are wanting to play on easy mode. It's not a criticism as such, just something to note that if you are planning on playing the game with younger players, or even on a casual basis and want to breeze through it. Destinies doesn't keep you in shackles to allow you to play the game how you want to play it. The bottom line is the app is meant to be passed around and not something that forces everyone to spend hours poring over a screen. The balance between app time and physical game time seems to be pretty spot on.

I played a couple of scenarios for both the base game and the Sea of Sand expansion and there's a lot of writing that has gone in to the creation of all the playable scenarios you can play. The inclusion of the app brings in the opportunity to add in additional content at any point, and the use of QR technology means that while the same items might have the same basic effects, there's nothing to stop Lucky Duck in future changing what things do based on the stories they are involved in. In fact, as long as there is support, there's nothing to stop there being lots of additional stories in the future. Sea of Sand brings in additional parts of the adventure which I'm not going to spoil for you, but it shows the potential that can be added to the game in future expansions depending on how far Lucky Duck decide to go with it. Just don't get lost and remember to turn left and you'll be fine.

From the physical standpoint, the artwork is decent looking and the characters are pretty small. So small they can be difficult to match up sometimes with who you are meant to place on the board. It's a time and familiarity thing. One of the things you won't be mistaken is the frankly huuuuuuuge behemoth you'll have to take on in the final battle. The sculpts are highly impressive and will no doubt look amazing when painted. It's a well organised package here and is fairly simple to set up and take down providing you're willing to be organised and put the cards back it right order and the end of every game. 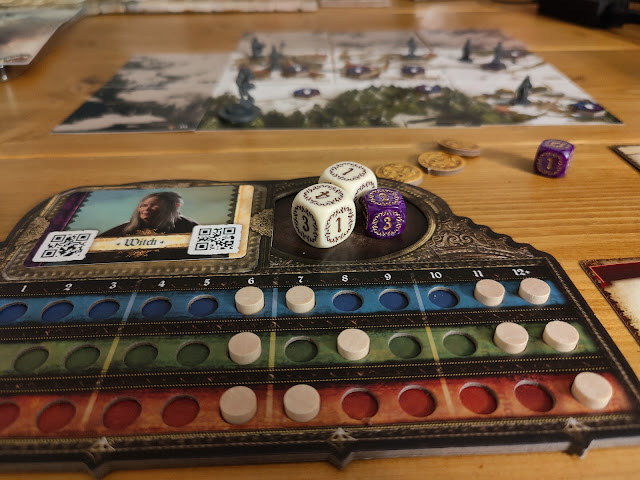 As with all of these games in this genre, the narrative driven hybrid game has the potential to offer low replay value. In Destinies once you're finished all of the scenarios then you can go back in to play the challenge mode, or play with a different character if you want. I find with most games unless I'm in a regular game group many of them will be lucky if they get to the table for our five times unless they really shake my shingles. So with that in mind I'm not sure that would pose much of a reason to not try them out.
There's not a huge about of depth here, you're essentially playing an extremely well presented choose your own adventure that doesn't really require a huge learning battle in order for you to get it going and have everyone comfortable with how to play. There's fun here that with a little bit of role-playing will lead to an enjoyable evening It might not be your destiny to own a copy, but it's certainly on the cards that you should play it if you're given the chance.
You can find out more about the Destinies series of games by going to https://luckyduckgames.com/games/18-destinies
Game Design - Michal Golebiowski, Filip Milunski
Development Michal Golebiowski
Writing - Karol Gorniak, Rafal Sadowski
Programming - Marcin Musial
Illustration - Da Ya, Karolina Jedrzejak, Magdalena Lesczynska, Joanna Koziol, Piotr Arendzikowski,
Mythic Games Team,
If you like reading these words and wish to support us then please consider joining our Patreon https://www.patreon.com/werenotwizards
Destinies Lucky Duck Games Sea and Sand Expansion