Oink Games Review: Dokojong, In a Grove and Moon Adventure

on September 13, 2021
This review is based on the final retail kickstarter version of the games. We were not paid for this review. We give a general overview of the gameplay and so not all of the mechanical aspects of the games may be mentioned. 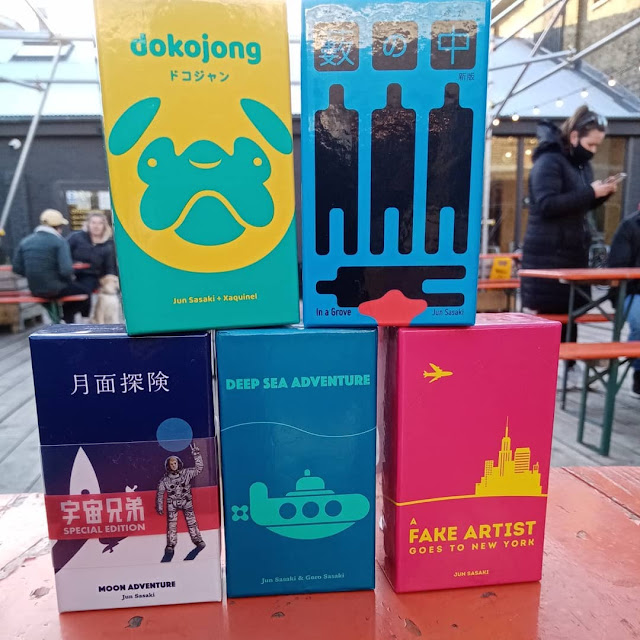 As a big fan of Deep Sea Adventure I was excited to see Oink games latest Kickstarter and happily backed and received Dokojong, In a Grove and Moon Adventure. Its fair to say that Oink Games have cornered the market in sleek, smart, tiny pocket games. 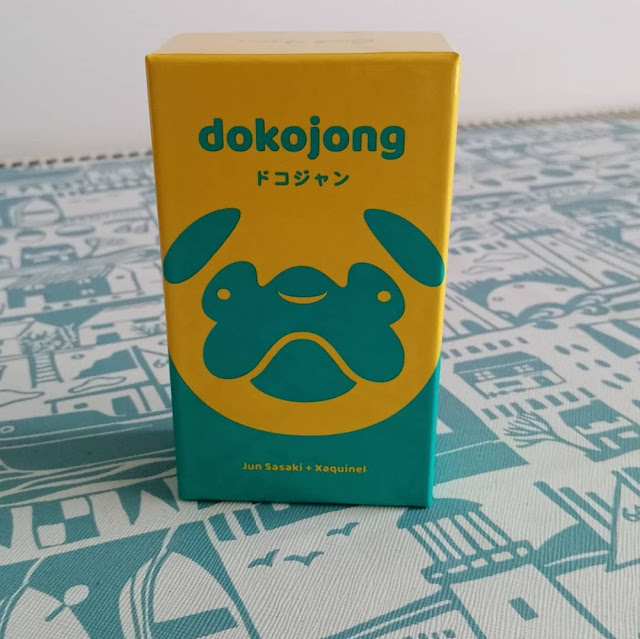 Dokojong is a 2-5 player game in which you are trying to hide your beloved dog from the other players while trying to find your opponent’s dog. At its heart this is a bluffing game. Five doors are laid out in the centre of the table which correspond to five tiles held by each player, four of which have crosses and one of which is your dog. Players take it in turns to suggest a door to open, refuse an offer and suggest different doors (having to increase the number offered by one), open a door directly that they think an opponent’s dog is hidden behind, or accept a search of the suggested doors. If your dog is found you take a penalty (three penalties loses you the game); if you successfully hide your dog by revealing three crosses you gain a point (two points wins the game). If you enjoy bluffing games then this is a neat little time filler, however it is a little complicated and sadly I found it to be style over substance. As always with Oink games the look of it is superb, the tiles contain stylised representations of different dog breeds, the doors are fun, the whole thing is wonderfully tactile, it has good accessibility with no text, colour blind friendly and chunky components. 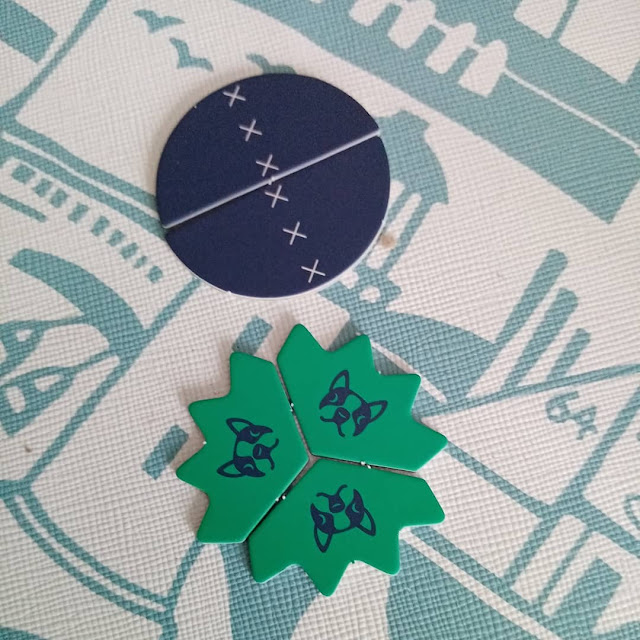 We played it 2 player a couple of times with the results coming out the same each time, we kept drawing. This is unusual as I am truly awful at bluffing, and after a while we decided it was a stalemate. The lack of a clear winner and the limited number of times you can guess doors means it won’t become one of our regular games. However, if you enjoy bluffing games its neat, very small and only £17(ish). 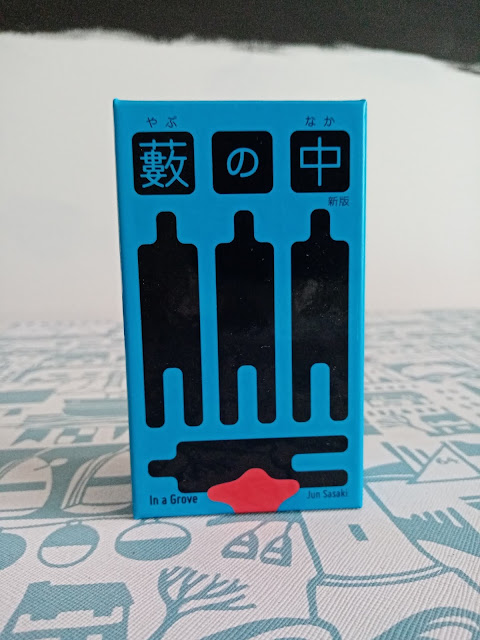 In a Grove is another 2-5 player game of social deduction and bluffing. Players take on the role of a detective, one of many, who is trying to figure out who has murdered their colleague. Three body tokens are laid in the centre of the table representing the suspects, with a fourth who is the victim. Players are then given their own body token. Each token has a number on it, the highest number of the suspects is the murderer. However, if the number five token is within the suspect pool, then the lowest number is the murderer. 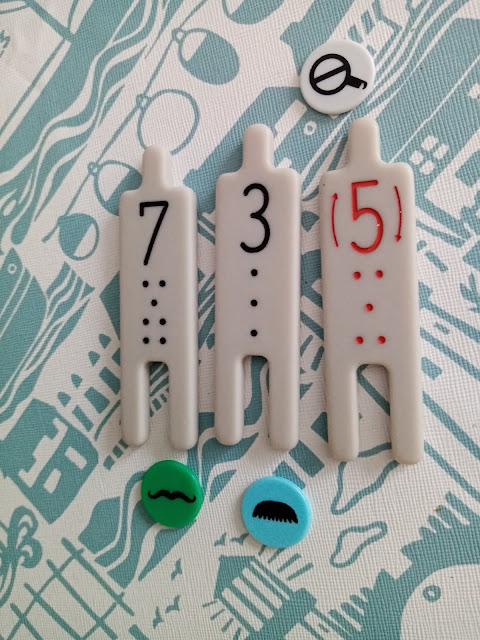 We played the 2 player rules, which are slightly different to the 3-5 player rules. In both you are allowed to look at two of the suspect tokens and try to work out which is the murderer by voting with moustachioed detective chips. If you guess incorrectly, you receive an inept chip (the detective chip flipped) and if correct you gain a point. The game ends when you either have five or more inept chips or have run out of detective chips. We enjoyed In a Grove more than Dokojong, though again found the game play a little lacking for what was promised. As with Dokojong, this updated version is tactile, well presented, user friendly, and as a lower priced, small, time filler it’s well worth the money. However, rather than being an interesting deductive experience it mostly appeared to be just luck. If you happen to see the five counter and the other player hasn’t its not exactly Holmesian deduction to work out which suspect is the criminal. You also aren’t really reading your fellow players or trying to guess or bluff what number they/you have. Werewolves Of Millers Hollow, for example, has wonderful pointing of the finger “kill them not me” social deduction; this is just calculating the probability of “I have 3, I saw a 2 and a 5, soooooo I’m deducing its 2”. 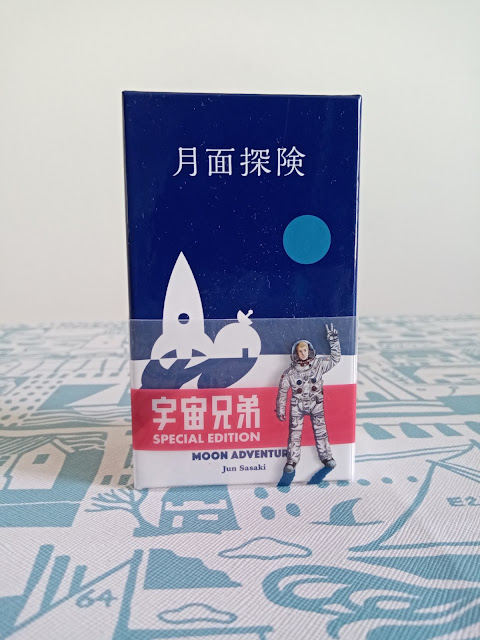 Moon Adventure is a 2-5 player co-op game in which players seek to collect supplies which have been scattered over the moon. If you’ve played Deep Sea Adventure, the mechanics are almost identical apart from the fact that it’s cooperative. Players start in a spaceship and travel down a path of tokens which are the supplies that you are trying to collect. Each player has 5 container cards which make up how much you can hold, either supply tokens or oxygen cards which allow you to move. If you run out of space on your container or run out of oxygen cards you are left stranded much like Matt Damon. However, players can share objects (either supplies or oxygen) or dump supplies to free up much needed space. This is the main departure from Deep Sea Adventure which pits players against each other in a push your luck, oxygen sharing race to see who can grab the most treasure. 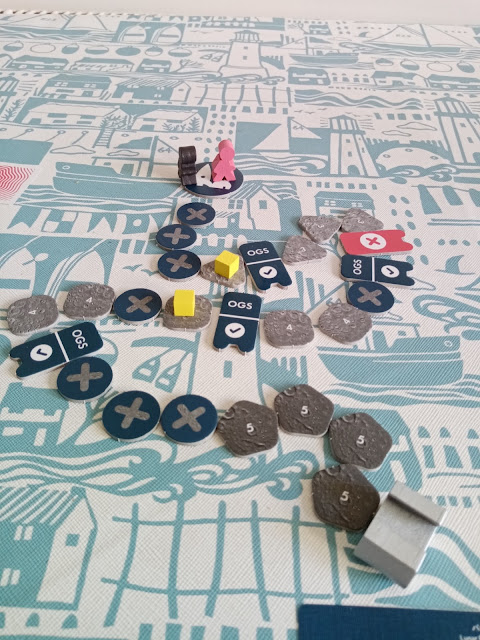 Playing 2 player, I repeatedly ran out of oxygen and thus couldn’t move so my partner kept leaving OGS (Oxygen Generation System) chips for me to reach and thus gain more oxygen, or giving me oxygen cards directly. To increase difficulty the OGS chips can be destroyed by a magnetic storm card (shuffled into the oxygen cards, adding one each time you shuffle the deck), which happened immediately the first time we placed a OGS. We ended up losing, though mainly due to bad luck. To win (in 2 player) you need to return to the ship with 5 or more undamaged supplies, you may not look at the supply tokens until you score the game. We returned to the ship with 7 tokens, only 2 of which were undamaged. As I’ve said in the other reviews, this is a beautifully presented pocket game with fantastic, tactile elements; there’s a Rover token which increases your speed of movement if you can reach it at the bottom of the path (we didn’t). 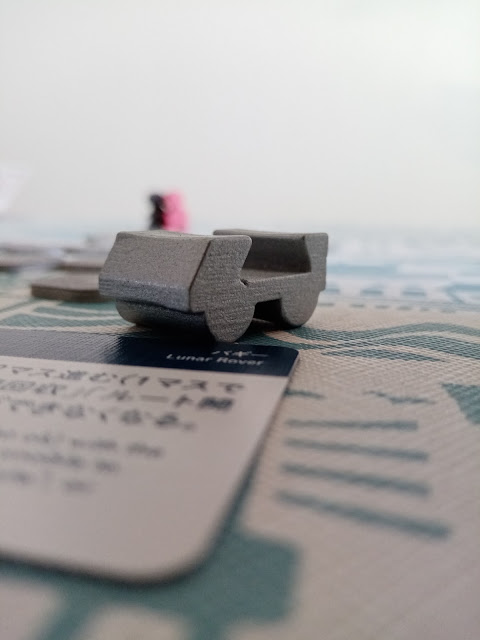 You can check out the other games Oink Games makes by going to https://oinkgames.com/en/ 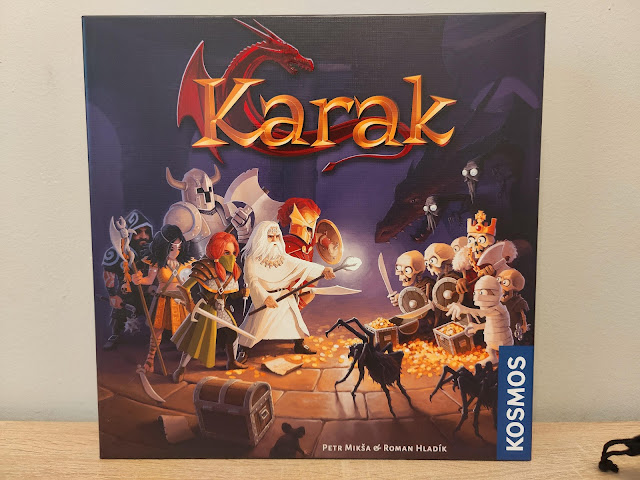 This review is based on the final retail version of the game provided to us by the designer and publisher. We were not paid for this review. We give a general overview of the gameplay and so not all of the mechanical aspects of the game may be mentioned. Oh Karak! You lay bare your gifts with your surprise card dungeon tiles and unexpected treasures in locked chests that need keys to fought for. You had players roaming as chosen heroes collecting swords and daggers and all the time wondering if the next draw from the bag is going to be the very dragon that you have to defeat in order to win the game. You bring special skills and dice rolling and indented character boards with slots for keys and life hearts with pain on the opposite side. Oh Karak! With your standees with small character art and bigger character cards with cryptic symbols that tell me sometimes everything about a character and nothing at the same time. You leave me pondering the rule book to figure out how I should 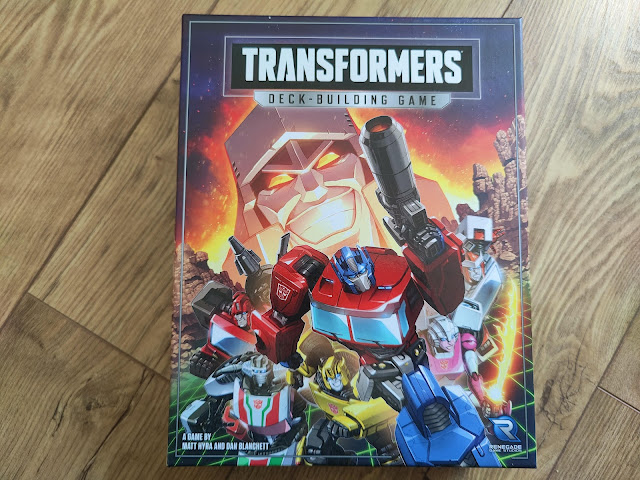 This review is based on the final retail version of the game provided to us by the designer and publisher. We were not paid for this review. We give a general overview of the gameplay and so not all of the mechanical aspects of the game may be mentioned. There are few things that you can claim to be truly at the beginning of. I was there when I first saw and heard the Robots in Disguise, and those cartoons days when the Ark landed on Earth and Optimus Prime promised to protect the humans from the Decepticons. They were expensive toys and difficult to get hold of. We were living in the dawn of 'must haves' and forced shortages to create demand after the riots of the Cabbage Patch Dolls. I remember one of the spoiled kids at school (whose parents swapped actually giving a shit for lavish toys) proudly declaring he had managed to get both Megatron and Optimus Prime as toys and we jointly envied and hated him in one sitting. He used it as a bargaining chip to decide who his friend