This is the pre-production version, so the art, rules and mechanics may be subject to change over the next couple of months. Therefore please treat this as a first thoughts piece, based on version of the game that we were provided with. We have not been paid for the preview. We also do not provide a full play by play explanation of the game, so not all mechanics may be mentioned in the preview. 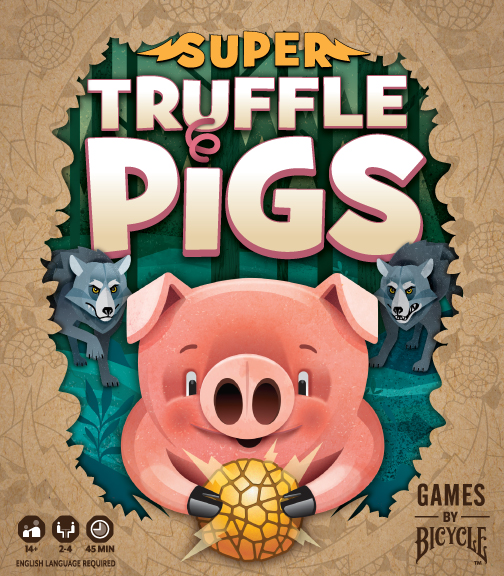 I have an expectation that as someone who can play board games with my kids. If I play things right then I'm pretty much future proofing my chance to guarantee I'm always going to have someone who will sit with me at the table and play all of the games. I'm not expecting to jump into a Turczi rules fest as soon as they get to the age of eight, but it would be nice to know that I'm not just waiting for that next game night to get something meatier to the table. The truth of the matter is that mass market board games often treat our children like they are idiots that only know how to roll dice and move pieces. The actual reality being that kids grow out of board games because they struggle to be challenging, and therefore struggle with the balance of fun confusing simplicity as a good direction to follow.

It doesn't have to be this way. The Dark Imp have proved time and time again to me that kids games can be brain burners, like Doughnut Dash with it's programming and sweet desert collection. The Kingdomino series upped the ante with the Giants expansion, and of course Queendomino, which took the base game in a much more complicate direction. Kid friendly games that push the mechanical envelope are to be applauded and welcome to the table and so when I had the chance to look at Super Truffle Pigs from Games by Bicycle and saw that it was trying on it's big kid pants, I need to dive in and see what all the snuffling was about. 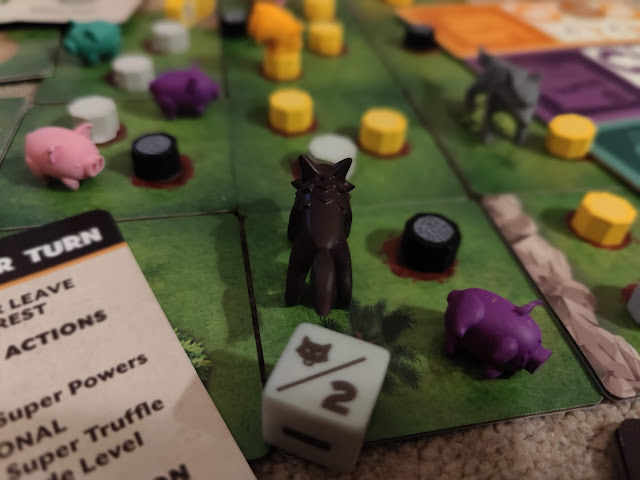 As with all of these things, the overall premise is itself simple and almost childish in nature. As a group of pigs you are trying to evade the roaming wolf packs while trying to gain the most number of truffles as you search a five by four grid made up of tiles. The tiles will contain truffles which you dig for using your actions, though you can also move and if you get in a tight spot, you can also use a super move to help you get out of a sticky situation. Once everyone has moved, the wolves move and potentially chase unlucky pigs off the board. Once only one pig is left on the board, or if only three truffles are left in play, then the game draws to close and the winner who still lives in their brick house lives happily ever after... Oh. wait. That's not right at all. Well the last part isn't. The rest is however pretty straight forward. Pedestrian. Easy enough for a child to grasp. But not simple. 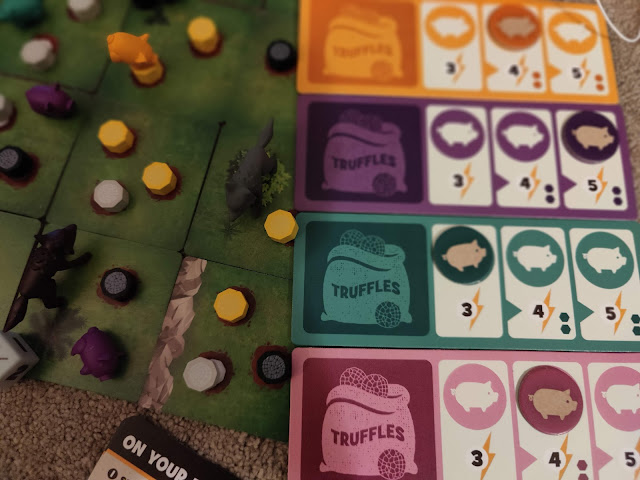 Super Truffle Pigs brings in the expected 'move around the board' but what it does to make things interesting is how it changes the game over a period of time, with the option to sacrifice already gained truffles to increase the actions you can take, and considering you start off with a paltry three actions, it's probably going to be your first thing to concentrate on if you want to collect some of the more valuable truffles. At any point you have the choice to trade in your actions to use a super move instead, and that can allow you to vault over wolves to literally fly across the board itself. With the super moves being public, sometimes you might want to consider using one when it might give you a tactical advantage over another player. 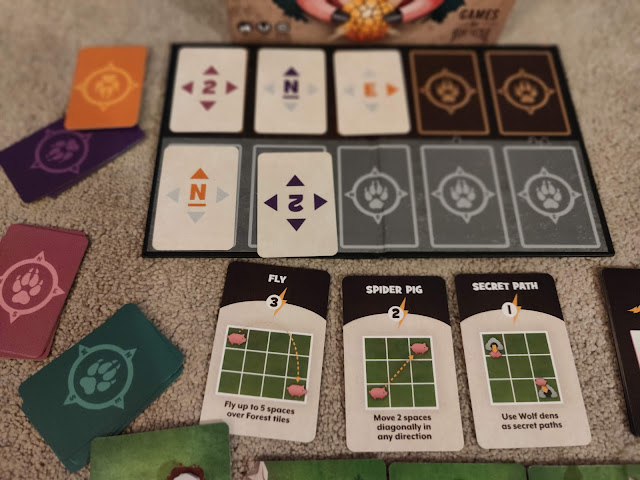 Things really get interesting with the wolves moving, as every player contributes to where the wolves will go, but the moves are kept hidden until they are revealed. When a wolf moves through a player's space with a pig, then the pig is removed. Lose both pigs and you have the choice to pay truffles to get a pig back on the board, or sit out and just contribute to the wolf's movements. Sitting out of the game becomes a strong consideration when you have decent lead and you're approaching the endgame, though it can be a gamble depending on the number truffles still left on the board. I really like the hidden movement part, as it leads to wonderful gotcha moments, and with the wolves looping around the board sometimes you can all of a sudden be pounced on from where you thought was a safe space. 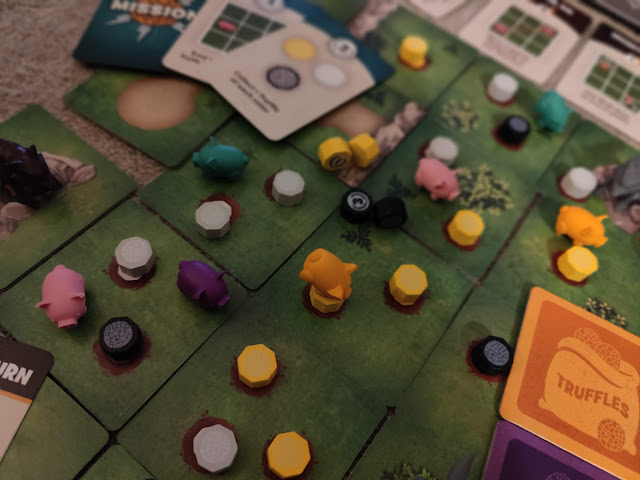 As well as concentrating on the truffle collecting, you'll also have secret mission cards which will reward you further victory points based on you reaching certain criteria. Nothing too complicated, but with three missions to work from, it can really boost your score if your truffle hunting isn't going to plan. Super Truffle Pigs doesn't hang around too long and you'll need to take some risks in order to gather as many as you can while hoping to avoid the snapping of sharp wolfy teeth. There's not a lot to learn here so it means that you'll easily be able to play alongside younger players without too much hand holding, and with the luck element of the wolf cards meaning that while your selection might be skilful, it might be someone else's cards that cause your downfall. 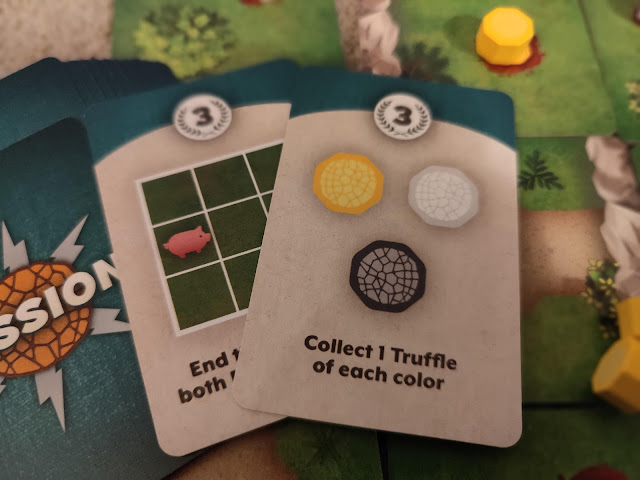 It's a very tactile game. With delightful pig pieces and solid wooden truffles, it really looks wonderful when set up and you'll find it difficult to resist picking up the pigs when you are playing with them and physically moving the pieces around the board. Every set up is different due to the different possible configurations of the game board, and tied in with the varying superpowers and mission cards and alternative winter tile set up, there's going to be plenty of bacon to chew on as bring it to the table again and again. It doesn't take ages to reset once you've played and the box isn't going to take up huge space on the shelf.

Super Truffle Pigs manages to balance that tightrope of being easy to learn and not overly difficult to play for the younger players, and introduces some interesting mechanics in order to keep things fresh and new for those used to much simpler games. It's a decent game to bring out for a quick gaming session or as a fun start to a longer gaming session. Games by Bicycle bringing home the bacon.

You can view the Kickstarter campaign by visiting