on August 05, 2021
This is the pre-production version, so the art, rules and mechanics may be subject to change over the next couple of months. Therefore please treat this as a first thoughts piece, based on version of the game that we were provided with. We have not been paid for the preview. We also do not provide a full play by play explanation of the game, so not all mechanics may be mentioned in the preview. 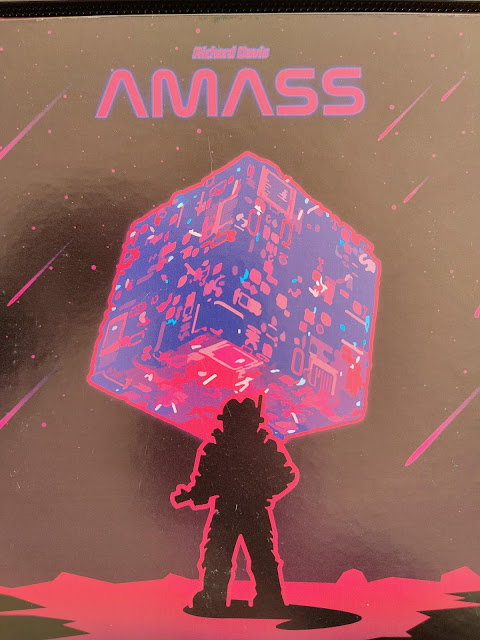 I can't think of anything worse than putting your creation out there to an audience in order to ask for money to get the project made, only to have it miss the mark. It must put you into a position where you start to wonder whether you actually don't have something of worth and fun to offer people. Though with Kickstarter it seems to be more about the sizzle and less about the sausage. I've played some mediocre extremely well funded projects in my time. So to me, first time Kickstarter success demonstrates that you're excellent at marketing and audience building, and not necessarily that your project is worth getting to the table. Amass has joined the ranks of projects that will need a second run at success and to be honest, that's more common than not at the moment. And is ultimately no reflection on the quality of the game itself. 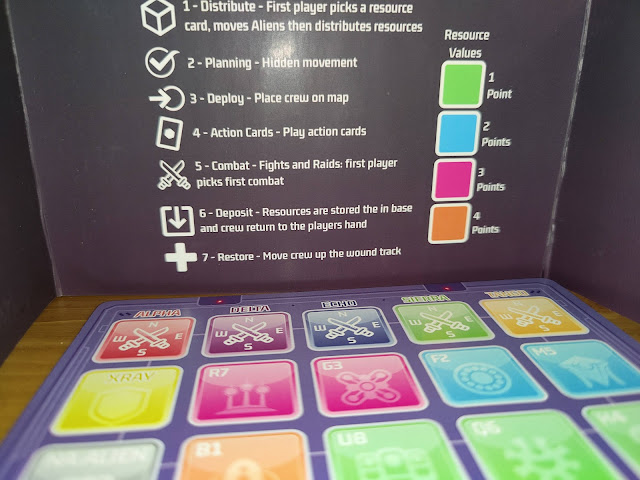 Amass is a game of hidden worker placement and short battles and trying to secure as many resources for your team as possible while avoiding the attention of the Nefar, the probable indigenous race of beings wondering why people are coming down to their planet and helping themselves to stuff they aren't entitled to and fighting among each other. They spend most of the game wondering around, knocking on space ship doors saying things like 'This isn't yours, I'm taking it back you bloody thief' or 'Don't bother trying to mine here, you'll feel the back of my hand you hear' or 'Oi, get out my base and stop stealing my action cards you little shit'. 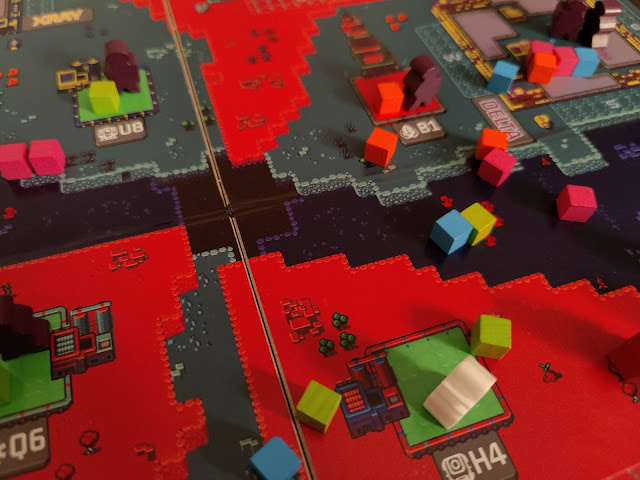 In every round the Nefarious Nefar move around the planet surface, preventing mining and stealing back the resources from the invaders, while the players plan out where they are going to place their forces in secret. This is achieved by placing your workers on a small grid in front of you, covered by a screen so no one else can see what you are up to. Once you've decided what you are going to do then everyone drops their screen and the action starts, with you placing your workers on the appropriate spaces on the board. You might decide to go mining for the resources, or go on a pillaging spree against one of your other opponents. You might even decide to go ransack the Nefar's own base for valuable action cards which can help you through the game. 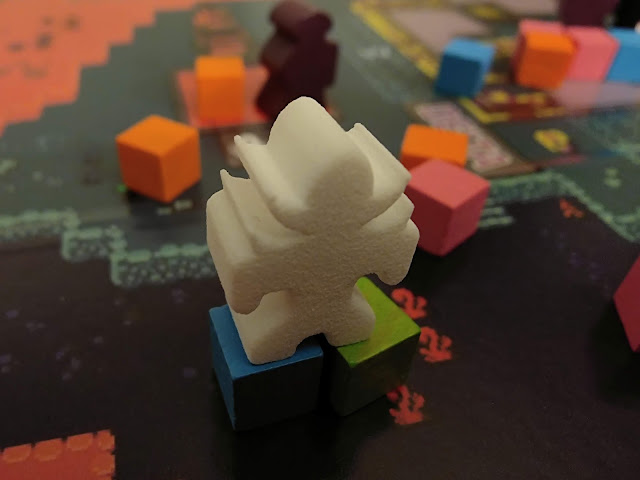 If you're lucky, then you'll pick a place no one else has decided to visit and carry out your action without impediment, but more often than not, and by design, you'll end up facing off against another player. When it comes to mining, combat will only kick in if there aren't enough resources to share between the sides, so if there are three resources but four players then there has to be a face off between two of the opposing workers. Combat is resolved through dice rolls and the result will place the defeated party on a wound track, that rewards you with action cards depending on how badly your ass was kicked. I really like wound track mechanics. I enjoyed similar things in the Funko games and Coraquest and this is no different. It can occasionally punish those that are too bold, but you never entirely feel that you're out of the game entirely as more often than not, players are losing characters across multiple locations at the same time. 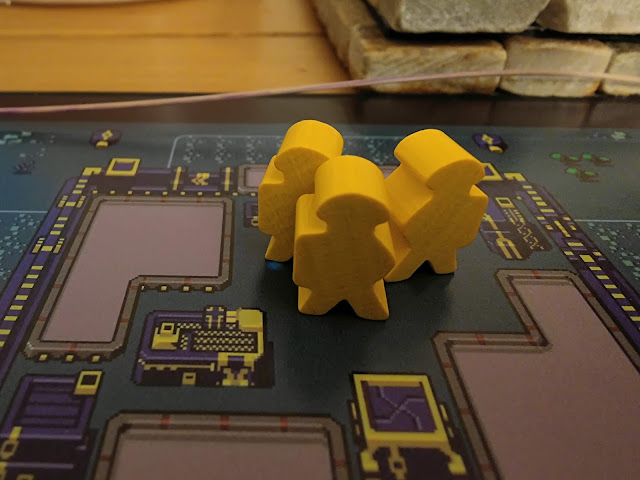 As you gain resources you'll add them to the four walls of your base, which in turn gives your opponents the chance to come in and raid you for your valuables based on the compass direction that they decide to attack on. Unlike the mines, the raiders can only attack with one worker on a specific side, and if multiple raiders from different factions appear together then they need to face off against each other before they face off against the defending base. Once the resources are all used up or once one of the bases are filled up, then the game ends and the points for the resources are totalled up and the player with the overall highest points total is the winner.
Amass looks lovely. In a board game world where the default colour scheme for sci-fi seems to revolve around the dull and mundane, Amass is almost 8 bit in terms of its design. With pastel shades that draw the eye combined with the primary colours of each of the teams, when Amass is on the table then your table is vibrant and awash with colour and spectrum. It was the colour scheme that had me interested in the game in the first place and you won't be too disappointed once you have a table full of players.
Amass is also not incredibly difficult to grasp either, as you are really only placing workers in decided positions and then resolving them based on the interaction between players. Worker placement games fall into that odd situation where the normally the only level of interaction is the denial of spaces due to placed workers. In Amass, stepping on others toes is one of the main mechanics of the game and with the nature of the secrecy behind the planning, you never really have the ability to constantly target other players directly unless you decide to hit their base. There will be noise around your table when you play and often your challengers will come from unexpected places. That being said, there is a completely serviceable AI deck for those wanting to play from solo to two players, Amass has the best fun when the full team of three to six players are there to be mining and raiding, as it is a game where you want to be looking you opponents in the eye when you lift their four pointers out of their hands. You want the satisfaction of revealing your intended actions and watching the faces go sour as they realise you've just made the move to clear them out. For that alone, Amass deserves it's place on a shelf.
Amass is heading to Kickstarter soon and you can follow the campaign by going to
https://www.kickstarter.com/projects/dfgames/amass-the-battle-for-resources-on-planet-xs
1 - 6 Players
Plays in 60 minutes
Ages 14+
Designer - Richard Davis
Producer - Robert Wingrove
Graphic Art - Richard Davis
If you would like to support more written pieces on the blog then please consider backing us on Patreon. www.patreon.com/werenotwizards
Amass Dark Frontier Games kickstarter preview