on June 11, 2021
This is the pre-production version of Dice of Dragons, so the art, rules and mechanics may be subject to change over the next couple of months. Therefore please treat this as a first thoughts piece, based on version of the game that we were provided with. We have not been paid for the preview. We also do not provide a full play by play explanation of the game, so not all mechanics may be mentioned in the preview. 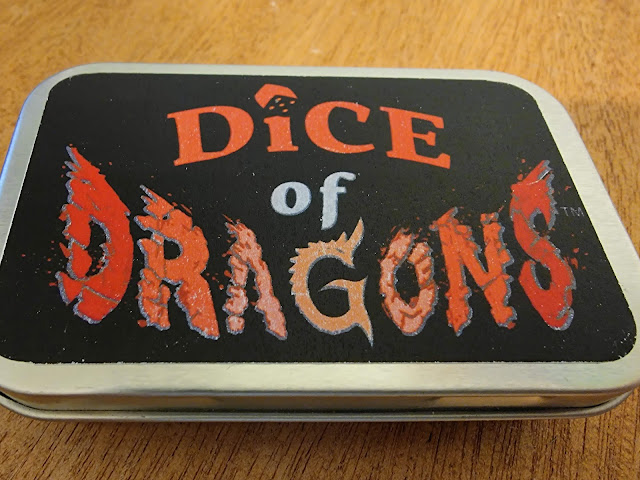 I have a confession to make.
As much as I would be the first to roll my eyes and raise my eyebrows at the thought of playing dice game where chance is the main staple of the game. I must admit that through the last ten years or so, I do like playing them. Give me some Destiny and Ashes: Rise of the Phoenixborn over Magic every single time. Dice Forge delighted me, Steampunk Rally is a blast. Coraquest and Cubitos produced wild moments and cheers when things rolled the right way. Did I mention King of Tokyo and those chunkiest of chunks clattering across a table? I'm slowly becoming a fan of Roll and Writes over time. The thought of tackling another dice game gives me pause to smile. 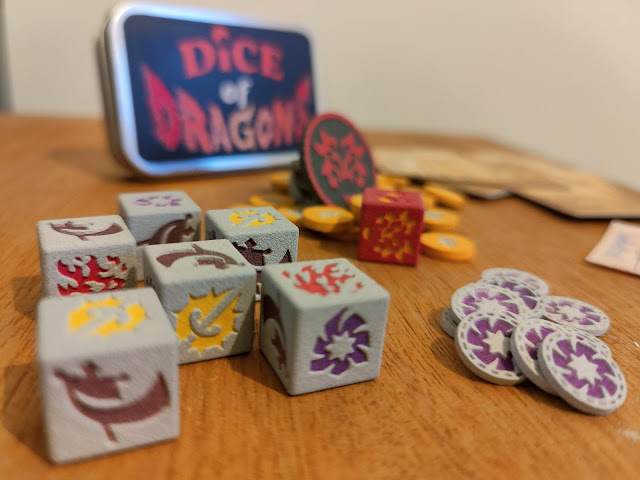 Thing 12 Games is no stranger to six sided mechanics. For both it's previous games, Dice of Crowns and Dice of Pirates, you were cascading for cutlasses and crowns, all contained within the smallest of mint tins. A portable pocket playable pastime, both successfully funded on Kickstarter, and both sitting on shelves and collections worldwide. It was only a matter of time before the fantasy genre pitched up, and this time, your quest is to take on a dragon and pilfer its gold. As everyone knows that there is nothing more wretched than a dragon who is light in the useless shiny metal department. Unlike previous games, which were directly competitive, Dice of Dragons has you working together to defeat your foe, taking turns to roll symbols to steal the gold from your scaly enemy. 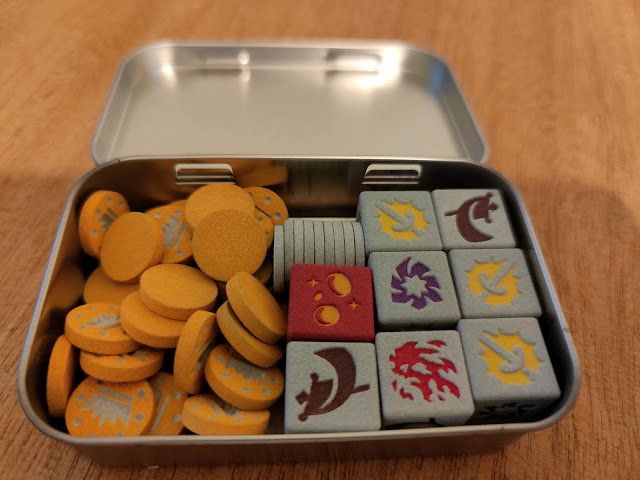 Depending on the number of players, you'll take character cards that will grant you special skills if you roll enough shields. If you roll swords it will equal a direct attack that will damage the dragon and remove some of the gold from the hoard. Beware that successfully attacking the dragon results in gaining its attention and it moves onto your character card, waiting patiently until the end of your next turn where it will attempt some homemade hero barbecue. You can keep rolling as long as you want to and you can pass banners on to other players for them to reroll. Beware though, if you roll three flames then the Dragon attacks immediately and steals life and gold equal to the current number on its dice.
Characters have their own special attacks and skills that they can call on and they are based on rolling the most number of swords in order to achieve the more meaty attacks. I was surprised there weren't more differences in the combinations of swords and shields to represent the types of characters, but I'm guessing as the roster grows, you want to keep things simplistic. 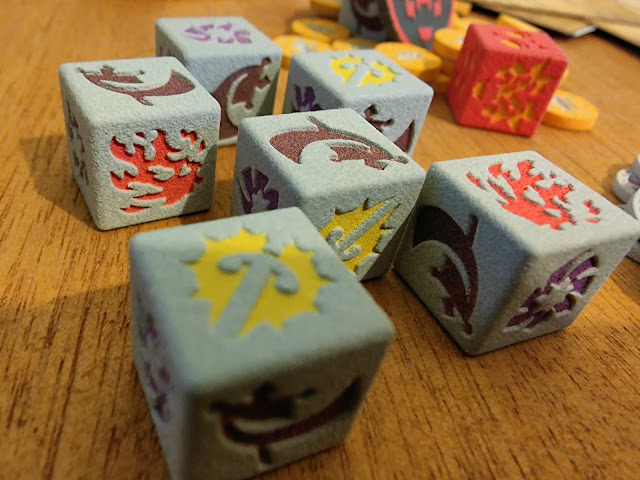 You are constantly trying to balance up the decisions on whether to try to push on rolling and getting lucky or rolling and potentially knocking yourself out of the game. While player elimination isn't the be all and end all, you're then relying on the good grace of the dice gods to help you appear back in the game and it can be tricky to roll the right combination. If you suffer a touch of bad luck, its not unusual to sit out of several rounds, which can be frustrating in higher player counts as you'll have less characters to control. 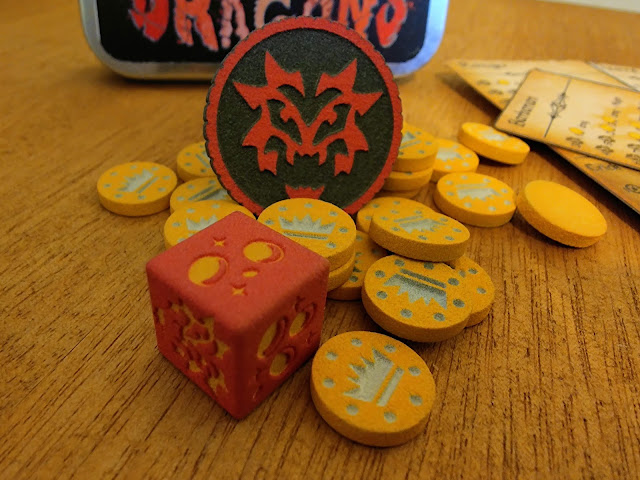 I'm currently not 100% on board with the change in direction in making Dice of Dragons cooperative as opposed to competitive. The reason for this is simply timing. Dice of Dragons could be called Dice of Drags On if you happen to fall fowl of a few rounds of bad choices or poor rolling. For such a small game in such a sweet mint tin, I was surprised when a few times we were easily breaking the 30 minute play time before we were realistically making a sizeable dent in the Dragon's fortune. I think that having the Dragon's damage hitting as high as a six, and the heroes not hitting as high as that means that it can be very easy for the Dragon to do some major damage to the party, even knocking a few of them out, and I wonder if it might better to cap the maximum damage based on the difficulty in order to keep the game much shorter. Once you're heading towards an hours play time, it's tricky not to think you're going through a war of attrition and it's too easy to end up back at stage one again. That being said, when things line up, and the Dragon's attacks are being prevented and weakened, there's a real sense of achievement. There isn't anything that can't be solved with some further tinkering and the addition of potential handicaps for the Dragon and it's more frustrating than a failure on the design side. 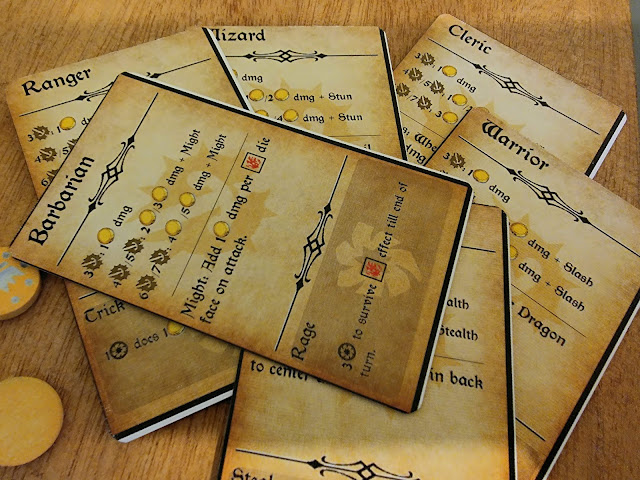 With the chances of there being more characters to play and more Epic Dragons to feature in the finished game, Dice of Dragons has the potential to be a fun way to spend an hour chucking cubes and breathing fire. It's a departure from the previous games in the series, but Thing12 has a history of delivering fun compact experiences and I'm hopeful these kinks will be ironed out. It doesn't take time to set up or put away and like the others in the series, there's not a huge learning curve here. With repeated plays you'll discover you favourite characters and then you'll be up to your eyes in gold.
You can check out the campaign by visiting https://www.kickstarter.com/projects/thing12games/dice-of-dragons
If you would like to support more written pieces on the blog then please consider backing us on Patreon. www.patreon.com/werenotwizards
Dice of Dragons kickstarter preview Thing12 Games