on May 05, 2021
This review is based on the final retail version of the game provided to us by the designer and publisher. We were not paid for this review. We give a general overview of the gameplay and so not all of the mechanical aspects of the game may be mentioned. 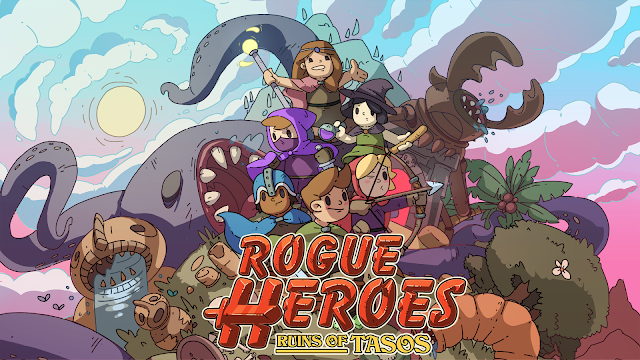 There's a saying about managing expectations. When you're putting a creation out there to the masses and you're relying on the feedback of the bungled and the botched to measure if you got things right then be prepared for disappointment. Especially if that creation presses the nostalgia buttons for your audience.
I see this more in videogames then I do in board games funnily enough, I've never seen a huge backlash for a board game that was similar to another game of the same mechanical genre even if they could almost be cardboard cousins. I don't know if it's because board gamers like more of the same, but are happy as long as the core similarities are represented well. In videogames, if you give the bold impression your trying to emulate a much loved intellectual property, then you damn well better hit those beats to perfection. I've seen so many 'souls-likes' kicked to the curb and derided because they weren't really even close to being Souls-Like. They stepped up and fell down the well.
If I were to say to you that you are able to hit cute looking bushes with your cute looking sword, and cute looking things appear for you to collect, then maybe you'll guess what hugely beloved and famous IP Rogue Heroes will remind you of. If I tell you that you will be finding dungeons on a huge overhead map where you'll defeat a boss to move on and open up unexplored areas then maybe you'll start to see the Link. If I mention you'll get your hands on a boomerang, bombs and even a grapple hook, then yeah, I can already see you wondering why are they bothering. I mean, who tries to take on a giant by merely wearing stilts and a long trench coat and hoping no one notices? In this type of situation you only survive by going Rogue. 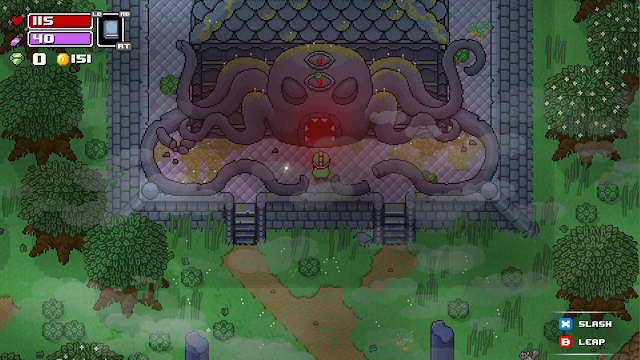 Going rogue is what Rogue Heroes have done. Its works really really well for what it does. It perhaps spends too long getting to the parts that stop you dismissing it as some kind of cut down pound shop Zelda clone. This is closer to the older SNES classics like Terranigma and Secret of Mana, where you're closer to playing an RPG than an out and out action game. Yes, you'll be playing dungeons to progress, but just like Hades or Dead Cells, each time you hit the dungeon then the rooms will be the same but the layout across the three or so floors will be fundamentally different as they are procedurally generated. 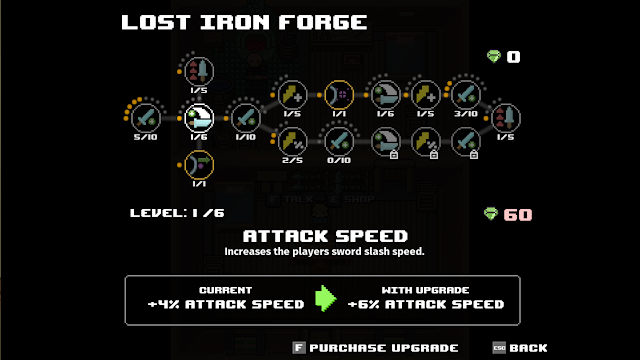 At the beginning, the game is tough, because your swordplay is weak and your familiarity with the enemies is poor. You'll often find yourself killed fairly quickly and end up back in bed in your house. However, any gems that you collect on your journey can be used to upgrade you stats, or build houses that will encourage new skilled residents to join your village. Over time you'll bring in a seamstress who will make you new outfits to change your class. You'll improve your sword game and become quicker and stronger. Then, you'll head back in the dungeon, sacrificing any left over jewels to take the trip inside once again. But maybe this time you've unlock the stairway straight to the third floor and so you're journey to the big bad isn't as taxing. This time you might just run the whole dungeon to pick up the temporary glass weapons that will help you on your quest. It's not punishing enough to annoy you when you do fail, because even if you do then you'll have gems to spend on improving for the next run. Yeah, you'll make the occasional silly mistake, and the snakes will get lucky, or the order of the rooms wont be in your favour. Rogue Heroes isn't here to wind you up like maybe Dead Cells did with impossible situations and long repetitive runs back to a boss to learn attack patterns. 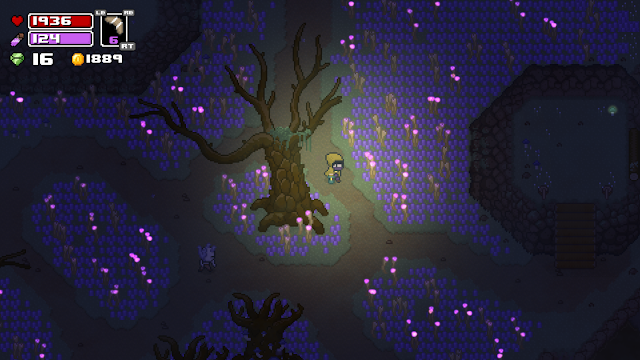 You don't need to suffer alone either. You can team up with other players and tackle the challenge together in up to four players at once, and Rogue Heroes supports all of the various controller configurations, it's pretty easy to get a game set up and going within a matter of minutes. It adds an extra dimension to the game as you run around together kick ass and taking names and fighting over jewels and treasure. It's certainly worth a few hours of your time and when's the last time you had the chance to enjoy some couch co-op?
Surrounding it all are the options to make changes to your situation. You have different classes to play as as the game progresses, so if you insist on being a thief, then you can. If you want to hit steel as a knight, then you'll eventually have the outfit to do so. You can make some money growing and selling vegetables, and use the proceeds to improve the interior of your own house. Simple side quests will open up as you explore, but nothing that requires you to be doing anything special apart from being in the right place to activate the right dialogue from the NPC.
Graphically, you are in the Stardew Valley / Link to the Past wheelhouse, and if that is your bag, then you're going to love the oh so cutesy graphics on offer here. There's smart touches like the gems slowly fading if they aren't collected so they leave light trails as they fade. There's the scatter of leaves when you cut down the grass. There's a huge range of different types of dogs on offer and yes, you can pet them if you want to. Environments change as expected as you explore the land and each have their own set of monsters and NPC to encounter, enjoy and sometimes kill. It's clear there has been a lot of love poured into adding all these additional touches to make Rogues Heroes work and it does show in the end product. 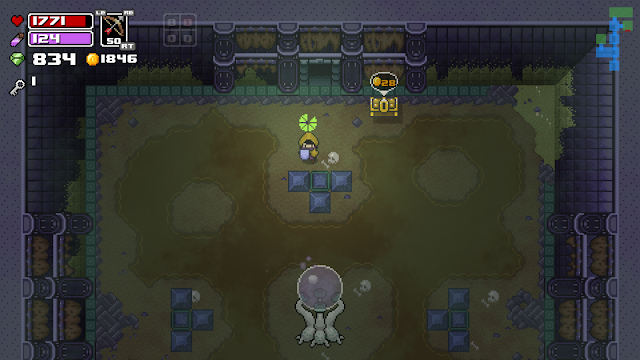 It's a game you'll stick 30 minutes into at lunchtime while you're working from home, or an evening when you're looking for something to do that isn't going to cause you a pile or stress just to play. There's a gentle rhythm as you play and due to the way the reincarnation system works, even if you do end up a cropper after a huge bout of exploring, you'll never feel entirely robbed. You'll simply dust yourself down, get out of bed, grab your sword and head out.
Rogue Heroes: Ruins of Tasos is a smart 16-bit looking Rogue Dungeon adventure that has enough going for it to keep you coming back to it again and again. It might deceive you at first with its looks, but there is more here then it first implies, and it continues to unlock more gameplay treats and time goes on. A surprising deep fun gem for the Switch.

Release Date : 23 February 2021
Developer: Heliocentric Studios
Publisher: Team17
Platforms: Nintendo Switch, Microsoft Windows
If you would like to support more written pieces on the blog then please consider backing us on Patreon. www.patreon.com/werenotwizards