on March 04, 2021
We played this version of the game using Tabletop Simulator on Steam, so the art, rules and mechanics may possibly be subject to change. Therefore please treat this as a first thoughts piece, based on version of the game that we played with. We played the session with a representative from Alley Cat Games. We have not been paid for the preview. We also do not provide a full play by play explanation of the game, so not all mechanics may be mentioned in the Preview. Eternal Palace is coming to Kickstarter on the 8th March. 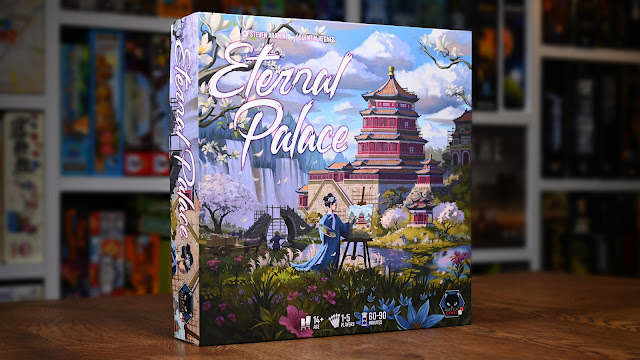 The main board of a tabletop game can be the ultimate in smoke and mirrors. It can completely trick you into thinking you're about to step into something extremely complicated. Or it gives you the impression, like the almost coaster sized board for King of Tokyo, that you're only going to need minimum brain power in order to tackle the rolling of dice and kicking of monster butt. In the case when you're looking at a game online, where the board sits out in front of you while you are waiting to play, your brain gets the chance to go into assumption overdrive. In the case of Eternal Palace, with its multiple little lanes and resource icons, I was ready to tap out even before I picked up the dice. I'm a doer when it comes to learning, and so the five minute explanation kind of went in one ear, and even though I tipped my head, slipped out the other side. I wanted to crack on, I wanted to be lost and confused by these cards and the dice and all the little bags that were lined up at the side of the board. Luckily, Dan who was going to be my guide, understood when he was dealing with an idiot and so pressed on, before I fell over and mashed my face off the keyboard. 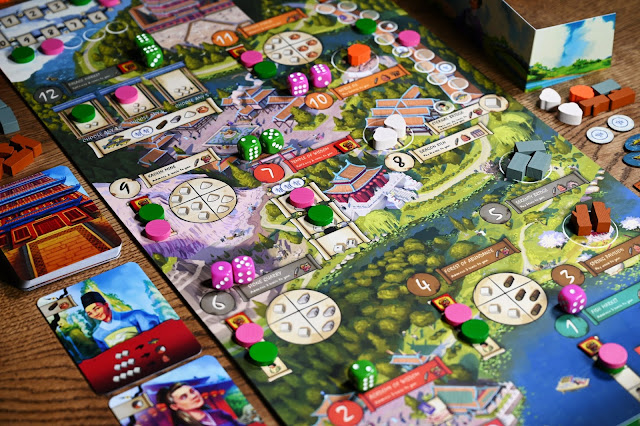 In Eternal Palace, you're trying to gain the favour of the current Emperor, and you do this by constructing monuments to show how great they are, and in turn you'll slowly be building up miniature paintings by collecting scenery and parts of the painting as you go. I'm told that in the real game, you'll be building up the painting on a miniature easel, in which the layers will add depth and background to construct a majestic final result. Unfortunately on Tabletop Simulator, that part wasn't available, which was a shame, but such are the wonders of modern technology.
There's a mix of mechanics to play with in Eternal Palace, and while the board gives the impression of being something busy and daunting, when it gets down to brass tacks, you're only just rolling dice and placing those dice on different parts of the board. There are monuments that will need built, resources to collect and the Eternal Bridge itself to traverse. There are advisors to collect in the form of dice that will create miniature resource engines that become important as you play through the game. Oh, you're also racing to be the first the grab the feature tokens which add special extras to your pictures and therefore points at the end of the game. 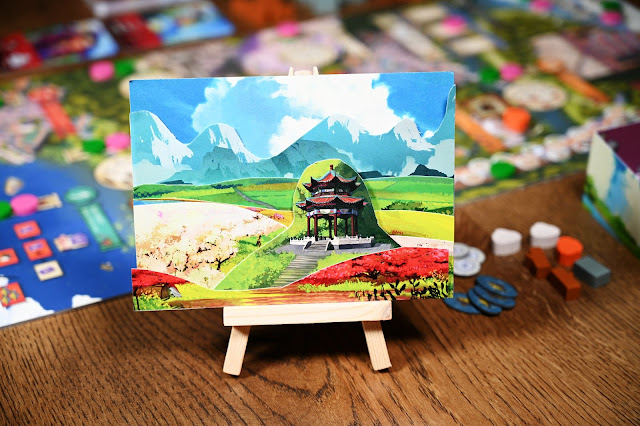 I say 'just rolling dice' but there's cunning involved as well. You'll roll your three dice that you begin the game with and everyone will see what you roll, but then, you'll group them together behind your own screen to decide what you're going to do. So if you roll a 3, 5 and 6. You can then go to space 3, 5 or 6.. but, you could also go to space 8, or 9, or 11 if you group your dice together. When you first start to play, you'll be just trying to figure out the combinations that you can go to. As the game progresses, you'll be sideways glancing at who you're playing against in case they might have the same combination to you, and whether they might end up in the same track, and that often results in paying fish. Don't worry, it will all become clear in time.
If you don't get the rolls you want then you have the chance to trade in wisdom to alter the pips on the dice in order to get the result you do need, which as the game progresses, you'll end up tearing through at an alarming rate. Eternal Palace does that interesting thing where the main mechanic at the beginning is the be all and end all, and its fine, because for the first couple of rounds, there's little chance of anyone making huge progress as you're all starting from scratch. As you progress, the dice become something that need to mitigated for your to achieve your goal, and so it's important to make sure you stock up on advisors to keep the resources and the wisdom flowing. Many of the advisors allow you to trade, but at the expense of giving resources to another player. 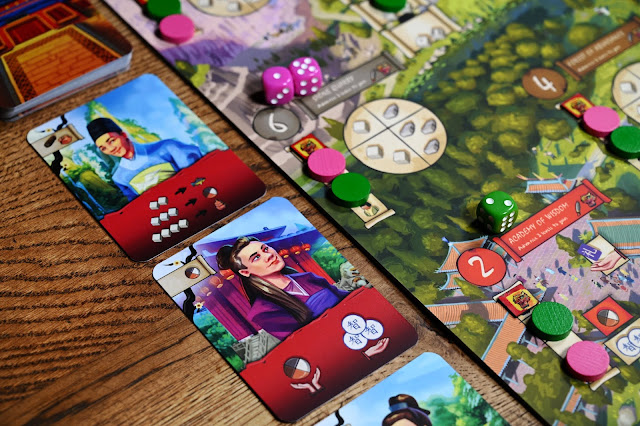 Even with me only sampling the two player game, there was still plenty of interaction between us, sometimes deliberate, as you forced the others to revisit a monument space to win it back, or made them have to make a move to try to block you from grabbing one of the essential feature pieces. It was only at the very end of the game when you felt you were completely out of options, but that was only because everything had been claimed. Even when the game was completed, which took just under an hour, the final point tally was only a meagre difference of four points, which suggests that in larger player numbers every space, location and art piece you manage to win is going to count towards a victory. 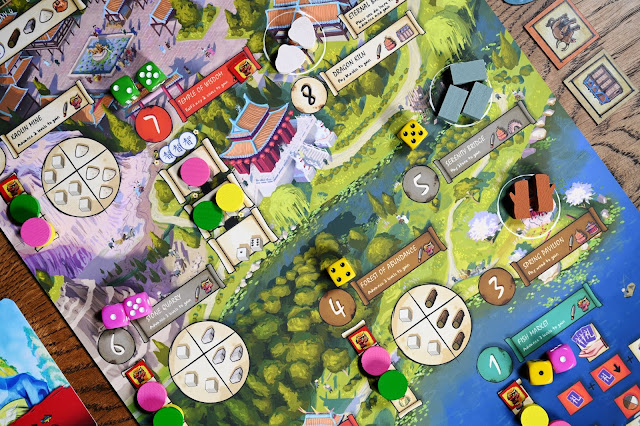 What surprised me the most about Eternal Palace was that it gave the impression of something that was going to be far more complicated than it was. Even with you having to keep an eye on your opponents, running a side tableau of advisors and managing your resources, I never felt confused by what I should have been doing, and it's much more accessible than first impressions would suggest. It's not as crunchy as I expected, so even those looking for something above the normal casual affair should get on with this quite well. For those used to something heavier, it's going to sit as a decent thinky starter before a much heavier main meal. The game took about a hour to play, just at that important point where the tensions were high and final points were there to be claimed, and then it was all over in reasonable time. I liked the mixture of dice and worker placement, I liked the miniature race mechanic that forced players to interact and deviate from their own predetermined plans. I absolutely can't wait to see the final easel and picture set up in physical form with the various art layers as you play.
Overall I left with very positive impressions of what Eternal Palace is bringing to the table. It's mixture of dice rolling, track racing and resource management is accessible and fun to play, easy to learn and it has the potential to be stunning looking when it hits the table in its physical form.
You can check out information on Eternal Palace by going to
https://www.kickstarter.com/projects/alleycatgames/eternal-palace-a-dice-placement-and-painting-euro-game
If you would like to support more written pieces on the blog then please consider backing us on Patreon. www.patreon.com/werenotwizards
Alley Cat Games Eternal Palace kickstarter preview TTS Preview