This is the pre-production version of Merchants of Infinity, so the art, rules and mechanics may be subject to change over the next couple of months. Therefore please treat this as a first thoughts piece, based on version of the game that we were provided with. We have not been paid for the preview. We also do not provide a full play by play explanation of the game, so not all mechanics may be mentioned in the preview. 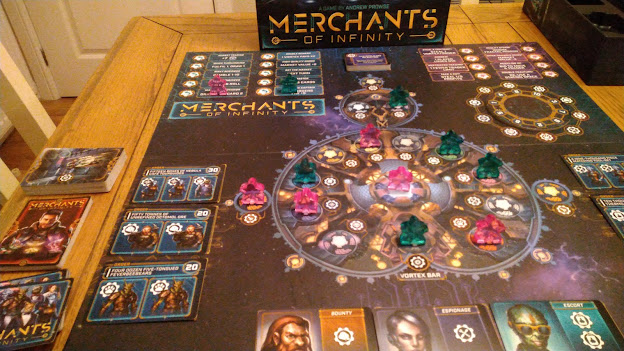 Of all the genres of games that are available, worker placement remains one of my favourites. Whether it be growing the vine in Viticulture, creating Jurassic chaos in Dinogenics or even completing quests in Waterdeep, placing meeples for actions has always scratched that tactical itch for me. I like the pace it creates, I also like that you can plan ahead and have those blessed moments where three turns of planning comes together like a dream and you're knocking points and opponents out of the park and into victory.

Andrew Prowse is attempting to draw you into the deepest boundaries of space. With their latest game Merchants of Infinity, it is trying to have you place workers, manage your resources and potentially become the richest trader in the galaxy. You'll do this by making sure you have the right goods at the right time to fulfil contracts or orders, with a trading safety net should you not be able to effectively trade to your desired plans. Every round you'll have a number of traders that you can place on various parts of the board representing the Mandelbrot space station, but only able to claim three goods for that round, with the other trader meeples being used for actions that mostly involve trading in goods for money. 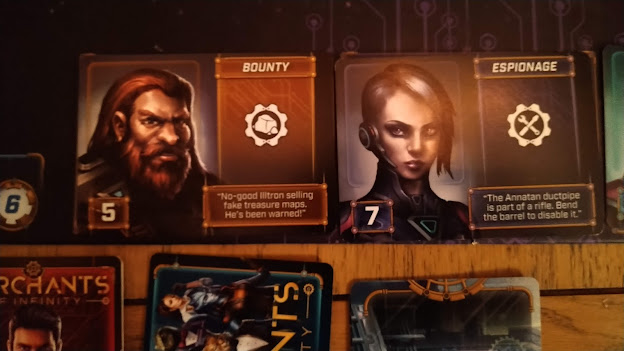 In most of the worker placement games I've played, the decision over who is the first player is one of the most important ones in the game and Merchants of Infinity is no different. The first player being decided through a simple card game called COGS. Players play cards of value in order to have the highest total and claim the highest score. Some of the cards will have positive and negative effects on either your own on opponents scores and some will even force swapping of hands. It's a well thought out and surprising addition to the game that I didn't expect. Sometimes it offers a welcome distraction to what is happening in the main game, though as the game progresses and you want to play out your move for that round, sometimes it feels it gets in the way of the natural flow of the game, and it was kept in because it is a unique mechanic and it would have been a bit of a waste to ditch it. 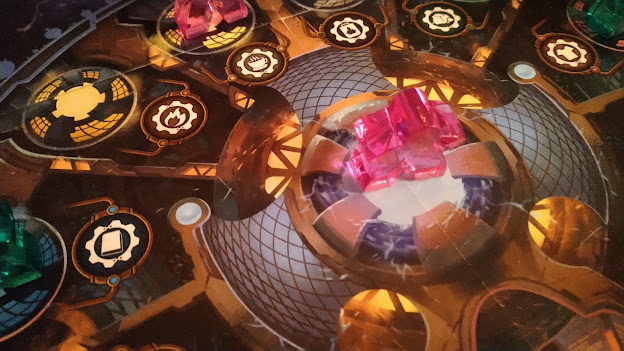 There are so many choices here in Merchants, and it isn't bloat, because that would suggest that there are things added in order to bulk something out because there is something lacking. Its almost the opposite in a round of Merchants as you could be placing meeples to carry out so many different actions, it is almost dizzying. If you want an auction, it is there. If you want to trade in goods at and spaceport, draft in an extra worker, draft more cards, cut a deal with an NPC, trade at the local space port, then it is all there. There is so much, that it borders occasionally on overwhelming, and you'll be referring to the rule book for at least the first couple of games to keep you right.

At the beginning of every round, a fractal card is played that will remove one of the action spaces that can be played, it adds a welcome tension to the beginning of each round that can sometimes put a major spanner in the works. I do think in lower player counts it would be good to draw more than one Fractal card to increase the challenge as there are so many spaces that are there to be filled and actioned. 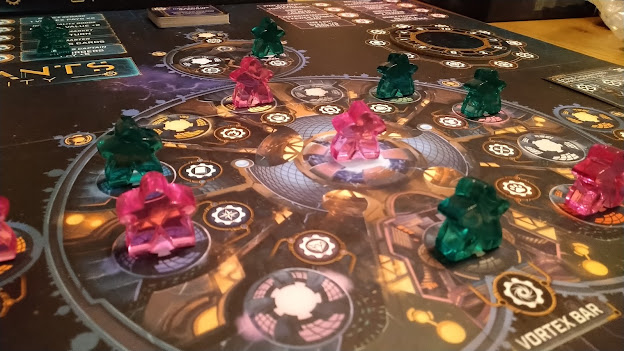 Merchants needs you to react to the situation that particular round presents you with. While you might have a small supply of cards that might offer you some alternatives, you are always going to try to second guess what you opponents possible plans are and execute accordingly. You only ever score on the goods that you can gather on that round, never building up a supply that can be traded in later on. So for those used to the bigger longer term payoff, there are going to be some hard and immediate lessons that will have to be learned in order to succeed in Merchants.

Like many other worker placement games, larger player counts are where the most fun is to be had, as it pushes out the more competitive nature of the game. While two player is possible, even with the restricted number of goods collection put in place, it is relatively easy to play several rounds without needing to encroach on each others' spaces. You ramp that up and start to hit four players, then the gloves come off, and with the use of the treacherous Nova spaces, things can really start to heat up and Merchants will really start to shine. 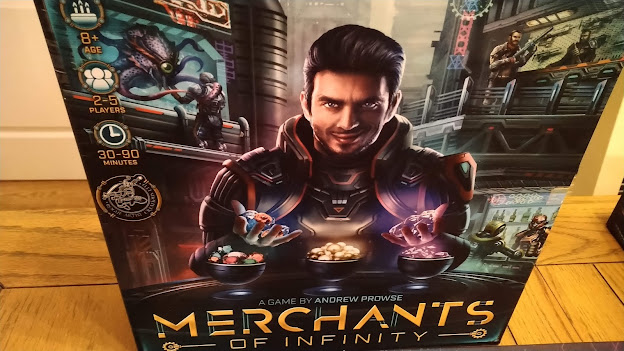 Merchants of Infinity smashes on the to table with a brave attempt to bring a mix of ideas to the worker placement space. There's a lot of heart here and it's been designed by someone who really likes the Worker Placement genre so much, they wanted to bring every idea they could to their own spin on things. The production is excellent, oozing theme across the board and the cards, to the point where the preview is extremely close to the final version of the game that I didn't realise it was until I read the notes from the designer.

For those looking for something slightly different from this area of tabletop, for those who are looking to live in the now instead of five turns time. For those who want a plethora of choice that means that every game has the potential to be completely different, the maybe you should get this to the table, and beyond.

You can find out more about Merchants of Infinity by visiting https://www.rogueartistcreations.com/