on August 01, 2020
This is the pre-production version of the Swatch, so the art, rules and mechanics may be subject to change over the next couple of months. Therefore please treat this as a first thoughts piece, based on version of the game that we were provided with. We have not been paid for the preview. We also do not provide a full play by play explanation of the game, so not all mechanics may be mentioned in the preview. 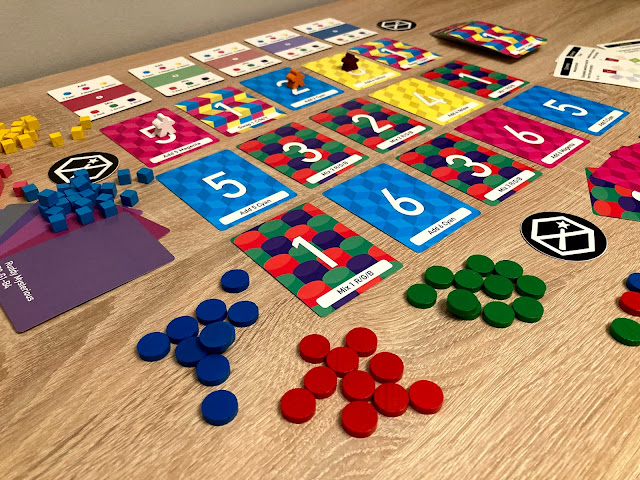 The competitive nature of a creative design agency, where designers aim to complete their brief while
staring sideways at others in the office. Where resources are sparse and so every time some gets up for coffee, there's a ripple of potential movement across the rest of the team, hoping they are not about to snag that all important last colour in order to create the ultimate colour scheme. Everyone is aware that there are no prizes for second place here, there's no runner up version of the bosses' handshake, there's no mug that says 'I almost made it'. This is the world of Swatch, and this is where the competition and the language might get very colourful indeed. 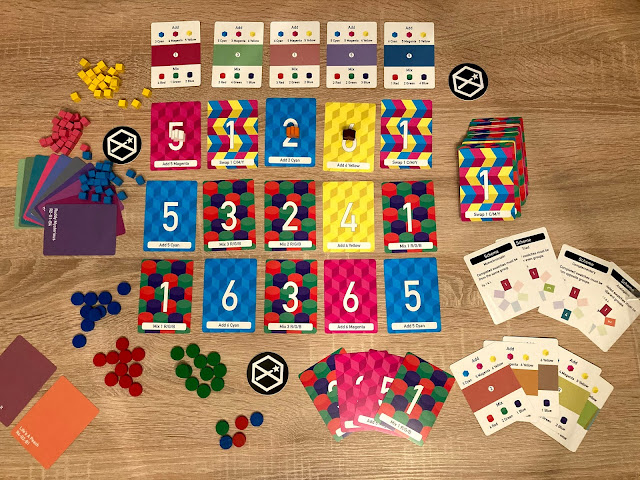 The premise is actually very simple, there are a number of colour swatches that need to be created by combining Red, Green and Blue in various quantities, and those colours in turn are created by mixing quantities of Yellow, Magenta and Cyan. Yeah. You read that right, Minerva decide to hit us with some proper colour theory, and the real primary colours are there on the table to be used instead of the blatant lies you were told about when you were a kid. The swatches have such interesting names as "Bubblegum Charlie", "Nothing Rhymes With" and  "Cactus Jack" with some frankly lovely looking colours on the back of each card, and as you play, you flip the cards open on completion, to give your space a delightful palette in front of you as you go.
Swatch follows similar mechanics when it comes to card selection to Kingdomino. Everyone draws a card at the beginning of the round, but then in order to select another card, they choose from a row of five cards laid out from left right, where they place a meeple artist to mark which card they want to either take, use or discard. The layout contains a total of fifteen cards, with three rows to choose from as you play through the round. Once all the cards have been decided by the players, the player furthest to the left in the row will then get first choice to where they place their 'artist' in the next round. I actually found that I set out the cards in columns, so it was similar to Kingdomino, and I found it worked very well too. 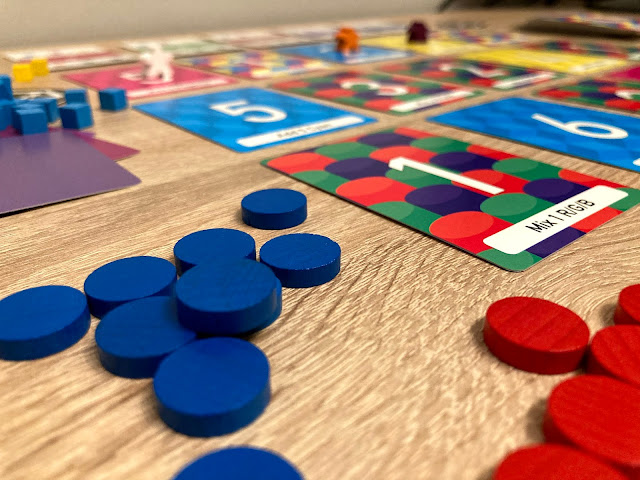 You can play actions to mix colours together, or swap colours with other players, or mix some of your base palette to create the secondary Red, Blue and Green, providing you have the card that allows you to play that particular action. At any point if you have the ability to complete a swatch, then you can trade in the colours you have created in order to fulfil a swatch and collect it. However, it all depends on the scheme that you have selected. The Scheme decides which swatches you are allowed to complete, and have rules that you need to follow in order to fulfil their requirements. The trick being that the Schemes are kept as hidden information in the game, and so players aren't always chasing the same swatches in order to win. So there's a decent level of guess work and strategy required in order to try to keep one move ahead of your opponent. 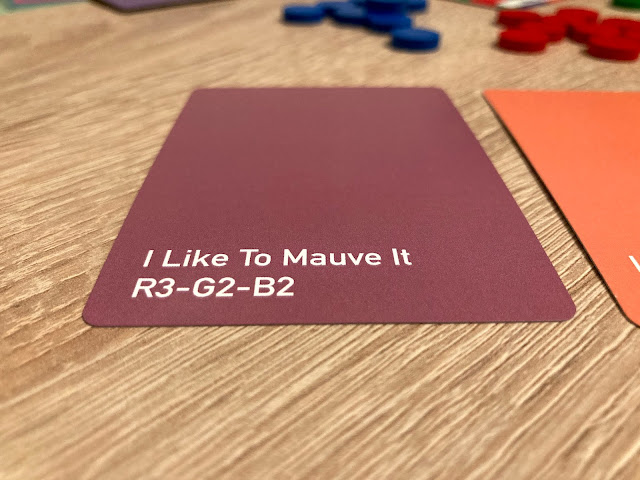 Also at the same time, you have to be measured in your approach, as simply gathering as many colours as possible in order to overstock you requirements and finish early, won't result in end of game and victory. Minerva have added in a mechanic that if you have colours left after completing your last swatch then you aren't finished and need to play more rounds to remove any spare colours you have left. It pushes you to play in a considered and measured fashion, and keeps everyone in the race until the very end of the game. 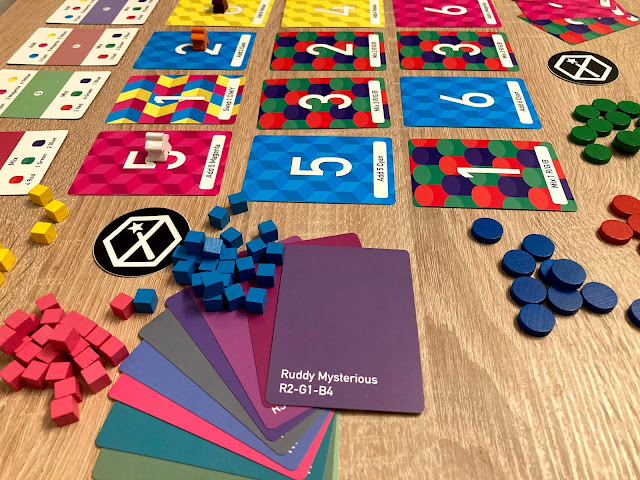 There's a lot of thought here from designer Scott James. Here's a game with a simple concept, simple execution, but with a lot of subtle layers that only come from someone sitting there and playtesting a game again and again and again. Swatch isn't a game where four players will sit round the same table rushing to finish with a lack of interaction that you see in so many other similar games. If you want to play cut throat then you can, if you want to take cards from others then you're encouraged. If you want to grab cards only to discard them then you can even cackle away as you do it. It's funny, but little things like that are really noticeable after you've played the umpteenth game where you are meant to be competing but you might as well be playing completely different games. 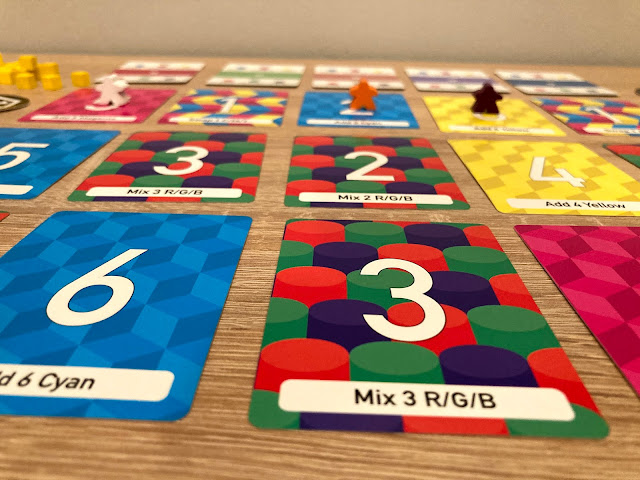 It also looks great on the table, with a full game looking striking once all the components are laid out and the game gets going. There's nothing here that breaks the under lying theme, everything is clean and well designed with nothing quirky or out of place. It's a competitive take on resource management with some slight deck collection and player control. There's a lot of thought gone into the game from Scott James, and it's testament to the version we had the chance to play. You might check out Swatch to see if it fits your colour scheme, though I reckon you'll end up ordering an entire roll of the stuff.
I'm very impressed indeed.
Designer - Scott James
Players - 1 to 4
Publisher - Minerva Tabletop Games
You can back Swatch HERE
You can find out more about the game at https://www.minervatabletop.co.uk/swatch
You can join their Facebook page on https://www.facebook.com/MINERVAtabletop/
Their Twitter can be found on - https://twitter.com/MINERVAtabletop
If you would like to support more written pieces on the blog then please consider backing us on Patreon. www.patreon.com/werenotwizards
kickstarter Minerva Tabletop Games Scott James Swatch