on July 12, 2020
This is the pre-production version of the Ravage: Swamps of Delgor, so the art, rules and mechanics may be subject to change over the next couple of months. We were provided a couple of scenarios of the game. Therefore please treat this as a first thoughts piece, based on version of the game that we were provided with. We have not been paid for the preview. We also do not provide a full play by play explanation of the game due to possible spoilers. 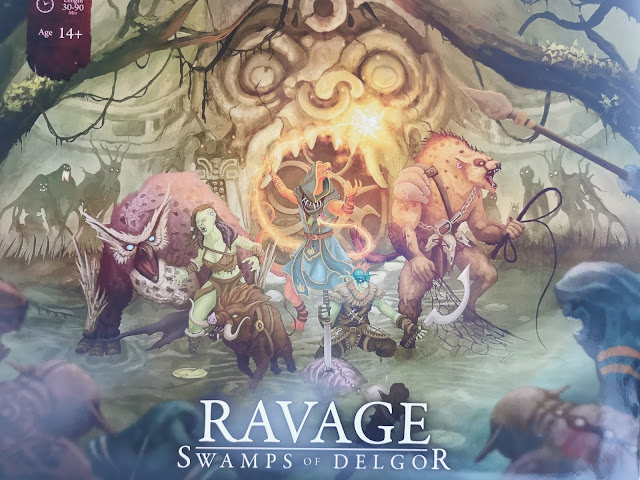 Did you and your band of ne'er do wells survive the Dungeons of Plunder? Well, soon you'll be able to enter the Swamps of Delgor with your band of misfits and see how many faces you can bash in to liberate them of their teef (which acts as the in-game currency) and scoop up any treasure in the process.

Now while I have played Dungeons of Plunder, it was several years ago and age does not come alone so I only recall the bare bones of the game. I treated this preview/prototype copy of the game as a new experience and did not look at any content for the original game so I was coming at this with fresh eyes. So it was with a spring in their step and thoughts of many teef that Khorgorg Grimmspear the Gnoll Trapper and Nenk Shadowblades the Goblin Assassin headed into the swamps in search of adventure (and some killing and a quick buck). 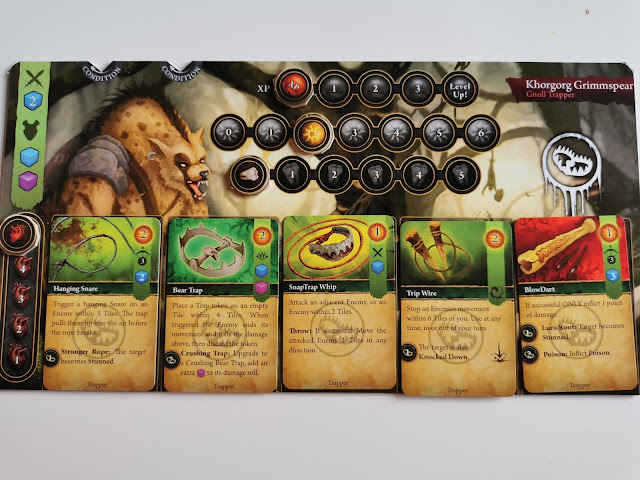 Swamps of Delgor is pitched as a sequel to the original game and while the original is not required to play the items, characters and monsters can be used to create a fully customisable game. In the prototype there were two quests available and this band of villains headed into the Heart of Thorns several times. Character XP, Energy, Teef and Health are all set on the character board and a number of skill cards which can represent additional weapons and traps, for example, to aid on the adventure. Each player also selects a caste type which will provide additional skills to be used. Caste cards are double sided so this adds some variety to the gameplay.

A start card is played on the table and the hero miniatures places on the starting card. Subsequent map cards are drawn from a Delve deck. Enemies and traps may be drawn from a Seek Glory deck, while the Sneaky Goblin deck will provide items that aid in your nefarious schemes like bandages or the tempting Rat on a stick. A turns consists of 8 phases. The first two phases will not apply to each player, however. Fire tokens are flipped by the first player only, then tokens are drawn by castes that require them, then play moves onto phases each player will undertake. Time passes, Delve, Seek Glory, Ravage, Bloodshed and Gather Strength. 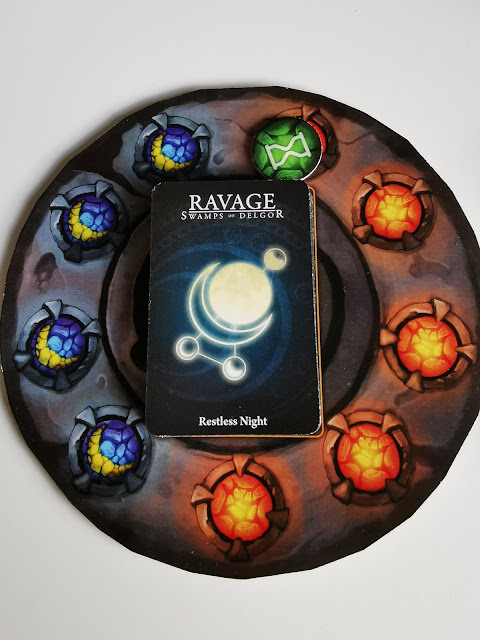 The Time Passes step is like a timer in the game. While you are moving through the swamp during the day you are relatively safe bar any monsters or traps that you may encounter, but once night falls you are really going to be in trouble. If you move the time counter onto a night space you must draw a Restless Night card and suffer the penalties on them. Almost every time my party drew from this deck, nasty things happened. Monsters can move to attack out of turn, you can become wounded, you can suffer penalties to your attack and defence values. In short, nothing good happens at night in the Swamps of Delgor. 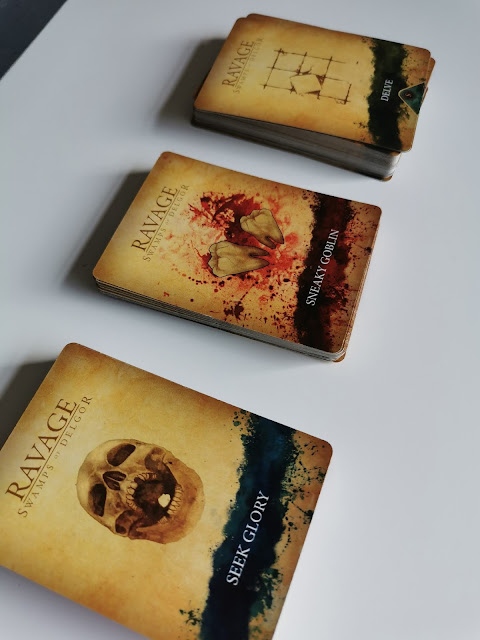 The next step is to Delve and this allows you to draw a new map card and place it on the board, following placement rules. Sometimes a special location may be drawn and if this happens a set aside set of map tiles is placed showing the layout of the room. In the quest I played through I reached the Glade and specific enemies were placed according to a dice roll which again adds another level of variety to each playthrough. Next players Seek Glory and this can result in a monster being drawn or a trap being encountered. 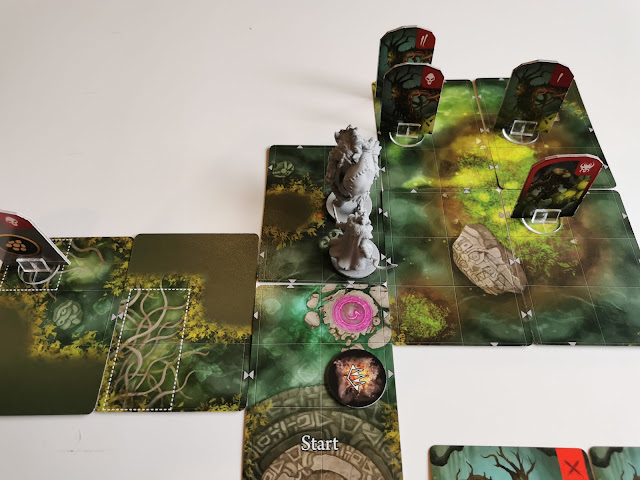 The Ravage step is where players will decide what actions they are taking. At this stage you can move (up to 4 tiles with some terrain causing 2 moves to be used if they are crossed), attack, pick up items, trade, pay blood tribute (basically injure yourself to gain energy) or search for plunder. This was where I spent most of time trying to fight the monsters in the swamp and failing. My Goblin Assassin did have a crossbow though, so I was able to attack at range quite often but my shooting was like a Stormtrooper and didn't slow down the enemies enough meaning I was killed and the quest failed on the first two attempts. 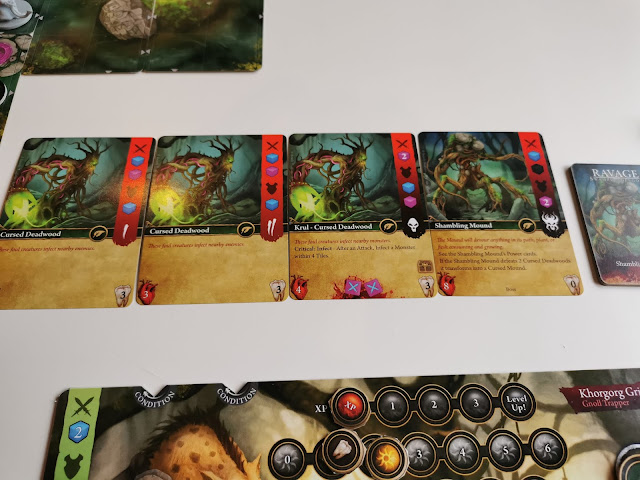 Third time is the charm though and my party made it to the Glade, barely. Both characters were wounded reaching it and when they arrived they were greeted with 4 enemies locked in a battle themselves. 3 Cursed Deadwoods seemed to have it in for a Shambling Mound. Time was of the essence as we couldn't allow either side to win so the only solution was to try and kill everything and the party went at it with some enthusiasm. Two Cursed Deadwoods were dispatched relatively quickly. The Shambling Mound had suffered some damage though. Through luck more than skill it has to be said the final Deadwood was made, well, dead and my party closed in on the Shambling Mound. Our task was to retrieve its heart and that we did. Never mind it only had two health left when we turned our focus on it, it was a glorious victory as we shot it in the back and killed it!

Combat was good fun. Chucking dice is always fun for me and this was no different. Combat was distilled down to rolling dice depending on your character or weapon you are using. Similarly, each enemy had attack and defence values which told you how many and which colour of dice to use. The colours representing different strengths of attack. Roll your dice, count the swords and highest number wins the combat with the net difference resulting in that many wounds. The unveiling of the map through the delve deck was good as well, really hitting the theme of entering the unknown and danger at every turn and the Seek Glory step kept the danger coming thick and fast. 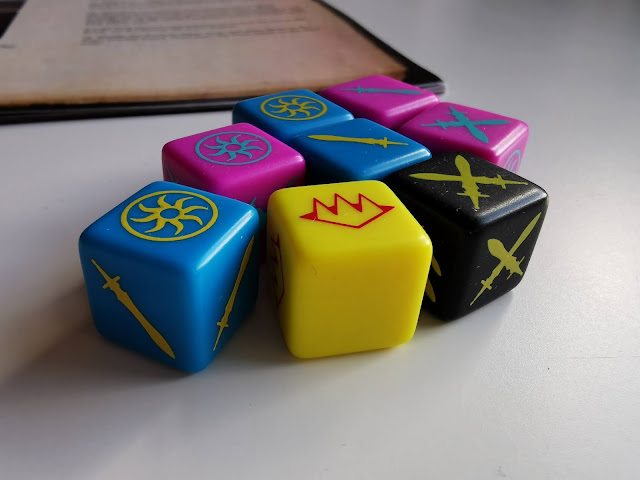 Overall, I really enjoyed Ravage: Swamps of Delgor. The game had a good tempo and wasn't overburdened by complicated rules. That's not to say there wasn't a lot of variety and nuance to the gameplay. I felt like I had decisions to make every turn. Whether to attack, lay traps, try and find plunder to aid the quest or to move and try and find the Glade as soon as possible. Games were relatively quick playing solo as well and once I got into the flow of the game the sense of urgency I got from the game was great and added atmosphere, especially when it was night time. I would say from this brilliantly made prototype (seriously, I've seen worse looking games for sale) that this is definitely one to watch out for. Also if you've played the first game and enjoyed it, you'll also be wanting to keep an eye on this hitting Kickstarter, which it is currently due to do sometime this year.

Full disclosure: as mentioned a few times above, we were provided a prototype copy of the game for this preview. As I'm sure you know this means everything in the images used may be subject to change.

Links:
BGG page
Beard Brothers Ltd website
If you would like to support more written pieces on the blog then please consider backing us on Patreon. www.patreon.com/werenotwizards