It's like opening a box of doughnuts, but the doughnuts are in a cardboard box and there isn't one of those clear plastic windows that you can see inside. In this case you open the box and you think you've been faced with six boring old jam doughnuts, but then on lifting one of them up and taking a bite, you realise that you've opened the box upside down, because you've seen boxes like this before, and you've assumed that's how these things work. You have to admit to yourself that you got it wrong, but at least you've got a delicious doughnut, even if you have now got sprinkles and icing on your fingers plus a little bit of embarrassment.
I wasn't expecting what The Dark Imp were offering with Doughnut Dash. As a company who's main aim was to provide family board games to the masses, I was expecting something short and sweet and simple? The attraction to me was a chance to play something else with the family in these unusual times in lockdown. I wasn't expecting have a game that graced the table that had more depth than I expected. 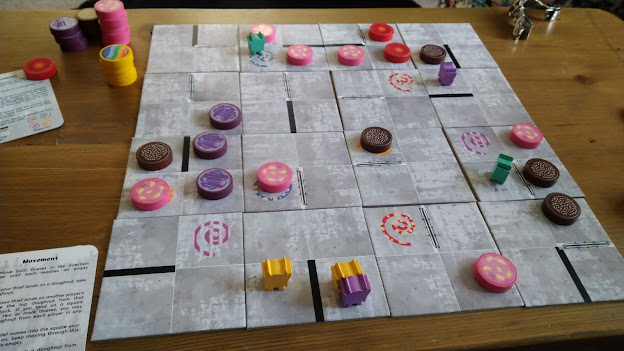 The aim of Doughnut Dash as a thief, is to steal as many doughnuts as possible from Holesome Indoughstries. (I don't even need to apologise for the pun as I didn't write it, that was down to the designer  Ellie Dix, however, everything else is unfortunately mine.) You achieve patisserie pilfering by moving your thief around a board of tiles, selecting a singular direction in which to travel in during your turn stopping on a non empty space. Each round you'll play one of your direction cards from the four main points of the compass, effectively removing that choice until all the cards have been played from your hand, or you use one of the Sugar Rush cards. 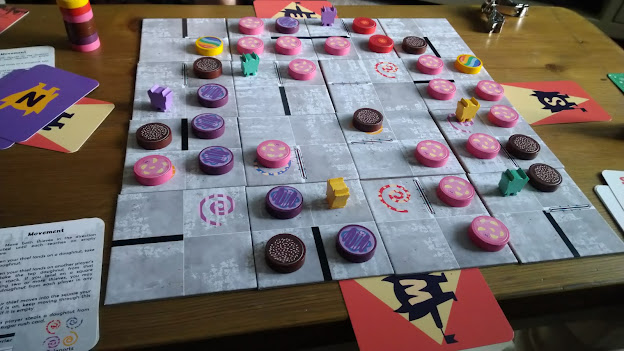 Doughnut Dash at it's heart is essentially a programming game, as the direction you decide is the only direction your thief will travel in unless it manages to hit one of the doughnuts, or a solid wall or another thief, where you get to steal the top doughnut from their collected stack. So at the beginning when there are doughnuts aplenty, the amount of spaces that your thief will move will be short and snappy, as you are very likely to hit a stop very quickly. As time goes on and the doughnuts disappear, then you might find them moving more and having to plan further. The clever bit here is that you have two thieves to play with, so you are always trying to pick the direction that hopefully is the best for both your pieces. It's a small stroke of genius as far as I'm concerned, as no matter what you select, you'll end up having to compensate for one of your thieves. You'll never be 100% happy with your decision and I really like that sense of compromise. 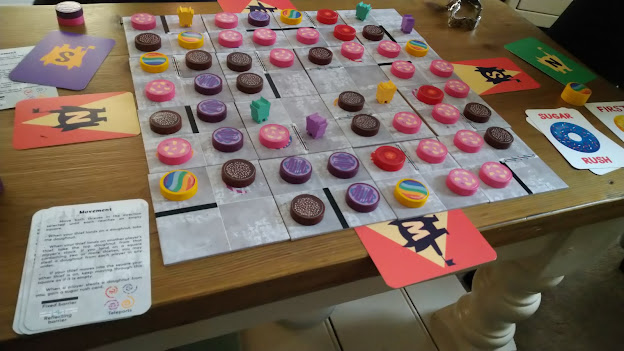 The doughnuts you collect will give you different awards as well. Collecting a strawberry lemonade doughnut gains you a sugar rush card, collecting a blueberry violet doughnut means you need to give a sugar rush card to an opponent with the fewest doughtnuts. That sounds terrible until you realise that those doughtnuts net you the biggest number of points, so sometimes it can be a worthwhile sacrifice in order to help you top the leader board. Ketchup doughnuts get you negative points, and rainbow doughnuts do the same until you have three in you possession, and then they really start to stack up.
The sugar rush cards add an additional layer of strategy to the game as they will allow you to negate the inflexible directions you have selected, or remove the top doughnut from another player's stack, or switch a tile or completely change direction. The sugar cards are a mixture of simple commands through to much more complicated ones, and so younger players might want to leave them out until they get used to the main game, but they add much needed additional depth and so should be introduced as quickly as possible. When the last ketchup doughnut is left on the table or one of the player's stacks reaches the required height, then the end of the game is reached, and the player who has amassed the largest number of points is the winner. 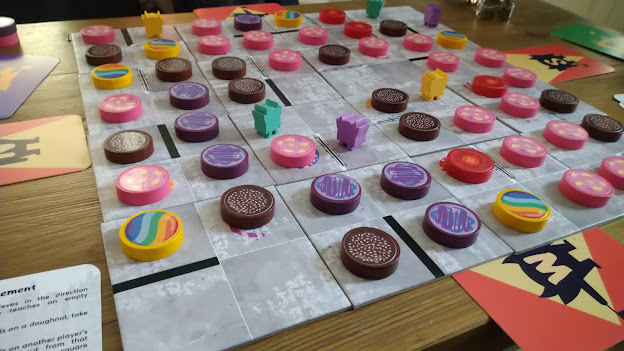 I like Doughnut Dash. I like Doughnut Dash a lot. I like how the game teaches directions and spacial awareness, I like how it forces the player to not always make sub optimal decisions and learn how to compensate for those decisions. I like the hurt and rescue mechanics for some of the doughnuts and I like how it tries to make sure that players never gain too much of an upper hand. I like the fact it teaches tactics and planning without making it feel you are being taught. Doughnut Dash really surprised me, and if you are looking for something that will bring a lot more than most games designed for family play, then you should definitely consider adding this to your collection.
We were provided a review copy of Doughnut Dash from The Dark Imp.
We were not paid for this review
You can check out the range of games The Dark Imp offer at their website
If you would like to support more written pieces on the blog then please consider backing us on Patreon. www.patreon.com/werenotwizards
Doughnut Dash Ellie Dix The Dark Imp