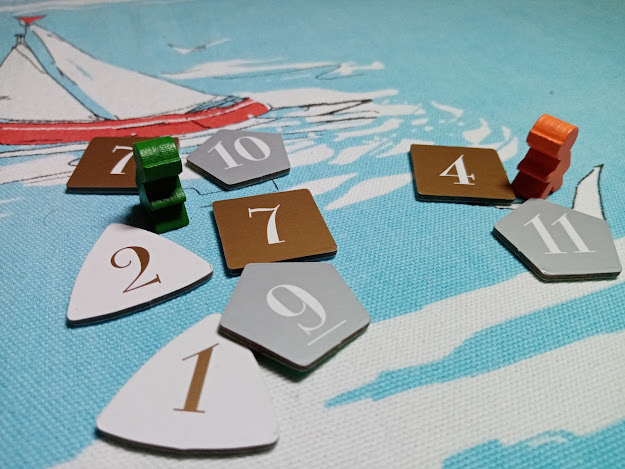 Deep Sea Adventure is a fantastically smart push your luck pocket game. Now, to begin with, I have a real bugbear with “pocket” games, because it’s all too often used to denote a game which is simply smaller than 30cm square. However Deep Sea Adventure is a pocket game, just so long as you have a decent sized pocket. It also has Oink games’ distinctive and slick graphics and design (you can normally spot an Oink game from fifty paces), along with their pared back components and efficient game mechanics. 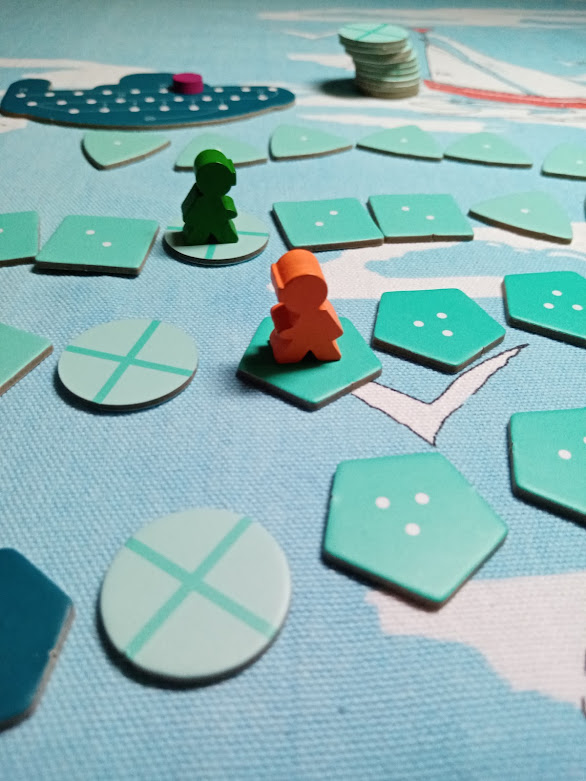 Players take the part of a submariner on a treasure hunt. Setting up, there is a submarine board which marks the amount of shared oxygen and Ruin chips which are shuffled then placed in numerical level order, lowest to highest. On the reverse side of the Ruin chip is its treasure value, and its these that players are attempting to gain. Players take a submariner shaped meeple and begin in the submarine, rolling a dice and moving down the Ruin chips. They can pick up the chip they are standing on, however, your shared oxygen decreases only once you begin to pick up Ruin chips and decrease by the number you are holding. Carrying chips also slows you down as you deduct the number of chips you hold from your dice roll. To mitigate this, you can choose to drop your Ruin chips and make a run for it. If the oxygen runs out before you return to the submarine you lose all of your chips and drown. If you make it back in time you count your loot. This occurs over three rounds, the winner being the one with the most treasure at the end. 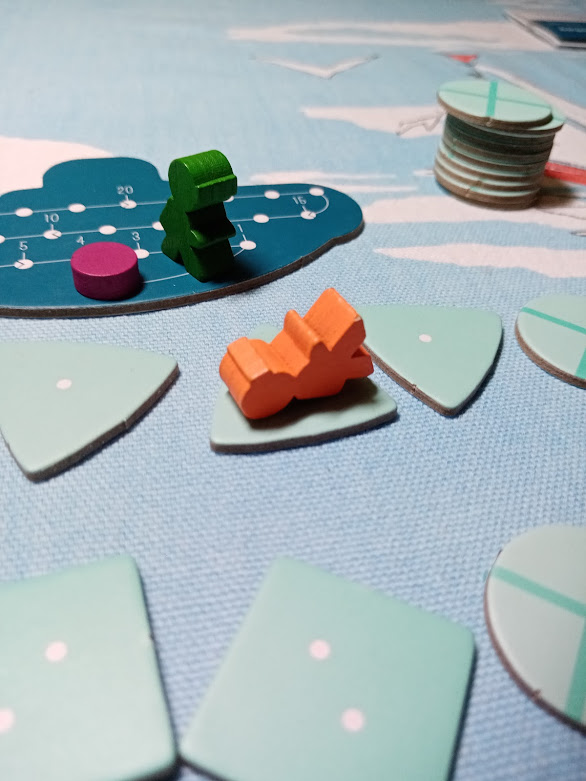 I happen to love push your luck games so this is one of my favourites, I’m also the daughter of a submariner so there’s an added frisson of family fun to this one. There’s a lot of enjoyment to be had yelling at my dad that he’s doomed the whole crew to drowning because he wanted to dive for extra treasure. The shared oxygen is probably the smartest part of this game, as players calculate if its best to start grabbing treasure close to the submarine, so as to make a quick return if needed, or risk diving deeply and not being able to get back. We have a friend who is terrible with push your luck as he is both the pushiest and least lucky. He will grab lots of treasure and drown us all (including himself) for no real reason. Which does mean that for me Deep Sea Adventure has a surprisingly large number of tactical elements as I will change the way I play depending on who I play with. There can be a certain amount of faking and mind games you use on your opponents too.

So, if you have little space to spare, or an empty pocket, there’s really no reason not to own this fun, stylish little game. Just try not to be too greedy or you might end up sleeping with the fishes.


We were not paid for this review

You can check out the other games Oink makes by going to https://oinkgames.com/en/