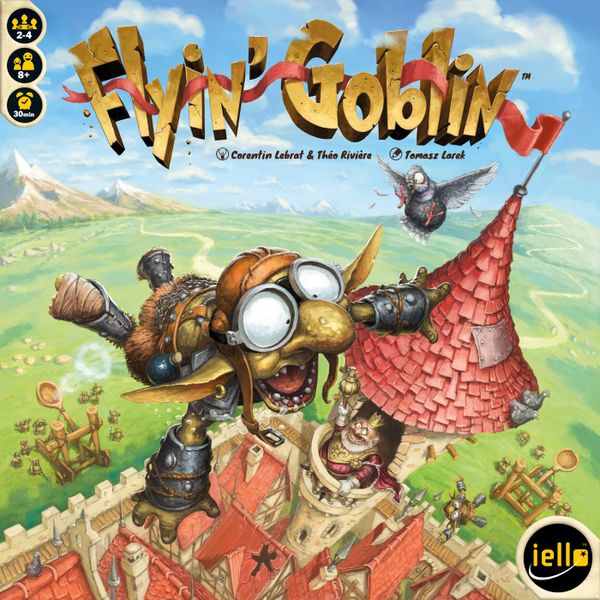 When is a box not a box?
When it's a component, and then at that point, its only a part time box. Or maybe its a part time component all along, waiting in the shadows to spring a boxy surprise on you when you are not looking. Either way, its one of my favourite things to see in a game when the norm is to have boxes unused and very much, far too big for the purpose they were meant to be used for. 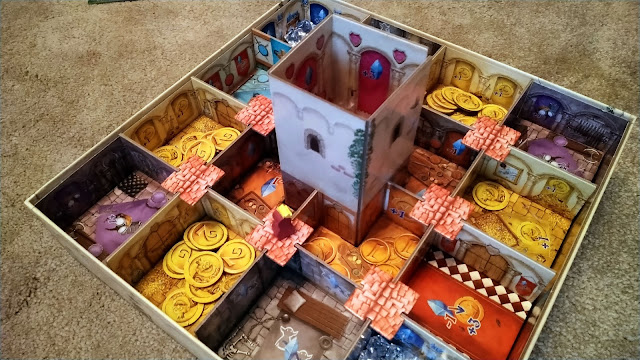 In the case of Flyin' Goblin, the box plays the role (very convincingly) of being the castle of the King, with various rooms to plunder, or utilise as you play this projectile based dexterity game from IELLO. Gameplay itself is extremely simple, needing you to fire your wooden goblin grunt into various rooms in the castle in order to score winning diamonds or much needed coins, put a goblin in the wrong place and you can lose them all together, while those with a steady aim might find themselves knocking their opponents from strategy roofs to gin advantage and send them packing.

You're aiming to either collect enough diamonds to claim victory or build yourself a totem tower in order to claim yourself the champion, and either can be achieved with a little accuracy and luck.
As you play, you'll collect coins that will allow you to recruit additional goblins to your army and increase your spoils in every round. Goblin thieves will hang round on roofs and give you diamonds while the more senior and larger Goblin sergeants will allow you to score a room twice. 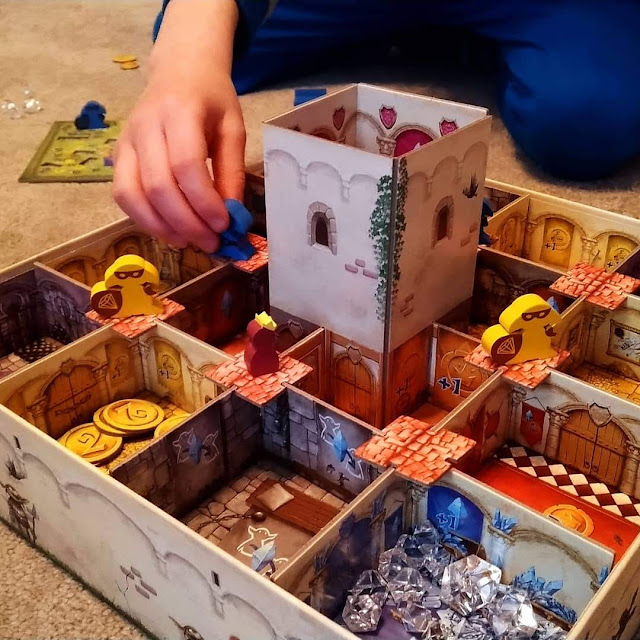 Let's stop and admire the components, because they definitely deserve a mention here. You're graced
with a thickness and a chunkiness what if someone presented you with these made out of chocolate then you would be a very happy bunny. A thick wooden seesaw serves as your catapult, while the goblin meeples are solid and colourful. The small and large diamonds glitter delightfully, and even the cardboard coins are a decent thickness. This is a game designed for roughness and small hands that won't necessarily be careful when they are handling them. Flyin' Goblin is very aware it's tactile and it's good to see that IELLO haven't spared the horses when it comes to quality. It's also surprisingly quick to set up and take down considering the number of pieces, but you might want to store the separate goblin colours in the own little baggies in order to facilitate this.

As the game goes on and you launch your Goblins into the castle, some will miss and need to be left until the next round, while others will do devastating damage to your opponents plans and intentions. Round advantages change quickly as you're never 100% certain who is going to hit sweet spot, or the diamond spot, and even those who have quickly amassed an army, will only be able to launch so many based on the smallest army in the game, which is a neat mechanic to spot runaway winners at the beginning. 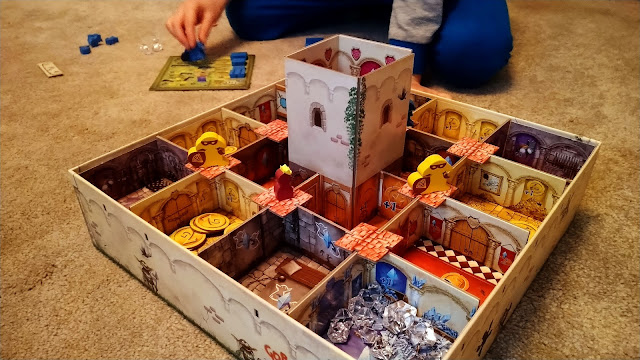 Flyin' Goblin has not been designed with depth of play in mind, the rules barely take up eight pages, in fact, you can be up and running extremely quickly within a matter of minutes. It certainly plays better with more than two players, but only because it adds to the frenetic nature of game, and the shout and screams of fun as people land and fail or land and squish. There's a certain purity to just placing you Goblin on the seesaw and letting it fly. You kind of end up not caring if you don't hit the target. In fact, some of the funnier moment will happen due to mishaps over skill shots. Though that in mind, there really is nothing cooler that knocking a thief from a roof and denying them their diamonds in the loot round.

Those who dislike dexterity games might want to steer clear of lack of immediate depth in the game, but they would be missing out on some no brain fun. It's definitely a great little title for those with younger players especially if you are looking for a game that isn't here to take itself to seriously. If you're after something that looks great on the table, won't break the bank, and should be easy for non gamers to jump in and start launching Goblins, then it's certainly worth checking out.

We were provided a copy of Flyin' Goblin from Coiledspring Games. You can visit their website here
This review was not paid for
Neither IELLO or Coiledspring have appeared on the podcast.

If you would like to support more written pieces on the blog then please consider backing us on Patreon. www.patreon.com/werenotwizards
Coiledspring Games Dexterity Games Flyin' Goblin IELLO