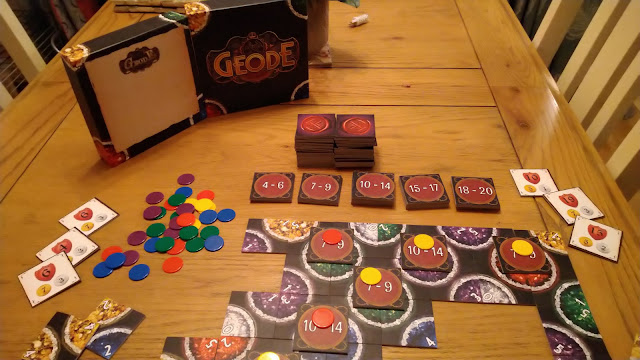 Of course, choice is something that is closely controlled. In many cases, you're faced with the illusion of choice, governed by external forces, whether that be self imposed or pushed on you by another party, or even the Brownian motion of society itself. You could make the choice of walking out of your job, pouring your water bottle into the middle of the floor and marching out, head held high, sneering at anyone who cares to look at your performance. Though you are more likely to spend the evenings instead scowling and checking recruitment sites, because walking out isn't viable, because of bills and references and what's actually acceptable, and when it comes down to it, it's simply not a choice that is on the table.

Choice can be fun when you limit the choices, and it manifests itself in the form of triumph as previous choices line up and lead to victory, or as analysis paralysis, when a simple choice is not an easy choice to make. Geode from District 31 is all about limited choice, and all about making a decision between whether you play one tile or another out of your choice of two, and then where you place your tile in the mosaic of stunning looking Geode tiles. The aim of the game is to join four tiles together of the same colour, creating a full circular Geode, and then collecting a scoring tile that may of may not pay you a generous reward. There's a lot of hidden information in a game of Geode as you'll keep your tiles hidden from other players at all times so they can't see what you can potentially play, and you'll not even know the contents of your scoring tile until the end of the game. What you can see is the numbers that are displayed on the each of the tiles themselves and you need to bear that in mind as you place tiles on the 8 x 8 playing area in order to try to maximise your score. Higher sums of geode values will mean the chance to claim higher renumeration awards and hopefully victory. 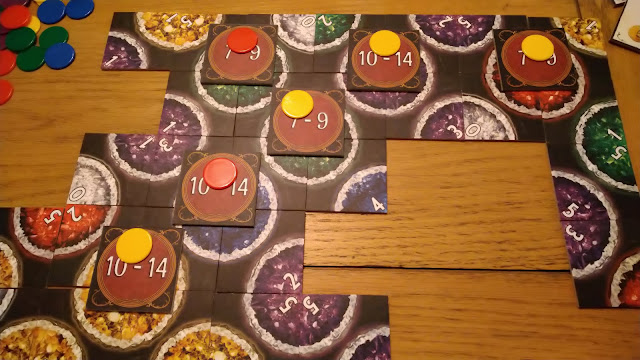 Playing Geode is simplicity itself. Learning how to be good at Geode is where things can become both interesting and slightly frustrating. It's an extremely lean game. There are no additional powers or special effects you can play, which I can imagine would have been a huge temptation for the designer. I'm kind of happy that all you are relying on are your choices of where you play your tiles, and that someone is not able to swoop in and snatch joy away from you with something you can't counteract. It means that anyone can come in from the cold and start playing really quickly, and it's not entirely impossible for a new player to be victorious in their first couple of games. This is because there is a lot of luck in Geode, as tile choice is random from a pile of two stacks, and you never know what you will have until you pull it from the pile. It can also lead to frustration if the tiles you pull aren't falling in your favour, as a limit of two tiles per player can mean you feel like you're acting and reacting for the now, instead of an overarching longer term strategy. I would have preferred to have a larger choice of tiles to pick from, maybe even a high as five in a hand, as I think it would really start to play into longer term planning and minimise the sense of frustration when things aren't going entirely to plan. 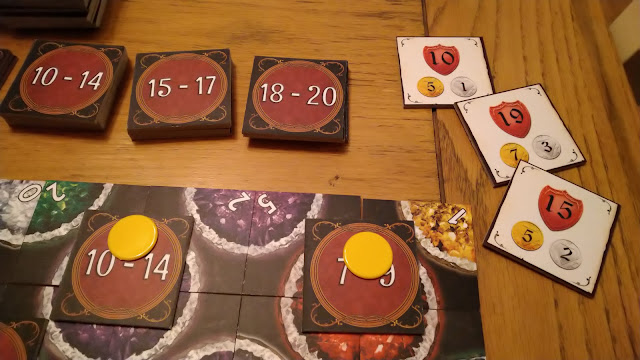 I do like the scoring, which is based around the smaller contract tiles. On one side contains the range of Geode points it refers to, while on the other side has a specific number. If your Geode total is the same as the number, then you score the gold number of points, if it isn't then you score the silver, lower number. It means that even when you feel there might be a clear winner, then fate can maybe play a tricky hand, allowing someone to snatch defeat from the jaws of victory. It's clever and I don't recall seeing it anywhere else. 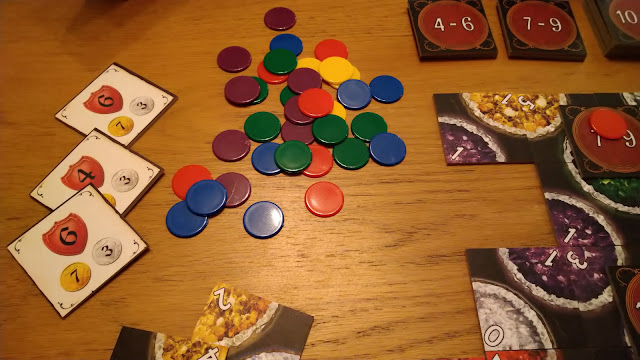 I think in all honesty that it works with a larger number of players, as it leads to some glorious control battles, teaming up opportunities and the chance for occasional moments of brilliance as you watch someone play that tile and complete two Geodes at the same time, while you stare scowling, with the same tile idea in your hand. 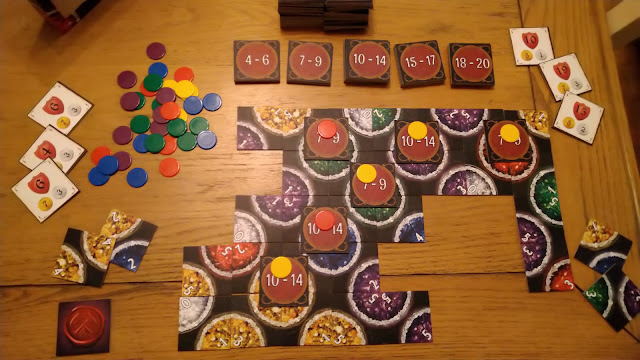 There is a lot to like about Geode, with a couple of minor niggles thrown in for good measure, but what District 31 have before they launch the Kickstarter is the chance and the choice to tweak here and there on a very solidly produced game. You choice is whether to go ahead and back, and to be honest it's not a bad choice to consider adding to your collection. However, they did call me a wizard, so f**k them..

We were provided a preview copy of the game from District 31
We were not paid for this preview
You can find out more about Geode and their other games on http://www.district31.co.uk/