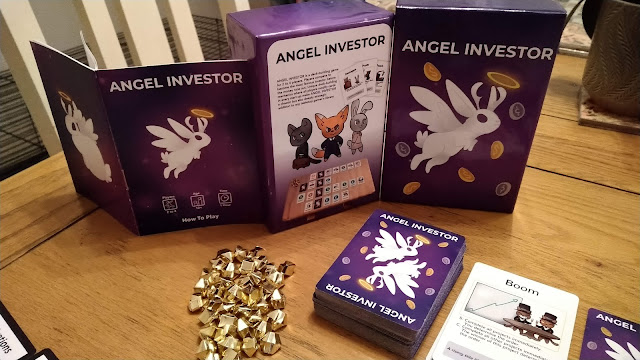 Angel Investor is a card game about running successful start ups using your own money and skill cards, completing projects and aiming to build up as much fame as you can before the deck of cards runs out. Published by Inductive Bias and designed by Alrecenk, it combines a mixture of business intelligence and information with cute cartoon like graphics to bring a combination of luck and strategy to the table. Players aim to play as many of their money cards into a project row in order to have the most money invested in the project to win fame. On the completion of a project all the skills cards within that row will be activated and awarded to the player who has invested the most money within that row. Some of the completed cards will award you with that much required fame. Others will reward you with the ability to swap out cards or draw more cards, effect other players and generally give you an advantage the more your play. 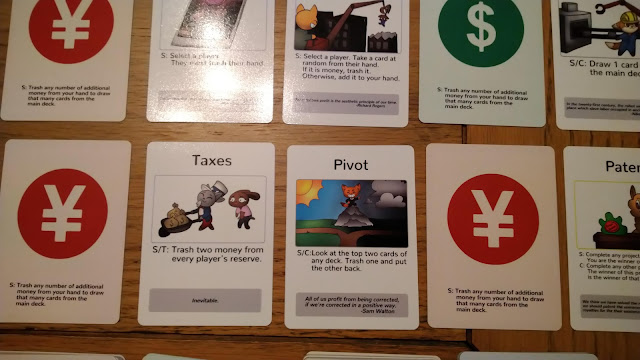 That's dry isn't it. I mean, I had to take a sip of coffee while I was writing this because it hit me like I had one of those bags of silicone desiccant on my tongue, that my mouth said, "look, we're done here, take sip pleeeeeaaaase." Yeah. Those ones. The ones that are usually printed with 'DO NOT EAT YOU MUPPET', and in fairness, I've always been tempted to just bite on that sucker and see if I just turn into a pillar of gritty sand and dust. So I could swept up, put in a jiffy bag and posted to someone in the US, with the simply instructions to 'scatter me in Gen Con.' That would do. Trampled into the conference hall carpets by several thousand lightly perspiring board gamers. It would be an emotional experience. Unlike that paragraph above which I could have copied and pasted from the plain text rulebook. Forgive me, I'm just trying to be clever. Unlike Angel Investor. 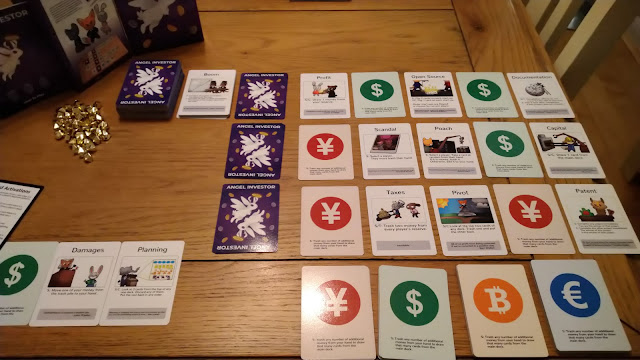 Angel Investor is clever, in that cards themselves often have more than one use, and often have different points in the game where they can be played and will activate differently depending on when they are played. So some cards can be spent from your hand to gain an effect, or invested and played into a row. Some will activate when they are flipped from the draw pile into play while others will only activate when you complete a project. I'm a bit of a fan of a multi-use card, I love the execution when it was used in Wildlands and Skulk Hollow, and so I admire the inclusion of something similar here, as it takes a lot of balancing to get it right and not break the game. This coupled in with the fact that you are concentrating on more than one project at a time, you might find yourself taking more time over a turn than your expected. Sometimes there are options for multiple actions on card which means you'll sometimes hold back on playing just on the off chance you can play it at another point and benefit further. 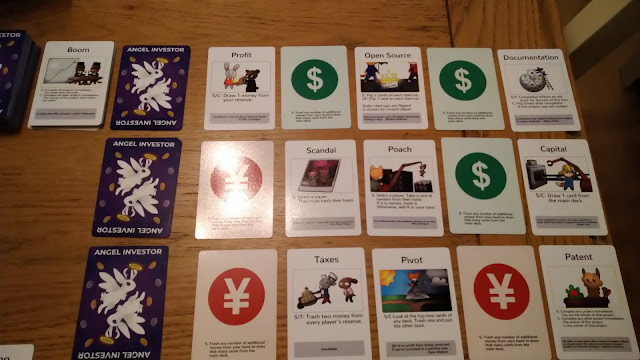 The art is fun and serviceable, the graphical design on the cards varies from okay to fairly crowded and mundane. I kind of expected more from the rather wonderful cover and box art, but what I get instead is something that really should have looked in a mirror before it decided to turn up for dinner. I'm not entirely sold on the presentation at all. I would have liked to see some bold colours to represent the five actions on the cards just to perk things up a bit. Just to make it wear some fancy dress shoes, seeing as we're going to that fancy restaurant that you like, and yes, white shirts are smart, but did you need to settle for the grey tie? Presentation is so important in such a crowded market and AI could have done with maybe some more time, or more honest feedback. 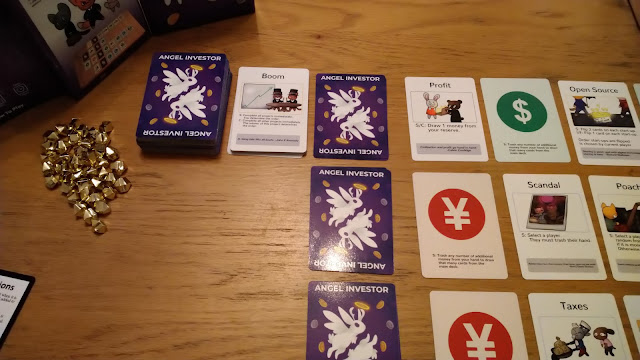 I have other niggles about the tiny size of the starting deck that automatically forces you to start drawing from the main deck straight away, instead of starting with a larger deck size per project that you add your investment money to. I doesn't make sense to me, seeing as you exhaust that deck so quickly in smaller player games. Also for a game that talks about gaining the most fame to win, not many of the cards seem to award you with fame. It seems to be something few and far between. It makes me wonder if the scoring would have worked better where larger completed projects scored more points, mostly so you could use more of these lovely gold pieces, but also it would give people the choice to set a win limit. However, these are niggles, not game breakers. Observations, not condemnations and your mileage may vary. 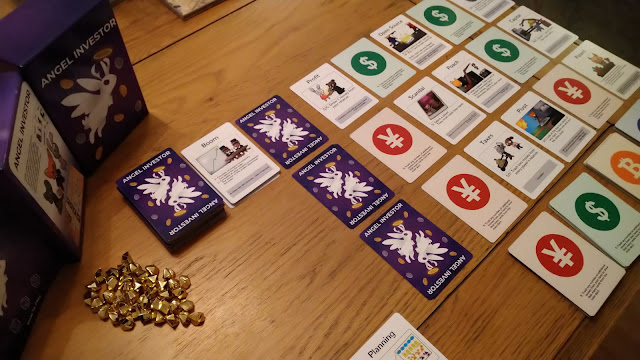 The main question hanging over Angel Investor is whether or not there is enough fun there to keep people interested and entertained. It's a relatively dry game that seems to have taken itself a bit too seriously, but then tried to lighten the moods with the cutesy art. Strangely, the fun question is going to rely on the crowd of people that you play with. I'm not convinced that the game by itself is entirely fun in itself. The designer claims the game has been play-tested using Artificial Intelligence in order to ensure that there are multiple ways in which to play and every game is different without breaking. I wonder if a few more play tests with some groups might have been beneficial in order to hit those high take that moments where you get to smirk over ruining someone's plans to complete a project. 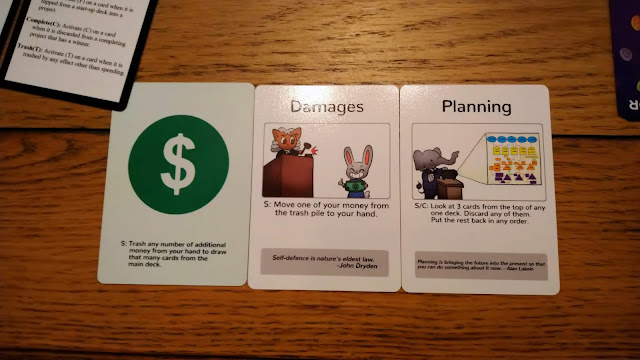 Angel Investor's biggest dilemma how to get itself out there in front of people. It's there and ready to be bought today and you can pick it up through the GameCrafter if you like the sounds of what you've seen. The reason we are reviewing the game is because of a comment the developer made on Twitter about how no one was interested in the looking at his game. Further conversations with them highlighted how some people wanted money to write a review or ignored his review requests completely. It's one of the first lessons you learn about enticing investors to your venture. You need to create buzz in order to create interest and need. Angel Investor isn't bad in any respect. It's challenging and interesting but does need a few tweaks to really elevate. But what it needs at the moment is if you are interested in it, is to consider purchasing, but more importantly, consider telling other people that it even exists, before it disappears like a forgotten investment opportunity.