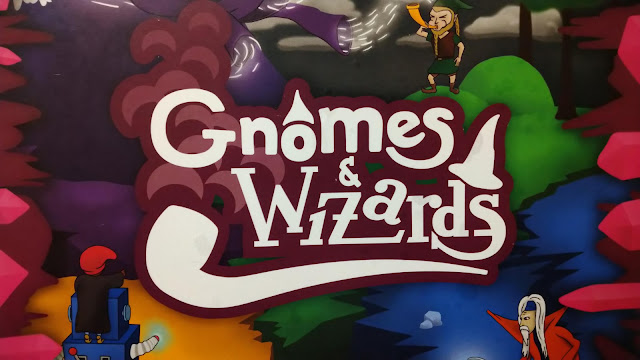 Gnomes & Wizards is a funny beast. A skirmish game where tribes of fools and idiots in pointy hats face off against each other with asymmetrical powers, fighting for shares of power crystals and trying to wipe out each other's tribes over ten rounds in order to score as many points as possible.
It's a game about adding on to basic traits and movement using dice rolls and skill cards. It's a game about flipping over the triangular tiles in order to create a sense of urgency.
It's very much a game about gathering crystals and charging up your team in the hope of gaining the upper hand when you face each other across the battlefield. 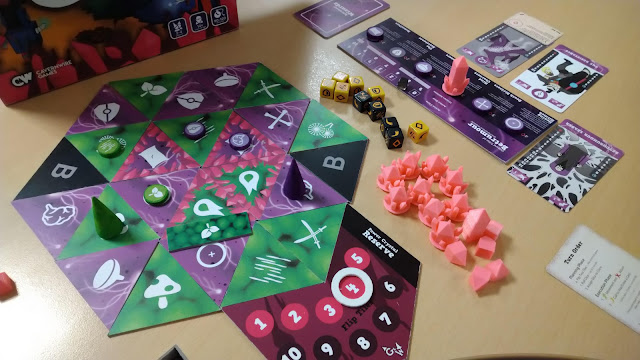 At the beginning you'll start off with your leader, and them alone, as you roll dice to help you move about the modular triangular board. Your dice decide your actions and in many ways enhance them, and will also allow you to summon in additional clans that will bring their own special skills that you can take advantage of. Combat itself is relatively straightforward, working on a simple defence / attack maths calculation, but unlike some skirmish games, a successful defence still only deflects half of the damage received, so you are minimising the pain instead of mitigating it. It prompts a reason to attack even if you feel that you don't have the backing of a strong dice roll, as you will always be chipping away at your opponents life force. 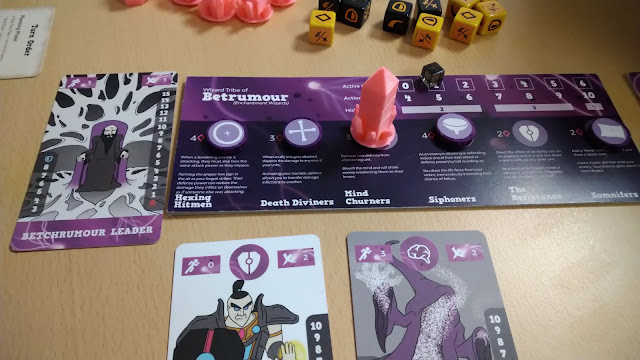 Even if you don't roll three horns to allow you to call in an ally, you can instead elect to choose a skill card instead, which will either allow you to charge up a skill to let lose when you have enough crystals, or play it as a one off hidden ability that can often get you out of a sticky situation. It's one of the clever touches that I appreciated, that your never feel completely stuck if the dice rolls don't go your way, which is important in a game that is not designed to overstay its welcome.

As the rounds continue, the play arena itself will shrink in size as tiles are flipped to their blank side, which prevents you from stopping on them, but more importantly no longer allows you to summon the clan that the symbol on the tile relates to. It leads to delicious moments of panic in the late game as opponents realise they can no longer summon their favourite clan to help them out, and it forces more battles as pieces are pushed together. Again, Gnomes & Wizards isn't here to spend an afternoon on you table, but designed to be snappy, quick and violent. 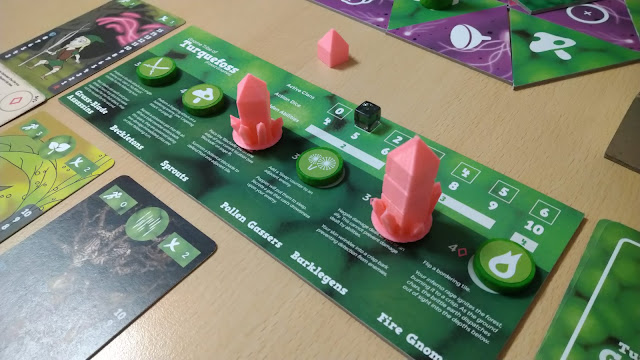 So it's fun, and more chaotic the more players your have, as you increase the play arena accordingly, and you have the chance to mess around with the board layout as you get more experience.
There's issues here as well though, it's not all magic and garden ornaments. As with anything that rolls with the dice, you can be stuck feeling under powered if you have a catastrophic sense of rolls, even with the chance of re-rolls. There are less chances of it happening of course, but it still can happen. 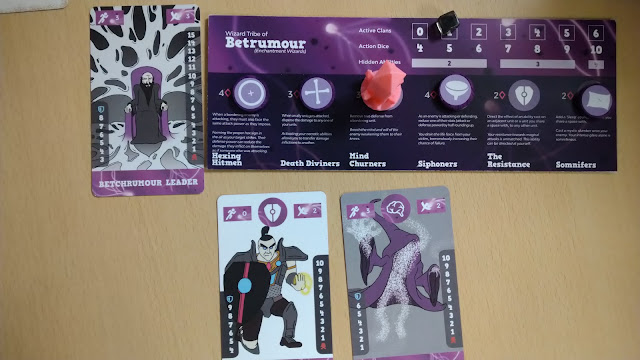 I've issues with the rule book and how it explains the game. The layout is confusing, and while actions are well explained, there isn't an obvious set up diagram, component anatomy or description of the cards. It lead me to being confused about the crystal reserve, or how the tiles started off when they were laid out plus a few other rules. The set up for the board is at the end of the rules instead of the beginning, and it made me wonder if this had been blind play tested, or if the designer was sitting three feet away, ready to explain or interrupt play when something wasn't done right.  I know, I'm being picky, but when you're putting this out in front of prospective backers, the smallest confusion can lead to doubt, and that in turn can lead to a game not being backed. I'm sure its something that can and will be remedied during and post campaign when the game funds, so while its a noted concern, I still managed to play the game, I didn't need to contact the designer, but it's still a valid concern. 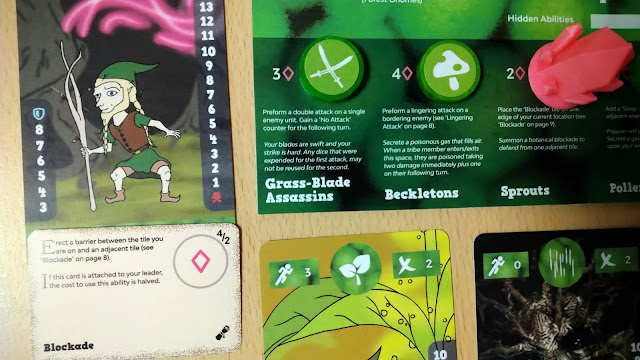 I'll be honest. I just don't like the art. Well, I don't like 30% of the art. I really love all the graphic design elements of the component boards, the tiles and the pieces, are all just so very very right. I'm getting hints of Vast from Leder Games here, I really like how clean the lines and colours are. I really like the symbols of the clans and how the player boards look. It is clean and abstract and I'm totally here for it. I like how the leaders are simple coloured cones, and the clans are disks. It just works for me. The components here are some of the best I've seen for a prototype Kickstarter. The card art and the rest of the cartoon art? It's not good, and in some ways it really detracts from the table presence. It's like the designer had everything thought out and finalised for the main game and then had a total crisis of confidence in the product and decided clean and abstract was not going to work, and it was time for quirky. Go look at the Kickstarter video and see how pleasing to the eye the game looks in the first thirty seconds as it zooms around the board. It looks pretty awesome.
I feel bad even saying it, because I know how expensive decent art can be to be commissioned, but in this case, I want less art instead of more. 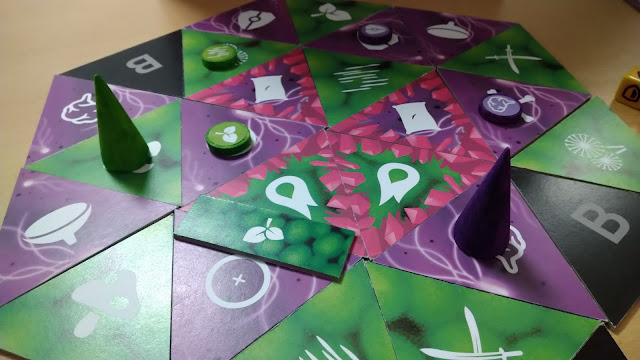 Gnomes & Wizards is a decent, fun, skirmish game that has a huge amount of potential to really grab a lot of peoples attention. It's fun and frantic and only needs a couple of changes to make it shine.
I hope the Gnomes win.

We were provided a preview copy of Gnomes & Wizards in which we made a contribution to the shipping of the game.
We were not paid for this preview.
Cavern Wire at time of this article have not appeared on the podcast, but may appear on a future episode.
You can visit their site - http://cavernwire.com/
The Kickstarter Preview Page is https://www.kickstarter.com/projects/1902249182/648597010?ref=23mdqx&token=9e06bc46