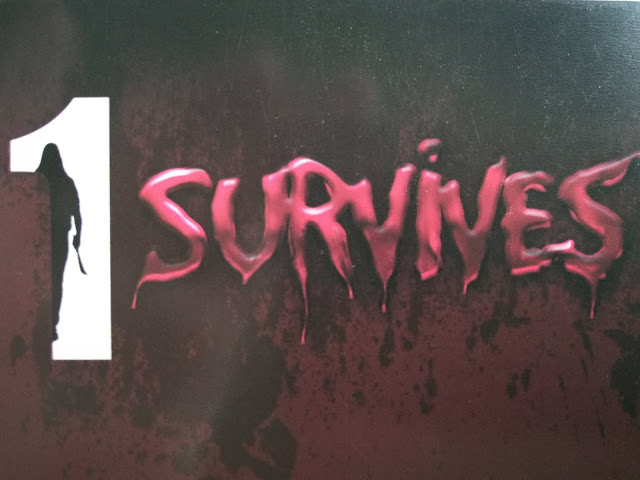 See that shadowy silhouette appearing through the giant 1? They want to bash your brains in then disappear back into the jungle, leaving you and your backpack a bloody smear on the ground. At least I assume that's what they want, so I'm going to send them somewhere else and leg it.

The premise of 1 Survives is that your High School boat trip has gone awry and the group are stranded on a seemingly deserted island. Unluckily for everyone involved, the island is in fact inhabited by a serial killer who'd moved there in a last ditch effort to stop killing. The stranded party have triggered the blood lust and the urge to kill is back. Can you be the one that survives?

1 Survives is a small footprint card game for 2-6 players. Each player takes a role within the stranded party (Cheerleader, Jock etc.) and a location card indicating your starting location on the island. Each player is dealt a hand of 7 cards and from these cards you have to survive the killer and your back-stabbing friends that will not think twice before using you to chump block the guy Talking Heads sang about. 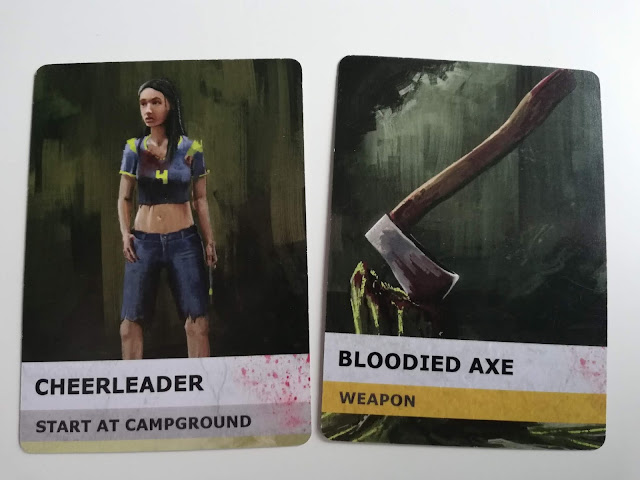 On every turn a player must draw a card and discard a card. Drawing can be from the face down deck or the top card of the face up discard pile (with an exception for special cards). The hand will be made from: 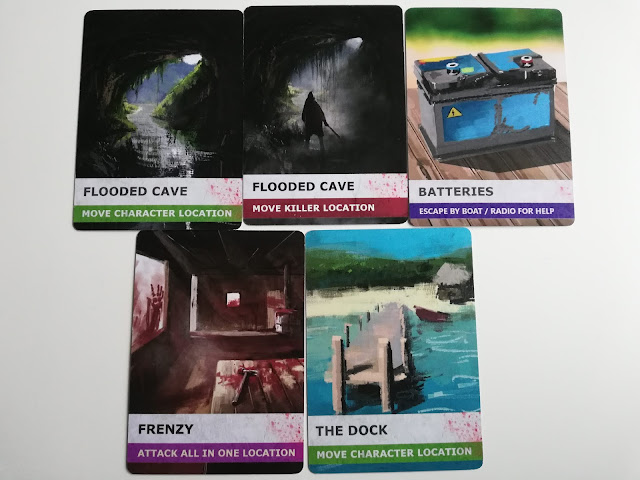 This is a clever game. There's a lot of ways to completely screw your opponents and have them brutally killed and if you have a good group playing with you it can be really good fun to back stab each other. You can sit on that red card that moves the killer for an opportune moment and play it when there are multiple people at a location. You might be trying to collect the items required to fix the boat, then get yourself to the dock and escape the island, but you run the risk of others trying to do the same and wasting time searching for the items you need. Escaping is one of the win conditions, with the others being slightly bloodier - being the last person standing and killing the killer being the other two. Again, easier said than done on this dog-eat-dog island. 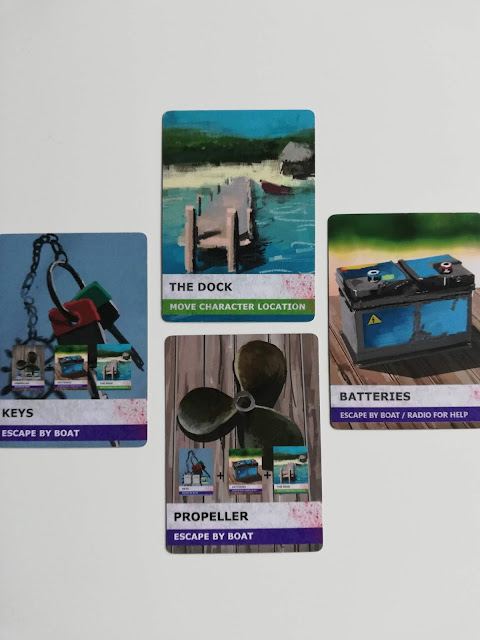 I had a lot of fun with 1 Survives. Each game saw the banter flow, with the default setting of most people being to gleefully send the killer to another players location and watch them die to much hilarity. Funny until the next player to take a turn does the same thing to them. The art on the cards is really nice and whilst not final, the examples shown looked great, down to the blood splatter effect on each of them. The game is quite short and flows along nicely. Its an easy game to learn
but most importantly, everyone that played with me had a good time and that's what its all about in the end.

Big thanks to Ross Glover and Stevie Allen from Tip the Table Games who provided the copy of the prototype to have a look at and also for their time demoing the game at Tabletop Scotland (read all about it here). At the time of writing the aim is for the game to hit Kickstarter at the start of October, with the campaign ending on Halloween. The guys were guests with Richard on the show recently and you can find the episode over at Podbean.

We were provided a prototype of the game, which we have returned to the designers. This may not be the final product and should not be considered a review.