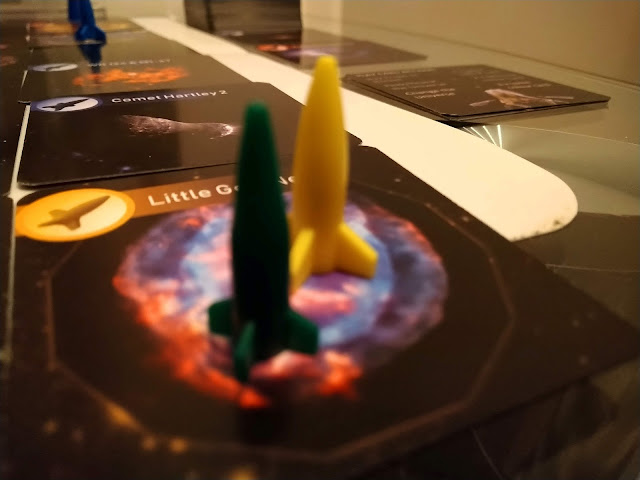 I used to own a small book of constellations when I was a younger trainee, because alignment with the stars and planets often helped with power of magic and spells. One of my old lecturers would speak of using the inner mind to connect fully with power of the universe. Most of us however knew that the only power that old fool possessed was the amount of dried dragon breath that was swilling round in their veins. It was one of the many things that drove me from magic and into the path I occupy now. I've always had a funny relationship with learning and being taught since that time, preferring to find things out myself, instead of relying on the wisdom of others without understanding the topic in hand, hence the book on constellations.  The stars, and the planets that surround them are a fascinating playground with no age restrictions on the the audience, and while sci-fi fiction would add on numerous threats to make space interesting, usually space is interesting enough without the addition of anything as crass as a flying saucer.

Empty Space Explorers doesn't contain anything vulgar like a xenomorph or a threat of destruction, there are no guilds or alliances for you to form or consider being a part of. You don't trade or truck around the galaxy but you are trying to find a friendly exoplanet with your probe which allows you to suit up and send up a rocket to land on the new planet to win the game. Up to four players can play at any one time, picking up and using various coloured cards to either Research or Explore the galaxy.
In space, it turns out that the universe is a selection of cards face down on the board in either a grid of 28 cards or some agreed pattern between the players. It opens up the possibilities of replaying ESE in future if you so desire, as long as the four exoplanet cards are there at the end to greet you.

Researching allows you to pick up a couple of cards and then play up to four cards in order to have an effect on the immediate universe. You might want to scout ahead and reveal a card you haven't seen yet in the area or find out and keep the knowledge to yourself. You might want to change the universe completely by swapping out a card for another one in your hand. You might want to be a cult classic early eighties film and play a black hole and stop any one from landing on the space.. in space.. right..(I'll get my space suit) 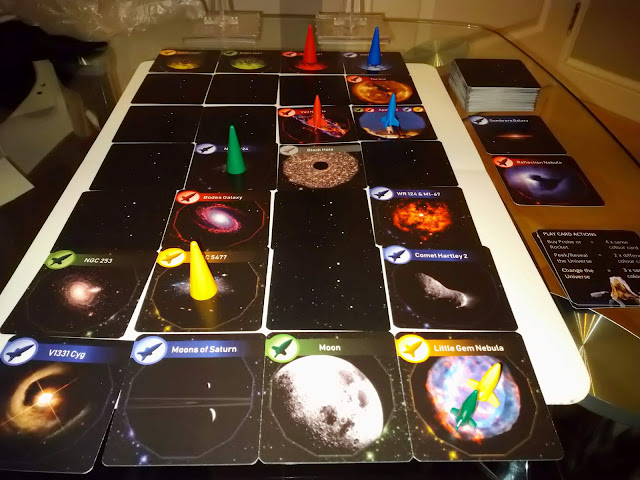 Or you can move your probe, and later on the space ship, but only if the space you are landing on matches the colour of your probe or ship you are piloting, or if you have a card that you can play that matches the colout then your piece can move onto the space. If you land on a black hole then it is game over and you need to start again, back at the bottom of the grid, ready to play again.

So a mixture of researching and exploring is vital if you want to progress, and bringing in the 'take that' tactics is also an option if you fancy making it a bit more Star Trek than just plain Trek. To be truthful, Empty Space Explorers isn't hugely fun unless the other players start to misbehave and make things difficult for the you, otherwise you are looking at a fairly pedestrian affair, which is based on who gets the right cards at the right time and the right colour at the right time. 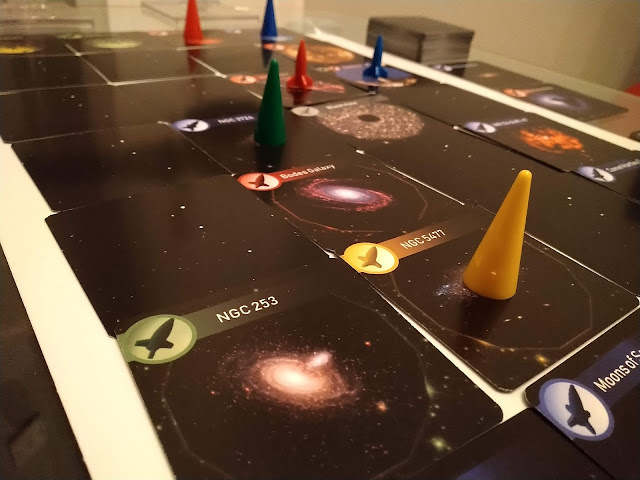 The thing is, when the exoplanet/space theme becomes the thing in the background, then ESE kind of shows it's true colours, it kind of works better as trying to stop other explorers as a priority over getting to the exoplanet. It then becomes a reason to swap galaxies or place black holes in peoples way. It really works when you change the board into a race track shape, and completely embrace that idea fully, with all the back stabbing that involves. That takes up more cards, but ultimately adds a bit more fun. Surprisingly though, the fun of the race is never really fleshed out in the rule book.

I'm frustrated with Empty Space Explorers because of that. The rules could do with a bit more oomph and rocket fuel to create some excitement. EXPLORING SPACE IS EXCITING.  The components are a bit uninspired, which I get because this is a preview. The cards are the worst offenders, being full of space and planets and galaxies, there's not much information on them apart from the name.
No flavour text, no explanations and therefore no inspiration for someone to wants to find out more about the wonderful array of heavenly bodies on the stepping stones to the goal. Yes, there will be an option on the deluxe version of the game that gives you an illustrated book with descriptions in it, but at the same time I kind of need a reason to care and I'm not given it. It's a missed opportunity here because you could easily swap the planets out with pictures of different types of biscuits and you wouldn't really see a difference in the game. Only because they are nothing more than just a picture, and because of the mechanics of the game,  I'm only interested in the colour of the card, as that is what I am interacting with. So you end up only caring for the top corner, and not being fussed about anything else on there.

The ideal age range for ESE are the very type of age who would drink up this information and it's really strange we don't get a hint of it in the game. I wanted to take what Empty Space Explorers brought to the table and tinker and add little bits. Like when Kevin Bacon was in Apollo 13 and they built an entire thing to save the ship from rubber bands, a hat box and ear wax. 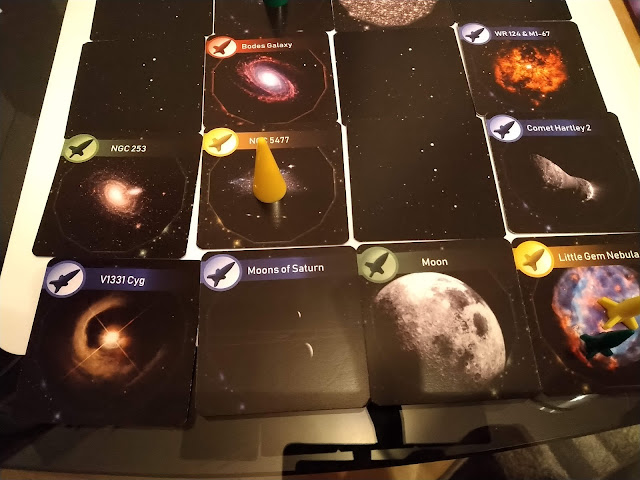 See, Empty Space Explorers is ok, it isn't bad, it's not a terrible game, or a waste of time. Try not to take what is written above as me telling you to steer away, because it has the tools there to bring out the fun, to have people shouting with glee and making space noises. It has all this potential to be better but you wont find it in the rule book, which is missing the passion, missing the mission, missing a reason why it should get to the table over something like Go Nuts for Donuts..

I'm hoping ESE spend a bit more time in Mission Control than wondering about the launch into Kickstarter space. There's definitely something here that my kids are going to love but I really needed to see a few tweaks to elevate it a bit more. Otherwise, where this game might be in my collection, there's probably going to just be an empty space.


-We were provided a free demo preview copy of the game to assess.
-We were not paid for this preview.
-The designer of the game has not appeared on the podcast.