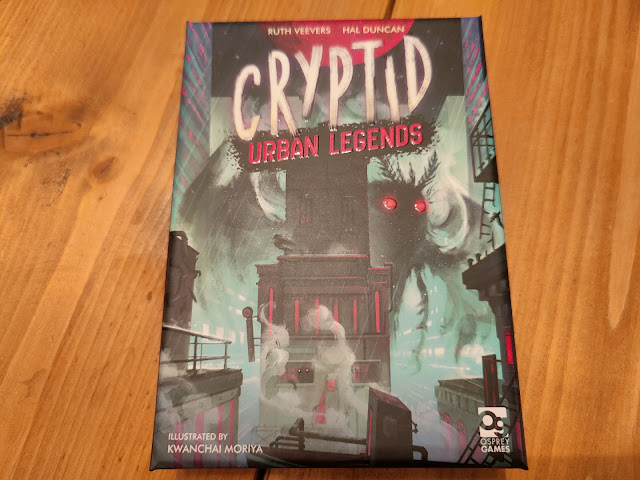 I didn't play the previous Cryptid game, though I heard stories that it was a challenging enjoyable game that looked like the bum end of Mothman, scary and interesting but ultimately not the nicest thing to look at. Fast forward to this year and we have Cryptid: Urban Legends, a two player competitive puzzle game designed by Ruth Veevers and Hal Duncan and dripping with simply stunning artwork from Kwanchai Moriya, an artist who illustrated my wonderful darling Catacombs and continues to age like a fine wine in terms of the talent and art they are bringing to the table. 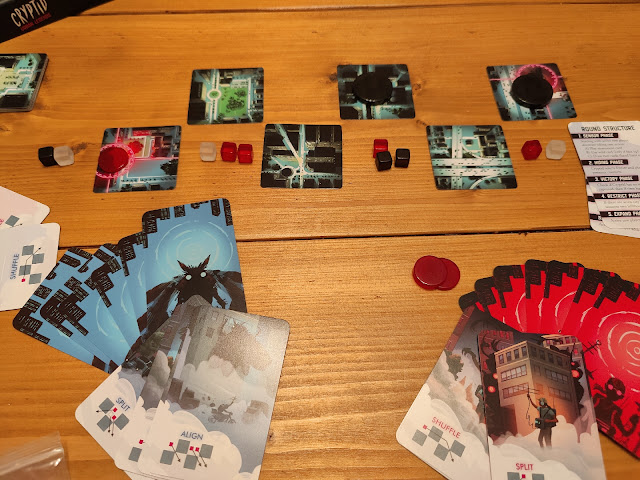 Cryptid Urban Legends gives the impression it is a hidden movement game where one of you plays the mythical legendary cryptid and the other plays a would be scientist, aiming to track down and prove the beasts' very existence. In reality, it plays out more like a tactical movement puzzle, where one of you is trying to place presence tokens with the aim is to end up with two of your presence tokens at each end of the sprawling city metropolis, while the other is trying to reduce the chances of them playing these tokens in the first place. 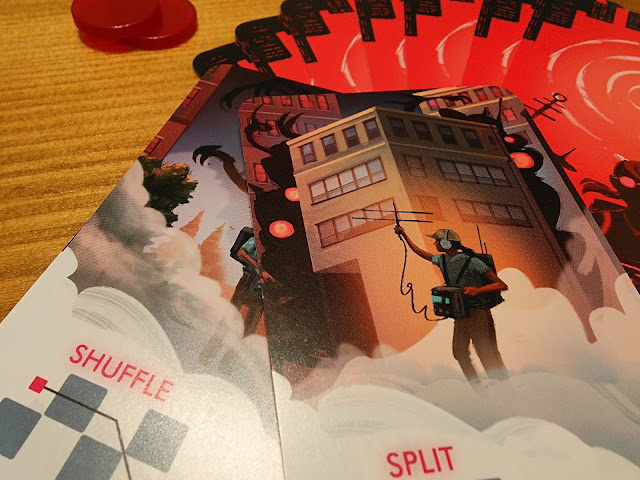 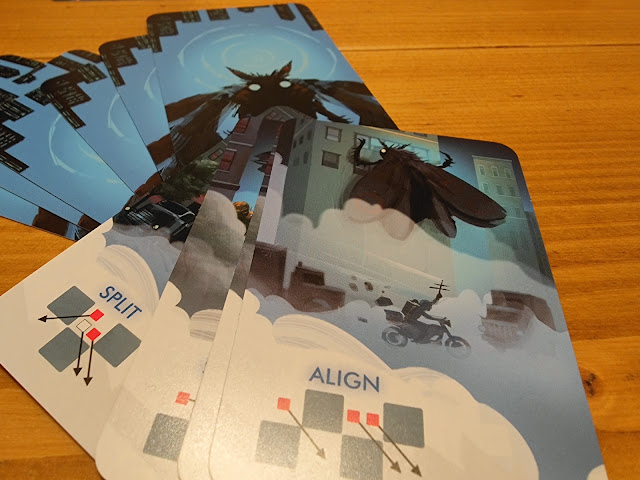 If it sounds complicated then yeah,  it kind of is more complicated than you expected it to be, especially since it requires you to plan ahead in your moves. With the layout of the sensors changing on an almost minute by minute basis in the main sensor phase, the Cryptid is often trying to do the best with the layout it is left with, and with moves limited to only three different kind of options then sometimes the game can be up quite quickly, though there are wild cards that can be played if either player really struggles. 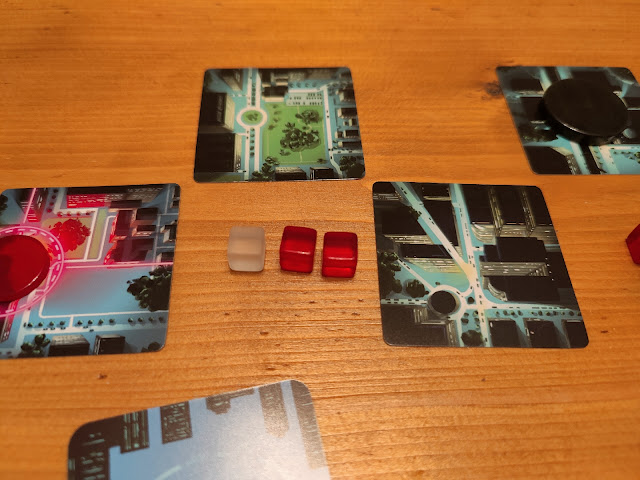 Cryptid Urban Legends is often a game that flies along on the seat of its pants with the potential lead switching several times during the course of the game, and it provides a tension that results in some very tight games. At the same time doesn't enter into a long term stalemate. When the last of the city tiles are placed, the game ends and is decided on the number of evidence tokens collected, an additional mechanic that brought in specifically to deal with potential ties. It works quite well, though it can sometimes feel unfair and that your are snatching defeat from the jaws of victory. 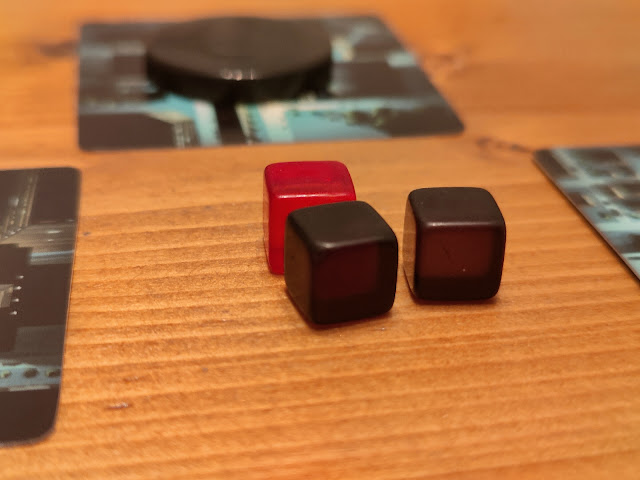 The scientist always acts as the disrupter in the game, trying to derail the best laid plans of the Cryptid and because of that it can occasionally feel like the Cryptid is on a bit of an uphill struggle as you are trying to organise your sensors in order to maximise your presence placement, while the scientist is quite simply there to make a mess. It does make those eeked out victories that little bit sweeter when they do happen. I would have liked to have seen some powers specific to both the scientist and the Cryptid, as there isn't really anything to differentiate between the two, apart from their end goals. 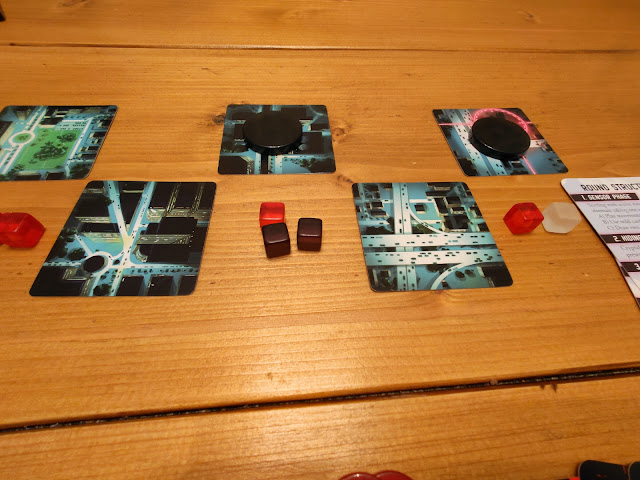 I've flipped back and forward with the theme but only because at some points it seems like it has been tacked on just to give add another Cryptid game to the series. I feel that the hidden movement theme doesn't really match the actual mechanics of the game, and that this could have looked like a much simpler abstract game without losing too much in the overall gameplay. That being said, not having a theme would probably dry this out like an overcooked macaroni cheese because you would just end up with a strategy game and nothing else. Who is seriously going to pass up on the wonderful artwork from Kwanchai? 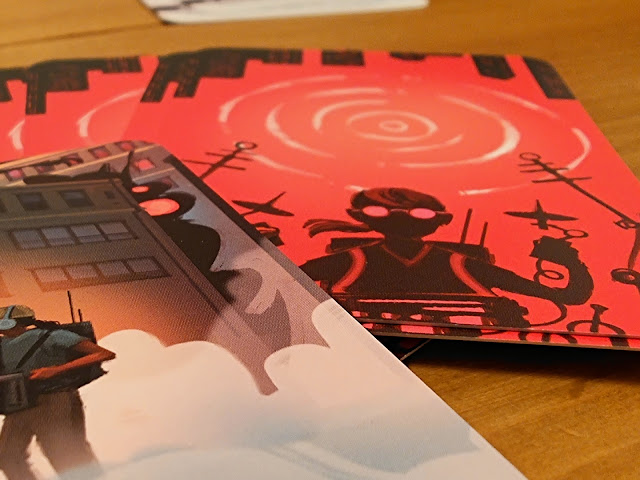 For me, I'm not sure if it's a keeper. It's good at what it does, simple to set up and play and also relatively easy to learn. It can be a bit of a brain burner for those needing a challenge for their mind, but also at the same time, you can just spend an evening just playing back and forward, taking turns to be hunter and hunted. I'm on the fence here with this one. There's not enough to make me rave but not enough to make me grave.

You can find out more about Cryptid Urban Legends by visiting https://ospreypublishing.com/cryptid-urban-legends