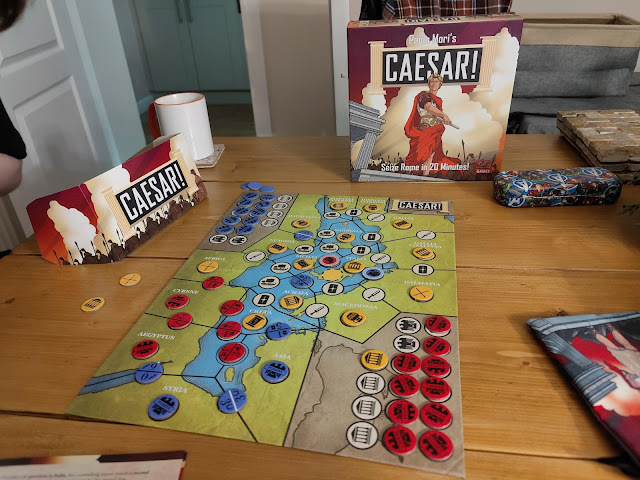 If you're going to come at me with your same size box as Blitzkrieg with the same type of exclamation mark as Blitzkrieg and then spout about doing something in 20 minutes then you better be damn sure those promises are made of solid brass. Those are bold claims considering how much I like Paolo Mori's previous 20 minutes of joy in a box. In fact, I've not only wrote about it once, I went back and added in some extra glitter when PSC release the special big box addition. So you better just not be someone else pretending to be Paolo Mori otherwise I'm going to have to punch you. I'm not joking here. If you're David Turczi in some kind of horrible face mask disguise then I'm going to be upset. 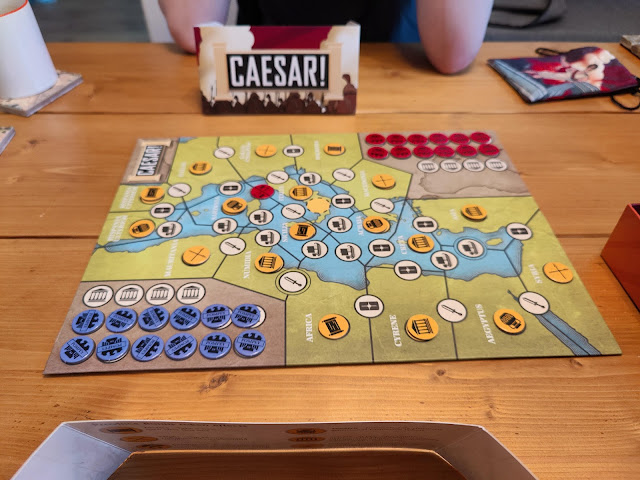 I adored Blitzkrieg! because its simple concept and execution meant that it could be actually played in twenty minutes, and due to the randomness of 'the bag', it meant that no two real games were the same. It was incredibly moreish, like some kind of board game tapas except without it being as terrible as tapas actually is. You felt full and satisfied but if someone offered you another slice, you'd be greedily offering up your plate. If you haven't played it then I'm feeling joint pity and offence for and with you. Go and spend some of that Christmas money you have, or take something back that you have a receipt for and treat yourself. You deserve it, you slice of delight you. 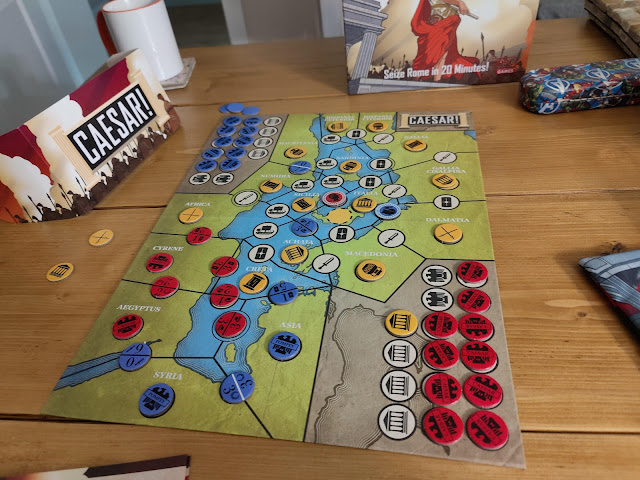 Caesar! is not Blitzkrieg! Yeah, there's the bag and oh my, they've really kept the standard here. You can lay the bags side by side and close your eyes and you'll struggle to tell the difference. But the tokens are now influence tokens and control tokens and there's no longer a track that you're moving cubes up and down in order to win the theatre of war and therefore the game. There's a decent sized board to unfold here and just like the previous game, graphical design has been kept down to the minimum. The map isn't here to wow you with an overhead view of the Roman Empire but to give you an idea of where the scene will be playing out. The land is dissected with lines to represent borders and circle mark out where bonus tokens live. Icons represent what kind of influence token can be placed similar to Blitzkrieg, but representing shields and swords and even Roman war boats.

The easiest way to describe Caesar! is like a game of squares. That join the dots game played with you by grandparents on rainy days when there was nothing on the council telly and you 'were bored'. Each territory has a number of sides with spaces for influence tokens. Once the spaces are filled up then the player whose influence is the highest wins the area and places a control token in that space. Importantly, the player who closed the province takes the bonus as a reward. The bonus tokens will give you an extra turn, or an extra choice of influence token or even the ability to flip over one of your opponents existing tokens. If you're connecting two territories then you get to place another control token between them. The person that gets rid of their control tokens the quickest wins the game. So you can be placing the token that closes the province but sometimes lose the province. It's a rarity to be perfectly honest but it can happen due to the scarcity of choice.

Once again just like Blitzkrieg, you can only play influence tokens that are free from The Bag, and it changes Caesar from a planning into the future game into a dealing with the hand life just dealt you game. This forces sub optimal play at certain points and even the bonus tokens won't save you from a crappy tile selection. What I really like is that influence tokens values straddling two areas at once, and higher value tokens more often than not will be sharing space with a 1 or 0, which means winning a province might result in you losing the neighbouring province. Get lucky though and just like Squares, you might trigger a cascade of small victories where you are shedding control tokens like glitter and winning yourself the game. Caesar has that mastered the delight of the swinging winner, where one move can change the tide of province ownership and therefore the game. Especially if you win the senate for an area and that allows you at end game to potentially shed four control tokens at once.

With an increase in additional mechanics comes the potential increase in learning time and the associated complications. One of the wonderful things about Blitzkrieg was it was extremely simply to pick up and play, almost to the point of it almost being guessable. Caesar stumbled a bit when it comes to rules explanations over the important Senate bonus. I must have read that sentence about fifteen times between the two of us and it just didn't click but left us shaking our heads. Of course once you get it,  its all plain sailing, but it did leave us staring at each other across the table try to figure out what we were meant to be doing. It's a small complaint in a pile of wonder, but it certainly detracted us from jumping in and playing, especially since both of us were such big fans of Blitzkrieg. On the other side, you've got solo modes and additional bonus tokens you can bring in as well as slight changes to the main game modes themselves. There's a lot here to keep you busy over an evening if you want it to.

Caesar! is going to fall into that pile of games that will become a staple of the collection for me. Something I'll stick in a bag when I'm going somewhere at some point in 2025 when I eventually leave the house and meet real people again who aren't just immediate family. It's either going to be the appetiser at the start of the night, or the cool down at the end of an evening, but be very wary that you might just end up playing five of six games of it back to back, because just like its sibling, I kind of like it.

You can find out more about Caesar! by going to https://www.pscgames.co.uk/games/caesar