This review and first impressions piece is based on the final retail version of the game provided to us by the designer and publisher. We were not paid for this review. We give a general overview of the gameplay and so not all of the mechanical aspects of the game may be mentioned. 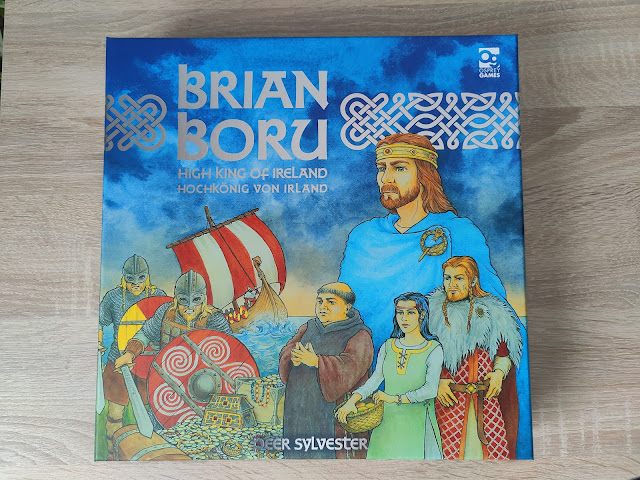 Peer Sylvester wants to mess with your competitive head at the very base level when it comes to his latest game, Brian Boru, published by Osprey Games. Based around the adventures of Brian Boru, High King of Ireland, who in the beginning of the year 1000 used both his might on the field and in the political landscape to unite the various regions under his control and dominance. You take up the task of trying to gain favour with the church, control towns, repel Vikings and even use marriage to unite everyone under your banner and win the game. Providing you have gained more points than anyone else.

On first impressions you have what appears to be the traditional multi-track Euro type set up, with areas for the Marriage track, Church and Viking parts of the game. There is the huge points track that circles the entire board, waiting for one of your cute wooden disks to take a wander around as you collect the spoils of your progress. Everything looks in an acceptable Euro style order and then someone starts dealing out the cards and telling you that you're about to play a trick taking game and on this round you're going to be trying to play the highest number you can in the blue Church suit. Yes, please stare in bewilderment about how this could possibly work, but please close your mouth as we are not a cod fish.. 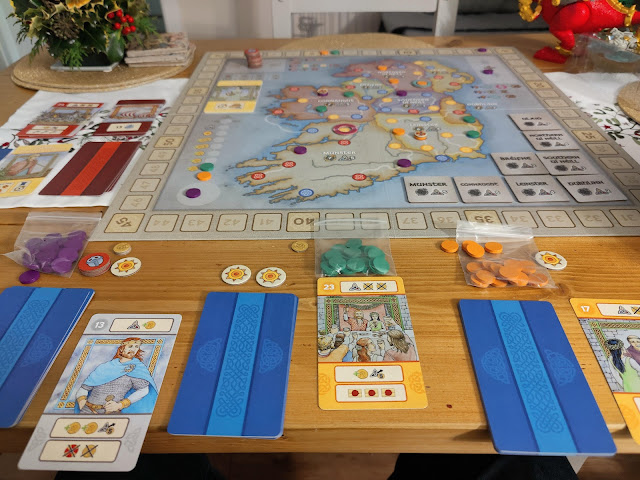 One of the biggest issues with trick taking games is the tendency for there to be a famine or feast type situation. It can be very difficult to have a measured approach and consistently win the trick. Sometimes you are all too often pipped to the post when everyone is playing their high cards and find yourself left with the mediocrity of middle value cards and you end up in some kind of numbers no mans land. Most trick taking games rely on special cards that can be played to alter the game in your favour and sit outside the normal run of numbers. In Brian Boru, winning the trick will normally gift you with the primary action on your card, and usually winning the claim to own the current active town. Everyone else who lost is rewarded with the secondary action.  Now secondary actions are where you can start to make a change to the Viking, Marriage and Church areas on the game. If you have enough coins, you can also take control of a town connected to another town you already own, which becomes increasingly more important as the game progresses. 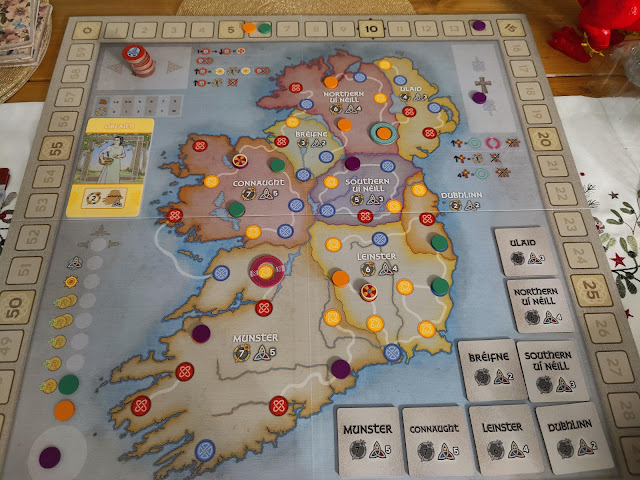 This additional secondary action reward is a wonderful mechanic because like many other Euro games, you always want to be working towards something in your overall game plan. There's nothing worse in these type of games than playing a round where you feel that you pretty much did and achieved nothing and now you have to wait for your turn again before you can see if you can make an impact. This while watching your opponent across the table rack up another ten points because they managed to get in just before you. In Brian Boru, climbing the marriage track or taking out a Viking horde or adding more patrons to the church area will all play dividends as the game progresses and continues through the rounds. As you continue to play the trick cards and either win or lose through luck or design, your collateral in these various areas will grow until you play your second last trick card and then the upkeep phase happens. 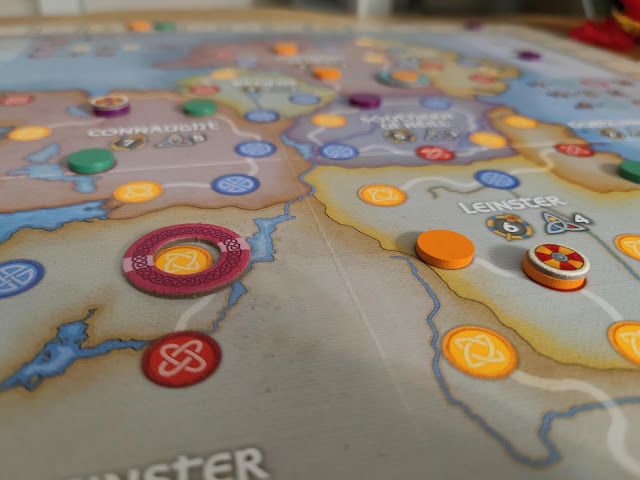 Brian Boru builds up like a crescendo as the game plays through, with the winners being stripped of their advantages for playing well, and the losers still gaining something but given the potential to win in the next upkeep phase. Win the marriage track and you'll gain the current marriage cards which might offer you points, or even a town of your choice instead. Claim enough Viking warriors and you'll possibly put off the latest raid, or prevent your towns from being over run. You build a monastery if you have the most patrons of the church. However, in every instance, you're stripped of your progress and push down to the bottom of the pile if you're the MVP for that area. It helps to prevent the chance of runaway winners from dominating a track. It means at the beginning of the next trick taking round, it gives everyone a chance to claim that area the next time.  At the same time in the background the number of towns and regions available continue to decrease, which limits the choice of suits you want to compete on and sometimes causes you to compete over an area where you have no interest in winning but need the chance to gain favour in one of the areas instead. 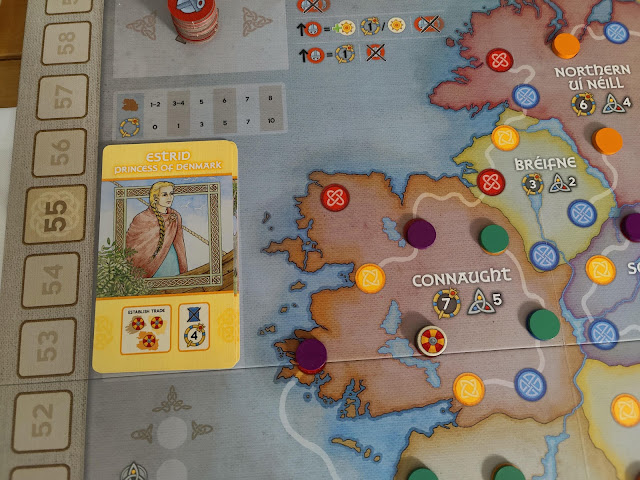 Regions are claimed over time as those with the highest number of loyal towns are rewarded temporarily with a claim token, that sits there as yours until someone else comes along and takes over a town to swing things in their favour, or have a Viking horde invade and knock away your advantage, or build a Monastery in the same region and match your level of control so the claim token goes back to the board waiting to be claimed. This fluidity of gameplay is very attractive to someone like me who is frustrated in other Euro games, where domination of an area is sometime impossible to counter, and I can see that once you have a few plays under your belt, most games will become highly contested and difficult to call an outright winner with ease.

I'd like to make a special mention of the rulebook, that while is annoying that it is the size of the game box and prone for falling off the table while trying to learn the game, is excellent. The explanation of the rules is very well presented, with example play included and includes a hugely handy Quick Reference part on the back page of the book. As the games progress and you become more competent, it's brilliant to not have to leaf through to find out what the card symbols mean. The game is also language dependent, instead relying on clear iconography and straight forward graphic design. Wonderful art by Deirdre De Barra adorns each of the various cards in the deck, superb watercolours and muted shades across the board which gives Brian Boru an almost Tranquil table presence. Also, I keep seeing the names of Filip Hartelius and Anthony Howgego crop up in some of my favourite games of this year and I wanted to give them a special mention and thanks for the work they continue to do in helping to bring high quality titles to the table. 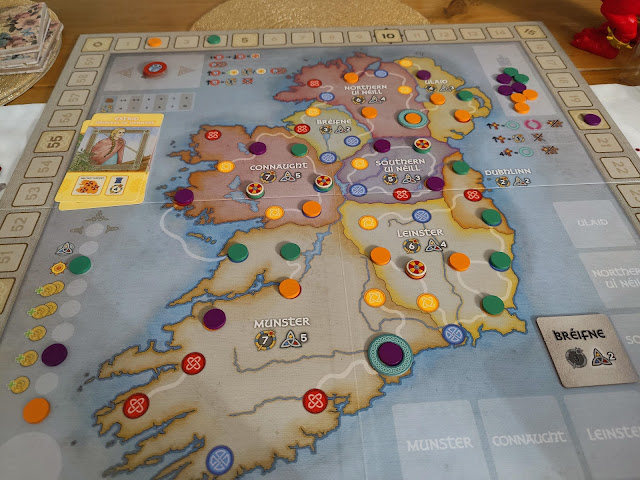 Brian Boru brings an extra dimension to your standard Euro in the form of an innovative trick taking aspect that works in rewarding those who are patient and strategic with their plays. It's relatively straightforward to learn thanks to it's well designed rulebook and copes well with stopping runaway winners. I'm looking forward to seeing how it plays in the long run once I have a full grasp on how to maximise the benefits from both winning and losing the tricks. Until then, I'll be relying on the luck of the Scottish. This is gong to please those who like their euros without the heaviness and the capital E. He's not the Messiah, he's a very enjoyable board game.

You can find out more about Brian Boru by going to https://ospreypublishing.com/brian-boru