on November 28, 2021
We were provided a credit in order to purchase a Pre-printed coloured mini from Hero Forge.

For many, the months of lockdown offered a different way to play. For those who were raiding dungeons or navigating dusk filled night skies it meant moving from gathering round a table with a screen covered DM at the end of the table, to individually gathering online through Zooms and Whizzes and Roll20s ,while still trying to act like there was team work and togetherness and the camaraderie you had come to expect. Avatars moved from being present on the table to being virtual properties moved as if by magic by an unseen hand.
Virtual characters mean bigger possibilities in terms of character design, and with the popularity of Tabletop Simulator allowing role players to take their characters virtually into their adventure world, the opportunities for businesses to offer services in this field has grown dramatically.
One of the main players in the last five years has been in the form of Hero Forge, a Kickstarter darling that jumped onto the scene offering the ability to create your character and have it customer printed and posted to you. As time has progressed, the software and the options have been built on over time, and now along with standard print, you have the option to have your creations sent to you in everything from standard grey to real metal to a virtual form that can be added to your online gaming or an STL file that you can print yourself. And now Hero Forge have introduced the ability to have your mini not only printed, but for those wanting to save themselves the time and trouble, have it produced in full colour as well.
For anyone who has played any kind of RPG videogame in the last ten years, and ventured through the delights of a character creation (which by law dictates you make a completely ridiculous character with all the sliders up as high as they can go before making something sensible) then you're going to feel very much at home in the Hero Forge toolset. Select everything from head size to expression, weapons to clothing and even down to the various accessories your character wields. Choose your floor type and even decorate it with potion bottles or a range of different artefacts. The wonderful thing here is that for me, it was the first time I had been able to fully actualise my Blades in the Dark character that up until now had existed as an amalgamation of Miranda Priestly and Patsy from AbFab. You can then go daft with colouring in your little avatar and this is where things really start to get exciting. If you want, you can have the fully coloured version printed out without you having to pick up a brush.
I'm first to admit I'm not bad at the old art, but the art of miniature painting has always managed to escape me from a mixture of shaky hands and bad eyesight, I'm better to paint your kitchen then paint your chef if you get what I'm saying here. The wait to get it sent is going to be longer that getting your hands on the files, but I'm the type of person who who get the files with the intention of asking a friend to print them out and then have them sit there forever and a day. Surprisingly, even though the coloured minis are printed out on demand and the estimated time was given as a couple of weeks, it actually was a lot quicker than expected and it wasn't long before the tracking email arrived in the inbox for me to wait with anticipation. 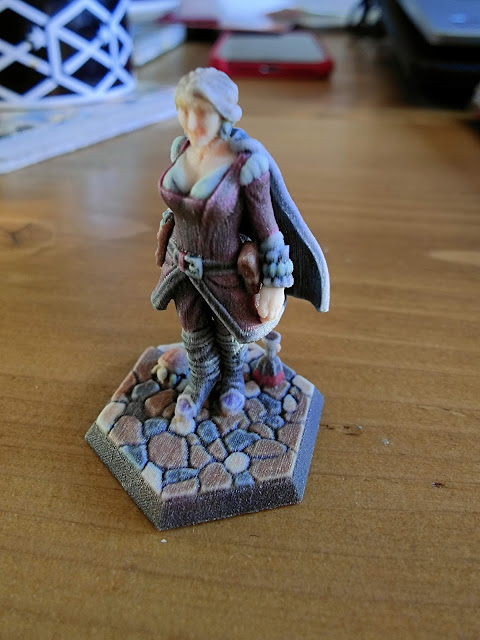 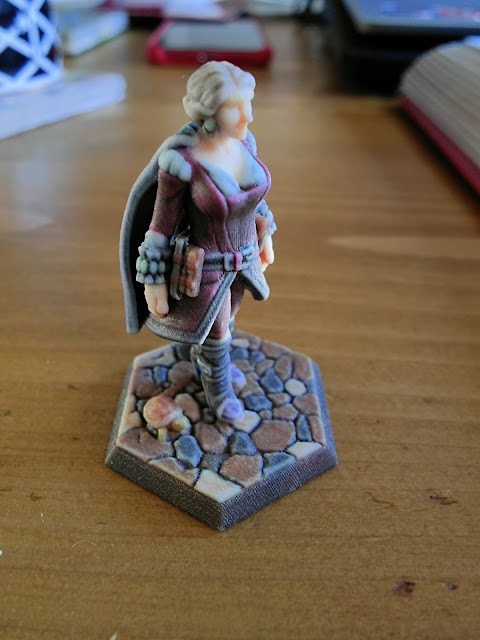 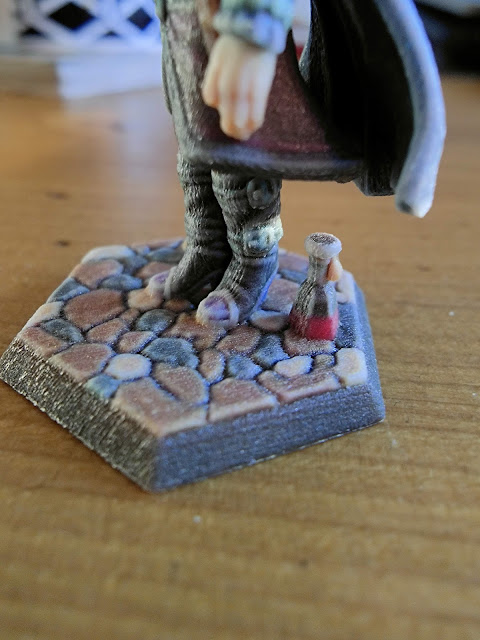 The mini arrives extremely well packaged, double bubble wrapped and in its own poly pocket to keep it safe and secure. There's a surprising emotional connection as you see the figure for the first time, as I had already been playing as Lady Anne for several months at the point when I received the mini. There was this moment where the character fully came to life for the first time as we played the next session of the game, and Lady Anne was there on the table, present and correct. It will continue to join me in future sessions as well, and if we move into another game altogether, I'll probably just try to take her with me into the new game.
So let's talk about the elephant in the room here, you've looked at the close up photographs and no doubt some of you are going to be unimpressed, because compared to the type of thing that you would normally see fully coloured, a la Workshop of the Games, then maybe the definition isn't as sharp as you would like, and the facial features definitely need a dark wash in order to make them visible. I'm not going to disagree with you there. If you're inclined to be a painter then you'll go for either the STL file to print out your own version or you'll be ordering the grey scale figure to give it your own go. There's the heavier price tag to consider too that might make you consider alternatives, but once you weigh up purchasing paints and brushes, then for pure convenience, this makes a of sense.
Hats off to the technology that Hero Forge is running with with for this. Things always improve with age and I can see the quality coming on leaps and bounds in the next couple of years as things are refined. From a personal point of view, I think someone would be absolutely delighted if one of these precoloured minis turned up on their doorstep if they in the middle or at the end of a successful campaign, as it adds that additional tangible memory to your campaign, which is normally about fun times spent with friends. And who doesn't want something like that to put on their shelf of memories?
You can create your own character by visiting https://www.heroforge.com/
If you would like to support more written pieces on the blog then please consider backing us on Patreon. www.patreon.com/werenotwizards
Hero Forge Preprinted Coloured Minis