on October 31, 2021
This review is based on the final retail version of the game provided to us by the designer and publisher. We were not paid for this review. We give a general overview of the gameplay and so not all of the mechanical aspects of the game may be mentioned. 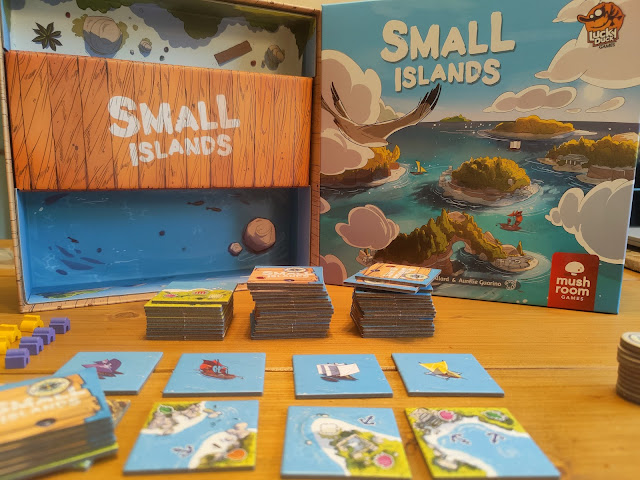 The name Small Islands will come to be a name that is loathed across the the board game world. Not that it does anything wrong. It's not the colourful illustrations by Aurelie Guarino, for they make the game pop on the table. It's not the quality of the components that are like little trinkets sitting on your table. It's the the fact that Alexis Allard wants you to break convention with your gaming habits. Teasing you with the game name and forcing you to go against what one hundred other games want you to do every time. 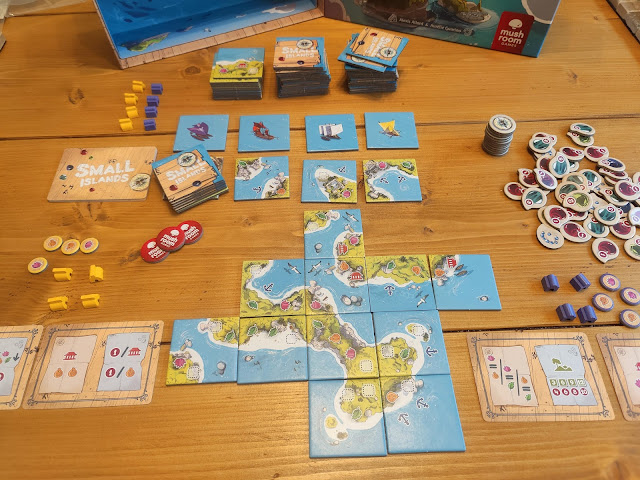 At the beginning it seems business as usual, there are tiles that make up parts of islands, there are super cute little Clan houses that each player will have to place on the created islands as you go, and even smaller and cuter bonus tokens that you can use in order to help you add additional natural resource tokens to the island and help you to score when things become a bit tricky with the tiles that have been played. A pile of tiles form the navigation stack which everyone draws from to build up the islands that are being explored. Objective cards are dealt and kept under lock and key to make sure no one else knows your aims. Once the main six tiles have been laid, you can then decide to land at one of the nearby islands by placing a ship tile, out of a total of four available for the whole game. Or you can continue to explore and lay more tiles in order to increase the number of islands out there. 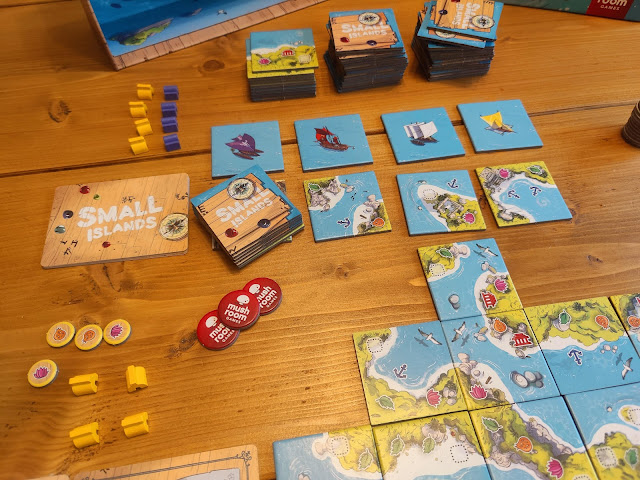 You'll sit there proud as you've managed to construct something that is closer in land mass to Australia as opposed to the Isle of Skye, and all the points come rolling in from your objective card for that round knowing the next round's objective card will deliver even more points for you. It's at that point that one of the players leans over and reminds you quite gently, that you can only score one island per game. At that point you curse quietly under your breath because this is what goes against everything you usually are playing for, where bigger and more expansive is better. It's ok though as it happens every time someone new plays the game for the first time, and you'll chuckle because  regardless of the number of times you tell someone. They will plough on instead and make continents instead of islands. It is as almost is if the name of the game is some kind of clue. 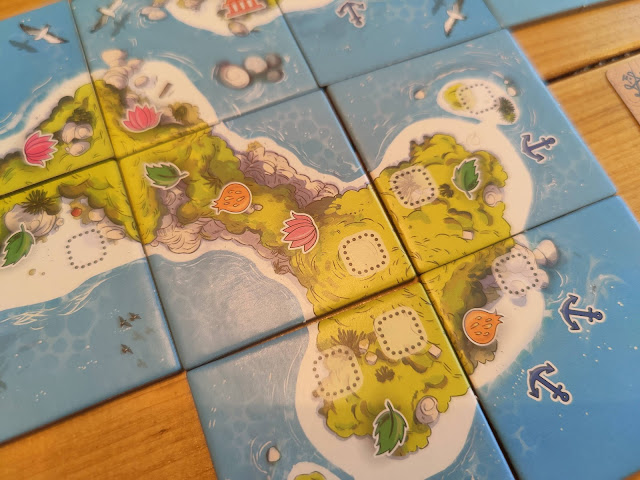 For those who want to up the ante, you can play with the advanced rules that increase the difficulty of the objective, and that introduce differing mission and rewards cards that require you to place your clan house based on more complicated resource requirements, often based on the availability of more than one resource. It adds in a difficulty level without moving things away to far from the core game, and should definitely be something introduced to the game sooner rather than later. 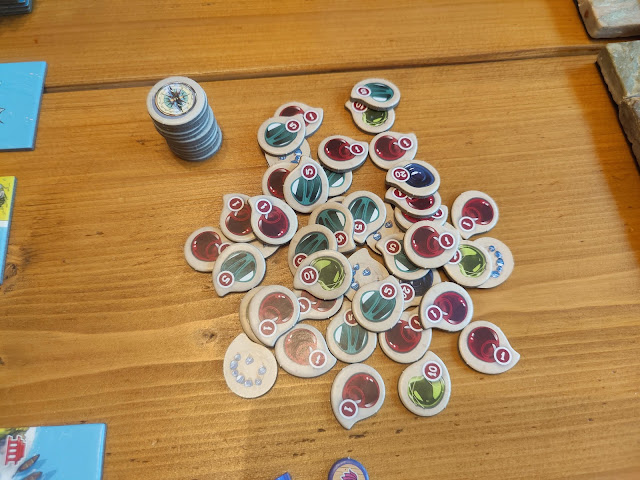 The core game is a strong enough offering on its own and is definitely suited towards the younger players, the more advanced missions and rewards are where the game is actually at, and elevates Small Islands from the edge of the table starter game to something that could be the main offering as part of your Tabletop Tapas for the evening. I wonder if this mode was more of the main gameplay than the simpler format originally, especially since there is a Great Explorer deck that can be brought into play once you have fulfilled certain objectives (and found it in the box). I can see me becoming bored of the main offering if that was all that was on offer, so I'm glad there are more complex modes in the box from the off instead of additional purchasable expansions. 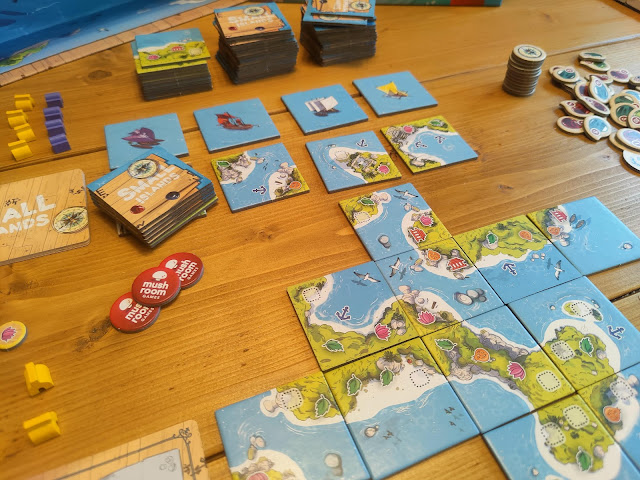 Small Islands isn't going to spend too long on your table and you won't spend too long trying to learn how it plays. The components look wonderful when set out and the rule book is well laid out and easy to understand. There's a fair amount of replay ability based on the randomness of both the reward/ mission cards and the advanced cards. Just bear in mind that you're building small islands, not Madagascar, and I think you'll be fine.
Ages 8 +
Plays 1 - 4 players
Plays around 30 minutes.
Designer - Alexis Allard
Illustrator - Aurelie Guarino
Development - Nicholas Bodart
If you would like to support more written pieces on the blog then please consider backing us on Patreon. www.patreon.com/werenotwizards
board game review Lucky Duck Games Mushroom Games Small Islands 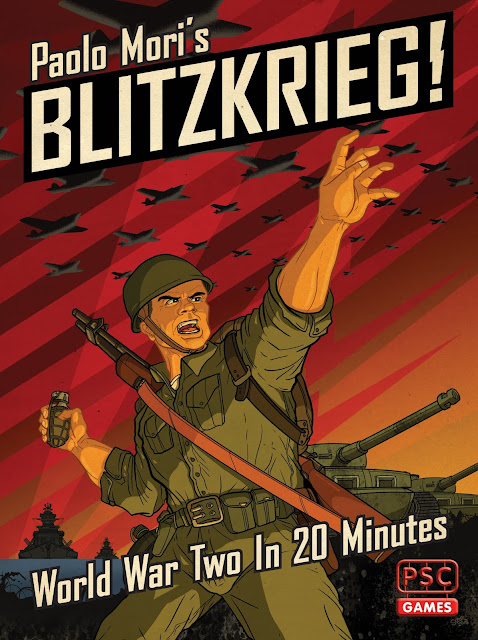