on September 16, 2021
This review is based on the final retail version of the game provided to us by the designer and publisher. We were not paid for this review. We give a general overview of the gameplay and so not all of the mechanical aspects of the game may be mentioned. 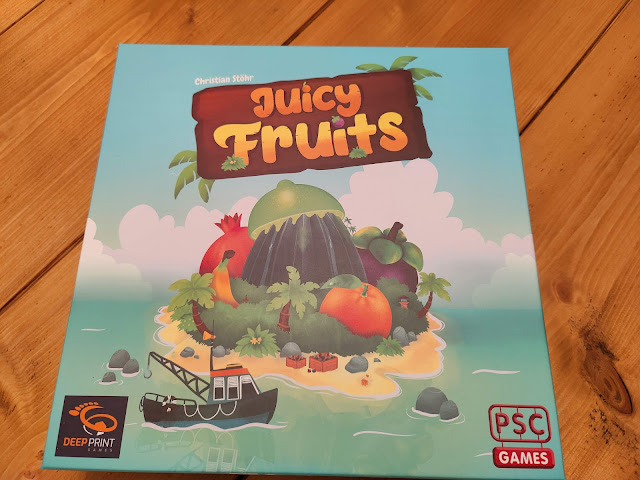 I like to play, play, play, play. Play board games with apples and bananas.
I like to pley, pley, pley, pley. Pley boerd gemes with epples and benenes
I like to pliy, pliy, pliy, pliy. Pliy boird gimes with ipples and bininis
I like to ploy, ploy, ploy, ploy. Ploy boord gomes with opples and bononos
I like to pluy, pluy, pluy, pluy. Pluy bourd gumes with upples and bununus
So in the first instance you're wondering what's going on because it seems like things are fairly complicated. It's only when you start to look for the patterns that you realise you're just following some simple rules that you're building up on as you go. You can easily continue with rules if you want or you can maybe change a few things to make it even more interesting. At least you won't feel the fear of a huge learning curve towering over you. After all, this is just simple with added sprinkles. 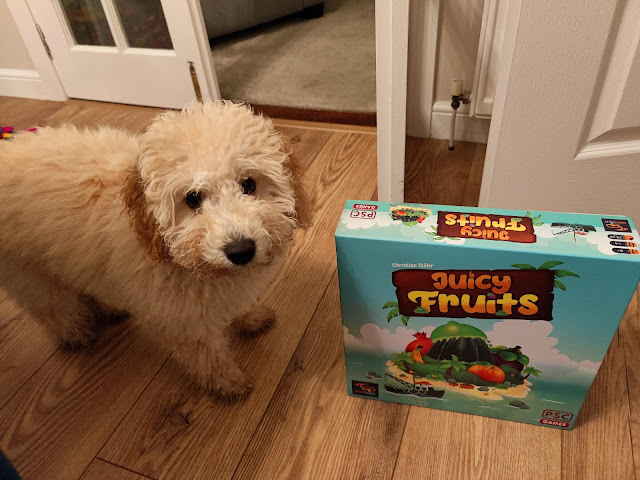 Christian Stohr wants you to learn to play a Euro without really getting you to play a Euro until you're half way through the game and you're struck with the dawning realisation as you move your score tracker up the score track, place a tile down to score more points and then try to figure out how to maximise your next tile so you can score more points that for goodness sake, there appears to be lots of Euro things going on here but it's all surrounded by fruit. That's a good thing though because fruit is meant to be good. In fact the first player is decided by who ate some fruit last, and the clever Trevor has even decide to include tomatoes in it. 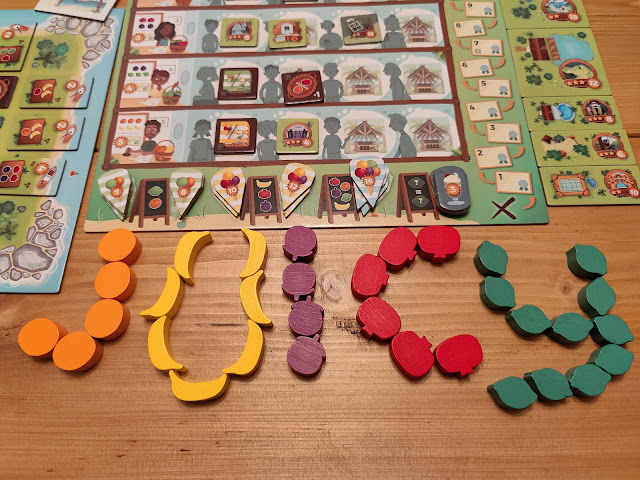 The fruit theme is doing so much heavy lifting to hide the fact that all you're doing here is increasing your scoring possibility by introducing either more powerful tiles that will score you big at the end of the game, or mobile tiles that increase the amount of fruit you collect on every turn. How you do that is what makes Juicy Fruits interesting. You have your own square island and boats line up on the shore with their own demands, and on your turn you'll move some of your movable fruit tiles in a straight line and collect the fruit associated with the tile. Wonderful solid wooden fruit pieces are added to your resource pile, and it's quite the joy to see your own fruit salad build up as you move your tiles across your own small board. As you collect the fruit you can then invest in mobile business tokens that will increase your collection quota or complete the wants of one of your boats on the shore. 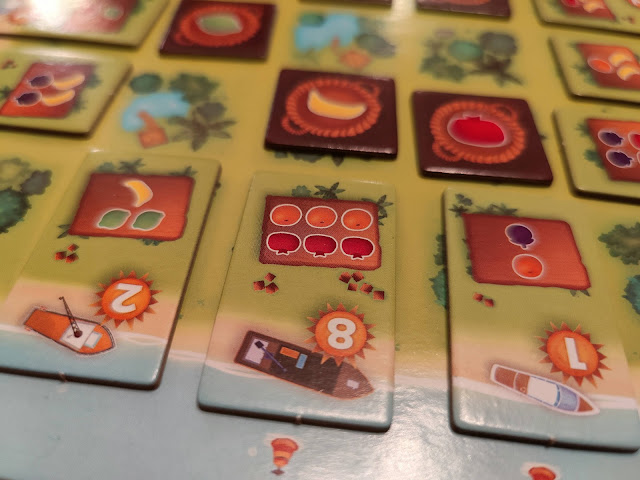 You might pick up an ice cream stall that will then allow you start making frozen treats or buy one of the bigger entertainment venue tiles that you place on your island at the cost of reducing the movement of your all important fruit tiles. Some of the more specialist stalls will score you points at the end of the game as opposed to immediately, and so sometimes you're balancing up the quick rewards with the longer, potentially higher scoring game. As Juicy Fruits progresses, the puzzle side will start to get involved, and its not unusual to be more restrictive in later movements to make sure you're not locking your pieces into tight spot that you can't capitalise on. The mixture of the tile movement and the progression of scoring opportunities is something that works for me and with a reasonable number of different ways to score points, it is going to take a fair number of plays to really start to figure out what is the best optimal play. 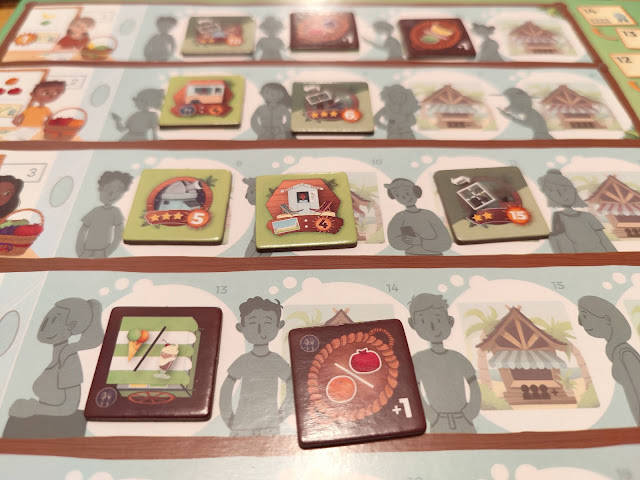 Every game there's going to be different tiles to pick from the bag, the randomness of the boats on the shore and for those who really want to dial things up, then you can bring in the juice factory which adds an extra track to score from. All these factors help to expand the replay value, with the downside being that randomness can bring along its own challenges that you sometimes have to make do with what is on offer rather than use a tried and trusted strategy. Juicy Fruits is a lot more involved than the theme and appearance first suggests, and as I've said earlier this is more a Euro by stealth than directly in your face, and surprisingly works well with the younger players. It's like a rose wine, there's a definite dryness here for those who love points and point tracks, but the puzzle tiles element adds in a lighter element, and sweet twist that along with the theme is quite refreshing and fizzy. 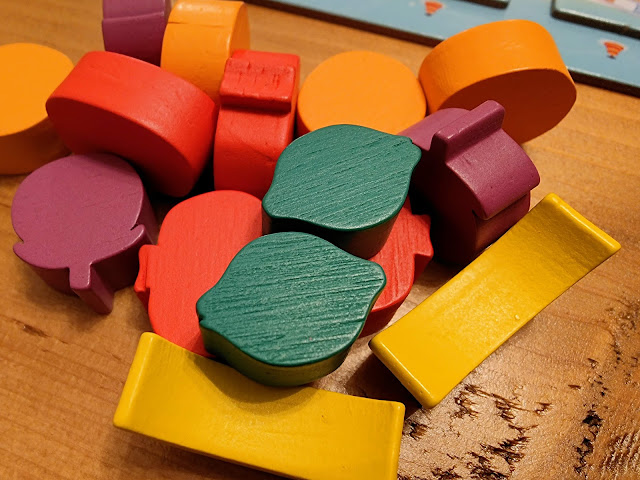 Juicy Fruits doesn't hang around, as the game enters it final phase once all the business licences have been exhausted, and they are claimed every time someone buys a business token, which can be extremely quickly. There are a reasonable amount of chits to sort out for set up, and so it's maybe a game you'll want to organise beforehand to ease the set up time. Once you get going and the game is in full flow, it does look rather splendid on the table. It does a lot of things that I like to see in a game, and if this is PSC games expanding on the type of games it has as part of it's offering I'm quite excited to see what is happening next. It takes a basic mechanical ruleset and builds on it, sneaking in Euro mechanics into a spacial scoring puzzle game. You're being offered at least two of your five a day here, and that's no bad thing at all. I like to eat, eat eat eat, I like to play a board game just like Juicy Fruits.. 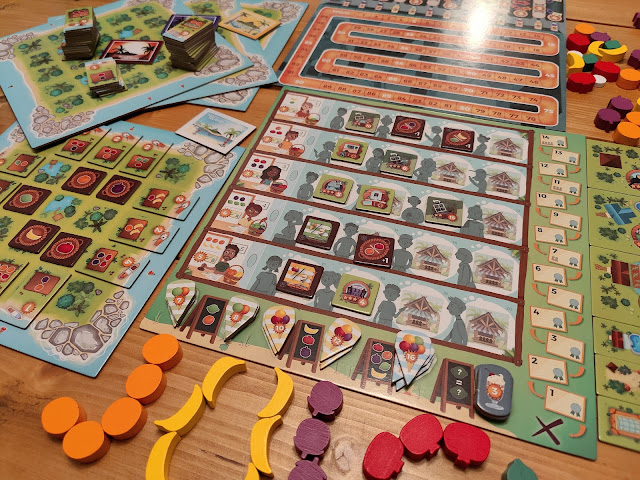 Plays 1 - 4 players
Ages 8 +
Designed by Christian Stohr
Illustrations - Annika Heller
If you would like to support more written pieces on the blog then please consider backing us on Patreon. www.patreon.com/werenotwizards
board game review Deep Print Games Juicy Fruits Board Game PSC Games