on June 09, 2021
This review is based on the final retail version of the game provided to us by the designer and publisher. We were not paid for this review. We give a general overview of the gameplay and so not all of the mechanical aspects of the game may be mentioned.

In fairness, I knew there was going to be a relatively big box, but I was not prepared for the sheer size of box that Farsight from Braincrack games contained itself within. Once you add on the secondary box for the miniatures then you have something that given the right amount of reinforcement could be used as a small table. Or even consider listing on AirBnB as something small and breezy in reasonable walking distance to the local shops and train station. Farsight gives the impression of something big and bold and brash and warlike and that is where the first rug is pulled out from under your feet, as it kind of is but in many ways, this is lighter than most of the miniature skirmish games I have graced my table with in recent memory. Farsight is about the theatre of war, but everyone is being really quiet and anytime someone is loud, they are told to shush or they are shot at. 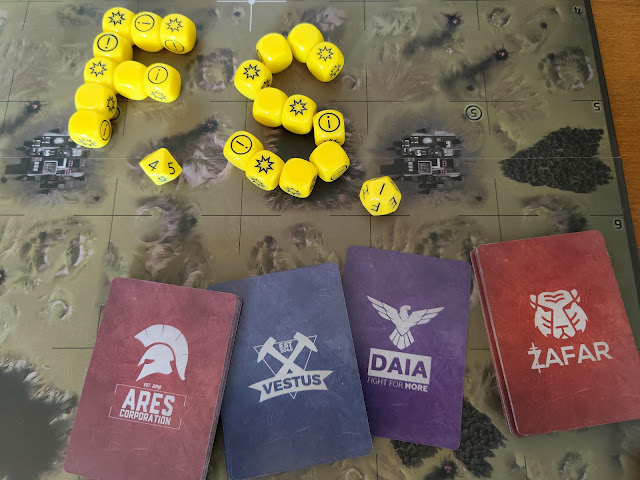 You need to know that there is a war, and there is weather and there is a lot of grey and green and brown on the board when you lay it out in front of you. The plot is neither about resources and control and things and you can surmise that it's down to some people who really don't get on deciding to see who can take over the most amount of territory and hold at least eight bases until the beginning of the next turn, thus showing undeniable superiority over the others. It works ideally at two players like most skirmish type games and while there is room for four to compete, it seems to be built for a face off rather than a group battle, which is to be expected. The rulebook is designed to get you up and running as quickly as possible with instructions on how to get you playing. It does this in a sometimes clumsy manner with some success, allowing you to add in the more complicated rules as you gain experience with the game. It's a chunky book, like most things in Farsight. 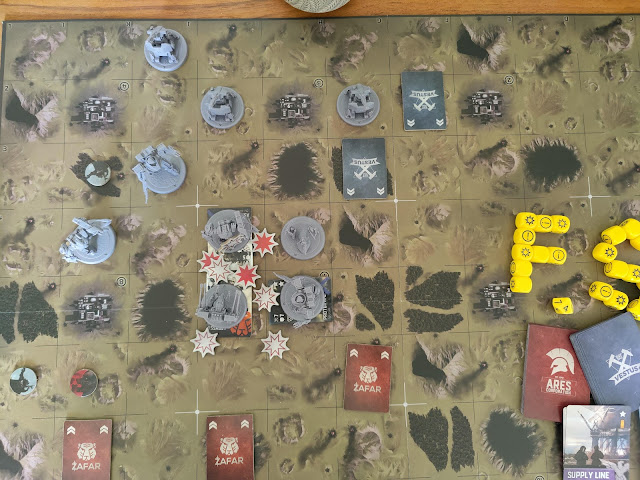 One of the most interesting aspects of Farsight is after all the promises of epic wars and huge conflict, you'll actually build the battle slowly over a period of time. Farsight is not a brag and show type of a game, where you'll be intimidating the opposing army from across the field with the sheer size and power of your battalion. You'll spend the first couple of rounds with very few units on the field and even less in view. In fact some of the most important units in the game won't even grace the field in a physical aspect. The designer Jamie Jolly has introduced hidden movement into Farsight, in the form of hidden assassins, saboteurs and Spies who will play no part on the main board, but exist on a much smaller wipe board. Even the main units will appear hidden on the board until they are revealed through combat. 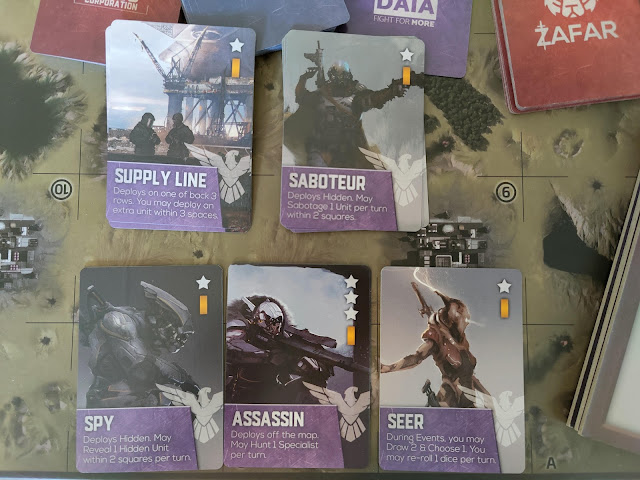 As you play through the game, these hidden special units will take actions in order to uncover or eliminate your opponents own special units, but within a restricted area. As the action heats up, it becomes more important to disable the opponents specialists, especially if you are wanting to maintain the element of surprise and even bluff where your battle units are. In that way, Farsight can play out like a longer tactical game, where you can actively plan a slow burning tactic, rather than deal on the shorter more reactionary level that you see on other games of it's type. Your opponent will see a potential pincer movement heading towards them but won't necessarily have the information on what units they might be facing, giving the game devious moments where you have forced them to commit units that are needed elsewhere while you sneak off and capture one of the twelve bases on offer. 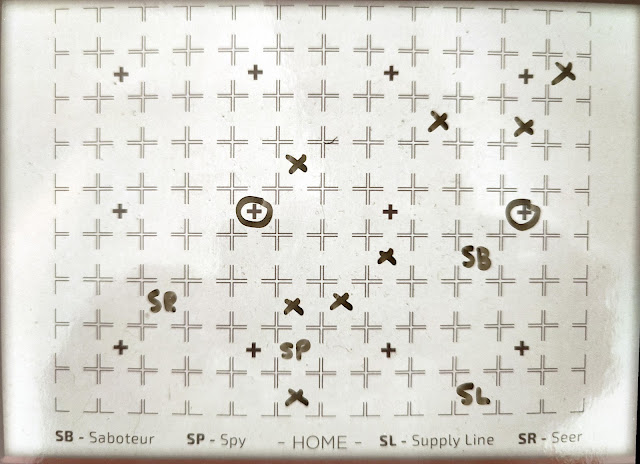 When combat happens, it it can be quick and deadly with units rolling to attack each other simultaneously, and regardless of the unit, each only has three life points. Which on first glance might appear to make little sense compared to the different types of units that might be facing off, but once you take into consideration the variation in the number of defence and attack dice each unit is gifted, it once again pushes the player to think tactically. As the game progresses, combat takes place at every point, and the flanking movement you spent three rounds planning pays off, as attacking units from the side or rear grants advantages. Farsight is very guilty of having the third act excitement  where you only really start to see the true vision that Jamie Jolly had at the end points of the game. That warrants giving the game a reasonable number of visits to the table in order to appreciate everything on offer. 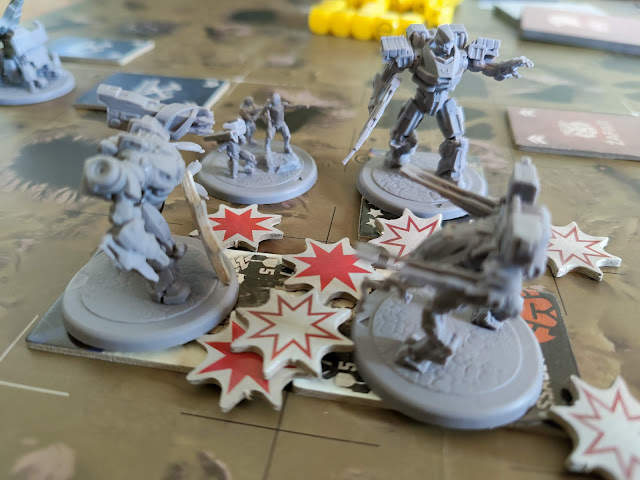 It's a very big game though, and my joke at the beginning of this review while maybe is extreme, is a genuine concern for me. The Base game and The War Chest with the miniatures is roughly the same size in space as the entire Braincrack back catalogue put together. That's a lot of shelf space for one game where most of the good stuff is kept locked away until you get through the first third of the game, and I have wondered if a version of Farsight would work just as well in a much smaller scale with tokens and reference sheets instead. I almost wonder how this would work in Tabletop Simulator, as I reckon the experience would be just as good. I also would have liked a bit more boldness with the colour palette, I know it's a fantasy futuristic battle with fields and lakes and mountains, but like Robin Williams said in Good Morning Vietnam, "What's wrong with wearing something bright, if you're going to fight in the jungle, clash.." 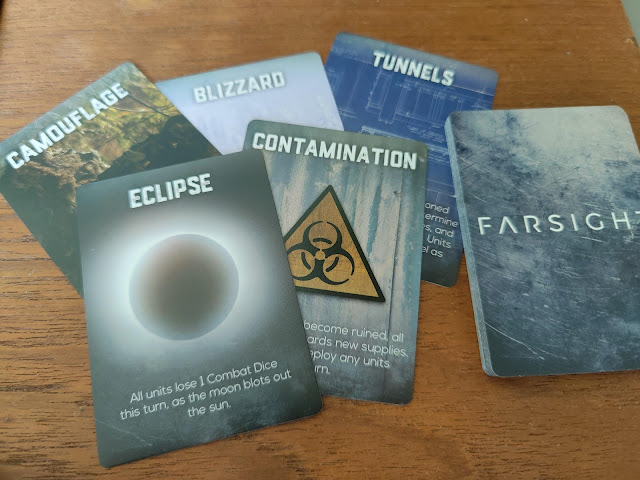 Farsight is a solid tactical experience on the the table, I really have come to enjoy the fog of war aspect and the hidden specialists mechanic. It builds up to a genuine intense crescendo as you play, and tries something new and different in the genre. I would have liked to have seen some bolder choices in the presentation and some less bolder choices in terms of the size of the game, but all in all this is going to suit someone who wants the battle without the need for thousands of stats and five hundred yard rulebooks.
You can find out more about Farsight by visiting https://www.braincrackgames.com/farsight
Players - 2 to 4
Designer - Jamie Jolly
Game Time - 60 to 90 minutes
If you would like to support more written pieces on the blog then please consider backing us on Patreon. www.patreon.com/werenotwizards
Braincrack Games Farsight Hidden Movement Jamie Jolly Tactical Skirmish