on May 13, 2021
This is the pre-production version of Pilfering Pandas, so the art, rules and mechanics may be subject to change over the next couple of months. Therefore please treat this as a first thoughts piece, based on version of the game that we were provided with. We have not been paid for the preview. We also do not provide a full play by play explanation of the game, so not all mechanics may be mentioned in the preview. 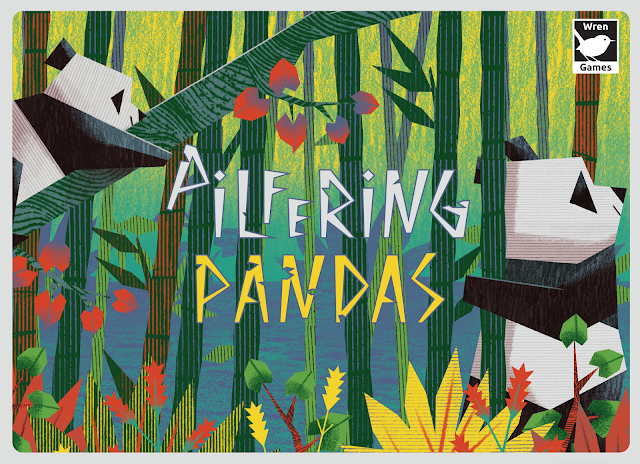 The rain pours as you make your way around the animals, checking to make sure they're all safe and dry, while you realise the squelching feeling in your shoe is because that suspected worn sole has now upgraded itself to a full on hole. You keep reminding yourself that you're here because animals are your life, and what could be more nobler than looking after a collection of some of nature's finest? It makes putting up with the silly safari hat and knee high socks almost bearable, but in this current climate where you feel wetter than a sea lion's bathing suit, you begin to wonder if your virtuous choices could have maybe been aimed somewhere slightly sunnier.
Rounding the corner to the meerkats, the rain gives up for a second and probably because it's only wasting good water for later in the day when it can get you for the repeat visit. There's a squeak from Keira, one of the Lookouts in the group, and all of a sudden there's a flurry of activity from the rest of the furry rascals, as they drag various items to burrows before you can ascertain what they've got their mitts on. Normally you'd be telling off some member of the public for sneak feeding them a sandwich, but since the lockdown, forbidden food is something that simply doesn't happen. However, in the last couple of weeks the gang's haul has included everything from berries to a surprised crab, and you're determined to get to the bottom of it. Something is up. The only surprising thing was that one some of the items, there were traces of black and white fur. But surely it's not going to be them. After all, who ever heard of Pilfering Pandas?
This is the back story to Wren Games latest card game, which is wildly different from its previous space based efforts in both Assembly and Sensor Ghosts, a couple of puzzle type card games that brought abstract ideas to the table, and didn't mind if that table wasn't too big in size either. Pilfering Pandas is more traditional[?] in that the main mechanic revolves around set collection and hand management and this time up to four players can get involved in helping the escape attempts of these monochromatic bears. Out of the box you have the choice to play competitively, cooperatively and even a solo mode, which have all had serious consideration to make them work effectively for each of the modes on offer. 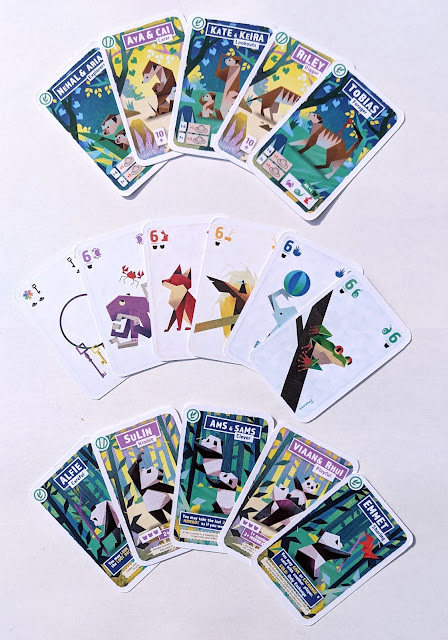 The main gameplay is about set collection, where you'll be trying to collect together sets of 'food' either by suit or in descending and ascending order, and place them in the trade area for the Meerkats. This will hopefully provide you in turn with the tools to allow you to finally escape the attention of the zoo keeper. Each of the Meerkats has their own preference for what they would like, and delivering their demands will result in you gaining additional Panda points that will further you around the simply board to your goal. You can either add a single card to the trade area to increase the current run, or you can start a new run completely, as long as the number or suit matches the previous placed card.
A continually filling hideout offers players the chance to grab more than one card at a time, but it comes with an attached risk for both competitive and cooperative modes. In Co-op there is a bigger penalty in the number of the moves the zoo keeper will take that turn with potential further penalties, and it restricts the card you need to lead with for that set as well. In competitive you are held back from continually dipping into the hideout to supplement your card stack. The hideout has the double use of also being the dumping ground for cards that are discarded at the end of a players turn. So you have to balance up the risk and reward of grabbing a pile from the hideout. Each of your Pandas also has it's own special move that can be triggered during the game as a one off, which adds in some variance to the standard gameplay. 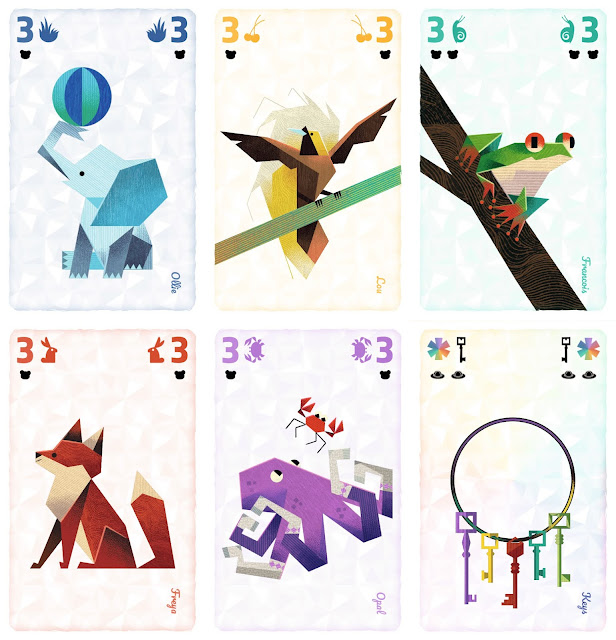 Oh my days this game looks wonderful, with the angular artwork from Gianfranco Campos just really sings something to me, with the stunning lines and colours that are subtle and at the same time, extremely beautiful. Each of the characters (and they are characters) is so very well represented in the card art, you wouldn't be blamed for wanting posters of each of the animals that adorn the cards in the game. There's always a temptation to go all out on card artwork, but it serves Pilfering Pandas extremely well when it is laid out on the table, and as you reach the point where the game is finishing up and the table is festooned with such delights.
Play comes to an end when one of the players triggers the final endgame by ending up with a zero hand, and then the final scoring differs for each of the modes. In competitive you are merely looking to outscore your rivals, and the winner is the player with the most panda points. In Co-op, you then need to calculate whether as a team you have gained enough Panda points in order to escape the zoo keeper, and so it leads to some requirements for much cerebral play. Either way, most games don't take much longer than thirty minutes at the most to get through and both set up and tear down is fairly quick. You are in reality only looking at a deck of cards and a smallish board for score tracking here. So this makes it very easy to set up and get going.
Don't let all the cuteness trick you though. Pilfering Pandas comes from the same minds that brought us both Assembly and Sensor ghosts, which means that what you have here is something that just like a Panda looks adorable but has enough weight behind it that if it sat on you then you would know all about it. While the competitive mode is a straight forward point scoring affair that most would be able to dive into with out much thought, the cooperative mode really shone for me due to its higher level of planning required due to the punishing end of game scoring. It's very easy to see what you thought was an easy escape being robbed from you as the zoo keeper catches you based on someone being too greedy with the hideout. There's a reasonable amount to learn in the coop mode as well, so it potentially will take younger players a few goes to grasp the difference in the gameplay. To their credit, Wren Games give alternative rules you can adopt to make the game easier to play.
Pilfering Pandas demonstrates that Wren Games continue to be a design house to keep an eye on, with stunning looking art, fun gameplay and multiple modes to ensure longevity, it's certainly worth considering adoption for your own zoo.
You can follow the Kickstarter by going to This
Game Design & Development: Janice & Stu Turner
Art: Gianfranco Campos
Graphic Design: Nik Bauer, Charlotte Williams & Janice Turner
Art & Graphic Design Consultant: Barb Allen
If you would like to support more written pieces on the blog then please consider backing us on Patreon. www.patreon.com/werenotwizards