on April 26, 2021
This is the pre-production version of Dice Hospital Emergency Roll, so the art, rules and mechanics may be subject to change over the next couple of months. Therefore please treat this as a first thoughts piece, based on version of the game that we were provided with. We have not been paid for the preview. We also do not provide a full play by play explanation of the game, so not all mechanics may be mentioned in the preview. 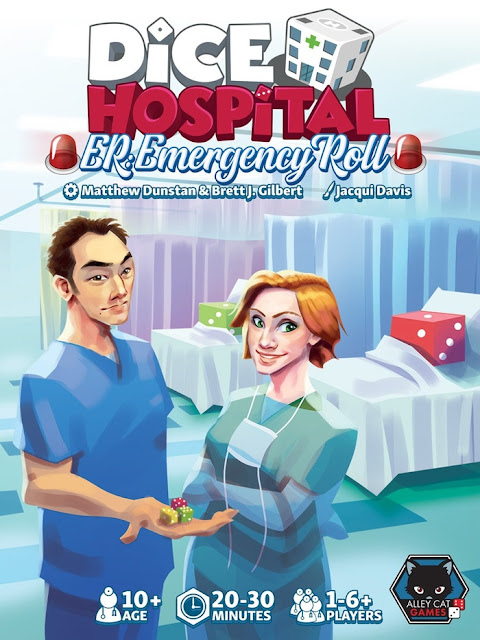 The Roll and Write genre has literally exploded over the last few years, and in particular in the last twelve months as face to face gaming has suffered at the hands of lockdowns and closed venues. Roll and writes are the darlings of twitch streams and zoomfests, where those taking part only need the maximum of a printed gaming grid and pencil, and the willingness to engage in the shenanigans of online chat and fun. I've personally witnessed Roll and Writes at both ends of the mechanical spectrum, from the simplicity of Kingdomino Duel to the mind bending behemoth of the incorrectly titled Rome and Roll. Hugely different games that follow the similar important main aim, which is simply that no matter what is rolled, everyone should be able to write.
Alley Cat Games is no stranger to the genre, with Welcome to Dinoworld being their previous entry to the stable, and Cat Café  and Paper Dungeons shortly joining the portfolio. Dice Hospital Emergency Roll hopes to add to that collection as an off shoot of their continuingly expanding range of successfully funded Dice Hospital games. The main aim of DHER is to control the influx of patients into the Emergency Rooms of the hospital that you control on your game sheet while maintaining your level of patience. 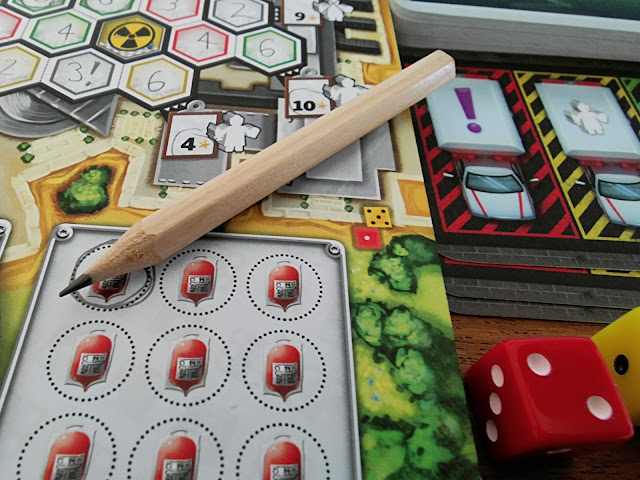 As with a lot of roll and writes, the player sheet doesn't really make much sense until you start to play. A grid of hexagons litter the top of the page, while underneath there are stethoscopes, blood bags, nurses and what looks like little death symbols, which actually turn out to be spaces for those who have unfortunately ended up in the morgue. Every turn you are trying to place new patients in your ward based on the results of three dice that are rolled, with each dice representing a patient in need of care. You can only place a dice in a ward in an ascending order that match the colour of that particular patient bed, and you can't leave gaps between patients, but you can switch between wards as required.
The Chief Physician has the choice of the first dice, leaving the other players to pick a set from the two that are left. On top of this the choice of dice also decides the choice of bonus you can take. There are stethoscopes that allow you to change dice values, or blood bags that copy the dice from the chief physician. You'll possibly place a secondary dice from a choice of values, add a nurse to give you a bonus or even isolate a patient so you can then place any patient value you want in the subsequent bed. 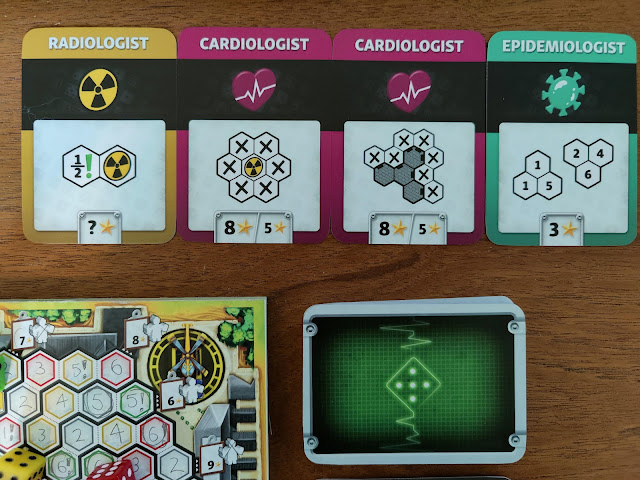 DHER is all about manipulation of the results, and as the game progresses and you run out of space to place patients, you'll be using up blood bags and stethoscopes in order to make sure you can safely place every dice value, as completing wards will really boost your final tally, but nurses can also severely alter results for those who bring them onto their wards. Finally, overseeing the whole process are a team of Cardiologists, Radiologists and Epidemiologists who will offer bonuses both during the game itself and at the end game. In these situations you'll be keeping an eye on the overall view of the ward in order to try to match the bonuses on offer based on the layout of the patients across the entire Department. So you might score points for matching patient numbers on the x-ray lab for the radiologist, while the epidemiologist will boost your score based on patterns of numbers between patients. It's an additional plate to keep spinning while you are trying to place patients in the ward and it can make a huge difference to snatching victory in games. 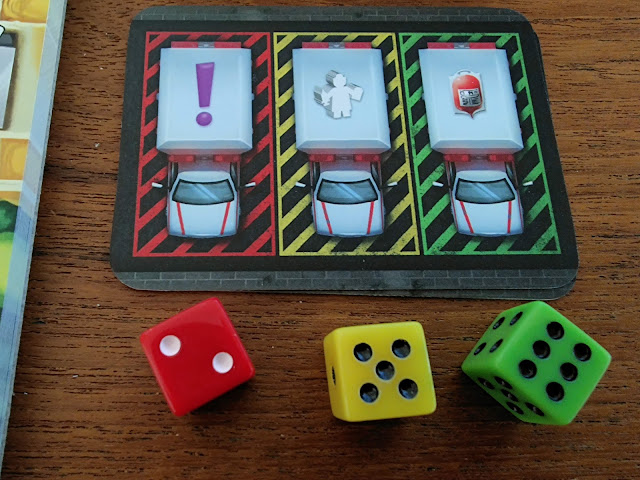 There's a lot going on here, and so for the first couple of games you might feel a bit overwhelmed by the whole potential point buffet on offer. Even if the Chief Physician takes the die that was going to help turn the tide in your own hospital, there's always something else that you can be working on to help you score down the line. There's a subtle seasoning of take that in play, as it's possible to scupper others plans by making them use up the valuable blood bag and stethoscope resources, something that may help them score as they go. Everything will be going smoothly right up to about two thirds of the way through, where you might start to see your fellow players having no choice but to put patients in the morgue because they simply can play them. What starts as light hearted ventures into thinking time as those around you start to balance in their heads whether to score simpler points by snatching the Cardiologist bonus, or play out the longer and more lucrative nurse track. 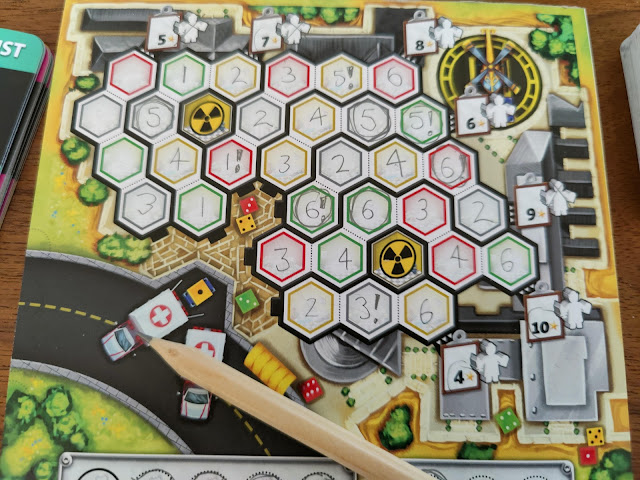 I'm sure this will be included in the final game, but I would like to see a reference card in the final version of the game, as DHER loses a lot of the slow simmering pondering when someone needs to stop just to double check exactly what the current specialist bonus is. There are so many different ways to be climbing up the point ladder, that sometimes it's easy to forget that you can be manipulating dice instead of isolating a patient, or marking up a critical patient instead. In a more positive diagnosis, it does mean that DHER offers a high level of replay ability, and it while you are normally playing over twenty five rounds, it's a quick and breezy affair and with so many different ways to manage your game, you might find you'll dust off your bedside manner and dive in again straight away.
Dice hospital ER delivers an enjoyable and sometimes tense experience as you fill up your ER with patients, it manages to balance the luck element with workable dice modifiers that ensure the race to victory maintains a steady balance, right down to the last few rounds.
You can find out more about Dice Hospital Emergency Roll by visiting https://www.alleycatgames.com/dice-hospital-er-emergency-roll
Published by Alley Cat Games
Designed by Matthew Dunstan and Brett J Gilbert
Art by Jacqui Davis
Age 10+
Players 1 - 6
If you would like to support more written pieces on the blog then please consider backing us on Patreon. www.patreon.com/werenotwizards
Alley Cat Games Dice Hospital Dice Hospital Emergency Room kickstarter Roll and Write