This review is based on the retail version of the game that we were provided by the designer and publisher. We were not paid for this review. 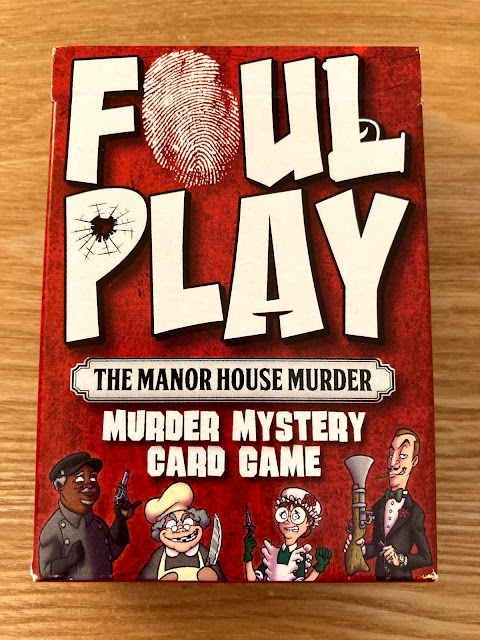 It was at this point that the atmosphere in the room changed, and not even the overly dramatical crackling of seasoned logs in the overly dramatical fireplace was going to warm things up in a room that was chilled by the cold vacuum.. OF MURDER. The silence was only broken by the crackling of knuckles by Smothers, the house butler. A man with a chip on his shoulder the size of a grown dolphin, and whose shoes squeaked just as much.

The detective breathed in sharply as though they were about to sing that really high and long note in Frozen that everyone attempts at least once. The cook, the stable hand and the gardener looked on in disdain, while everyone else just hoped that this time, it was going to be over for once and for all. The butcher, the baker and the candlestick maker? Well, that was just another silly story for another time.

The detective finished breathing in then started talking before they exploded.

"So, based on the evidence that myself and my colleagues have collected over the last twenty eight minutesss.." That last S came out in an excess of breath that sounds like a snake trying to hit that long and high note in Frozen.

The dramatic pause at this point would have worked wonderfully if it wasn't for one of the dogs that was lying by the fire choosing that moment to release a fart so potent that for the briefest second the height of the fire increased by six inches and The Gardener started to laugh. The Governess sighed. The dog went back to sleep, empty.

The detective looked around sternly while ever so subtly wafting their hand around them while the commotion settled, took another deep breath and raised an accusing finger.

"This person that murdered the Lord was the maid, Ivy Smothers!" declared the detective with a sense of self satisfaction.

"Well, I first started to suspect when.." continued the detective..

The detective fumbled again and checked their notes. Meanwhile in the far side of the room the other three police officers started to laugh. One of them came forward, grabbed the notes from their colleague, gently nudged them to one side and looked around to the room at the gathered employees of the manor, all staring in shock at the turn of events. The replacement police officer took a deep breath, stared daggers at the dog just in case, and announced gently 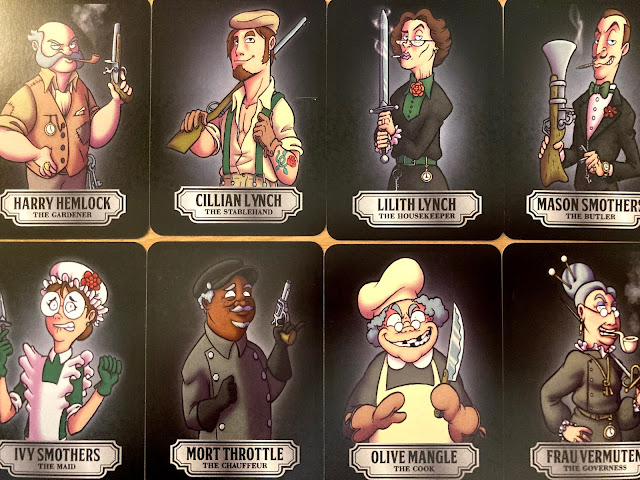 This is Foul Play, The Manor House Murder, a card game all about devious deeds and cards and gathering evidence in order to find out who killed the Lord of the Manor. During the game you borrow, steal and share cards with other officers in order to try to ascertain who decided to help the Lord shuffle off his mortal coil. There's two modes to try, the Good Cop one where you need to discover the killer based on three pieces of evidence that are shuffled into the deck and must be found in order to be able to make the accusation. More interesting, there is the Bad Cop game where all the evidence is left in the deck, but is there to be manipulated so if you are able to tie your evidence to the specific traits of a character, then you'll win that way instead. 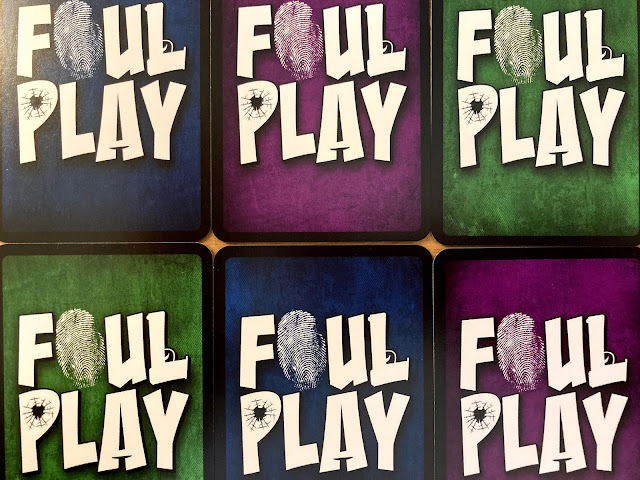 Each of the suspects shares a few identifiable qualities such as colour of hair, whether they wear glasses, or even if they smoke or not. Evidence cards will give you clues based on those traits and other cards will allow you interactive with other players in order to grab the cards you need. In all fairness, its fairly straightforward, with nothing that is going to cause you too much strain on the brain as you play. Foul Play is more about interaction with who you are playing with as opposed to relying on clever mechanisms to provide the entertainment. You'll steal cards from others with a grin on your face, or grimace as you're forced to share evidence with another player. This is a game that is meant to be part of a get together, something to get friends chuckling at a meal together. This isn't a game that will take hours to play, or maybe be something that you'll need to make special time for. The art is simple and functional and fits the bill it was designed for, however the different backs on the cards does mean there is a colourful presence on the table. 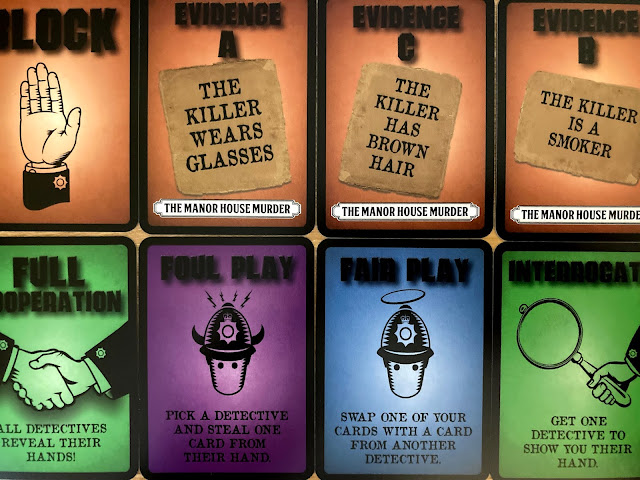 Foul Play is a light casual simple hand management game that doesn't overstay its welcome. We personally preferred the Bad Cop mode out of the two on offer, but all in all, here's a game that is simple to learn, straight forward to play and will make you smile as long as you aren't taking things too seriously.

You can find out more about Foul Play by going to https://www.foulplaygame.co.uk/