on February 27, 2021
We played this version using Tabletop Simulator on Steam, so the art, rules and mechanics may possibly be subject to change. Therefore please treat this as a first thoughts piece, based on version of the game that we play with. We played the session with a representative from Pandasaurus Games. We have not been paid for the preview. We also do not provide a full play by play explanation of the game, so not all mechanics may be mentioned in the Review. 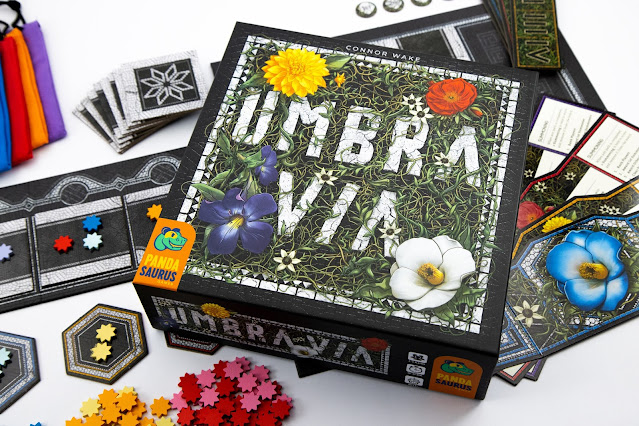 "We can do an online demo if you want."
Ah, the irony of joining an analogue hobby to escape the screens, only to find that more and more in this day and age that the screen is becoming the only way to get access to some games.
But this time, I grin at the screen because this time my lovelies, I'm no longer unfamiliar with how Tabletop Simulator works, and this time, I know that you can used WASD to move round the table and flip cards and take things out of bags and OH FOR GOODNESS SAKE WHY CAN'T THEY HEAR ME..
So after a channel change and a mic plug switch and some introductions we then spend the next hour faced with a grey board, grey tiles and flowers. So many pretty flowers. There's grey though. A lot of grey.
So lets start with something that might read as a negative, but isn't intended to sound like so.
Umbra Via needs a setting as much as a black Labrador puppy needs a reason to act like an adorable idiot. Often a setting will help define why you are doing something, taking mechanics and marrying them into the art and the components, so you're given a reason to move a piece here, or purchase that resource. In Umbra Via you can happily skip the opening story, because what you have here is interesting abstract-auction-tile-buying-majority-area-control-soul-flower type of game that doesn't lose anything from you just revelling in the mechanics on offer. I can imagine the conundrum Connor Wake was presented with when asked what the game was about. It's honestly something you don't really need to worry about. This a beautiful abstract affair. 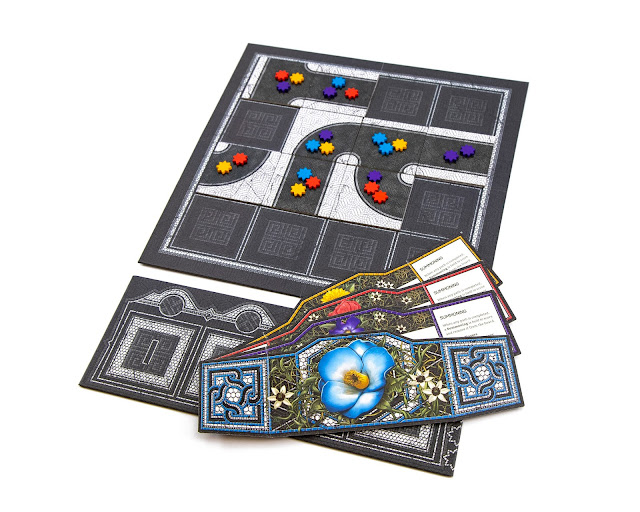 The game splits itself into two main parts, the first being an auction part where you are competing for tiles that look like miniature sections of roadway you would find in a toy car set. You play either energy flowers that are worth 1 bid, or soul flowers that are worth 2 bids, from a unseen draw, and you repeat the process twice. This gives you a chance to either try to outbid other players, or cement your position on the tiles you are wanting to win. Once decided, you'll then place the tiles in ascending order on the four by four grid based on the total number of energy flowers, but in a kicker, you're not able to alter the direction the tile faces. The soul flowers disappear leaving only the brighter energy flowers. You'll use your tiles to try to create a path/road and once completed, the player with the most flowers will win the path and then place their flowers back in their draw bag and also remove several flowers from their bonus Soul Tile. If you remove all of your Soul Flowers from your Soul Tile then you win. 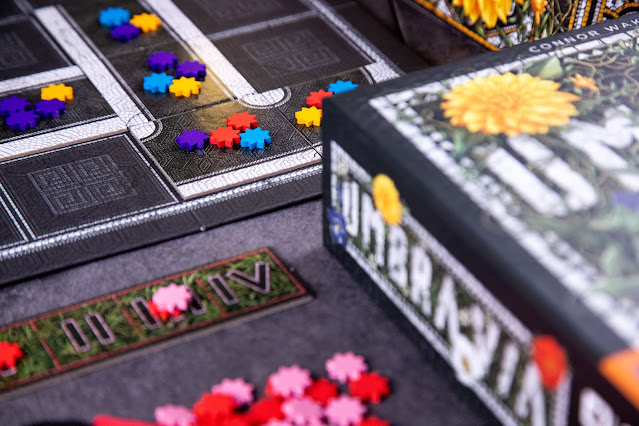 If this seems all very dull and pedestrian and straightforward, please believe me that this is very much not the case. This is a game about secret plans and schemes and constantly trying to outwit your fellow players who very quickly become opponents, that you'll try to bluff and trick and hope they don't guess your plans. At the beginning of the session, manners dictated that we played our bids with 'pleases' and 'thank yous' and the politeness that is reserved for people who don't know each other and certainly have never played a game together.
Towards the end, these walls were torn down, and you could hear the gritting of teeth over the voice chat as someone had clearly taken a piece that someone else desperately wanted. There were slight tuts and sighs as paths were placed in the wrong part of the grid, and the end of the game was decided by where I happened to be placing a piece, where I had no chance of winning, and I had to decide who I wanted to win, which was neither of them. Placing the final piece with the disdain reserved for trying to be the good loser, while internally screaming that next time, I would have to play more aggressively to gain the advantage. You see, I'm already planning how I want to play when I get another chance to play Umbra Via. To me that is a very good thing indeed. 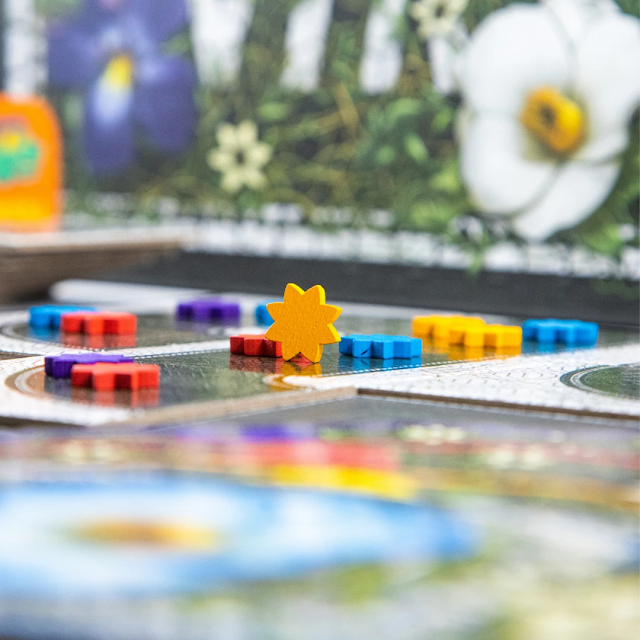 Don't come here expecting to understand the setting, don't expect to be wowed and wondered by the presentation. However, if you are bored of multiplayer games promising interaction, and want to be grinning with joy as you outbid someone, exude smugness as lay that tile that wins the round, then my first impressions of Umbra Via is that this may be the game you've been potentially looking for.
We were not paid for this Digital Review
We played the game on Tabletop Simulator
You can find out more about Umbra Via by visiting https://pandasaurusgames.com/collections/shop/products/umbra-via
If you would like to support more written pieces on the blog then please consider backing us on Patreon. www.patreon.com/werenotwizards
board game review digital review Pandasaurus Games Umbra Via