This review is based on the final retail version of Aroma - A Game of Essence, provided to us from Organic Aromas. We were not paid for this review. We were provided a copy of the game for evaluation purposes. 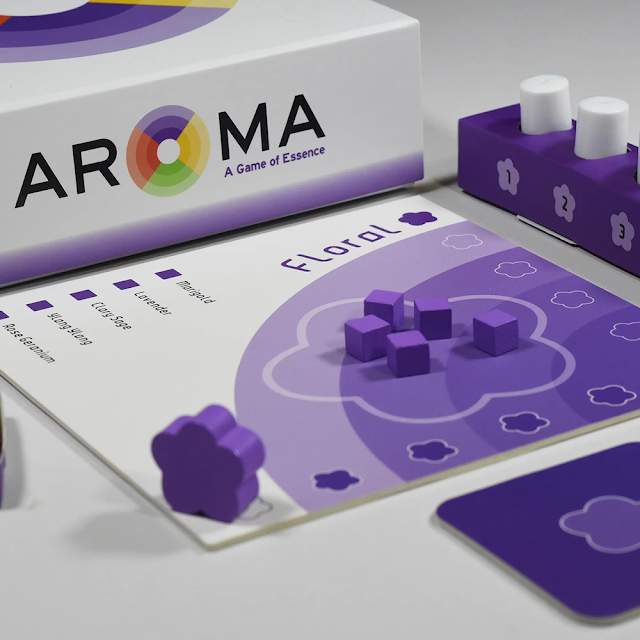 Ritual smelling. Or things that you would normally take in deep breaths of at the first given opportunity. The smell of fresh sheets when you climb into bed, the blast of escaping coffee gas when you first break the seal on a new jar. The smell of their hair when you are snuggling. The printed centre of a new rulebook. Scents are something that can take us places to the point where they can elicit an emotional reaction. Whether that be pleasant or unpleasant, smells have a way of coding themselves into our very memories to leave a lasting impression.

Interestingly enough, apart from the chemical joy of a freshly printed rulebook, I've never really played a game based around the sense of smell, and so when it came to being offered a chance to look at Aroma - A Game of Essence, the chance to try a new genre of Tabletop game wasn't something to be passed on.

Out of the box, there's a lot to like here, and in fact the box itself is a welcome statement in keeping things understated. In a world of box art where there can be just far to much. Aroma has nothing more that logos on all four sides of the box, and a wonderful set of concentric circles of bright colours on the top. This is someone used to designing pleasing eye catching products in a crowded room. It's not showing its hand (or nose ) until you decide to dive in.

The contents are bright and colourful, with greens, reds, yellows and purples, so when you do get Aroma to the table then it will shout at people sitting in the side lines, even if the smells don't get to them first. Each of the four game board designs is simple, but simple as in easy to read and not simple as in lazy. They represent each of the four sources of aromas, so you have Citrus, Trees, Floral and Plants. There's some delightful wooden meeples representing the shapes of the categories, and each of the actual aromas are in the smallest sample bottles with numbers on the bottom and contained within coloured cardboard holding trays. So when you get Aroma to the table it looks pretty good, as well as smelling pretty good.

Aroma doesn't just offer one game to play, but four, and all a variations based around identifying the various essential oils contained around the table. In Discover you have to identify the five random aromas that have been given to them. In Survive, your trying to identify the aromas of your opponents in order to eliminate them. Revolve is where you pass aromas around the table and guess as many as correct as possible. Finally in Collect, you'll be trying to work out which of the scents match your category so you can claim victory.

There's a common thread running through all of the game versions, which comes down to your ability to identify the different oils, but there is a clever use of the game boards and components in each of the different games, even down to how the first player is decided in each of the games. You get the impression that even though Organic Aromas were aware that the premise was relatively simple, they've still attempted where they can to polish the game above what others would consider acceptable. I really liked the little touches like the explanation cards included in the box that explain the benefits of each of the oils. And they are all the real deal, so you need to be careful when you are playing to make sure you don't get them on your skin, so Organic have included paper strips to make it easier to sample each of the smells. 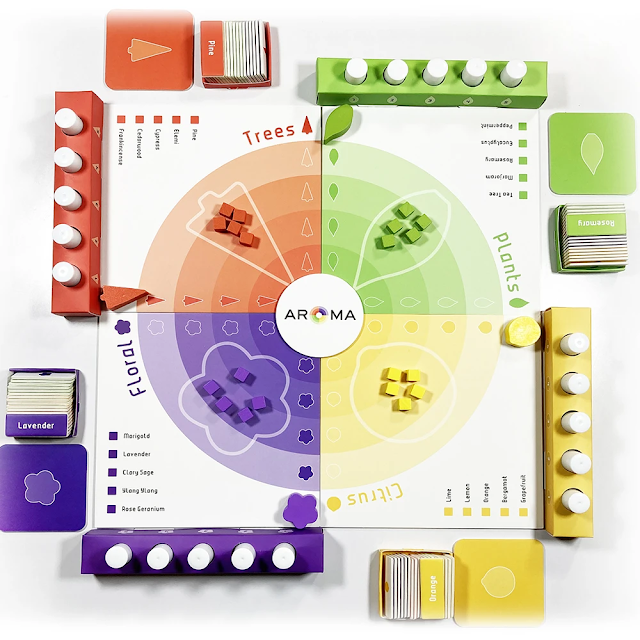 You're not looking at something overly taxing here, and when the overall main game mechanic is simply down to identification, then it's easy to throw it on the gimmick pile. It could even be argued that Aroma doesn't offer much past the first couple of games once you've become familiar with some of the smells on offer. However, you'd need to be some kind of olfactory genius to know everything within a couple of plays, and so you get these wonderful points in the gameplay when someone is adamant they definitely have Cedarwood when it turns out they had Grapefruit all along. It leads to laughter and grumpiness and overall emotions which can be nothing but good when you're reflecting on an evening's entertainment. Even if Aroma with all the gameplay variants manages to stretch to only having four or five visits to the table, it's probably not going to be that much different from most of the other games in your collection.

One of the things that is in Aroma's favour is how unusual its offering is. I can't imagine many people not wanting to partake in the chance to play a game that offers them something different from probably anything else out there in the Tabletop space. Funnily enough, it's easier to entice non playing family members to try the game out over the normal Carcassonne fare. For those who are fans of something that smells new and different, maybe Aroma is the breath of fresh Lavender you've been looking for.

You can find out more about Aroma - A Game of Essence by visiting https://organicaromas.com/products/aroma-a-game-of-essence