on October 26, 2020
We played this version using Tabletop Simulator on Steam, so the art, rules and mechanics may be subject to change over the next couple of months. Therefore please treat this as a first thoughts piece, based on version of the game that we play with. We have not been paid for the preview. We also do not provide a full play by play explanation of the game, so not all mechanics may be mentioned in the preview. 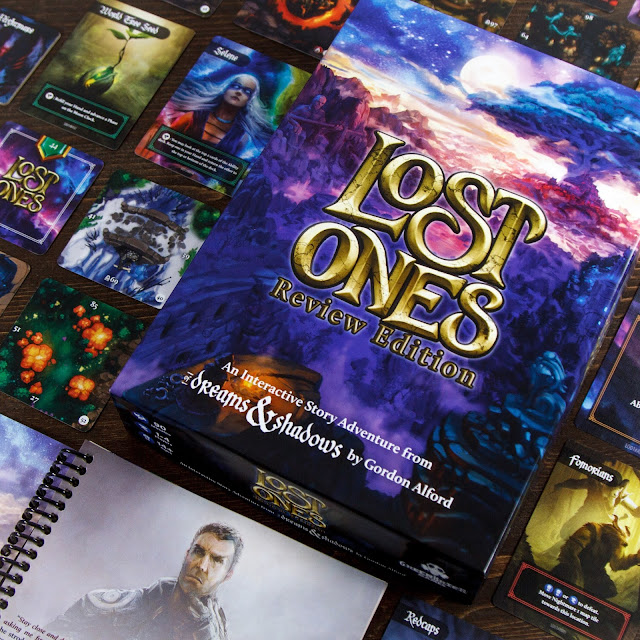 I was around nine years old, in primary school, and we were having our normal one hour reading time in the morning. Reading time was a strange type of affair, because you either brought in books that you owned yourself or had chosen something from 'the classroom bookcase'. If you had the pleasure of picking something from 'the classroom bookcase', then you had to be quick and crafty to make sure you bagged a book like Lion Adventure or The Secret Garden. If you were too slow, you might end up with some random book that you were stuck with until you were finished it (and boy there were some stinkers.) Luckily, my latest book came from home.
One this particular day, the teacher looked up from their desk for the third time in ten minutes, clearly agitated, and asked what was going on. It was 1983, and the book in my hand was Starship Traveller from Steve Jackson. Around the classroom, there were copies of The Warlock of Firetop Mountain, The Citadel of Chaos, and one lucky person was clutching a copy of The Shamutanti Hills. We were all sitting there, rolling dice and reading, flipping pages back and forward. the noise had been building over the last week, and clearly while we were meant to be reading. It maybe wasn't what the teacher had in mind. 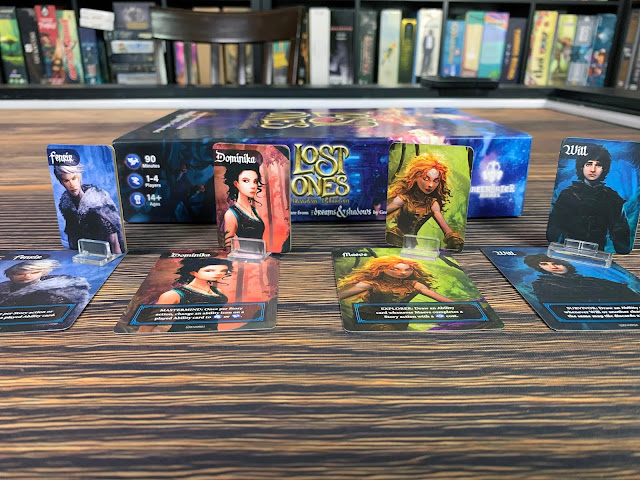 Thirty-seven years on, and I've switched the Magic of paper and rolling plastic for the clicks and whirls of a laptop, playing a copy of Tabletop Simulator on Steam and using technology and logic for fun. In the exploration game Lost Ones, you start off on a single tile, where a wagon has crashed and you are now considered 'on the run', but on the run from whom and where you are running to, are where the mystery begins. You know you are in the Fae World, but the rest is up to you to find out.
As you journey through the land, you'll use a mixture of traits in order to overcome obstacles and explore the land, all in search of a way to escape from the Nightmare of this world. 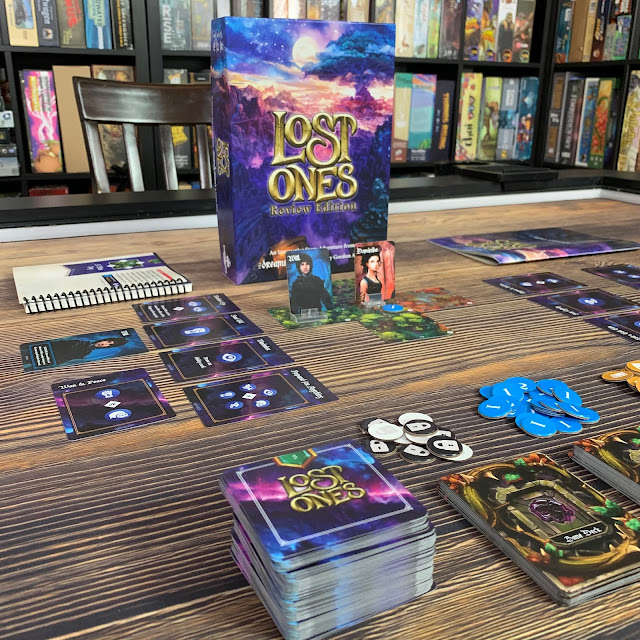 As you explore, you'll lay tiles and read the relevant page from the story book. Some might ask you to carry out actions, or cause you to enter into a fight, or make you decide from a multitude of available choices depending on the skills you have available through the action deck. Sometimes, you'll need to make a choice based on what resources you have to hand, as opposed to what you would prefer to do, and sometimes this will butt against the decisions you would have naturally made, but it adds an extra dimension to those choices. Sometimes you'll decide to take no action at all, hoping to save your abilities for when you need them, and sometimes you'll curse yourself for being too eager to use the hand of cards up you have to choose from. You have to be aware that in order to refresh your actions, you'll need to rest, and that will use up a phase of the moon, and move you closer to being never able to leave. 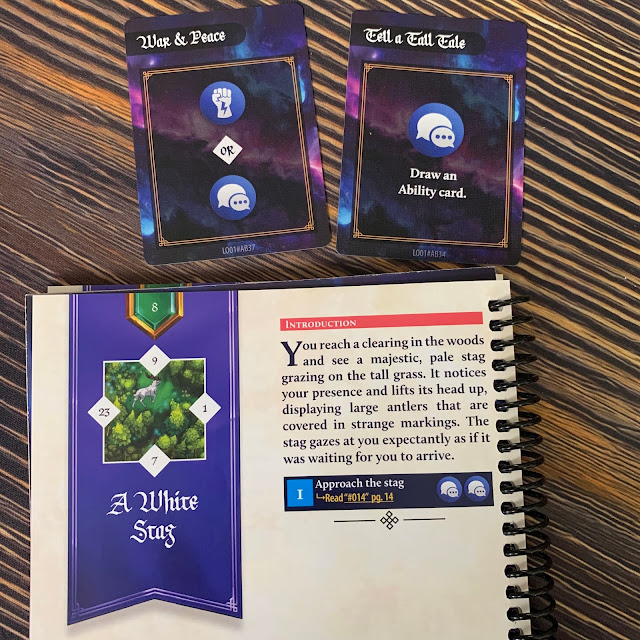 You'll eventually unleash the big bad of the Otherworld, the Nightmare, who will stalk you from space to space. Whether you are playing with one or all four players, if one of you ends up on the same space as the nightmare, then it is game over for everyone. Lost Ones allows you to stay as a group through the use of piggyback rules, and encourages you to share resources in order to overcome the challenges that lay ahead, pushing you to play as cooperatively as you can. Boon cards will give you extra abilities to help you push through to find the exit, while Bane and Foe cards will do their best to impede you and keep you lost in the Otherworld. Each character has their own special ability they bring to the game, so it encourages you to mix and match and replay to find the best combination. 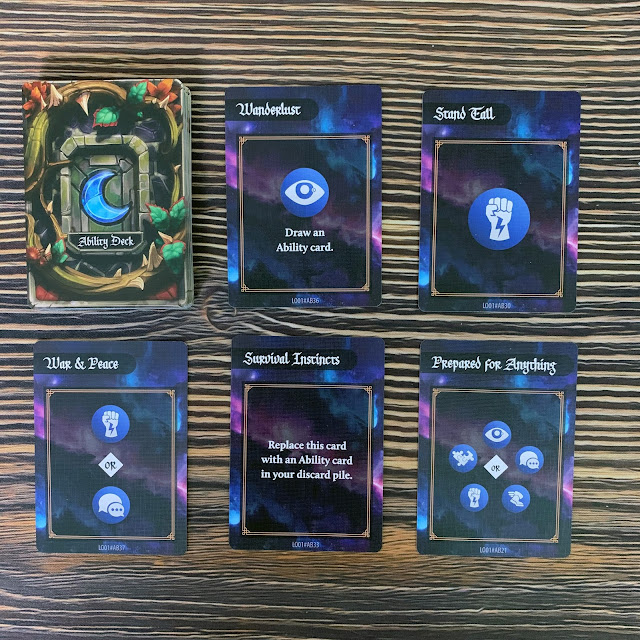 Lost Ones is all about the unfolding story and the narrative. So while it can be played in little over an hour if not less, this is a game about pacing and taking your time and enjoying the world building as it unfold. Which comes from both the storybook that you read as you explore but the very tiles themselves. Unlike a lot of tile laying exploration games, where the connections between tiles can be haphazard, once you have laid a few tiles down for Lost Ones, you will see the world grow in front of you, and everything connects with purpose. The illustrations on the tiles are stunning to look and just help with the immersion of the game. Often you'll feel enticed just to head in a specific direction to see what you uncover next.
The important thing to achieve in games like Lost Ones is that the exploration in itself should be rewarding and not just the final destination you reach. In this case, through the unfolding narrative of both the landscape and the storybook, Lost Ones does this exceptionally well. You'll normally end a game wondering what would have happened if you had gone on a slightly different direction to the way you took, and because of that, there is a decent amount of replay in Lost Ones going forward.
Due to the fact that the scenarios are in storybook form, expansions will no doubt feature in Lost Ones future and not require a huge effort to make them compatible with the base game.
This is going to be the game you roll out when you are having a one of those days where you need to play a game at your pace, without the need to feel rushed to the conclusion. Combined with a solid theme and easy to learn mechanics, I have been pleasantly surprised by what Lost Ones brought to the tabletop. Though playing digitally on the simulator made me miss the flicking back and forward of pages, I can't wait to see what the physical version will look like.
For those who remember the days of Choose Your Own Adventure, the nostalgia bell is going to be peeling like crazy. This is like someone brought my childhood back to me with added extras, but this time, there's no teacher looking up and scowling and asking what I'm doing. There's atmosphere, and tiles, and somewhere out in the Otherworld, a game you should consider giving a further look at.
You can check out the Kickstarter Campaign for Lost Ones on https://www.kickstarter.com/projects/gbg/lost-ones
If you would like to support more written pieces on the blog then please consider backing us on Patreon. www.patreon.com/werenotwizards