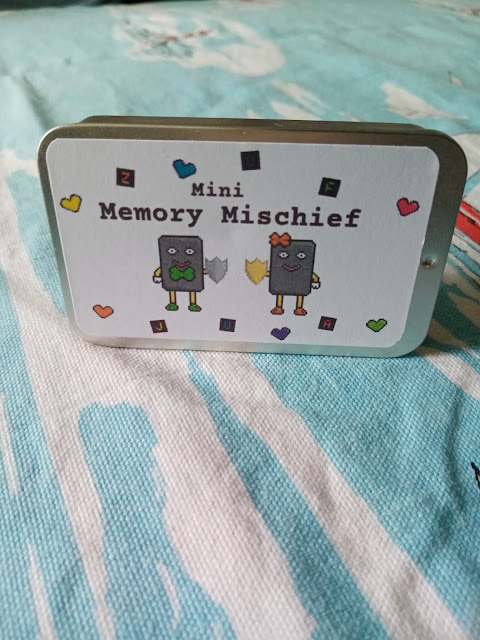 This is the pre/review for Mini Memory Mischief which should be launching on Kickstarter in the very near future. I haven’t been paid for my preview but did receive a free prototype copy of the game. Atikin Games is a UK based independent games designer/publisher, who successfully Kickstarted Tri To Win in January 2020. 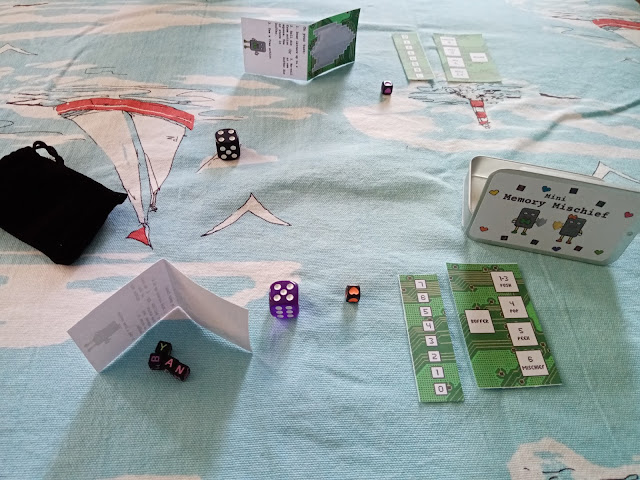 Mini Memory Mischief is a mint tin game where you attempt to put letters in alphabetical order on a computer chip board. You have one action which is determined by the roll of a die which you can either bank in the “Buffer” section or play, and one action of your own choosing. However, you can’t place the same action twice in a row, or elect the action that’s on the dice as your chosen action, or pass on your chosen action. The actions are to Push, putting a letter on your board, Pop, remove the top letter on your board from the game, Peek, look at your opponent’s letters which are hidden behind a screen, and Mischief allowing you to Push or Pop your opponent’s letters. The game ends when either there are no letters remaining in the bag or someone has filled all 7 spaces on their board. There are plus points for letters in the correct alphabetical order and minus for incorrect ordering. 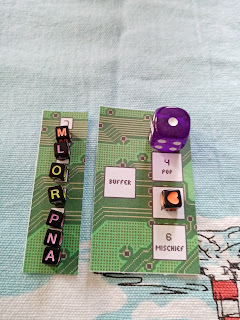 So, the game is tiny even for a mint tin game, and it has a certain nostalgic feel particularly for someone who grew up in the 80s/90s; the characters are computer hand drawn by Nikita and the components are charm bracelet letters which really took me back to 1992 art program drawing and holidays in Europe. The game play is surprisingly “thinky” with the decision of whether to work offensively and try to put as much rubbish on your opponent’s board as possible or defensively by taking the rubbish off of your own; however, it keeps to the suggested 10 minutes playing time so doesn’t drag with decision making. The rules are fairly good and concise though one or two little points weren’t entirely clear, such as when you use the dice and if you can pass on the chosen action. These are very minor points and we were able to play perfectly well with the rules as written.

Atikin Games, despite launching during the height of Corona Virus, were able to print and fulfil Tri To Win so I have no doubt that they’ll be able to have the same success with Mini Memory Mischief now that things are a little less crazy. If you’re in the market for a mint tin game and don’t have many 2 player games this nice little time filler is well worth looking into.

We were not paid for this preview

You can check out the other games Atikin Games makes by going to https://www.kickstarter.com/projects/atikingames/mini-memory-mischief
If you would like to support more written pieces on the blog then please consider backing us on Patreon. www.patreon.com/werenotwizards