on September 08, 2020
This is the pre-production version of Die of the Dead, so the art, rules and mechanics may be subject to change over the next couple of months. Therefore please treat this as a first thoughts piece, based on version of the game that we were provided with. We have not been paid for the preview. We also do not provide a full play by play explanation of the game, so not all mechanics may be mentioned in the preview. 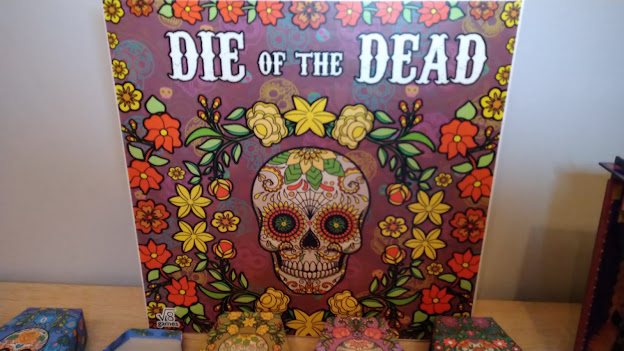 The argument and potential fear(?) of style over substance rears its precious little head as soon as you open the box for Die of the Dead. Now if the box art wasn't enough to make you wonder if this was going to be an exercise on how to eat a box of crayons and then projectile the contents over some pressed trees, then doubters will have their last shreds torn away as they gaze in awe at the technicolor rainbow in front of them as they delve deeper. I defy anyone not to just spend five minutes staring in abject wonder at strength of presentation here. However, (and it's a very important however,) this isn't extra as in too much. This is extra as in you walking up proudly with your latest artistic effort to the teacher and them asking you to go back to you desk and fill all of the page. To leave nothing showing. No blank bits. This is the Dia de Muertos, the Day of the Dead, and it is never celebrated in anything less than excited exuberance and wonderous effervescence. 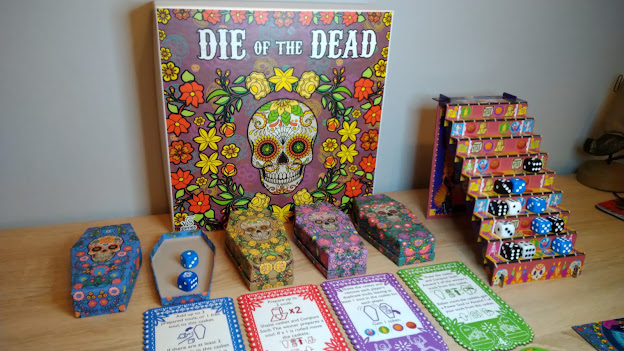 In the game you play as a friendly spirit, guiding souls up the marigold steps to the Land of the Living to reunite them with their families. Your idea is to have one of your die (souls) present on each of the nine steps of the Marigold staircase and therefore win the game. This is achieved by navigating the four highly colourful caskets that each have their own effect on the souls contained within them. You can almost treat it like a production line, where you start at the left most casket and then through taking certain actions, you'll hopefully end up with your dice on the right most side where you can then ascend your souls on to the steps themselves, providing you win the comparing action. You're always moving the caskets not the die, and you have to bear that in mind, especially in higher players counts, that your caskets you thought were going to help you make progress might move between your turns with your well planned die.

All of the caskets have a secondary action as well as their primary, which can do everything from gaining the player a token that allows some additional powers to moving the caskets along the row. There are four brightly designed caskets in the row and when you move them, they all take a jump to the right, with the right most casket taking up the first position. The position of the casket decides the action you can take with them, and with the caskets moving on such a regular basis, and three of them being closed, it increases the level of strategy required in order for you to get your dice where you want them to. 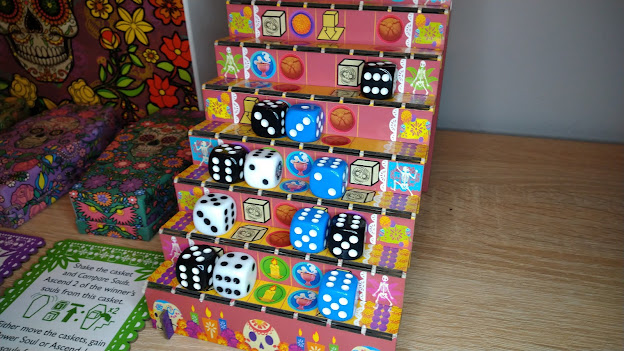 Die of the Dead is all about setting up multiple chances in order to get you where you want to be. The casket in the third position will do the most damage as it will remove die pairs from the caskets and potentially leave you with only one dice left. This can be frustrating as you can miss out on the next casket position and potential ascension, but it's all part of playing and learning how to adapt so you can surge on forward. Your dice are your focus, but it will be rare that you'll have all of your dice in a fully prepared state, ready to added to the caskets. You'll often be working with four or five at a time, and trying to make sure they stay active. It actually works in your favour to not have to many in play, as slowly deliberate plays will always work better that trying a three or four dice run on the stairs. 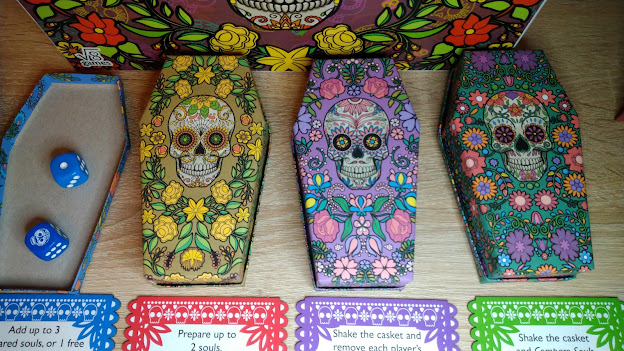 Sometimes you'll feel that the you're being assisted from the other side, as dice rolls just go your way, the caskets are staying exactly where you need them to be and you're winning the ascension casket time and time again. Other times, the caskets can be moving like a production line without stopping, and things just seem to be continually out of your reach. In the rare situations where the randomness has a vindictive mind of its own, Die of the Dead can feel unfair if you have one bad roll after another, and it can lead to a game potentially staying going longer that it should, like a lost spirit. The power souls do their best to alleviate the randomness where possible though, by allowing you to choose the die faces.  The all important 'compare' rule can take time to get used to, but that is a time thing over an explanation thing and will come to you with experience. 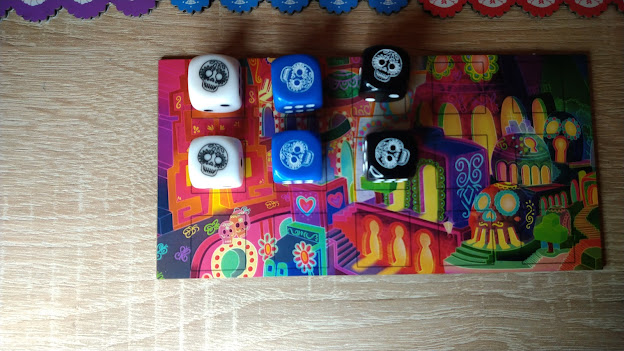 There is a lot to like here, and not only for the plethora of bright colours and stunning art, but the fact that James and Mark brought in Darix Meraki to act as a cultural consultant. They decided to make sure they respectfully handled the subject matter and make sure that any potential guesswork was completely removed from the equation. Some might argue that this might be a touch of overkill, but maybe when you are dealing with a cultural tradition you're not familiar with, then going further than checking Wikipedia and hoping for the best should be the norm, rather than something I need to highlight as special in the review. 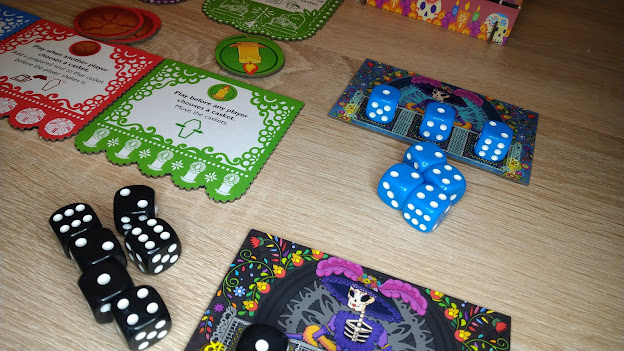 Die of the Dead looks amazing on the table. With the combination of the stunning looking caskets and the artwork on the staircase and player boards, when you get to mid game, it's going to be something that will turn heads and lead to enquiring questions. There's a larger than expected amount of strategy needed to help your souls back to the land of the living. I have concerns over the luck elements and the potential for games to sometimes ended up lasting slightly longer than you would expect but its a minor gripe as the game itself is extremely enjoyable. Previously, Radical 8 set my mind racing with their business investment game Forks, and with Die of the Dead, they might have just managed to earn a piece of my gaming soul.

You can find out more about Radical 8 by visiting http://radical8games.com/