on August 05, 2020
This review is based on the final retail version of The Taverns of Tiefenthal. We were provided a copy of the game by Coiledspring Games for the purpose of this review. We have not been paid for the review. 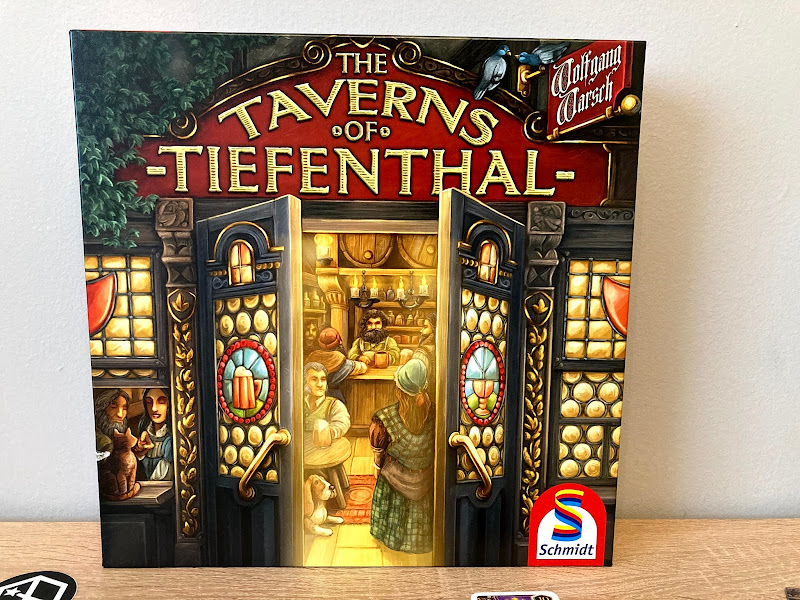 One of the extraordinary things about being involved in the lockdown, is discovering the amount of extra that goes into things that are the ordinary and mundane, in order to make them palatable. The absence of chopped tomatoes on shelves in the local supermarket suggests that there are people who have attempted that stalwart UK dish of spaghetti bolognese. They have decided to master the art of a decent tomato sauce, and probably had visions of taking that step into the territory of never needing to open a twist jar again. Fast forward to the horror and shock at the dinner table upon the realisation that the humble tomato is actually a rather sour experience without the careful disguise of garlic and onions and a dentist wincing amount of sugar. We've been conditioned, and I was going to say tricked, but years of big company sauce has trained us to expect tomatoes to be sweet, where the reality is that everyone just sits around looking disappointed, and nobody now wants to try your lasagne. 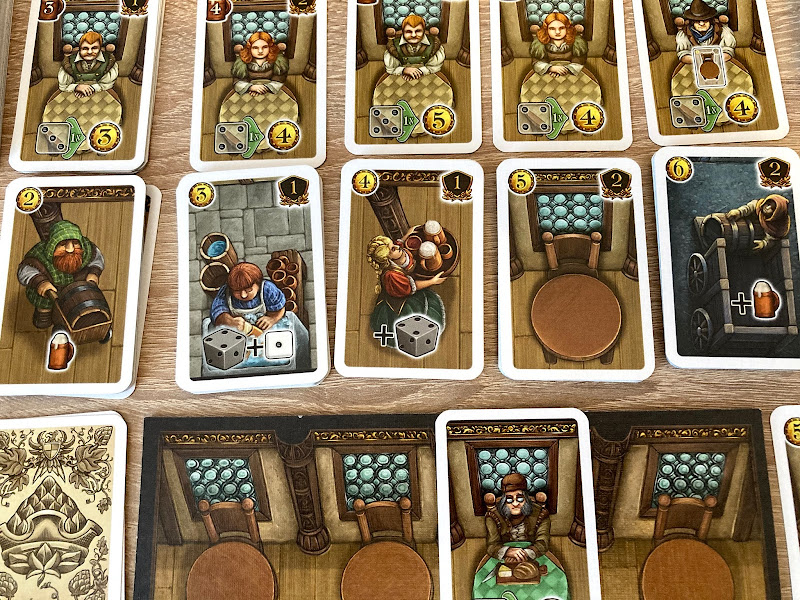 Taverns of Teifenthal designed by Wolfgang Warsch is similar to this, but imagine instead that the additional ingredients are sitting there, waiting to be used. However, the recipe is advising you that you don't need to add the sugar and the garlic until the second time you try the dish, until you've experienced the bitterness of the base without the 'special sauce'. I've maybe gone too far with the sauce analogy, but we've now committed and well, we're both going to have to live it. 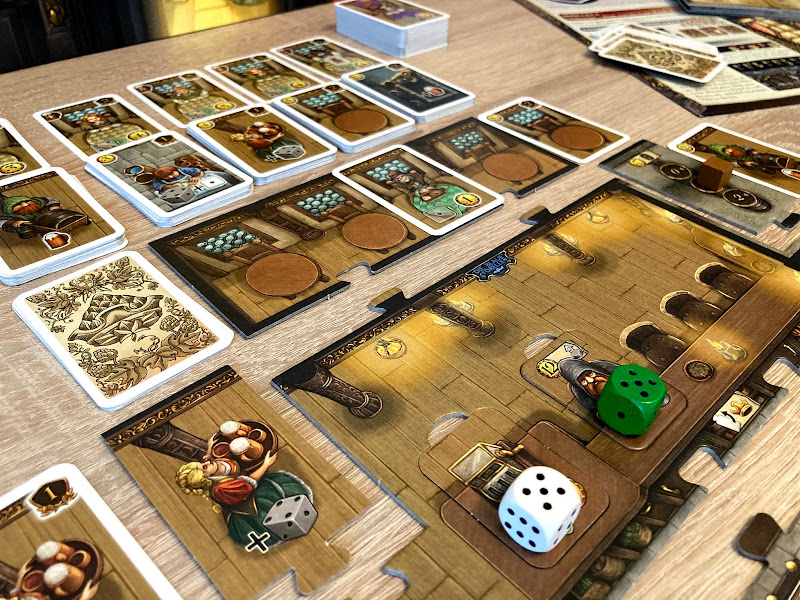 I've never played a Warsch game before. I was in two minds with The Mind and I have a slight fear of Doctors to try Quacks, however, I've heard nothing but praise for a designer who manages to turn their hand to several genres and win through. My first admission is that it took a lot of time to get the game to the table, and not because the rules are complicated, but because the sheer amount of components on offer is in itself a sight to behold. I didn't find the number of components daunting as such (please see Anachrony), but the difference with Taverns over so many other games is the fact that you are building the player board out of a number different jigsaw type pieces that slot together to form the bar that you run and manage. This in itself had me unpacking the game on several occasions only to run off and instead wash my hair, and for those who know me, that is indeed the shallowest of excuses.

Taverns is about deck building and dice drafting and upgrading parts of your bar in order to bring all the local yokels to your crowning establishment. The idea being to deal cards from your deck to have punters take up spaces at tables. This allows you to serve them your finest ale, and in turn give you coinage to allow you to purchase additional help, and therefore create more beer and entice more money laden card clientele. You activate customers and staff and 'The Monk' by placing die on their spaces matching the correct number required and reaping their rewards. As time goes on, you have the opportunity to upgrade your staff to permanent so they provide ongoing effects, and will grant you additional dice or beer or Thalers to start off with during the serving section. This becomes all important as the rounds progress as you need to grow quickly to bring in more tables and even nobles, to allow you to serve more and make more money. 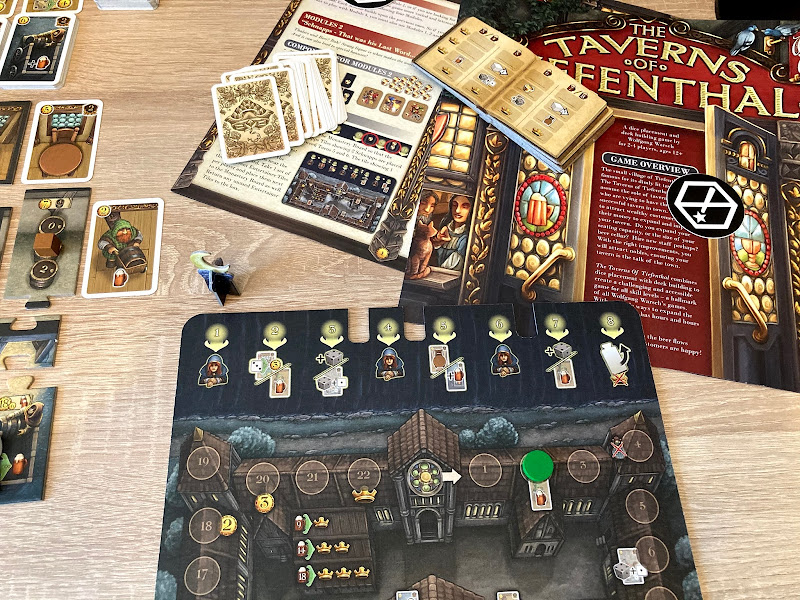 There's some smart things going on here. I like that you draft dice on beer mats that are shared among the players and so there there is the element of tactical decision making where you might decide to take a dice that doesn't help you, but also more importantly, doesn't help anyone else because you've decided to take from them. Like stealing prawn cocktail crisps in stealth mode. Once you've got used to it, the multipart board of bar jigsaw-ish-ness is actually a really smart idea, in that you are physically changing your player board to mimic the increases in functionality in your Tavern. 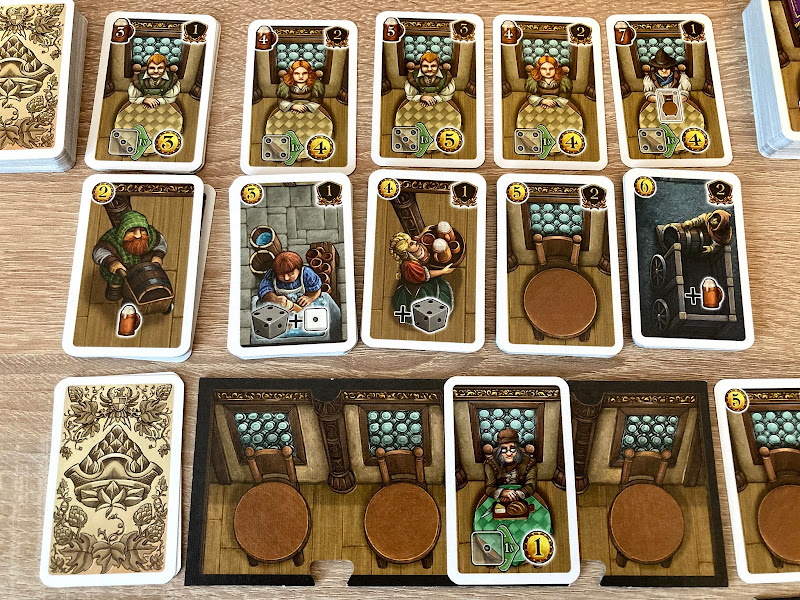 Unfortunately, like a pint being nursed over an hour, eventually your deck will warm, and empty, leaving only the dregs to provide any sense of alcohol based joy. Even with the dice drafting mechanic in place, a bad set of rolls and a poor sequence of cards can leave you with little to do in that round. If you don't draw your tables in your deck you can end up filling the tables that you have, and once the tables are full, you automatically move on to the serving phase. It's not uncommon for you to play a round where you have only managed to play punters, no staff, no brewers, no beer. This in itself can set you back completely until the next round, and with only eight rounds to play, then you can end up finding it tricky to build up resources to snag those all important nobles. These are big fish with their infinitely small bottoms, who can stack on top of each other, all at the same table, but are worth wonderful victory points at the end game. 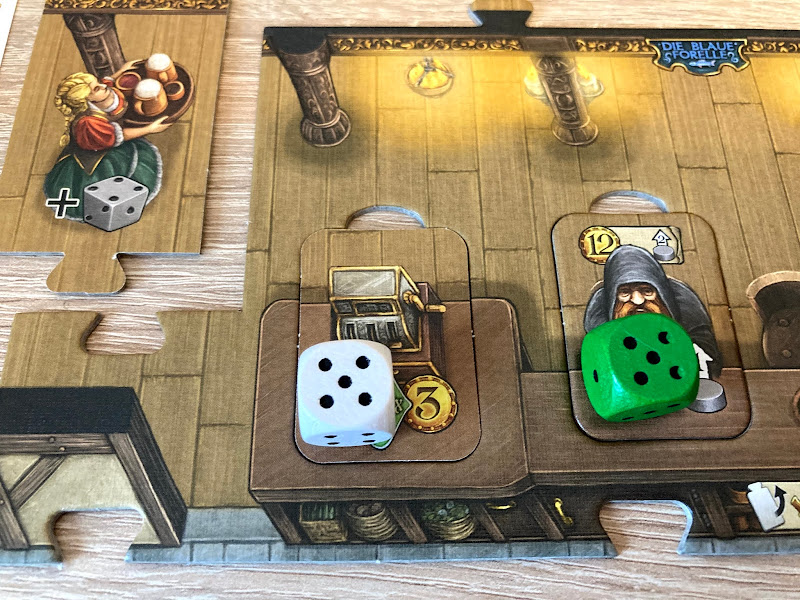 So it's frustrating. Ideally you should leave Taverns alone on the shelf, or keep it out of your basket, because its the bitter bolognese sauce that has something missing. For all the component parts, it is a fairly pedestrian game, and it can play quickly, but with everything you lay out in front of you, you expected there to be more. It's like running a pub isn't drama and karaoke and arguments and drinks being thrown in our Sharon's face, but actually just a business that needs to make money. And it will stay like that, for as long as you leave the additional modules that the game includes. 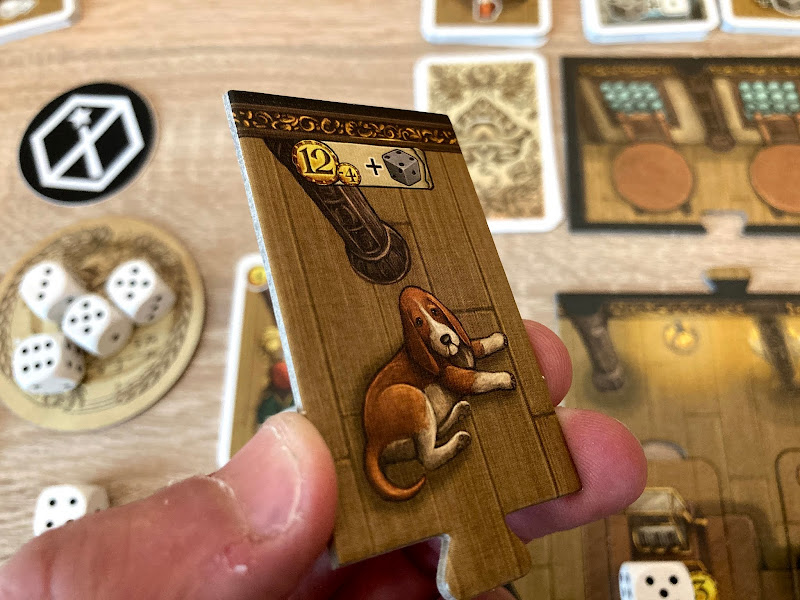 The modules are things like Entertainers, that allow you to gain beer and money even when the dice and cards don't want to help you, or even change the dice themselves if you want to. Or introduce the reputation track that brings in chances to earn victory points and additional schnapps that allow you to pay entertainers. Or how about beginning the game with a completely different set of resources? Or getting your new guests to sign a guestbook when you recruit them so you gain some additional bonus? 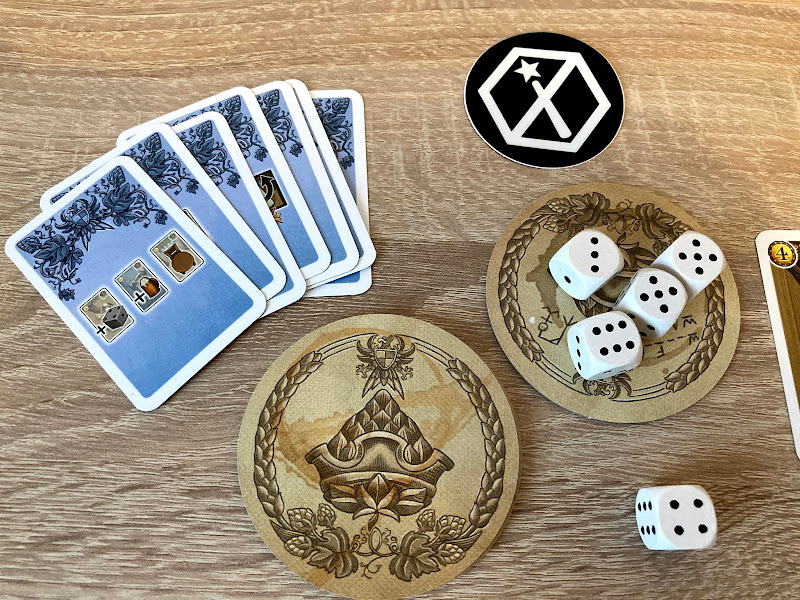 These may sound like tiny spoonfuls of sugar, but when you add them into the mix, then you start to see what Wolfgang Warsch was probably aiming for all along. The lack of decent rolls or full tables don't matter as much when you can counter act that with some Entertainment. Recruiting guests in the hope they turn up eventually, ends up rewarding you straight away because of the guest book. It starts to click better and removes the frustration of luck. I confess I'm slightly baffled by the decision to not have the modules included from the beginning, because while it is a reasonable amount to learn, it still doesn't quite reach the heavy head heights of some of the bigger more complicated Euros out there. I suggest you play two or three quick rounds to grasp the basics and then start again with some of the add-ons.
Leaving the modules out of the game sells Taverns of Tiefenthal short, leaves in frustrations, and creates reasons to not play again. Taking the plunge and putting them in, well, in that case, you might have just found another bar to prop up and call home.
Publisher - Schmidt Spiele GmbH
Designer  - Wolfgang Warsch
Artist -        Dennis Lohausen
Age 12 +
Players - 2 to 4
Plays in 60 to 90 minutes
You can find out more about Coiledspring games by going to https://www.coiledspring.co.uk
You can find out more about Schmidt Spiele by going to https://www.schmidtspiele.de/detail/product/die-tavernen-im-tiefen-thal.html
If you would like to support more written pieces on the blog then please consider backing us on Patreon. www.patreon.com/werenotwizards