The Changing Face of Legacy Games

(SPOILER ALERT - this article will contain spoilers of Legacy games).

When Legacy games burst onto the scene in 2011-12 with Risk: Legacy, the gaming world felt a seismic shift. For anyone unfamiliar with the concept, legacy games are designed to be permanently changed through a series of sessions by the game play itself. Often this involves the removal or tearing up of cards, the ability to name character cards and make permanent positive or negative changes to them. Sometimes you'll go as far as changing the playing board, often through the use of stickers and writing on it, but it always involves changes to the rules which are revealed through each playing session. 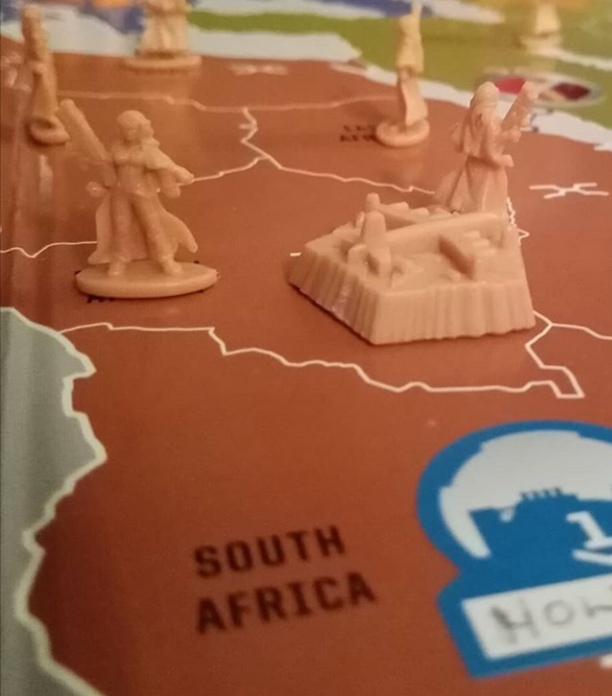 Risk and Pandemic (Season 1 and 2) have all of these elements. Like many others, my family played Risk from the earliest age (pretty sure I was 8 when I first played), and it’s the stated reason why a lot of those families and a lot of people in my family say that they don’t like boardgames. Who doesn’t remember the hours and hours and HOURS stuck round a table rolling dice while someone insists on slowly crushing another player, while said “little guy” refuses to give up, taking their two extra units for holding Australia and getting unbelievably lucky with the dice (yes amazingly my parents are still married). But the Risk franchise has moved on, improving on the basic idea with each new iteration, unlike so many other games which just reskin it to a theme (Cluedo I’m looking at you). With Risk: Legacy they’ve massively improved game length by including Red Stars as the means by which you win. No longer do you win by controlling the majority of the board but by multiple means of collecting said Stars. Notably capital cities count as stars which makes the game feel a little more realistic to war. There are other fun elements, such as the fallout events once you drop a nuclear bomb making certain areas no-go zones unless you’re a particular faction. This is Legacy at its inception and clearest. You change and grow and develop through each game, discovering new rules and tantalizingly sometimes missing out on opening boxes. Your board, armies and game will be permanently changed and importantly your board will look nothing like mine. The beauty of Legacy is it gives you a totally unique gameplay experience compared to other people who have played exactly the same game.

Similarly, Pandemic Legacy Season 1 and 2 takes the original idea of Pandemic and shifts it. In Season 1 you begin by playing a fairly normal game of Pandemic, however the difficulty is quickly intensified as decisions you make from game to game carry over. If a city falls to the disease in one game, it is permanently affected in the next. Situations can quickly escalate and you don’t know what the rules changes from one game to the next will be. You might think, OK I’ll Quarantine North America and try to block it off, then the next game it reveals that only certain characters can enter quarantine zones which now are more difficult to control. Just as an aside, Pandemic Legacy Season 1 is one of the best games on the market period. Season 2 isn’t quite as good though it is full of Legacy goodness. You start with a half empty board as communication has been lost around the world. Throughout the game large stickers are revealed to fill in the missing areas which you have to draw lines on the board to connect to cities to gain access to. Unlike Season 1, it feels a little more like the game story is on tracks. If you mess up and miss an important box, well OK open that box now because you need it. As another aside personally I was also a little miffed that we got the highest score level on Season 1, congratulating us on having forever saved the world; in Season 2 everything has gone to pot and all our heroic efforts were for nothing as the world sinks into chaos …. Hey I turn my back for one minute and have to save you lot again! What happened to eternal glory!?! 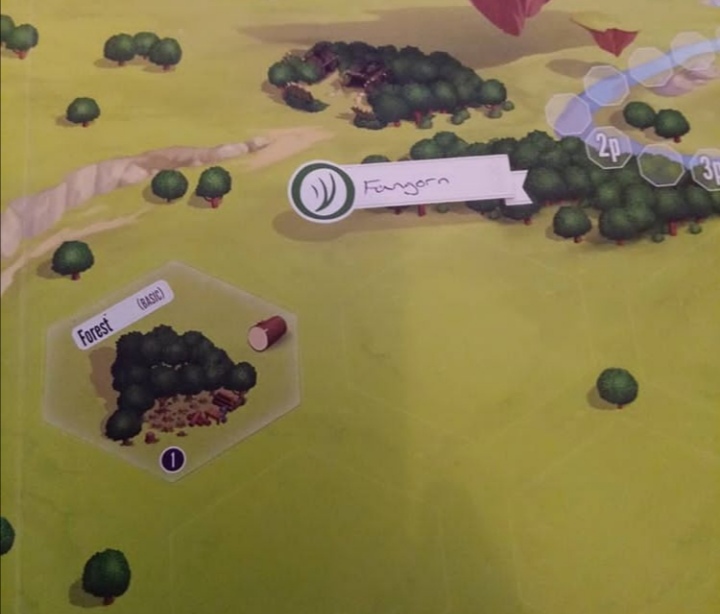 Moving on I would argue that Charterstone is possibly a Legacy game but with a little “l”. Now I know there are mega fans of Jamey Stegmaier who this may annoy, and I respect that, Jamey is a towering presence in the industry and a thoroughly nice guy. However, I happen not to like worker placement games, so I really didn’t like Charterstone. At its worst I found it boring. At its best I found it disappointing because I couldn’t get my series of villages to kick properly. Again, as with all legacy games, it had revealed rules, stickers which covered each other up, characters which you name and change over time. But it also holds your hand and leads you through the game, opening most (to be fair not all) of the boxes and leading you through a story. There’s no way that I can not open boxes, the King is coming and he will pick your village to be the Eternal City and no amount of deliberately pissing him off or not trusting the clearly malevolent old codger will stop that.

Machi Koro Legacy again is a very different beast. I would suggest that if it is a Legacy game is with a tiny little whispered “legacy” if at all. It’s a fantastic gateway game to introduce more casual gamers to the concept of Legacy, which can distress and unnerve players with the seeming destruction of your often frankly very expensive game. Machi Koro includes the standard elements of reveled rules which change with each game, added cards and game elements and stickers, but that’s it. Unlike Risk and Pandemic where the stickers are integral to the continued playing of the game, where you may not get through all of the elements or be able to open all of the boxes, in Machi Koro the stickers are just decorative and you get to open, see and experience everything. Don’t get me wrong, I love it, it’s got totally adorable minis which fill an actual gameplay need (though a counter would do), it solves a couple of tactical problems I’ve always had with Machi Koro, and is Kawaii in all its glory while still very much being Machi Koro. It’s just not particularly LEGACY. 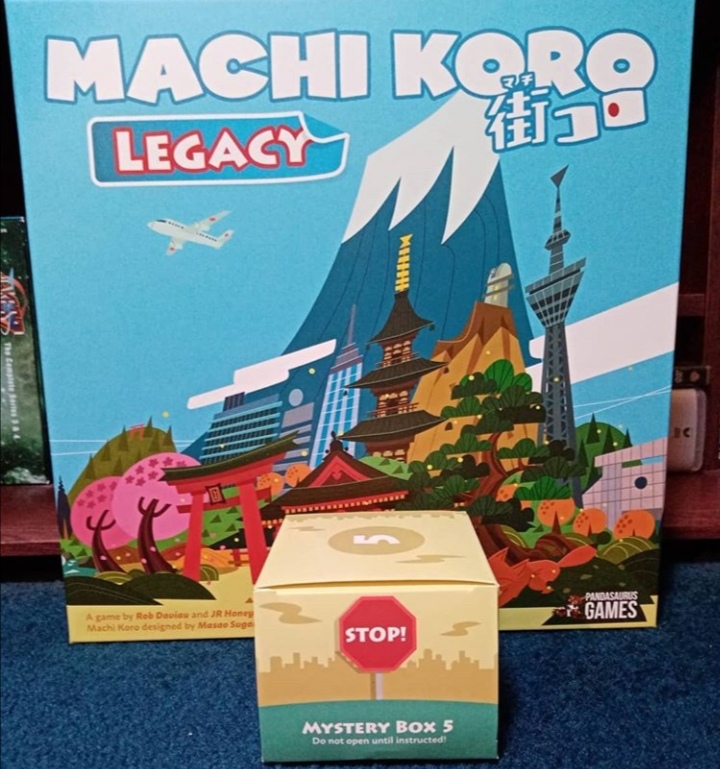 Which brings me to maybe my main point. I like a Legacy game which I feel in control of, one where I know my board and game play experience might be vastly different from yours. Your Risk or Pandemic board won’t look anything like mine; you won’t understand why Ho Chi Minh City as the epicenter of our fallen world now makes us shout “Not Ho Chi Minh City!” if its ever mentioned in real life, or that Iceland is a baren wasteland populated only by nuclear zombies. But I’m pretty certain my version of Charterstone and yours will look pretty similar, and our gameplay experience will be almost identical (with Machi Koro this isn’t even a question, our copy will look like your copy).

There are a lot of games which have legacy elements. Ravens of Thri Sahashri has you open new rules through each new game; Sherlock Holmes Consulting Detective has expandable content, with the newspapers being used from game to game, and can only really be played through once; but I wouldn’t say that they’re Legacy games. In the nearly 10 years that Legacy has been a thing the term seems to be getting a little stretched and overused. I would argue that a Legacy game has to have a board that is permanently and dramatically changed for important game play reasons, have player cards which can be improved or negatively affected from game to game, and have revelatory rules. Maybe there will be more games like Risk: Legacy in the future, but if the definition keeps getting broader and broader, I sadly don’t think so.

Or follow them on twitter by https://twitter.com/ManOKentGames1
If you would like to support more written pieces on the blog then please consider backing us on Patreon. www.patreon.com/werenotwizards
Charterstone Legacy Games pandemic Review