This review was based on the retail version of the game. We were provided a copy of this game for the review. We were not paid for this review. Dan Ackerman has appeared on the Podcast previously. 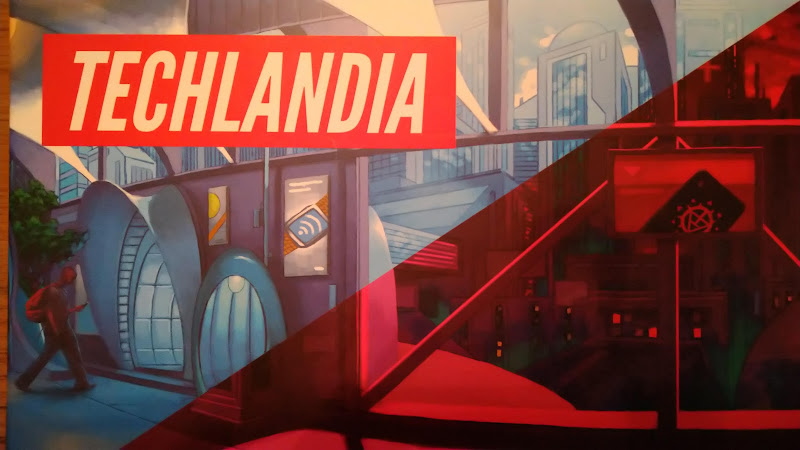 How do you make something relevant and how do you keep something relevant? The issue with using
something 'in the now', with using the current zeitgeist, is that you can wake up tomorrow and the excitement coffee has already grown cold, and 'the now' things taste old and ever so sightly out of place and potentially bitter. Its the reason that so many games are set in the dystopian future, or in a historical context. Ideas and concepts don't look out of place when they are already detached from the daily reality staring you in the face. You can't age something that was 'of an age' when it comes down to it.
On the other side, if all you know is the now, if all you know is the slight taste of the future, and if your day to day is writing about shiny technology bells and whistles. And if you are Dan Ackerman, it makes more sense when you design your first game, to lean on what you know, and to have people nodding along as you drop familiar beats while you weave your tale. It makes it easier to involve your audience and gain their investment quicker. 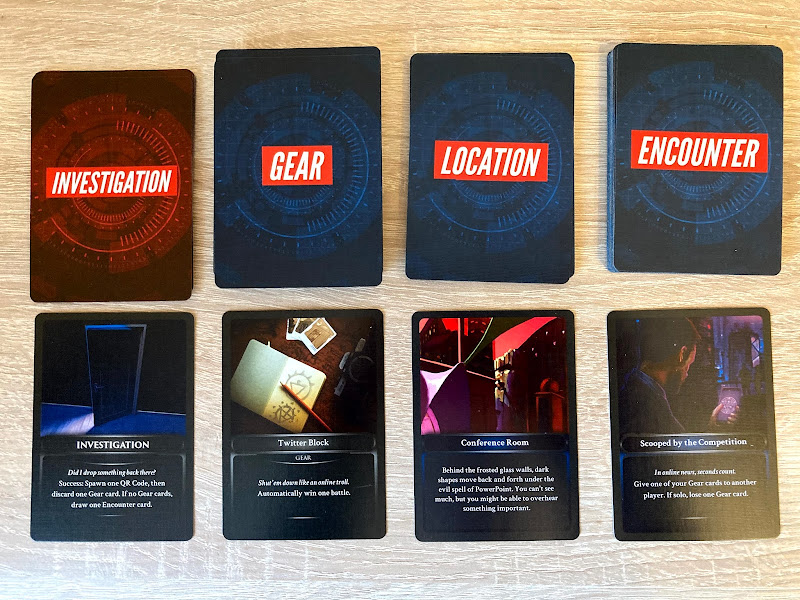 In Techlandia, you play the role of a technology blogger attempting to gate crash the launch of the TX-1 Smartphone the Apple and Android beater, being hosted by Dexter Ward, and uncover the mysterious and potentially sinister goings on behind it, and the new rare earth element powering this new mobile device. Your aim is to use a mixture of investigation, gear cards and even combat in order to break into the presentation auditorium and win the game, potentially saving humanity from a fate worst than death in the process. 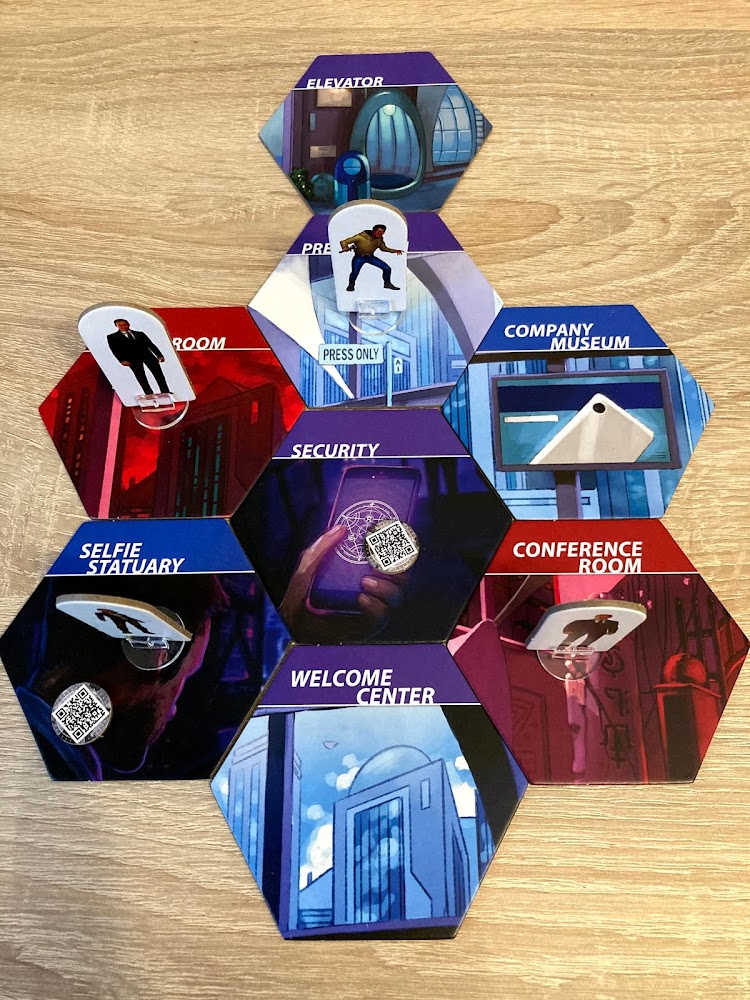 In terms of mechanics, there isn't a huge amount to concern yourself with. You'll move from room to room, trying to uncover a part of a QR code by investigating, which will tell you if you have passed or failed, or you'll fight a Tech Cultist and you'll win a decryption code doing so, or potentially start to lose your Objectivity by taking a reality distortion token. Once you have enough QR codes then you can make your way to the Security Room, scan your completed code and then make your way below. Combat is sorted out through rolling a dice and getting a higher score than your enemy. There's a lot of luck here, because for most actions you are drawing cards. The reality is that Techlandia is a fairly stale and pedestrian affair based on these mechanics alone. If you look on it at face value then you might not want to consider even bringing Techlandia to the table. 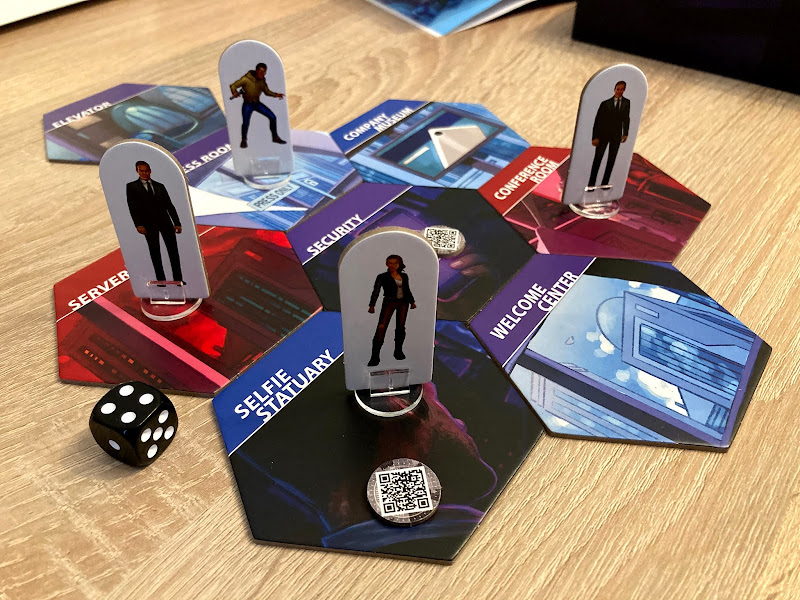 If on the outset, Techlandia appears like a dry offering, consisting of two pieces of buttered bread, masquerading as a sandwich, trying to pretend it's offering lunch. Then prepare yourself for the juicy filling that makes it all worthwhile, that is the attention that has gone into the world building that surrounds everything. At the end of a round, the Doomsday clock reduces by one, and depending on how far you are on the rounds, then you'll possibly have to read one of the cards form the Lore Deck, that will continue to flesh out the story and bring in new effects to the game. Other cards like the gear cards have little slices of flavour text over and above the simple direction of what to do including very in the now references. 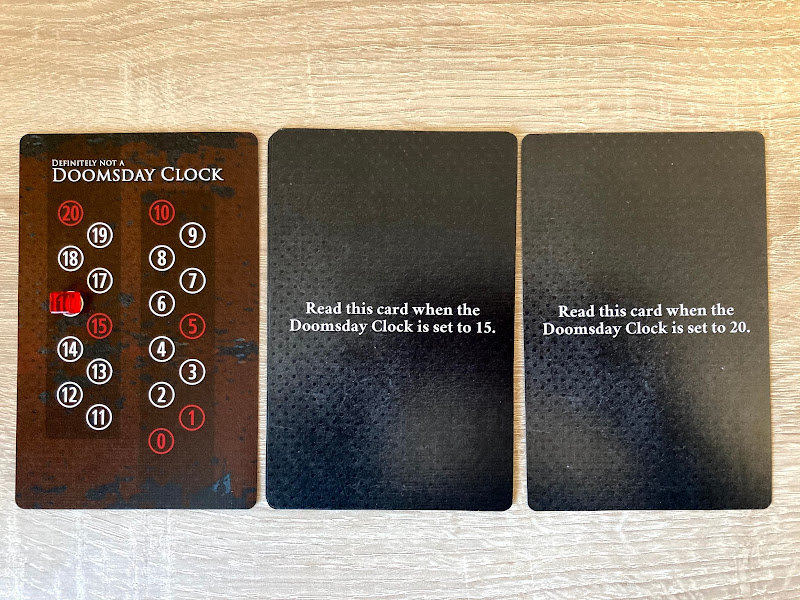 There are little snippets here and there that show how much the designer is wanting to involve you the world they have created. Mentions of Twitter blocks and CBD oil in the gear cards will make you nod in recognition. The enemy cards are huge and imposing and take up some decent table space. Your status board is card which has been printed out to look like a phone, and you mark on it your progress as you go, which in itself is an interesting observation on how we track everything on a mobile nowadays. You'll have to deal with fanboys if one of you loses their grip on reality, ending up getting in the way and just being annoying. It's an interesting additional mechanic that will make you smile but not frustrate. It can be strongly argued that the art is far too samey, but its interesting how all the Tech Cultists look exactly the same and it fits in with the theme, as if they are all wearing what they think will disguise their otherworldly truth. There is a lot of imagination here from someone used to stretching their creative writing muscles, and it does bring something much needed to the game. Everything in the rule book has been written from the angle of someone who really wants you to enjoy what they've created. There's a part in the rule that had me cursing Dan until I figured out it was meant to be like that, planned to be explained that way and it again endeared me to the game that little bit more.

It won't take up your table space as it is designed to be compact and smart. It won't take up too much of your time as you'll be able to play through a full game in an hour or less. It doesn't have Cthulhu levels of complexity that will melt your brain before you grasp the basics. For those wanting to play it solo, the engine and the game work just as well with one as they do with up to four.
Techlandia isn't here to change how we play games, it won't win awards for innovation or mechanics. It does an excellent job with the theme and the world building it has created. It is a great example of a game that you could sit down in front of people who are relatively new to the hobby and know they would have a decent fun and immersive time. Sometimes you get that someone had a hell of a good time creating something for other peoples' entertainment, and with Techlandia, this is one of those times.

You can find out more about the game by going to https://danackerman.com/techlandia
If you would like to support more written pieces on the blog then please consider backing us on Patreon. www.patreon.com/werenotwizards
board game review Dan Ackerman Review Techlandia