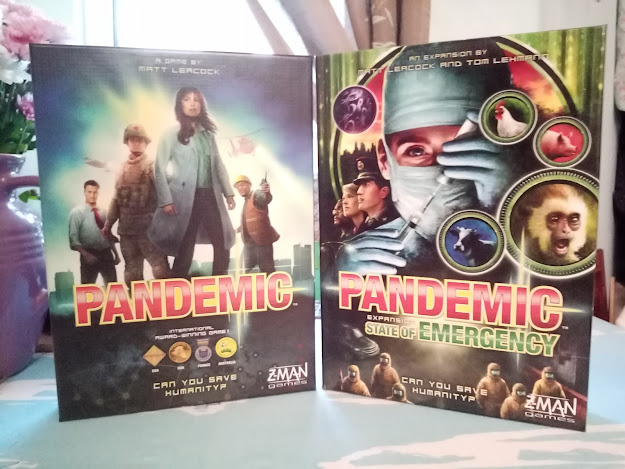 My partner and I are huge fans of Pandemic, so much so that we took Pandemic Legacy Season 1 on honeymoon with us. We used to play it a couple of times a month and got pretty good. However, for whatever reason we haven’t played for a while. But with all this time on our hands we, maybe foolishly, decided to try State of Emergency.

Pandemic is a co-op, action management game, where players use character cards with special abilities to try to cure 4 different diseases which are rapidly spreading across the world. The State of Emergency expansion increases the difficulty of the game by adding Emergency Event cards into the event deck, giving a nasty double whammy with the Epidemic cards. The Hinterlands extends the playing board and can be infected through the rolling of a dice and outbreak to connected cities, and the Superbug Challenge which we didn’t attempt. To mitigate this there are 5 new character cards and Quarantine markers, which count down instead of infecting the cities they’re attached to. 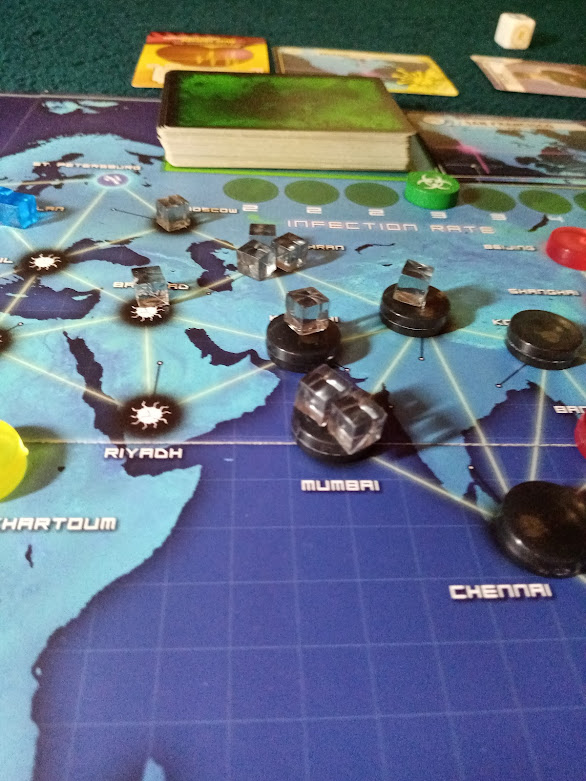 As I said above, we got pretty good at Pandemic and had to add house rules to encumber ourselves, on top of the difficulty raising elements from the other expansions, mainly involving not playing with the Medic and using the Dispatcher instead. Maybe we’re just out of practice but State of Emergency is so difficult. Even without playing with the Superbug Challenge which notches up the challenge level, we still lost twice in a row. The first time it wasn’t particularly close; despite taking the Colonel who can place Quarantine markers remotely we mismanaged the Hinterlands which suffered an outbreak, then chain a further chain outbreak. It’s worth noting that in the rules the makers claim that being able to more easily share knowledge in the Hinterlands makes it easier to find cures. This was not our experience, the Hinterlands just proving to be another nasty little area that can outbreak. The second time we played was irritatingly close, if we’d had one more turn, or one city hadn’t outbroken (it was a coin flip which to Quarantine and we got unlucky) we would have won, but that’s the way the cards go sometimes.


(SPOILER ALERT for Pandemic Legacy 1 and 2)
State of Emergency was published in March 2015 and Pandemic Legacy Season 1 was published in October of the same year, which is interesting because it suggests that they were designed around the same time. Legacy incudes the critical ability to quarantine cities, while one of the diseases becomes incurable and can only be cured through the creation of a vaccine which shares similarities with the Superbug Challenge. What’s possibly more telling is that Hinterlands didn’t make the cut into Legacy. It’s an interesting concept and certainly changes gameplay; and a land in the middle of the ocean with its own rules does make an appearance in Legacy Season 2.

There was an added bit of significance in playing Pandemic during lockdown, but it didn’t detract from the enjoyment (if you can call having your ass handed to you “enjoyment”). For a long time we’ve had in-jokes to do with Pandemic, normally involving shouting “not Ho Chi Minh city!” whenever it was mentioned on the news, but it was a little close to home seeing a disease spread over the world with very little you could do to stop it. Again, there was an added relevance in choosing to quarantine certain cities. However, I’m sure if/when we win there will be a certain cathartic feeling of pleasure knowing we saved the world from the situation we’re currently facing.

As with all of the Pandemic games, it has great representation when it comes to the character cards, the board is centred on Africa rather than the U.S. or UK, it has a well written and easy to follow rule book and a high level of component finish. It’s not an accident that it’s as popular as it is or that it’s held up as a fantastic gateway game. If you’ve gotten “too good” at standard Pandemic I would strongly recommend getting State of Emergency, it really adds another few layers of difficulty which will increase the playability and longevity of a favoured game. Can you save humanity? Well, maybe after a couple of weeks playing, you might be able to

You can check out the other games Z-man Games makes by going to https://www.zmangames.com/en/index/
If you would like to support more written pieces on the blog then please consider backing us on Patreon. www.patreon.com/werenotwizards
board game review pandemic