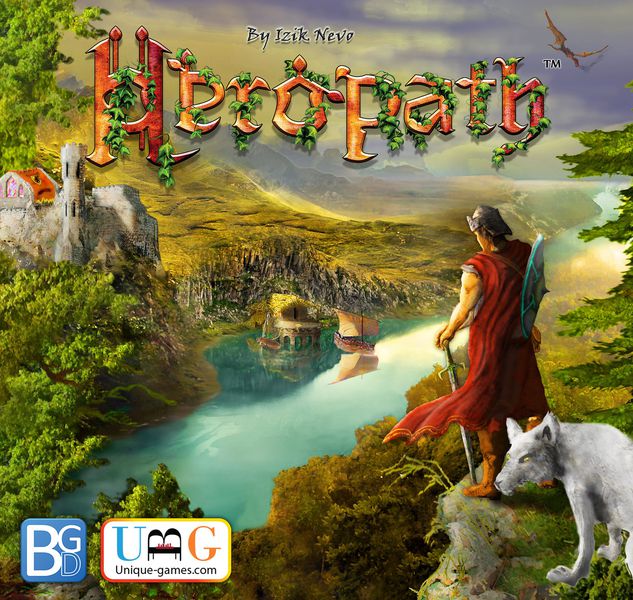 If you're a hero with a path, you can be pretty sure that a very large, angry dragon is waiting somewhere ahead, ready to turn your body to a blackened husk. Such is the life of a wannabe hero. Our hero (you) finds themselves in an unnamed land dominated by said dragon. Your job is to wander the land gaining arms, magic, abilities and various other items and boons that will hopefully make you strong enough to fight the dragon and ultimately slay it.

The game allows you to choose from one of 4 familiar classes - Elf, Dwarf, Warrior or Sorcerer - and who you choose determines your stat line, and how much gold and food you start with. The stat line comprises the usual array of categories associated with a fantasy style game namely Experience, Vitality, Faith, Wisdom and Skill. Cards are then drawn from various decks and in the solo game you get to keep 6. These will comprise weapons, armour, abilities, magic etc that you may have at your disposal in the game. These items are also available via an in-game market as you progress. 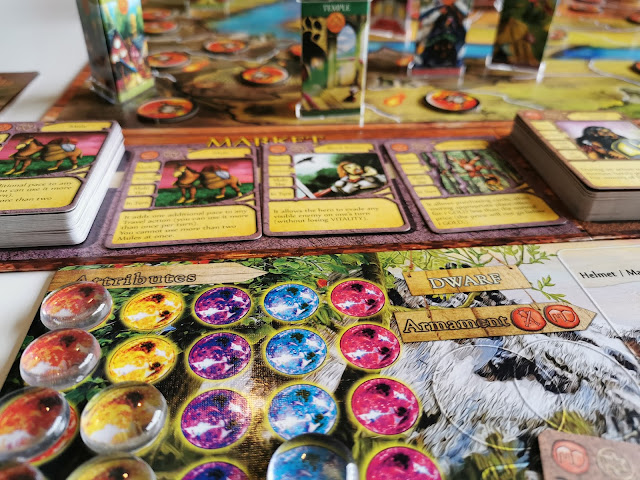 I say may, as I found that some games I was very unlucky with the cards I was choosing from, leaving me with a weapon that required two additional skill points that I started with. Similarly with magic I found I wasn't proficient enough in the required categories to use the items. Abilities were generally fine though, including things like re-rolling a die during combat, or paying 2 less gold when using a buy action at a location. These cards definitely felt the most useful early on while I scrambled around looking for extra skill points.

In the solo game, the map is awash with enemies. There are 6 types, which are noted on the board alongside their base strength before any dice rolls are added. Combat was pretty simple. You take the enemy strength then roll the two red dice and add the pips to their total plus the current Scale of Evil (which is essentially the round), then add the total of your hero's attributes and roll 2 yellow dice and add the pips to the total to your attributes, then add any bonus strength from any of your gear. If you win you gain XP and if you lose you drop a point of vitality. 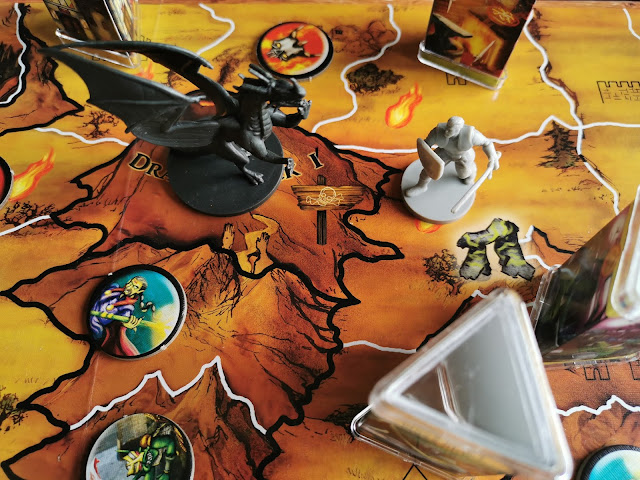 In a turn the player is afforded 5 actions, with combat being one possible action (if you end a move on an enemy space). There are also locations all over the map in the solo game and visiting these can provide many benefits to the hero. You can buy new cards, heal, increase skills - pretty much anything you can think of in the game can be done at a location on the map. The difficulty will be getting to that location. Each location will have two possible actions you can take there.As these locations are randomly placed it can take several turns to reach one you really need if you find yourself under-powered early on due to a lack of weapons or armour for example.

You can use a ferry, which is located near the start, or one of several hot air balloon sites and move around the map that way, with certain restrictions and die rolls coming into play. In the game I had selected the Warrior I found I needed to gain skill points quickly to be able to use a sword and helmet and it took a few turns trying to plan that out to reach locations I needed. I was initially frustrated with the starting cards I had and the low stats that restricted my usage of gear I had, but I did enjoy the planning that I had to do to try and mitigate that and build up the character's stats that would unlock these items for me. 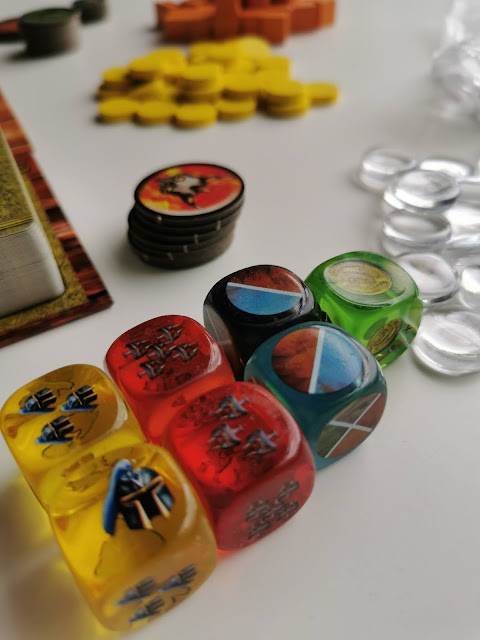 There was also a rest action that was useful, which allowed you to recover Vitality and roll a die that could yield gold, food or extra cards. Once I found my feet a bit, I tried ending my round on the rest action to regain any vitality lost in combat and to gain food and items. In Solo mode, the dragon takes a turn every even numbered round. A die is rolled to determine the terrain type the dragon is going to scorch as it flies over the map. If you happen to occupy one of these spaces then you suffer damage. You can end your turn in a safe space to avoid this, which is useful as the dragon repeats this process twice, before settling back onto a mountain.

The aim of the game though, is to smite that dragon. To do so you have to occupy an active flare adjacent to the mountain the dragon occupies. In doing so you will suffer damage and loss of vitality so its important to be as tooled up as possible as the dragon starts on 15 strength before various boosts and die rolls are added. He's a tough nut to crack. 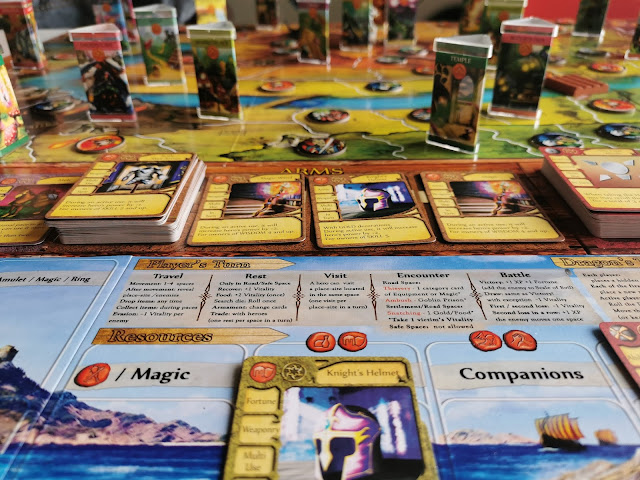 Overall, I found the game fun. The randomness of the card draw at the start was something I felt happened each game I played and I did find it difficult to get going in every game I played. The theme was a little light, bar the usual tropes of a fantasy setting and I feel like the game would benefit from a bit more lore and background, but that's not a major gripe. Component wise the game was also fine. Nothing was especially startling. The board was nice and big. The player board was well set out, although could get busy if you reached the hand size for each category and it wasn't easy to see all your cards at all times. The reference for the locations was a nice touch as it allowed you to have on hand what actions you could take at every location.

Playing it solo it felt like a puzzle to solve before having a last throw of the dice when you decide to take on the dragon. This aspect I did like. In each game I felt like I was arriving at the pivotal point of the game when I wanted to try and take down the dragon at a different time. This speaks to the randomness of the cards a little, but it also makes it a bit more tactical. All in all I thought the game was good, but in a crowded corner of the board game market I'm not sure good is good enough.

If you would like to support more written pieces on the blog then please consider backing us on Patreon. www.patreon.com/werenotwizards
Heropath: Dragon Roar Review