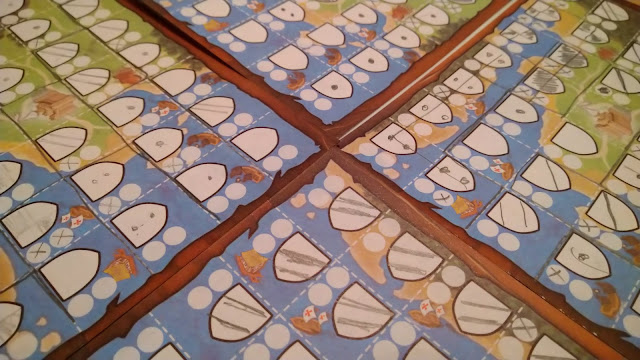 The original Kingdomino was a huge hit in our household, and is one of those games that gained a coveted position away from my collection of heavier games such as Dinogenics, Root and Scythe, and earned a special place next to Super Rhino Hero Battle and Gonuts For Donuts in the cupboard in the lounge. Kingdomino is one of the games that we'll continually bring to the table when we want something familiar and fun, but it's also been introduced on several occasions when we've been showing friends and relatives games away from the normal familiar assortment, usually to a lot of success. We've not had the pleasure of trying Queendomino to date, but I've heard that its like its sibling, but with strategic additions, and this concerned me as to whether it would be as accessible.

Jump forward a year, and we have another player in the Kingdom.. ino.., Coiledspring have taken the plunge and licensed Kingdomino Duel in the UK (United Kingdomino), which is following a current fashion towards roll and writes, which to me I've played next to nothing, and I've not felt the draw to jump with yet another huge collection of things to add to my collection. It's not because of the genre, it is more because I know if I like them, then they'll be easy to get more of, they'll be inexpensive, and I'll end up with a cupboard full. So its a financial protection decision over anything else. Honest. 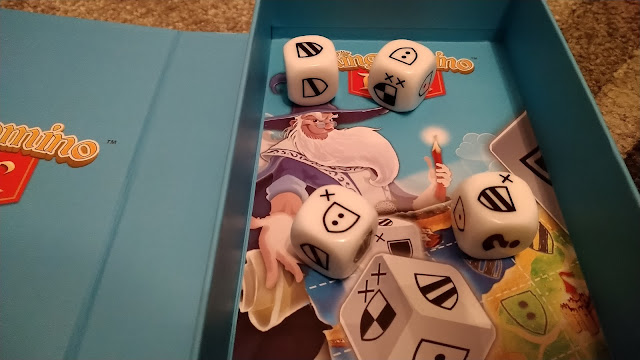 There's a balancing act to take into consideration here, as we aren't just looking at competition in terms what else is available in the roll and write genre, but we're building on the previous successes of the other games in the Kingdomino series. The other thing to be very wary of is whether we are just taking a ride on the cash-in train, and the theme hasn't just been plastered on to a roll and write game.

Kingdomino Duel relies on die instead of numbered tiles, and on patterned shields instead of different types of terrain. Every turn one of the two players will roll all four dice, and then they'll take the first and last dice while the other player takes the middle two, this gives them their domino which they must then mark the shield patterns on the small grid in front of them in one of the spaces. It follows the previous rules, in that the marks need to be alongside each other, and can only be adjacent to either the castle in the middle of your page, or a similar symbol from a previously marked square.
Space is at a premium here, and it's not long before you are having to plan in advance to make sure that you don't end up caught out and unable to play. Certain shield faces have crosses in the corners, and those decide the end score in a similar fashion to the original game, so again you are trying to group as many symbols together with as many crosses in the same area with the aim to multiply your score as much as you can. 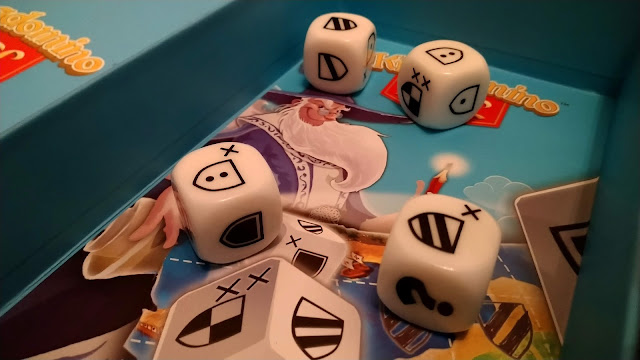 What is interesting is the introduction of the spell book, which keep a tally of all of the shields you have played that don't have crosses, and when you have reached a certain number of shields, you then get to carry out a special move that goes against the core mechanics. So you may be able to split the dice you play instead of having to play them side by side, or flip a dice to a side you need. Some of the more difficult ones to get will allow you a big score bonus which can change the tide of the game. It adds an additional tactical element to the game in order to challenge against the large luck element involved in rolling dice at every turn. 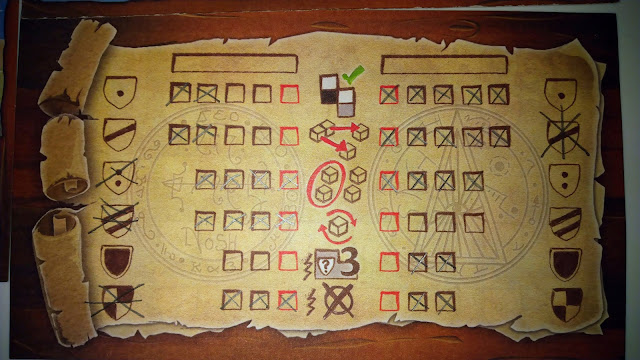 Kingdomino Duel doesn't shy away from its roots, in fact you could argue that this is the next tactical step up from the base game, as it hits you quicker in the thinking space than its siblings. In the original, it was always a matter of time before the higher value lands were played on the table. Sometimes a winning score was about being patient and knowing when to push for first and second pick among the cardboard tiles. In Kingdomino Duel, the simple fact is that the rarer, more valuable sides might never make an appearance. You will often need to play as optimally as you can, based on the now, as opposed to any forward planning. You can argue that all this luck means that some games might leave you feeling punished for no more than being the victim of some badly placed dice rolls, but in all fairness, because its normal to end up both players looking for different shields, it never really feels like that. Normally it's easy to get back in the game, and with the addition of the spells you can play, more options become open as the game progresses. 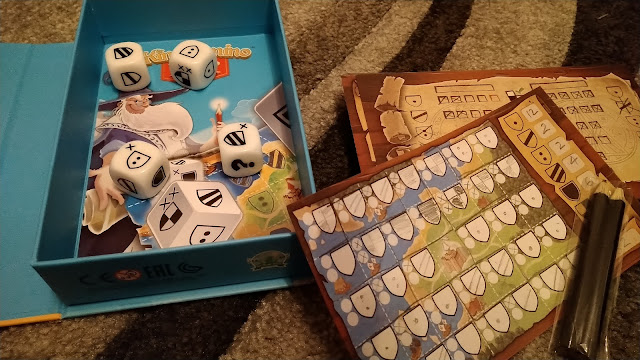 I wasn't expecting much from Kingdomino Duel, I certainly wasn't expecting something that was so easy to learn as well as teach. I've now played it with several people who vary in their exposure to board games, and none of them found it difficult the grasp the basics, but all found it satisfied the level of complexity that they were looking for. Even the most experienced player found it allowed a small level of tactics and planning as they played, slightly more than what they found when they played the original vanilla Kingdomino. Its small enough to be shoved in a bag and taken on day trips. It only needs space to allow you to roll the dice, which I found I could do by using the main box. For those looking for a filler game that offers the opportunity to get you thinking, then Kingdomino Duel is certainly worth consideration. I dunno how it compares to other roll and writes, but I'm now terrified I'm going to become a collector of writing pads and small pencils..

That gaming nightmare, that horrific situation where your enthusiasm for something leads you down the track of almost being an apologist, where not even your energetic cheer-leading can save you from the faces of the truth staring back at you. That no, you weren't exactly lying, but you weren't exactly telling the truth either, and like payment protection from the turn of the century, they feel slightly missold, and might be searching for compensation. I blame myself, because there were five of us at the table, and two were reading the new rules for Adeptus Titanicus, with its tables and statistics and huge numbers of rules, and hardback finish and robots for goodness sake. I decided to teach the rules and sit out, not wanting anyone to miss out on the chance to control a team stealing gems or taking out their rivals.  So I sat instead, reading through a rule book of another game needing a critical eye, making sure the quartet were on their way to joy and excitement