Sub Terra II - Kickstarter Preview - The Lava with Everything Version. 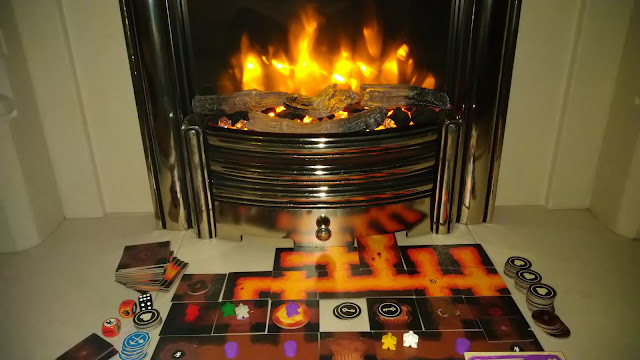 The Sub Terra II campaign finished almost a month ago, and garnered almost £300k in funding, we unfortunately received our copy of the prototype far too late to have the time to give it a decent run through, and to therefore give it our final thoughts. We do however like to make an entrance, and we like the way we write good, and we think you might like to look at our good writing too. So here it is.

For those unfamiliar with the campaign, Sub Terra 2 took the mechanics of the original highly successful but troubled Sub Terra cave exploration KickStarter game and has pretty much given it a taste for treasure and high adventure and set it on its way. 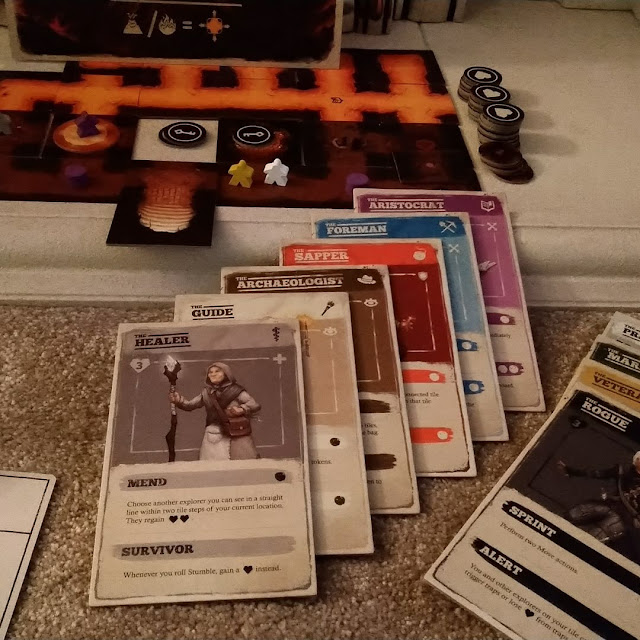 Inferno's edge is about exploring, and finding keys, and reaching the inner Sanctum to grasp your own slice of fortune and glory, and then get out of there as quickly as you can, avoiding the onslaught of an angry lava. There's a level of randomness and unpredictability to Sub Terra 2, and it's more about being reactive than pro-active, starting from blind selecting the next tile to be laid, to dealing with the triggering of a trap or activating one of the Guardians that look after the tunnels when the hazard dice is rolled.

Luckily, at your disposal is a huge array of characters and explorers that bring their own skills and passive abilities to the adventure. Some will allow you to avoid damage caused by traps, others will passively heal you if you stumble, others will allow you to push through tunnel blockages with ease.  Part of the fun of ST2 is selecting your team randomly, and dealing with who you get to help you grab the treasure. With such a multitude of players, you'll consider visiting again on a regular basis to see which combination will work the best. The choice can be daunting, but at the same time, there isn't an overall master ass kicking team that will clean the cave's clock with ease that I've found so far, and you'll never really feel like you've grabbed the crappy end of the stick if you are playing what seems like a sub optimal team. You only need to watch out for the large shouty person at the table telling everyone what to do, (i.e. Me) then realising they have caused everyone to go in the wrong direction (again, Me).  In terms of ease to learn and ease of play, its actually a doddle to pick up and just get going without much getting in your way of diving in and a quick rule refresh as you go won't hurt the gaming experience. 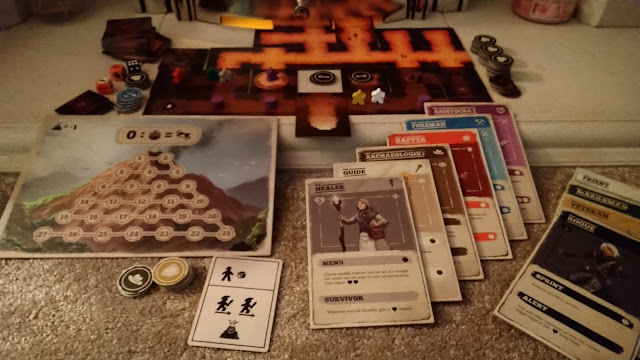 The tension sneaks up on you, and you pass the build up in dribs and drabs, a Guardian spawn point here, a collapsed tunnel there, a dodged trap, all on the way to collecting keys and breathing a sigh of relief as you get through. Ten minutes later, it turns into running and shouting as the tunnels erupt in lava once you run out of time, you gain your prize and all of a sudden, those well managed dodges and those conceited chuckles to yourselves become a real big problem. It's one of the wonderful pay offs that Sub Terra II do manage to successfully achieve, but the randomness of the drawn tiles can either lead to a simple stroll out of the tunnels, or a grating frustration of defeat snapping at your heels, in a situation that was constructed completely out of your control. 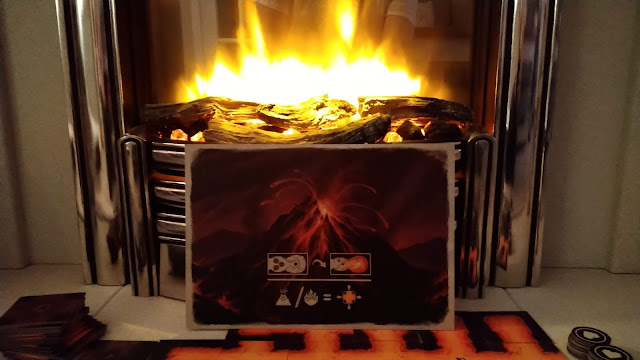 I'll be honest here, I was kind of hoping that ITB scaled back the number of stretch goals and various combinations on offer in the campaign, as the original Sub Terra campaign was a victim of bloat caused by success. Additional logistics ended up with delays and errors, and ultimately the bruises on their reputation set them back in their growth. Looking down the list of unlocked stretch goals, I'm seeing soundtracks and postcards and graphic novels, and these all look like they do nothing to the game experience. Add on to it a huge a la carte menu of optional expansions, multiple extra purchase options, and I can see the potential for more pits being dug than tunnels being explored. It's strange, because intermixed with the additional 'bloat', there are some lovely visual extras that add a bit of polish to what is a fun game. I kind of wish that ITB had the confidence to run with 75% of what they had planned, drew a line under it, and left it at that. I'm hoping lessons have been learned from the previous campaign, and that production is smooth and communication regular.

This may be one of the reasons on whether you decide to jump in with a late pledge, and as for the game itself, constant defeat doesn't always tie in with enjoyment, and unless the tension of the moment is balanced, some of you might decide to walk away and try a different temple altogether. So overall, for game reasons, then if you get a chance to play Inferno's Edge, then it's certainly a great waste of a couple of hours of your time. Even to see if it's going to scratch the 'follow up Sub Terra itch' you feel you've been missing. There might just be treasure there..

We were provided with a preview copy of  Sub Terra II
If you want to sign up to a late pledge, then please visit this link
ITB have appeared on the podcast on several occasions
We were not paid for this preview.