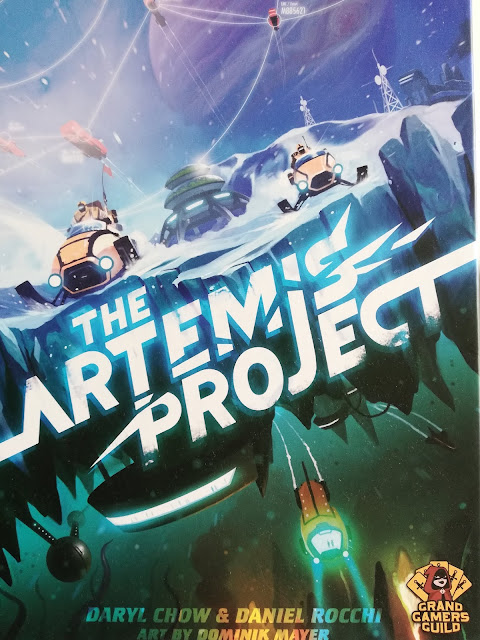 It's the year 2348, and rather than leaving Europe, we find ourselves going to Europa. The Artemis Project sees players take on the role of Stabilizers, attempting to create the most successful colony on the barely-habitable moon, Europa.

Players will look to build structures both on land and in the ocean, recruit skilled colonists and send them out on expeditions and have them staff the buildings. Players will also gather resources which are used to pay for colonists, buildings and shelter, as well as potentially scoring victory points at the end of the game. 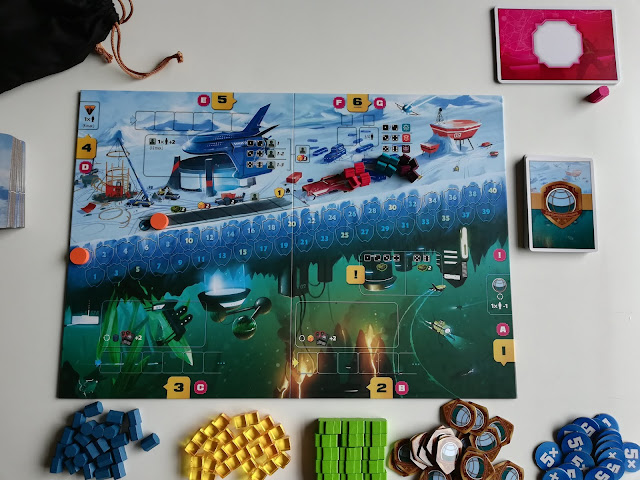 Before the box is even open there's a level of anticipation based purely on the box art. It's very nice and nails the theme perfectly. Inside and it's not too shabby either. The 4 classes of colonists all have a unique meeple shape and colour, making it easy to identify them. The minerals, energy and toolkit components are good, if not spectacular. There are also building tiles, coming in two flavours, Ocean and Surface, a deck of Expedition cards and a deck of Event cards. Completing the lineup are some expedition badges, event and phase markers. Each player also gets a set of dice and player markers, as well as a player mat for storing colonists, resources and expedition badges earned.

The game starts with 6 Event cards being selected at random from the deck and the top card being drawn. This card will display a letter from A-G, or ! (which is an immediate effect). The event marker is then placed on the corresponding letter as a reminder to trigger the event on the card during the resolution phase. The event could be negative as well as positive.

The game, which is played over 6 rounds, starts with the placement phase. Players roll their dice to form their dice pool and place them one at a time, starting with the first player and moving clockwise. This is where you need to decide how you want to play the round. There are 7 locations on the game board. Area 1 or Basecamp is the current expedition. This card is drawn from the expedition deck and determines how many resources will be in play for the round, indicated in the top left corner of the card. This amount of each resource is added +2.

2 and 3 are Vents and Quarry - this is where the players will vie for resources. Vents give energy, while the quarry provides minerals (vital for building structures). The mechanic used in both areas is called Exposure. Essentially, each subsequent player to place a die here places it to the right of all existing dice equal to or lower than our own. Area 4 is Gantry. Here tiles are drawn from either the Ocean stack (rounds 1-3) or the Surface stack (rounds 4-6). Players bid on these structures by placing a die on it. The highest bid wins the building with the winner paying minerals equal to the pips on their winning die. 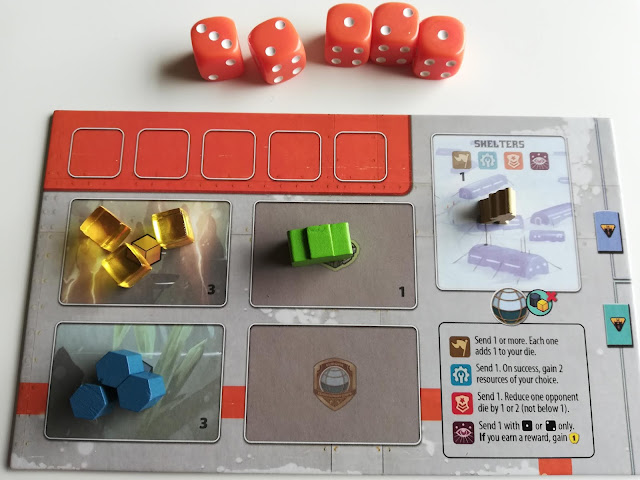 Areas 5 and 6 - Doorstep and Academy - are where you can recruit colonists. 2 colonists more than the player count are drawn at random and placed in the Doorstep space. Players can bid using the Exposure mechanic but will have to pay 2 energy per colonist that they recruit. The Academy only has two spaces, so will be much harder to get to at higher player counts. This area starts with 4 each of the Stewards, Marines and Engineers. Players place a die and any type of colonist they already have and depending on the value of the die can swap that colonist for one from the pool. Unlike the Doorstep, the Academy does not get refilled at the end of the turn, so this is a finite resource to draw upon.

There are some nice touches in the game. Expeditions require the total of the dice committed to the space to match or better the value on the card. Some cards come with multiple rewards, from victory points to colonists to buildings, so I found myself drawn to that a lot. The player with the highest value die (in the event of a tie, the person who commits to the expedition first wins) gets to claim the spoils offered by the card and also gets an expedition badge which will mean victory points at tie end of the game. Where there are multiple awards on the card, they choose which to claim and the 2nd player gets the other reward. If any other players were committed to the expedition but did not get a reward they are compensated by moving a space on the Relief Track. This is a secondary track to the main scoring one, where failed dice placement can be compensated with resources, toolkits, colonists and if the end is reach, a victory point.

The game was essentially trying to balance actions and maximize the return on your investment. Ocean buildings allowed you to build resources in addition to your use of Vents and Quarry and once the game gets to round 4, the surface buildings were about setting up your end game scoring. I enjoyed the game. Aesthetically is can hold its head very high. Gameplay wise I found it entertaining, but I worried that it may lack longevity. The strategy element is there, but at lower player counts and solo I found that I could pretty much do what I wanted and not be hindered in my goals too badly. I worry that I probably can't get it played at a full player count too often and as a result would probably reach for something else from my shelf to fill the dice placement shaped hole. At the end of the day though, I do like dice placement games and this is a good one, just not a great one for me. I do think it will be well received though and I would certainly not discourage people from picking it up and playing it.

Disclaimer: We were provided a copy of The Artemis Project for review,