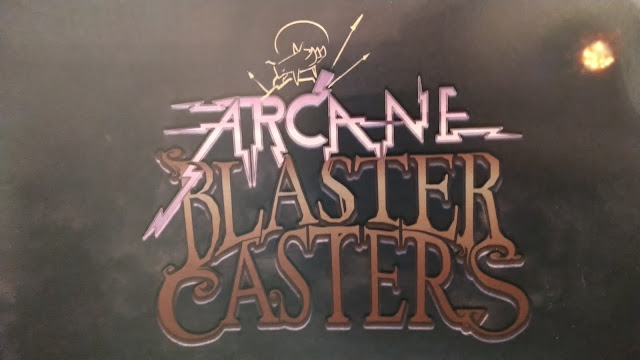 Isn't fun a funny concept? The act of fun and the impact of fun itself, could be said to have at it's base level, very little practical use. It won't keep you warm on a cold winter's night nor put food in your hungry belly. Fun isn't always something that will have a lasting emotional impact, in fact, the crescendo of fun can last seconds as you slide down a snowy hill on a sledge, or witness a punchline of a joke slapping you hard in the face. So while it can make you happy for a while, you could argue that it is something that needs topped up on a regular basis. Fun reminds us that it's okay to stop and allow the ridiculous and entertaining to creep into our lives. Gene Wilder in Charlie and the Chocolate Factor states importantly that "A little nonsense now and then, is treasured by the wisest man."

I've often tied in fun and nonsense together, as I've always tied in laughing, grinning and noise with fun. Board games are a dual faced funny beast, in that they can sometimes hide fun under mechanics for hours until a pay off, where the triumph and grin of the winner bring the fun to the table in one huge blast of victory. The fun is landing that pay off, or that victory, after hours of work and normally exclaimed after, that 'fun was had' even though expressions during the game would exclaim otherwise.

Alternatively, games place mechanics in front of you in which the only way to play is to be loud and playful, and the fun validates the game's existence, for without the inclusion of fun, the game crashes and burns.
There is nothing more sad and tragic than a game that promises fun from the start, and simply struggles to deliver, where everyone starts to get embarrassed because its clear that maybe the fun part hasn't been explained well enough. If the fun needs to be explained, is it fun at all? 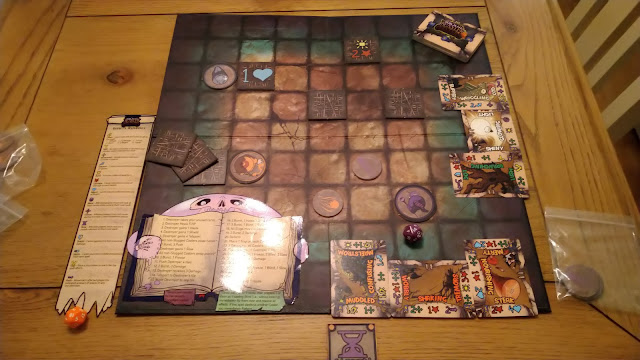 Arcane Blaster Casters from Battle Boar Games, is one of those games in which the components and icon explanation give you the impression that it might fall into the first fun category, that this is thinkage and plannings, strategising and workingsout, and the rule book is fairly thick and chunky with lots of pages.  However, thankfully the font size is big and meaty, and there are reference sheets for you to look at if you don't want to revisit the rule book. You can tell this is a playtesthinkings result, as who wants to be stopping play to check what a burst does when the next person is dying to play their turn? No Wizard.. that's who.
Yes. you read that correct. There's Wizards in Arcane Blaster Masters, and I'll admit I recoiled in horror at first, and even thought about throwing the box and contents on the fire.  As is my right as a critical think person of cardboard games. However, I remember those famous words, KNOW  YOUR ENEMY, and so I decided to put aside my base level lizard reactions and dive in, pinching my nose as I did so. The idea in Arcade Matter Butters is to take out the other scum bucket wizard opponents in the arena and reduce them to their magical slug form. It might be argued that wizards and slugs are difficult to tell apart anyways, so it's good to see that Battle Boar have just come out and made it the feature of the game. It certainly made me happy. It also made me wonder if I had any salt about, and if wizard slugs go the same way as normal slugs with touch of sodium chloride. That is something that requires further analysis. I shall consider this muchly in the future. 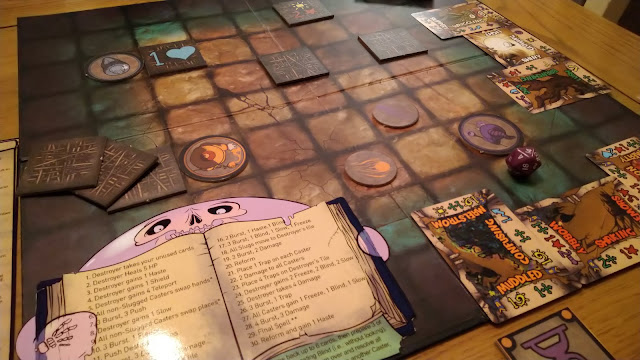 The game is all about casting spells and positioning, so you move about the arena using your four movement points, (two for diagonal moves, you cheeky scamp), and aim to conjure combinations in order to cause damage and status effects to those others surrounding you. However, before you even do that, this is where Arcane Blister Stickers starts to introduce player interaction. You use cards in order to conjure spells, by picking three, or more or less depending on status effects, then placing them in order in front of you. Three edges of the spell cards represent a part of a spell. And each of these edges are marked with an A, B or C, so a spell can only contain A B C and not multiple letters. So you can't have 3 As, or two Bs and a C.  Once you've picked your order, you then get to collect an initiative token from the middle of the table and that decides who takes their turn first. So do you spend less time picking spells in order to strike first? Or do you craft some evil twisted magic designed to destroy your other foes? Some status effects like Blindness mean you don't even get to see what cards your going to use, so you are more likely to be casting first which depending on the luck of randomness can be wonderful or tragic. In the games I played, some held back constantly waiting for what everyone else was going to do, but the danger of planning based on what the arena looked like now, would rarely win out. When you cast, you name the spell based on a combination of words on the cards, and it's everything from the sublime to the ridiculous and it adds that extra element of fun which it could have easily missed out to be 'more serious' 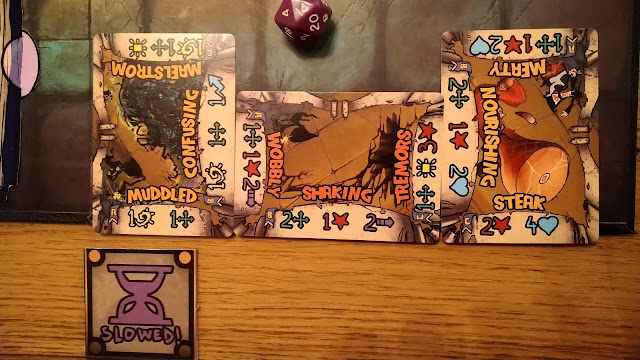 Macaroni Twisted Sister is sometimes just about diving in and causing as much irreparable damage as possible, pushing other players into traps, freezing them so they can't move, stopping them from having extra cards. Being an utter bastard. Which  seems to be sadly lacking in so many games nowadays, where direct competition is often sterile and subdued, and you can often compete against your opponents without even meeting them face to face. Forget that, get stuck in, pick on others like you're meant to, because even in those moments when you feel like your ass just got kicked, Avocado Crispy Twisters has a strange way of giving you a reasonable chance to come back, wands blazing and putting yourself back into the game. Even at the point of losing and becoming a magic slug, you roll a dice to see what fall out happens at the point of your transformation, and it can sometimes do some major paper cuts to those standing over your corpse laughing at you. Kill a caster as a slug and you're back in the fight. Wand out and waving it in their face. All the time, people are shouting spells and promising revenge and laughing when they get their own back on someone. It's organic fun that grows as the match progresses, and the asymmetry is constant and there to be enjoyed as a staple of the game. 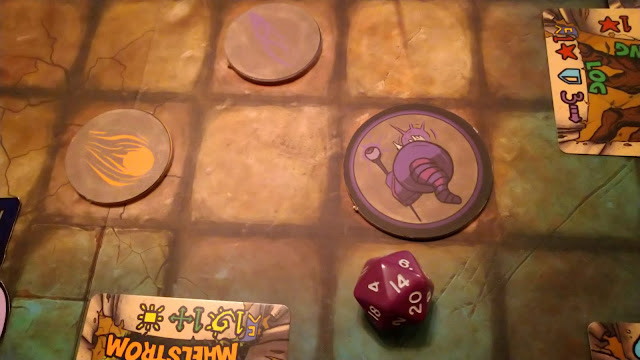 Arkansas Blustery Conkers only loses it's magical sheen at a couple of points, the first is simply that allowing people to be able to respawn, opens the possibility for games to struggle to end, as a last wizard standing can be a close run thing, and in the games where slugs are taking scalps and hats, it can be difficult to get down to the winner. The second is this simply might not be the game for people who are too used to competitive without combative, and it relies on those who like a back and forth, who will declare their spells with gusto, who embrace the fun of the now and all the 'take that' it comes with. Find the right group of similar minded friends, and this game will be one that finds its way to the table on a regular basis. It's easy to learn and to play, it's simple in it's execution and mechanics. Don't expect major innovation, but on the other hand, how innovative does something need to be to bring you fun? It's not going to challenge you with tricky mechanisms and rules to learn. In that case I look forward to seeing what the final version will be when the kickstarter dust settles.

However, as you are aware, there is no way a game with Wizards in it can be recommended by ourselves, and in that case give Ankle Bunion Plaster Cast money on KickStarter to go away.