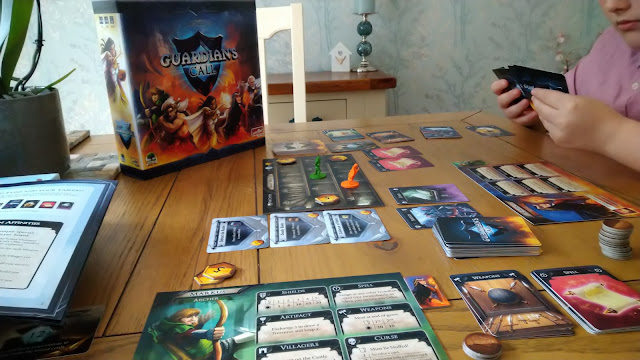 I was in the process of checking some emails on my phone, when a plate was gently placed in front of me. I looked at it in a moment of complete shock and surprise as the person serving my food leaned over towards me, and gently lit the small wire poking out the top of the gluten free sandwich. At the same time, they thrust a set of sunglasses onto to my slightly panicked face, they exclaimed that they were 'delighted to present me with the middle meal of my day' and 'hoped it sated my appetite'. I ushered them away angrily before they started to sing their celebration song only because I would join in. I don't need music at 11.47am on a Tuesday morning, unless the car roof is down, and I'm wailing some horrific pop tune from the 90's at the top of my voice. Not even my fellow diners with their cups of earl grey tea, and ten inch high gateaux, deserved such a horrific audio death. I sat in silence and waited for the sandwich to extinguish itself in a tired fizzle.

Once the flame on my napkin had been put out, and the waiter had again apologised for almost soaking me with the water pistol they kept for such occasions, I finally had the time to examine the veritable feast that had been laid out before me. The sandwich was practically swamped by the crisps that lay next to it, the gentle salad  adding to the attack on both sides, and this had become a war of nutrition on both fronts.
My word. Is this where this fine country had got to, where someone couldn't order something as simple as a chicken mayo gluten free sandwich without feeling we had been awarded the BGG podcast of the year? No wonder we were feeling overwhelmed and exhausted as a kingdom.

Taking up a machete and shovel (provided), I hacked my way through the greenery, and pushed aside the grilled sweet  potato and purple onion rings and a lonely tomato, to finally rescue my lunch and grab it in both hands, avoiding the skewer that was there to keep everything together and try to mortally wound me at the same time. Luckily for those around me, the sandwich was indeed a delight of  flavour sensations. I swear the chicken had some kind of hint of garlic through it, but I wondered if that was the mayonnaise instead. Either way, after I practically inhaled the poor offering to please my stomach gods, I leaned back and let out a sigh of relief and wondered whether I could sneak out a fart at the same time. I look around me to check if there was a small terrier I could blame it on, and decided to hold it in when it was clear there was no canine accomplice to soar on the wind with me. Those in the immediate vicinity sipped on organic fruit teas and chatted yoga lessons and golf handicaps, never realising how close they came to being put off their well garnished choices. 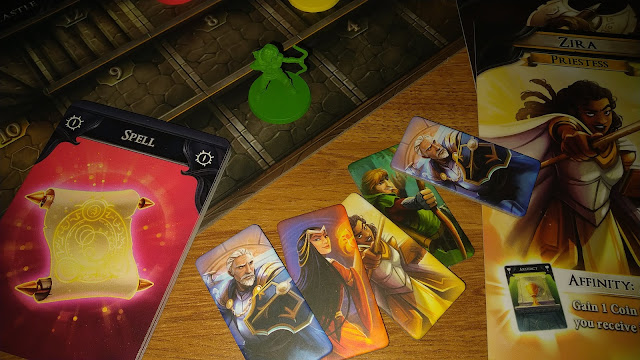 It was a really good sandwich. It wasn't a confident sandwich though.
No, that's not a correct statement. It was almost as if the chef knew they had a great sandwich, but felt that merely putting the sandwich in front of this hungry coeliac would have been too little. They feared I would have stormed into the kitchen and grabbed the poor bugger by the lapels, screaming in their face - "WHERE'S THE STUFF I DIDN'T ASK FOR?" "WHERE'S THE FLUFF?" before throwing them aside and raiding the place to find where they keep the gem lettuce and the double cooked fries. It's all in the presentation I guess, though in fairness I left most of the lettuce on my plate, stealing the rest to feed my rabbit at home. Demanding fluff ball that they are. 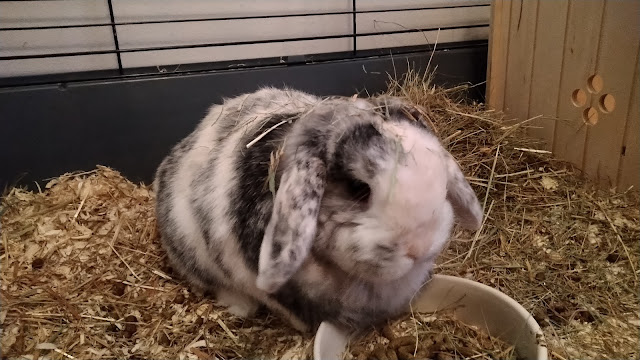 With Guardian's Call, a bluffing and set collection game from Druid City Games, the plate that arrives at the table in terms of presentation is completely covered in salad and Christmas lights, and the Mariachi band is waiting in the wings to strike up a tune. There are multiple character cards that repeat the same core mechanical information except for the single character traits which use one sentence each. There are miniatures that mark where you are in a bonus track and there is a wonderful looking Game Trayz that allows you to store everything that has been added. You can blame it all on the Kickstarter and what the funding allowed Druid City Games to do, but also at the same time, you have to question whether it should have all been added in the first place. 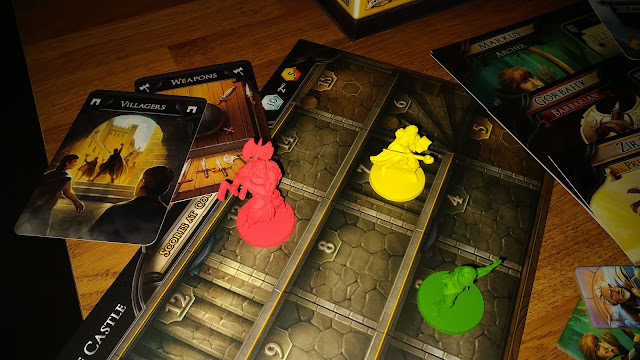 Ironically when you get down to playing Guardian's Call, you'll find a relatively short and sweet straight-forward bluffing game where the idea is to gather as many sets of cards as you can. The art is delicious and stunning as with most of the work craft by Mr Cuddington. The cards offer chances for you to increase your score gradually during the game or bump it up considerably at the end. You do this by offering sets of cards to your opponents, in the hope that they think you are lying so you can keep them to yourself, or hope they guess incorrectly so that you can send some curses their way. The cards themselves are merely the catalyst for the fun and laughter which is on offer here. In Guardian's Call there is a lot of fun to be had because of the high level of delicious interaction you will have with other players. Do you dare to push your luck? Or be conservative in your approach and take tiny bite size chunks from your opponents? Either way will result in stare downs and face offs, people cursing each other, and at each other, and rounds of applause when someone seems to pull off the impossible bluff. Never trust the quiet and innocent ones, and never play someone who needs glasses, but takes them off to look at you when you need to ask them important questions. 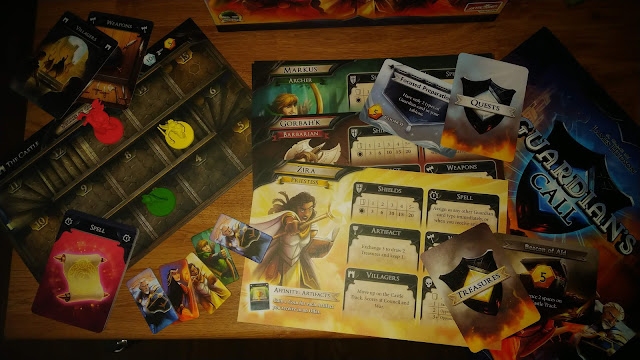 At the latter points in the game, there is the chance to bring on the heavier scoring with a Council meeting, and it helps give you an indication of where the game can possibly finish up before the final War card is drawn and the game ends. Luck has a way of acting like a slippery eel, as due to the random nature of the deck, games can quickly switch for winner to loser, something that some of you might find frustrating. Especially if your bluffing game has been perfect, only to see someone race ahead in the latter stages because they have lost so many Offers they have cash to eliminate curses and score big with hidden treasures, while you just can't get anyone to take you seriously when you bluff, because the cards simply hate your face. 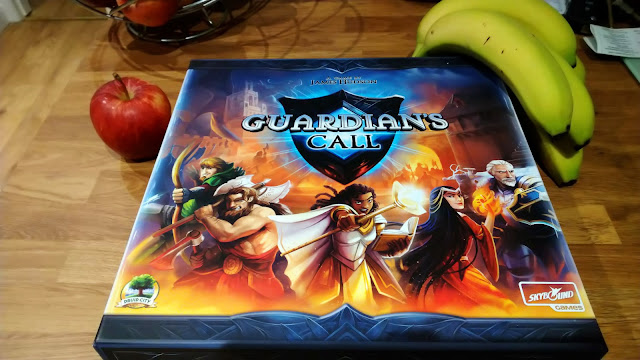 Guardian's Call doesn't hang around either, it's practically asking for the bill when other games with similar table presence are still contemplating the menu. It gives the impression that you're getting medium weight and length, when Guardian's Call would do really well as a great starter to a game night. It encourages interactivity and noise and fun.  It really does make me wonder what a just funded core Kickstarter game would had offered instead, maybe a more compact version with less bling and models and boards and extras. There's a real question here about value for money based on usable components compared to simple spurious extras. There's a really loud party game here, and it's a real shame that there wasn't the confidence to run with what it is, as taken at base value, Guardian's Call would be a fun addition to a game night. However, the extra production might have you question why your tasty sandwich appears to be hidden in a plate of lettuce and crisps when it could simply be a much leaner offering.

We backed the Kickstarter Version of Guardian's Call.
We reviewed the Kickstarter version and the retail version may differ.
You can check out more information on https://store.skybound.com/products/guardian-s-call
James Hudson has previously appeared on the show.