The trouble with it getting closer and closer to winter, is that the duvet is like a huge suppressor when it comes to the urge of getting out of bed. It reaches that optimum temperature of toasty warm and that lovely stay asleep smell that is like it's own special conspiracy opiate. It has you fighting against something that makes you think in your head that you really should make that made dash, fling everything off you and make your way to that shower, across the coldest of carpets, through the freezing room, into the bathroom. That awkwardness as you stand in the altogether waiting for the first signs of the warm water cascading through the icy waterfall hitting the shower tray, while you catch a sideways glance at yourself in the mirror, and either suck in the gut and make an effort, or sigh in a resigned nature to what you've become.
However, give it ten minutes, and you feel awake and ready to fight the day afresh, resolute and looking forward to seeing what your day will bring.  The duvet however remains there, waiting patiently for you to return. Knowing that another time, it might win.

Carbon City Zero is you getting out of bed and making the dash to the shower, but taking the entire duvet with you, so while you feel yourself starting to cool down, the familiarity is there, the smell, the ruffled hair and the sleepiness and while you know you are about to embark on something new, as the same time, you're not entirely leaving what you know behind. 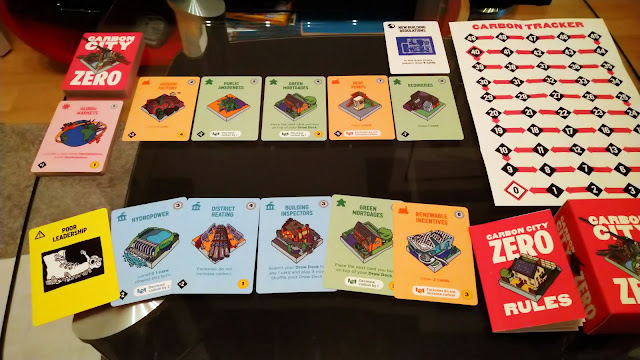 Produced by 10:10 Climate Action, and designed by Sam Illingworth and Paul Wake, Carbon City Zero is a deck building game based around reducing your carbon footprint in the city you run from forty down to zero. You'll start with a minimum power deck, including buildings that increase your carbon output at the beginning and allow you to invest in more carbon neutral buildings and facilities. Buildings like factories will increase the amount of spend that you will have, but will come with their own carbon penalty to have them in your deck. A mixture of government schemes and domestic changes will allow you to reduce your carbon count, and some special cards will link together to produce special effects that might allow you to remove cards to the Landfill pile altogether, or decrease carbon by an additional couple of points. 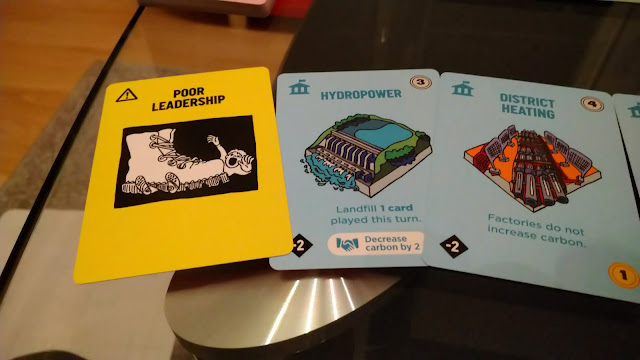 You'll play five cards in your turn, then activate the special rules on each of the cards, which could be a simple as drawing another card, or 'land filling' a card you want rid of. Buying cards has the chance of drawing a global effect card which might increase the had size for everyone, or lower the cost of cards by one. On the opposite side, you might also run the risk of drawing a Snag card, which you have to add to your recycling pile straight away. This will effectively add a useless card to your hand, increase the carbon count and general make the day that little bit more rubbish, and should be avoided if at all possible. After you calculate your income and adjust your carbon level, then play will pass to one of the other players and you'll continue until one of you reaches the goal of becoming the carbon neutral city.

As play goes on it's possible to chain together card combinations and draw cards so that you are removing chunks of carbons points from your city, and so the Carbon City Zero never overstays it welcome, and the end can be abrupt as one player can hit the magical combo and run away to the finish. 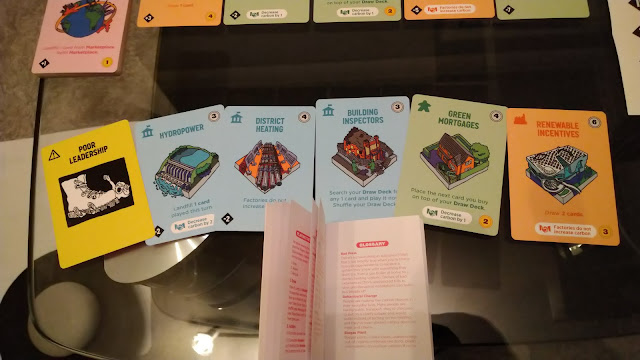 If this is sounding like the structure of Star Realms to you, then you would be right. The influence of that huge cozy duvet of a game is undeniable in terms of the core mechanics, and it means that Carbon City Zero is extremely easy to pick up and play for anyone that has ventured into that deck builder at any point in the last couple of years. For me, it meant I was already settling in to how I could get the best out of the hand that hand been dealt to me, while at the same time dealing with all of the new mechanics and changes that Carbon City Zero offers. The illustrations provided by Tony Pickering are lovely to look at and give the game it's own unique feel. The detail that has gone into each of the buildings is wonderful and striking which makes for a very attractive game on the table.
Just look at those cards, because really are a tiny thing of beauty.

There are things that could be improved though, it's not all sweetness and solar powered lights in Carbon City Zero, but it's to be expected for a game that is still in full Kickstarter development mode. There's a couple of rule clarifications that are required in the final version in relation to the set up and play. There is a distinct lack of player interaction in the game itself, as unlike Star Realms, you're only trying to reduce your carbon impact, and you rarely have the chance to raise it for others, unless that means scrapping cards from the draw selection. It means that when you get you do get to the end stages, a lucky run of draws and link cards can have a player launching off into the lead, and there is very little that you can do about it to mitigate their luck and bring it back to a level playing field.
My only other gripe would be that, in following close to such a familiar system, there is a danger that those who are deck builder veterans might find this initial offering quite tame to what they are used to, and might put it back on the shelf after a few games, waiting for an expansion, but at the same time, this is a game that you can play at the beginning of the night, or when you are looking to waste half an hour while rain stops play outside. 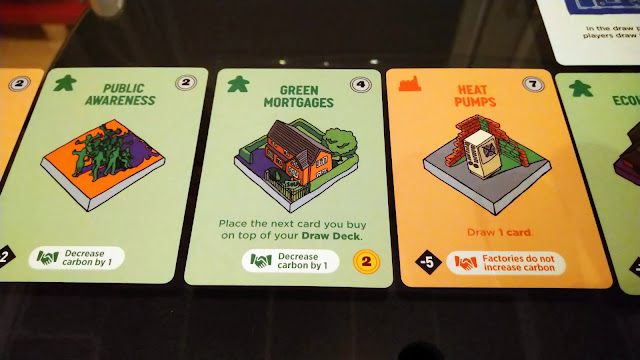 However Carbon City Zero isn't just about being a game, its about helping to spread a message and encourage conversation about the issues raised in the game itself. So in that respect, and backed up with some facts enclosed in the rulebook, it can easily move from being two to four players playing each other to win, to being two to four players understanding a little bit more about why certain actions are helping them reduce their carbon production and how that might relate to what is happening in the city they live in. In any education environment, I can see a game like CCZ be an easy weapon of choice to encourage to beginnings of discussions about these important issues.

I found it fun, easy to get into and understand due to its similar mechanics that I've played before, so for me there was that surrounding comfort duvet, and tied with the stunning art it was a game that I didn't expect much from but very much pleasantly surprised me.
Carbon City Zero is just a game with a message, it's a great fun, easily accessible game with an important message, and it got me standing in the bedroom with duvet wrapped round me, so it's certainly worth checking out when the campaign is live. (That's not true. I was naked)

We were provided with a preview copy of Carbon City Zero so overall design may be subject to change .
Dr Sam Illingworth has appeared on an episode of  the podcast
You can find out more about the game here https://1010uk.org/articles/carbon-city-zero