Cerebria: The Inside World - The Card Game - Review

on July 18, 2019
In a whirlwind of emotions, the little brother of big-box brain burner Cerebria: The Inside World dropped through the letterbox at We're Not Wizards Towers. The standalone card game for 2-5 players is set in the same universe as it's big-box relation. Will the card game fill you with bliss, or leave you feeling gloom? (Quick note: I've not played the other Cerebria game) 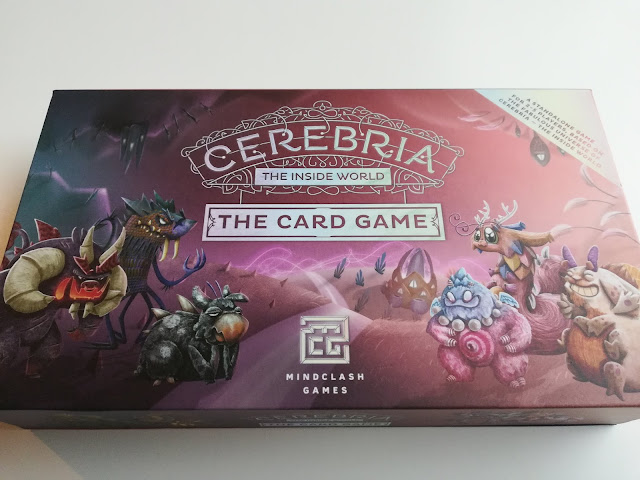 The first thing that strikes you when picking up the game is the stunning packaging. The cigar like box has a magnetic lid which reveals a lovely insert, featuring two slots either side of a metal coin containing cards and identity fragments. It's a great first impressions bolstered even further by the art of Pedro A Alberto, Villő Farkas and Jamie Sichel who were three of the four artists on the big-box game. The art might not be for everyone, but I found it vibrant, off-kilter and a lot of fun. 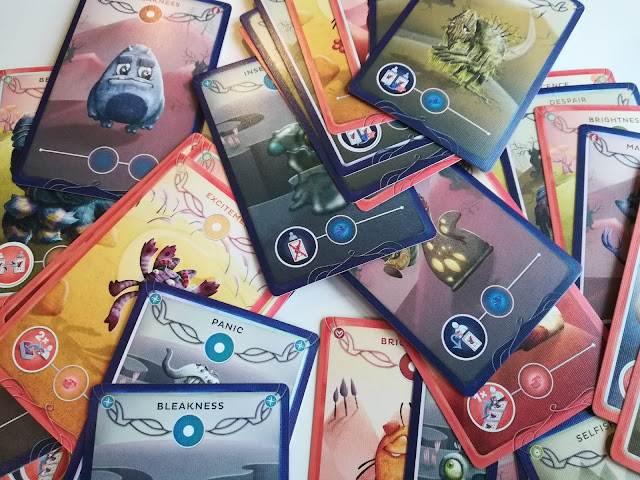 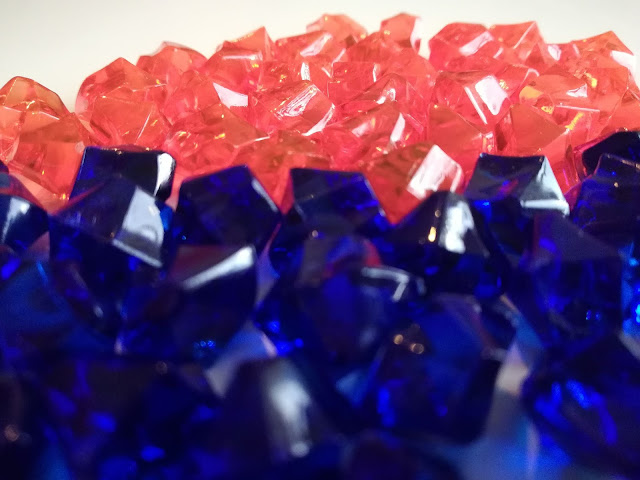 Each of the cards in the game represents an emotion like bitterness, comfort, affection, envy etc. Cards will have either one (a mild emotion) or two slots (a strong emotion) for the Identity Fragments and a Vibe (there are four Vibes in the game which act as the suits of the cards). These fragments work in two ways. Either as a currency which can be spent to trigger actions on the cards, or as points for scoring at the end of the round.

The Mindset must not exceed four cards, but there is the option to discard a card if you wish to play a different emotion. There are also cards called Bleakness and Brightness which do not have abilities or actions available on them but they do have absorb slots. This is a really good feature of the game which will hopefully become clear when I describe some of the actions that are available on the emotion cards.

The game turn for a player consists of two actions. Impulse Action or Invoke Action. The Impulse Action is drafting a card from the three available in the impulse (it is then refilled from the Impulse Stack). The Invoke Action is playing a card from your hand into the Mindset. When doing this the appropriate amount of fragments are placed on the slots. The corresponding action cannot be used until the next round. 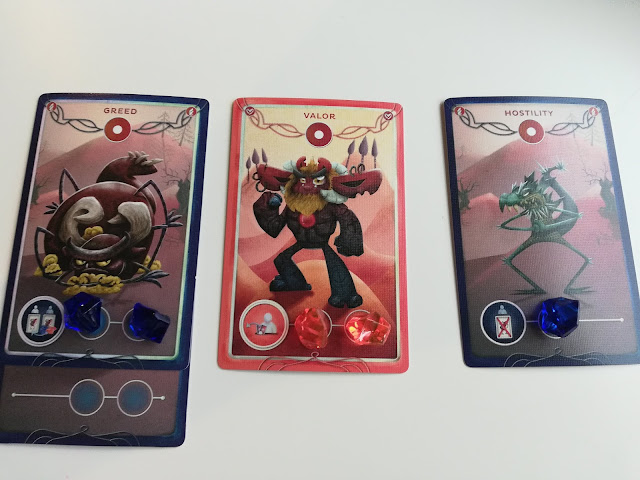 Back to the Bleakness and Brightness cards. These can be merged with emotions of the same affiliation. The Bleakness or Brightness card is placed underneath the other card with the two slots showing, giving the emotion three or four slots. The bonus in doing this is when actions are taken and the fragments spent, these would ordinarily be returned to the supply, but instead these are absorbed and moved onto the absorb slots meaning they are not lost for end or round scoring.

The timing of actions is a crucial part of the game as this is where the player interaction ramps up. There are eight actions in total, ranging from discarding an emotion from a players Mindset, to swapping two emotions between any two players' Mindsets. As you can imagine the skulduggery really takes off when actions start taking place. Not all actions are of a "take that" flavour however. You can draw cards, play emotions into your Mindset and draw cards from the main deck for example.

When any Impulse cannot be refilled from the corresponding Impulse Stack a Revelation occurs and the round ends. Identity fragments are awarded for certain conditions being met like Three of a Kind, Two Pairs etc. with the Vibes that are on each card being what that you have to match.  The very nice metal coin also comes into play at this point. It has a face to represent either Bliss or Gloom and whichever face is showing is the type of Identity fragment you will receive when scoring at the end of the round. 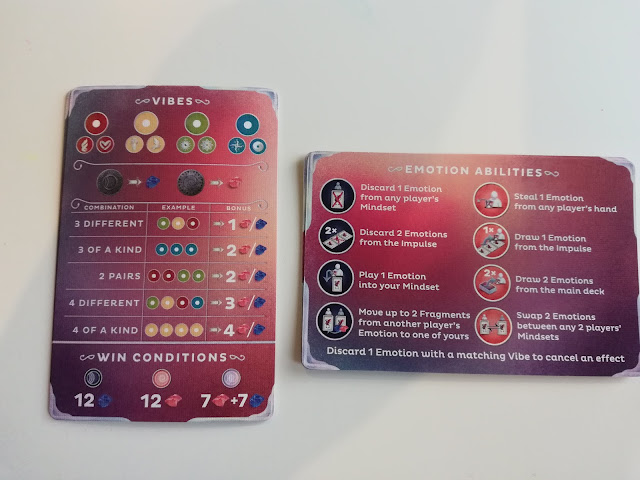 Overall, this game was a real blast to play. Once I got past the terminology (which if you've not picked up on already I'd be amazed) and just got on and played a nice strategic card game unveiled itself. It's really easy to learn and teach and plays at around 20-25 minutes once you get the rules down. The overall look of the game was excellent although I could see some people maybe not liking some of the depictions of the emotions on the cards, but to be crystal clear this wasn't me. I thought it was great to look at. I would say it's a light, filler game and its certainly priced in that bracket but for me you're getting a lot of fun in a lovely package.

Big thanks to Dorka at Mindclash Games for providing us with the review copy of the game.